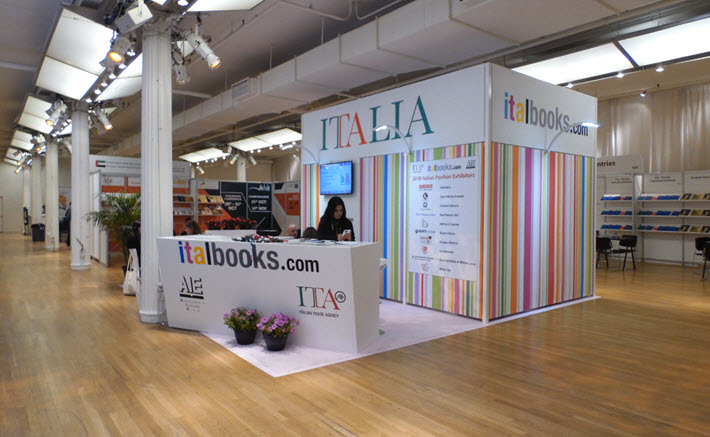 With many hoping that BookExpo and its rights center—moved in 2018 to the New York Rights Fair—can get together under one roof, attendees are being surveyed, organizers say, to assess feedback and plan for the future. 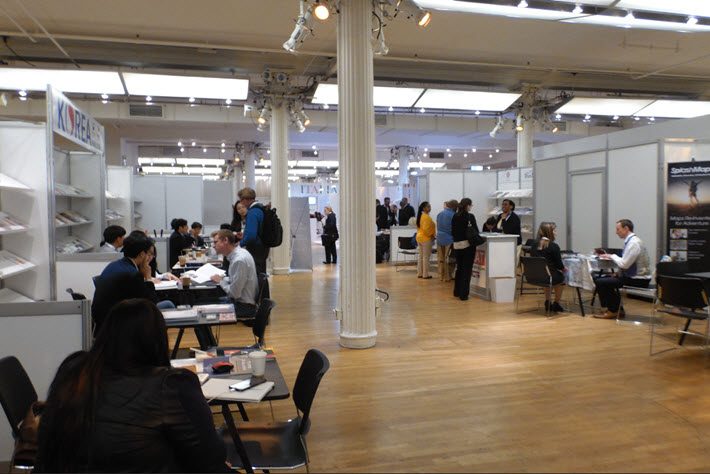 In a release today (June 11) from both organizations, it’s been announced that BookExpo and the New York Rights Fair (NYRF) are entering what’s described as a “multiyear partnership.”

Both events—which ran simultaneously but just over two miles apart in Manhattan, May 30 to June 1, as Publishing Perspectives reported—are being characterized by their respective organizers as great successes.

Produced by Publishers Weekly, the BolognaFiere, and the Combined Book Exhibit, the rights fair is reported by the Book Exhibit’s Jon Malinowski has having drawn exhibitors and agents from 19 countries. The visitor count, organizers say, stands at approximately 3,000 visitors, although it should be noted that BookExpo registrants whose badges identified them as agents, exhibitors or media members were able to visit the rights fair, as well, so it’s likely that some of the 3,000 weren’t direct signups of the rights fair.

Nevertheless, 3,000 visitors for a new event in a remote location from the main event, BookExpo at the Jacob Javits Center, can be considered a sign of good interest. This is reflected in the prepared statement made by BookExpo’s ever-upbeat senior vice president Ed Several, when he says, “The New York Rights Fair is the perfect complement to BookExpo, in that both are shaping and reshaping the US publishing landscape. Rights are important; retail is important. Working together, we go forward to continue to expand the industry and the opportunities associated with it.”

How much “reshaping” of the “publishing landscape” these two three-day events are doing might be debatable. But few might disagree with Several that “working together” could make next year’s partnership go more smoothly than this year’s did.

For the rights fair, Publisher’s Weekly’s George Slowik Jr. is quoted, saying, “With BookExpo, this multiyear partnership agreement ensures that the New York Rights Fair, with New York City as its home for the foreseeable future, continues to grow and to serve the international rights community.”

The context here is what counts. The messaging to the media is that BookExpo and New York Rights Fair are going to survey participants “to ascertain the shows’ respective strengths and better evaluate future opportunities for continued improvement and growth. After analyzing the survey results,” the announcement says, “BookExpo and NYRF will determine the 2019 structure of NYRF, as well as its location. The team anticipates announcing these details later this month after the customer surveys are completed and analyzed.”

There are two particularly good bits of news there for those who experienced these two shows this year: (1) Results of the survey work should be known soon, and (2) the location issue is being examined. 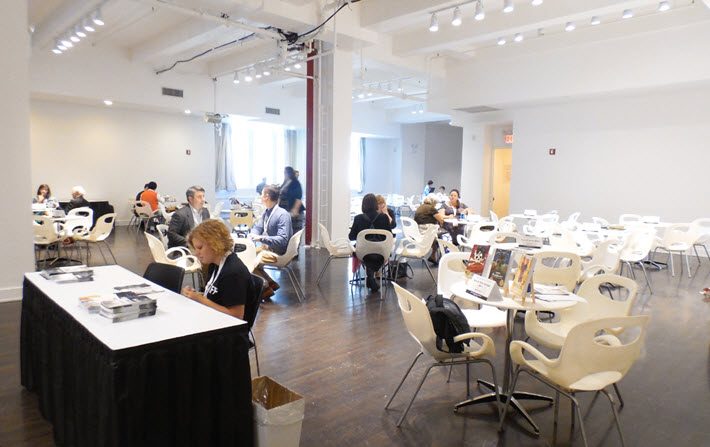 In the rights center at the New York Rights Fair, May 2018. Image: Porter Anderson

Probably the most difficult element of the advent of the New York Rights Fair was its location. That’s not to say that the Metropolitan Pavilion where the NYRF was located is a bad location, in and of itself, In fact, it was called a very good venue by many we heard talking about it.

That’s where the context comes in.

Until this year, BookExpo included an International Rights Center in its floorplan, as do most major trade shows. In many long-running book fairs the rights center is a growing element of a show’s offering. But at BookExpo—still called BEA by many who recall its decades as BookExpo America—the rights center had become a quietly faltering part of the offer.

Many international rights directors have found success meeting American publishers in their offices in New York. And more rights meetings are taking place at the rights centers of the Frankfurter Buchmesse, London Book Fair, and other events.

Meanwhile, Reed focused its attention on its branding about “reimagining” BookExpo as an event devised primarily for the benefit of booksellers. 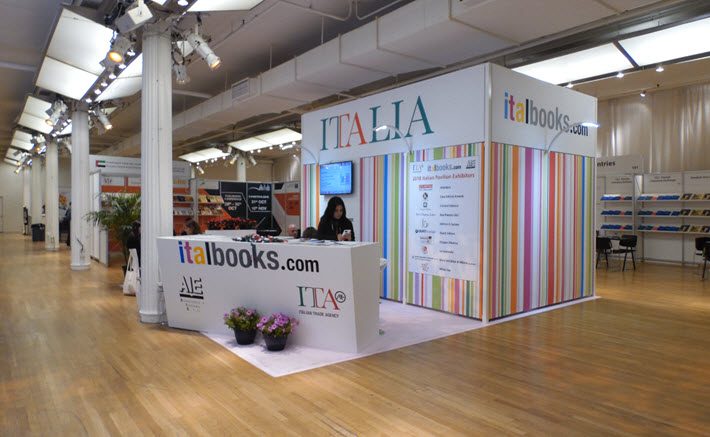 The combined Italian exhibitor stand at the inaugural New York Rights Fair, May 2018. The combined Nordic Countries stand is partially seen behind it. Image: Porter Anderson

What has resulted is what we see now being explored in the two shows’ respective surveys. It’s logical that BookExpo anoint the NYRF as a “multiyear” partner—there’s no sign that BookExpo would want to try to resurrect its own rights center, especially when the show has gone all-in for booksellers.

What was clear to most rights-aware attendees of either or both shows at the end of May is that coming together is a must.

The shuttle bus at times took 45 minutes to an hour to make the trip between the Javits and the Metropolitan. This is no one’s fault. That’s Manhattan on a weekday.

But this made it clear to many that going back and forth to do business and meet with colleagues in both locations was impractical. But the Metropolitan cannot hold BookExpo, however much smaller it has become in recent years, and the Javits certainly has space to spare. The entire southern section of the show floor, once filled with exhibitor stands, was empty this year. It looked like an airplane hangar with nothing but queues for author autographs. 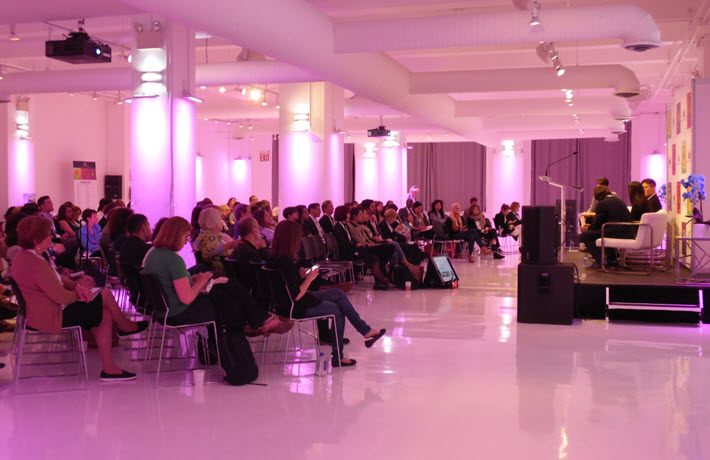 Programming in the pink: The presentation area on the fourth floor of the Metropolitan Pavilion seemed to be the best attended part of the New York Rights Fair. This is a panel discussion on publishing in China, May 30. Image: Porter Anderson

Most NYRF-goers we spoke to talked of what looked like sparse attendance. The Metropolitan Pavilion’s best-attended area was upstairs in the hall used for some solid programming. When asked, “Where is everybody?” the answer was, “On fourth floor seeing a good panel discussion.” Alas, this meant that the exhibitor and rights-center areas on the lower floors could look deserted. Even the stand set up by the mighty Scholastic at the Metropolitan appeared perpetually empty, as several visitors commented, not even manned by a person from the company.

And as one exhibitor put it to Publishing Perspectives, the arrival of the NYRF meant, “I had to buy two stands this year. I had to pay for one stand at BookExpo and one at the New York Rights Fair.” This particular exhibitor, a prominent one from outside the States, added that foot traffic at the NYRF stand had been “next to nothing.”

But needless to say, anecdotal observations aren’t actionable for the companies working on sorting out a way forward. With luck, the surveys will produce helpful answers in guiding how that “multiyear partnership” might look.

But what we can say we heard from those who talked about it with us is that the programming and basic intent of the NYRF—a better energized rights trading center than BookExpo had mounted in recent years—is welcome but that getting these two shows back under one roof is imperative.

It’s clearly not easy for exhibitors to organize and staff stands in two buildings. And it has always been clear that while rights and licensing transactions need an area of their own at a show, the cross-currents of the industry make it obvious that agents and scouts, a part of the business, shouldn’t be pushed out of the mainstream of the industry’s interests.

Rights specialists are becoming more central to the globalized industry of publishing, not less so.

Think of an excellent urban gymnasium with everything going for it except that its beautiful pool is two miles away, an hour on a shuttle bus. Many in the business may say that when it comes to the publishing world’s major trade shows, it’s much better to get everybody into the pool. 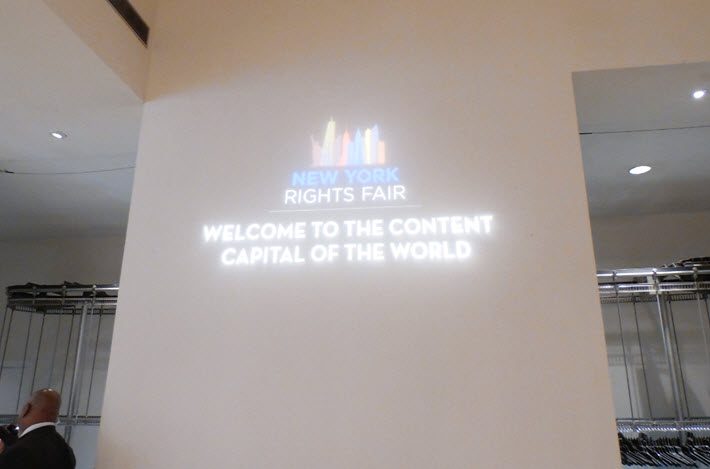 At the ground floor entryway to the New York Rights Fair 2018 at the Metropolitan Pavilion. Image: Porter Anderson