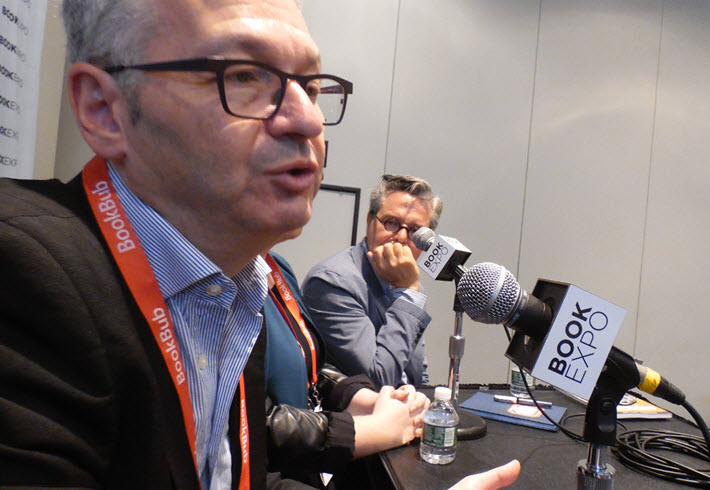 From European markets recovering from financial losses to translation in the US market and book-pricing differences based on authors’ genders, a ‘Beyond the Book’ panel at BookExpo looked at recent coverage of the books industry. 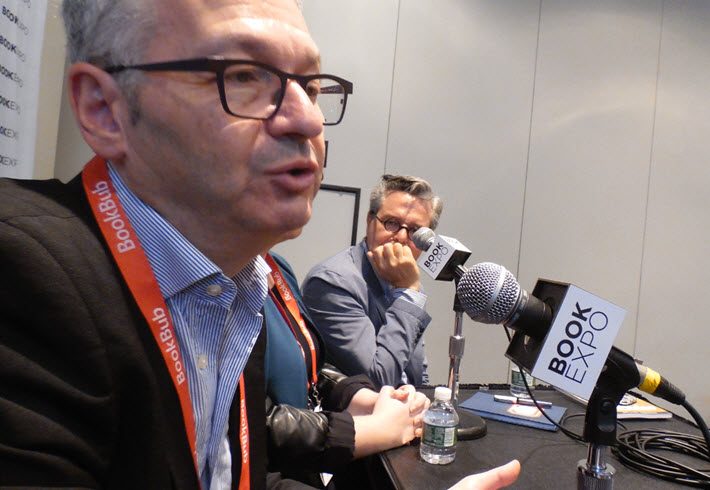 Kenneally: ‘Much in Common’

The podcast, titled, Covering Books Around the World, comes from a panel discussion convened by CCC’s Christopher Kenneally on the final day of BookExpo in New York City. And the conversation, in which Publishing Perspectives took part, touched on not only some of the features of the international markets’ development but also on recently released survey work on book pricing and authors’ genders.

In his introduction, Kenneally pointed out that those of us who cover the book industry on the international scale frequently see commonalities in play, with various “story lines,” if you will, running at different speeds.

“Book markets in the United States, the United Kingdom, and across Europe have much in common,” Kenneally said, “from the challenges of online commerce to bestseller lists dominated by authors with internationally recognized brands.

“[But] of course, national differences remain despite globalization.  Apart from cultural preferences and languages, price discounting—which is a feature of US and UK markets—is forbidden by law in France, Germany, and elsewhere, and obviously that has a great impact on the book business.”

Kenneally had brought together a group including the following speakers, familiar to many readers of Publishing Perspectives:

Today, we’ll excerpt comments from the event, hitting a few high points and recommending you give the full podcast a listen for more.

Having taken a devastating hit from the financial crisis, Spain’s publishing market, Javier Celaya told the session’s audience, finally can begin to see some growth. But notice that within a few sentences, he’d touched on the competition for readers’ attention and time from other entertainments, including streaming television.

“The good news is it’s over,” Celaya said, about the crisis’ worst effects. “We had fortunately small rebounds last year, a small growth of 2 percent.  It’s small, but it’s growth.  During seven years we had a huge financial crisis.  The Spanish market used to be a US$3.6 billion industry, and nowadays it’s a US$2.6 billion. A billion dollars disappeared, and unfortunately, although some publishers [are doing some] wishful thinking, we don’t think it’s going to come back. They’ve gone to Netflix.”

In five years’ time, Celaya said, “we lost two bookstores a day. During the worst year, which was 2015, 700 bookstores closed during that year.  The good news again is that this year, we had again a re-emergence of bookstores, but they’re a different type of bookstores. They’re smaller. They only have on average of 200 titles available.  And they’re coffee shops or galleries with books, which is a new type of lifestyle entertainment concept.  But they’re back, fortunately.”

“A billion dollars disappeared, and unfortunately, we don’t think it’s going to come back. They’ve gone to Netflix.”Javier Celaya

And however hopeful the Spanish industry may be of some stabilization, Celaya added, that loss in readership appears to have been profound. He said the country’s National Association of Publishers’ new survey–the first for which funding has been available in five years—indicates that “We lost close to 40 percent of readers” in the market.

“The good news is digital has grown quite a lot during this period, because people during the financial crisis weren’t able to afford a $20 book, and they’d rather pay $10 on an e-book version.”

In describing where the French market stands today, Fabrice Piault spoke, as had Celaya, of the damages of the financial crisis.

The French book market “is stable,” Piault told the audience, “in the long term. It has been shrinking a little, and after the 2008 crisis there have been five years with a decrease in sales. Not a very big decrease, but maybe 1 percent, 2 percent, something like this. Now it’s growing again, but it’s growing just a little.

“The traditional bookstores represent about 20 percent–maybe 19 percent, 20 percent–of book sales in France. Of course, it’s much stronger than here than in England, for example, where it’s less than 3 percent, I think.  So yes, bookstores remain strong in France, and that’s related to the fact that we have a fixed-price law. It’s the same in Germany.”

In an exchange with Kenneally, Piault confirmed that France’s Lang Law, putting fixed-pricing on books into place, “goes back some 20 year or more,” the important understanding being that it was not a response to the rise of Amazon and Internet retail. Piault confirmed that the Lang Law was passed in 1981.

“So it’s a long time,” he agreed, [and] that means that the prices are fixed by the publisher, and a retailer can only do some discounts. And not only discounts, they can also raise prices, but only by 5 percent” in either direction, “no more than 5 percent.”

And in addition to comments about the French market’s character and pricing structure, Piault brought up something that many in publishing elsewhere will recognize from their own markets, particularly pertinent to the French: a rise of popular content parallel to France’s revereed literary canon.

“We, of course, always had some authors doing popular fiction, like we have Marc Levy, or Guillaume Musso, who are probably not well-known here, or Katherine Pancol.  They sell hundred-thousands copies of each of their books. But now there’s really a new team of authors—young authors, usually women—writing any types of books. It can be feel-good books, it can be feel-good novels, romance. It can be also thrillers. It can be many types of books, but really with the intent of popular fiction. 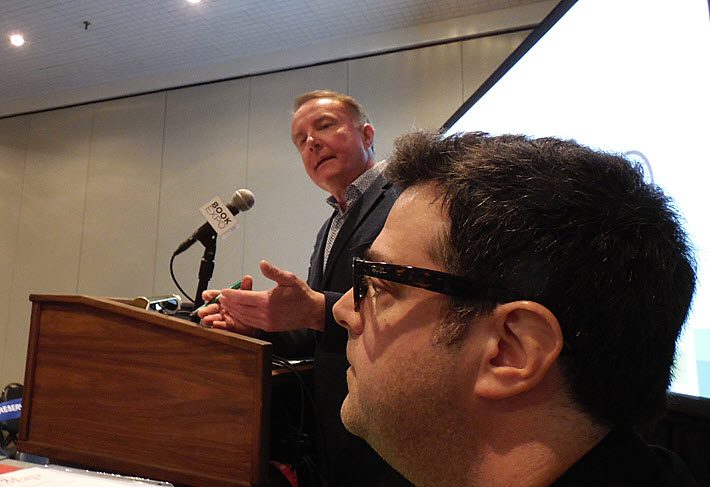 Albanese on Translation: ‘Amazon Has Jumped Into That Void’

Publishers Weekly’s Andrew Albanese was asked by Kenneally about translated literature from other territories in the American market and the role played in this by Amazon Publishing’s AmazonCrossing imprint, something familiar to readers of Publishing Perspectives.

Albanese talked about how translated literature historically has struggled to find traction in the US market. “For a long time,” he said, “it was difficult–still is very difficult for foreign work to be translated into English and sold in the US.  Amazon has jumped into that void. The number of translated books that Amazon through AmazonCrossing has published has grown exponentially.”

Albanese went on, however, to echo one of the industry’s most vexing digital-age problems—the ability to accurately measure industry output and sales because online sales data is held out of sight by the largest retailer, Amazon, as proprietary information.

“While I’ll praise Amazon for jumping into the translation market and other markets as well, I would caution, without the data, allowing them to lock up entire segments of the literature market is a dangerous game.”Andrew Albanese

“One thing I’ll say about this,” Albanese said, “is that it’s a problem for me in this regard, because we don’t get data from Amazon. We don’t see information from Amazon.

“And to me, it’s great if a company like Amazon wants to step in and use its muscle to bring works to an underserved audience” as in its development of translation through AmazonCrossing, “to bring those works to a larger audience, that’s great.

“But to have Amazon own that sector of the market and not share any information about it, not play well with others, not sell to libraries, is a problem.

“So while I’ll praise Amazon for jumping into the translation market and other markets as well, I would caution, without the data, allowing them to lock up entire segments of the literature market is a dangerous game.” 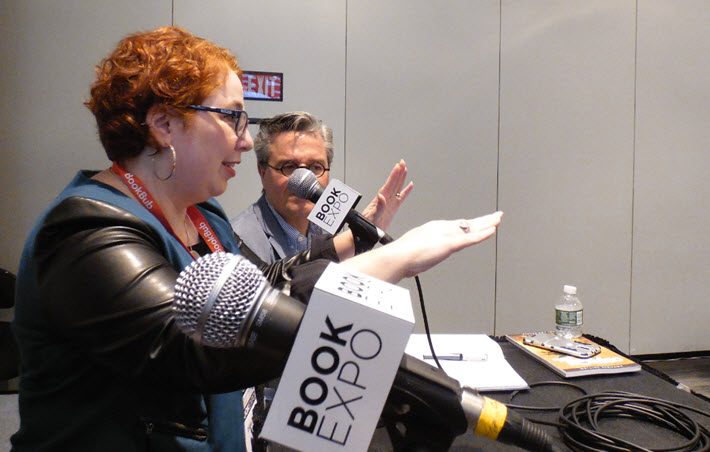 Dana Weinberg speaks at BookExpo on the Beyond the Book panel, with Javier Celaya looking on. Image: Porter Anderson

Weinberg on Pricing and Gender: ‘A 9-Percent Difference’

Weinberg made the point that the research based on author names, so that a JK Rowling would have been ruled of unknown gender for the purpose of the study—or even as a male when writing as Robert Galbraith. Nevertheless, even on the basis of names for the research, the 45-percent difference in pricing was compelling. Weinberg and Kapelner took into account various factors such as the preponderance of women writers in romance or of male writers in science and tech textbooks.

“We found that in the traditional market, there was a 9-percent difference” in pricing, male authors’ books being priced higher than women’s.Dana Weinberg

“Then we also looked at the differences in the way that genres themselves were valued based on the predominance of one gender or another,” she said. “So science and technology textbooks, just to harp on that same example, are priced much more highly than romance novels are.” And they found that even when such factors were taken into consideration and accounted for, “We found that in the traditional market, there was a 9-percent difference” in pricing, male authors’ books being priced higher than women’s.”

To her surprise, Weinberg said, she and Kapelner also found that this trend in pricing was present in the self-publishing sector, as in the trade, though with less dramatic differences based on gender.

“We found that all of the patterns were actually replicated in the indie market compared to the traditional market. … So we’re looking at these questions of why is it that when we look at how people are sorted, in indie it’s still more women writing romance and fewer writing science and technology? Why is it that when we look at pricing, the female-predominant genres are priced a lot lower than the male ones? And then we looked within, we found a 4-percent difference. So the inequality was much less.

“I should say that overall in indie,” Weinberg said, “male-to-female comparison was only a 7-percent difference compared to a 45-percent difference. But it wasn’t as we had originally thought, [that] indie was so much more democratic or egalitarian. It was really because of the price points, because they’re so compressed in indie down to these lower numbers. So there’s not a lot of room for variation.”

More of the discussion from Kenneally and his speakers is at the Beyond the Book site here. And more from Publishing Perspectives on BookExpo is here.