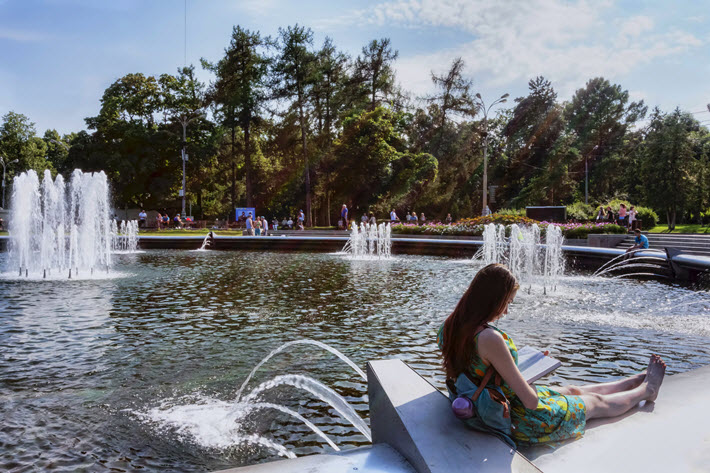 With what’s described as a waning summer reading habit since the end of the Soviet era, Russian government officials say they’re working on a new program to promote vacation reading both for youngsters and adults this year.

Family-targeted content this month at 7ya.ru tells readers, “The most responsible mothers of schoolchildren begin in May to collect books from the list for summer reading.” The article goes on, in fact, to back up what many parents and educators in the West are saying: Children will develop a stronger habit for reading if the material matches their interest. “Children should read books from the list of literature not for the teacher, but for themselves,” families are instructed. —Porter Anderson

The Russian government, together with the country’s leading national libraries, has announced plans to “create conditions” for the popularization of summer reading in the country, according to recent statements issued by the ministry of science and culture, which includes the development of reading and the book industry in its portfolio.

In the Soviet era, the beginning of the vacation season typically resulted in a significant increase in reading and book sales. But since the collapse of the USSR, a change in reading habits has occurred, with a decline in demand for content for summer reading and at other vacation times on the calendar.

Moscow, however, has said that it sees the recovery of the national interest in reading as a priority, so some are holding out hope that things can begin to turn around.

A specially created campaign–its name translating roughly to “A Book Is a Summer Friend”–has been launched as a branded lead to the new initiative. In a departure from previous such efforts, this year’s program is aimed at adult readers as well as children.

The program was unveiled in an event co-produced by the ministry and the library of the Gaidar Institute of Economic Policy, which includes in its mission a strong program in education methodology. The Gaidar’s wide-ranging activities as a nonprofit foundation also include economic and financial analysis, including data used, for example, by The Guardian‘s Marc Bennett earlier this month to report during Vladimir Putin’s fourth inauguration that corruption in Russia costs the country £26 billion per year (US$35.1 billion).

Dina Uniquel, a director with the Gaidar Library, tells Publishing Perspectives that the simplicity of the reading campaign’s mission is deceptive. “The main goal of the new project, of course,” she says, “is attracting people to reading in summertime.

“But this is going to have to be accomplished through individual work with readers as well as at the organizational level—drawing on both leisure time and knowledge-building, inside our libraries and outside.”

Uniquel says this is just the beginning of what is likely to be a long process, a major nation trying to rebuild a now-faded cultural habit.

According to a spokesman of Moscow’s mayor’s office, Sergey Sobyanin, a part of the new promotion provided by the city government this summer will be the development of unique reading rooms, open-air facilities sett throughout the city.

In a comments to Publishing Perspectives, Sobyanin says that a new, unique project will allow Moscow residents and guests to read free samples of books in several genres in specially designated sites in the urban space. If the rollout of these reading spots is successful in the capital, then more of these reading rooms will be established in other large cities, including St. Petersburg and Sevastopol.

At the same time, leading publishers are also preparing for the summer season, with seasonal titles ready for a timely launch.

For example, the Donkovtsev Orenburg publishing house has recently presented a series of books dedicated to the Prix Goncourt laureate Maurice Druon, whose books are in high demand in Russia.

Irina Petrova, a spokesman for the publisher tells Publishing Perspectives that she sees Russians’ interest in reading growing steadily, and as evidence she points to vacation-related upturns in sales, which she thinks are returning to the market. Petrova says that Russians on holiday–especially those traveling abroad–have been known in the past to buy four or five books before leaving on a vacation trip.

According to surveys recently conducted by Russian publishers, this year some of the most popular translated titles being chosen by vacationing consumers are Ian Stewart’s Calculating the Cosmos: How Mathematics Unveils the Universe, George Saunders’ Lincoln in the Bardo, and Cara Delevinge’s Mirror, Mirror.

Among popular new books by Russian authors are Catherine Rozdestvenskaya’s The Girl from Patriarchish.