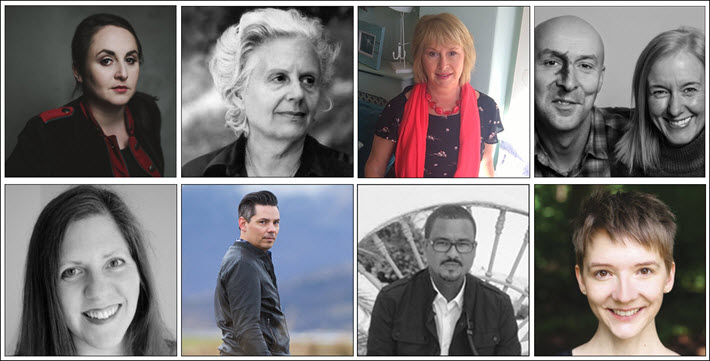 A wartime tale with a Senegalese protagonist in France, a generational family drama from Georgian author Nino Haratischwili, a Catalan classic, two books for young readers, and the Orient Express with Agatha Christie aboard—all are in our pre-BookExpo rights roundup. 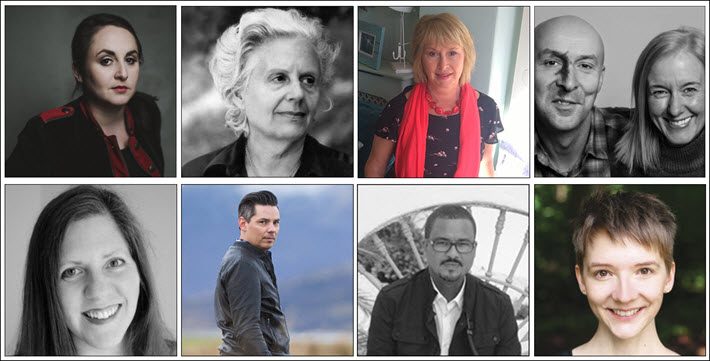 ‘Souls Have No Mouths’

Almost like our author photos, the books we look at this time in our rights roundup, tend to either pop with lively color or brood in gray-toned shadows.

We’re looking at children’s books, meditations on the emotional agonies of war, dark social fantasy, Agatha Christie as a character instead of an author, a family saga, and more. Original publications here are in English, Catalan, French, Norwegian and German.

We’re pleased to start with a challenging book by a master, the late Mercè Rodoreda, regarded as the greatest postwar Catalan author, whose The Time of the Doves is said by many to be the language’s best work. The surreal Death in Spring, compared by some to Shirley Jackson’s The Lottery, has elements of magical realism and is seen as an allegory of components of dictatorship—perhaps a timely read, is now available in English from Penguin UK. (The first English edition was published in the US by Open Letter Books in 2009).

“Souls have no mouths,” Rodoreda has her young protagonist say in Death in Spring in Martha Tennent’s translation, “so they spoke to us through the voice of the wind.” 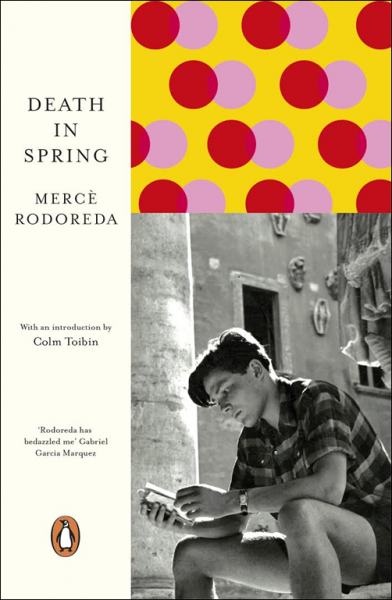 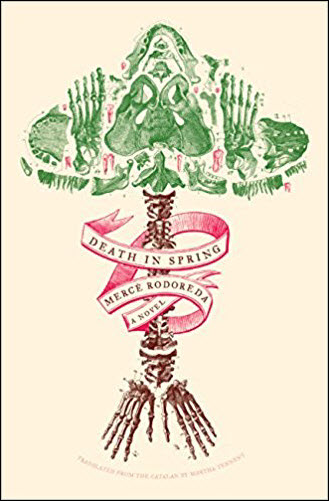 Regarded by many critics as the best work of the later period of Mercè Rodoreda’s career, Death in Spring–published three years after the death of the author–is described as a “dark and dream-like tale of a teenage boy’s coming of age in a remote village in the Catalan mountains.”

Written over a 20-year timeframe after Rodoreda was forced into exile following the Spanish Civil War, Death in Spring opens in the voice of the boy 14 years old, who lives in an isolated hamlet in which cruel customs are followed without question and attempts at rebellion are put down swiftly. The loss of his father means he’s required to make his way amid a society built on crippling conformity. 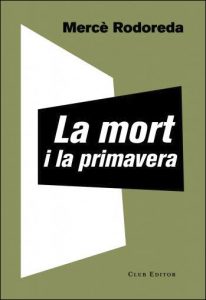 Seen by many as an allegory for dictatorship, the book is “a bewitching and unsettling novel about power, exile, and the hope that comes from even the smallest gestures of independence.”

From promotional copy: “The novel tells the story of the bizarre and destructive customs of a nameless town—burying the dead in trees after filling their mouths with cement to prevent their soul from escaping, or sending a man to swim in the river that courses underneath the town to discover if they will be washed away by a flood—through the eyes of a 14-year-old boy who must come to terms with the rhyme and reason of this ritual violence, and with his wild, child-like, and teenaged stepmother, who becomes his playmate.

“It’s through these rituals, and the developing relationships between the boy and the townspeople, that Rodoreda portrays a fully-articulated, though quite disturbing, society … [in] stunningly poetic language and lush descriptions.” 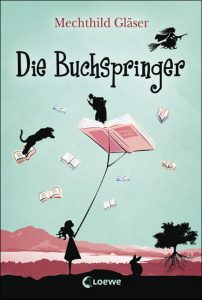 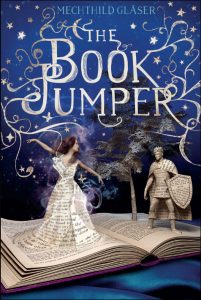 Loewe Verlag’s rights director, Friederike Fuxen, says that the company has been caught off guard by the rights-sales success they’ve had with The Book Jumper. It’s author Mechthild Gläser’s debut and, published in 2015, now has sold into 13 territories.

We’re perhaps somewhat less surprised. The Book Jumper is about Amy, who has inherited the family super-power of jumping into a book and taking part in its story, explore its world, interact with its characters. And book people love books about books. So perhaps it’s less shocking than originally thought that this book about books is such a hit.

Nevertheless, the title’s international reach is thoroughly impressive, and Gläser is being compared to the popular German YA author Kerstin Gier. 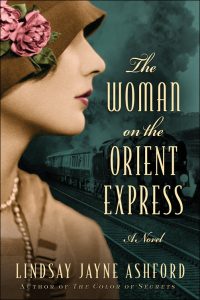 The Woman on the Orient Express by Lindsay Jayne Ashford

“Hoping to make a clean break from a fractured marriage,” promotional copy tells us, “Agatha Christie boards the Orient Express in disguise. But unlike her famous detective Hercule Poirot, she can’t neatly unravel the mysteries she encounters on this fateful journey.

“Agatha isn’t the only passenger on board with secrets. Her cabin mate Katharine Keeling’s first marriage ended in tragedy, propelling her toward a second relationship mired in deceit. Nancy Nelson—newly married but carrying another man’s child—is desperate to conceal the pregnancy and teeters on the brink of utter despair. Each woman hides her past from the others, ferociously guarding her secrets. But as the train bound for the Middle East speeds down the track, the parallel courses of their lives shift to intersect—with lasting repercussions.

“Filled with evocative imagery, suspense, and emotional complexity, The Woman on the Orient Express explores the bonds of sisterhood forged by shared pain and the power of secrets.” 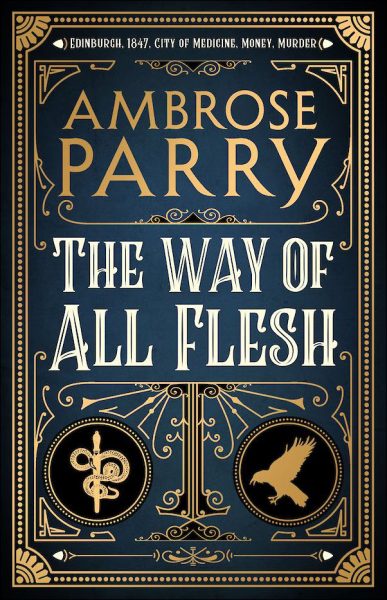 In this crime drama set in 19th-century Edinburgh, young women are the victims of gruesome killings, as medical student Will Raven is starting his apprenticeship with Dr. Simpson.

“Simpson’s patients range from the richest to the poorest of this divided city,” according to promotional copy. “His house is like no other, full of visiting luminaries and daring experiments in the new medical frontier of anesthesia. It’s here that Raven meets housemaid Sarah Fisher, who recognizes trouble when she sees it and takes an immediate dislike to him. She has all of Raven’s intelligence but none of his privileges, in particular his medical education.

“With each having his and her own motive to look deeper into these deaths, Raven and Sarah find themselves propelled headlong into the darkest shadows of Edinburgh’s underworld.”

As reported by Natasha Onwuemezi at The Bookseller last month, “Benedict Cumberbatch’s production company SunnyMarch has pre-empted the TV rights to Ambrose Parry’s new novel The Way of All Flesh, the first in a new historical series set in the medical world of Edinburgh in the 1840s.” 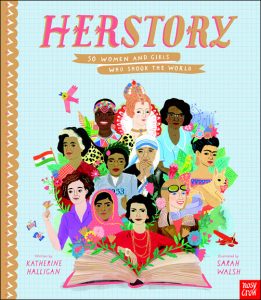 Herstory: 50 Women and Girls Who Shook the World by Katherine Halligan
Illustrated by Sarah Walsh 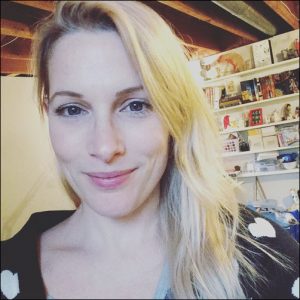 Called “compelling, motivating and usually arresting in equal measure,” Katherine Halligan and Sarah Walsh’s Herstory is called by its publisher “the perfect introduction to just some of the amazing women who have shaped our world.

“From Anne Frank to Frida Kahlo, and Marie Curie to Malala, these writers, leaders, artists, and scientists shook the world with their vision, bravery and hope. This beautiful book features inspiring words from all of these women, the stories of their childhood, the challenges they faced and the changes they made. 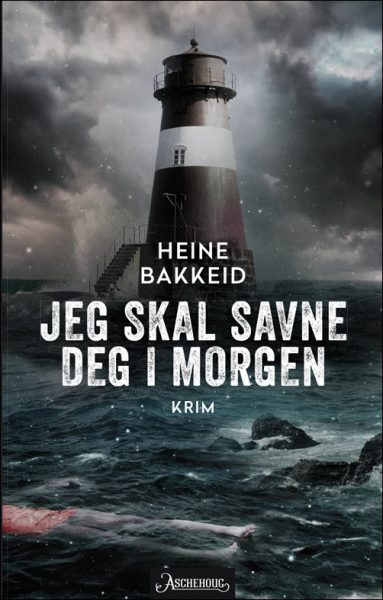 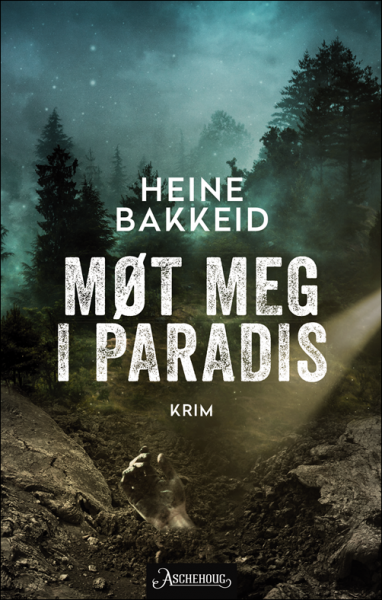 In the first of Heine Bakkeid’s first foray into crime fiction, “The stormy season is fast approaching when former interrogation leader Thorkild Aske is released from prison. Having served a three-year sentence for manslaughter, Thorkild is a pariah among his colleagues: a cop gone bad.

“Thorkild lets himself be persuaded to travel to a small town in the remote North” of Norway “in order to find a missing young man, Rasmus Moritzen. Supposedly gone missing while diving, Rasmus’ disappearance has been written off as a drowning accident by the local authorities. However the boy’s mother won’t rest till his body has been returned to her. And as the winter storm whips the waves into a frenzy, the body that is washed ashore isn’t that of Rasmus, but a faceless young woman.”

And in the second book, Thorkild reluctantly agrees to take on the job of consulting detective for Milla Lind, a renowned Norwegian crime fiction writer.

“Lind’s previous consultant, also a former policeman, was killed on the job as they were working on Lind’s latest novel, a story based on the real-life case of two girls mysteriously disappearing from an orphanage. It isn’t long before Aske begins to suspect that there’s more to the case, Milla Lind, and his predecessor’s death, than he first thought.” 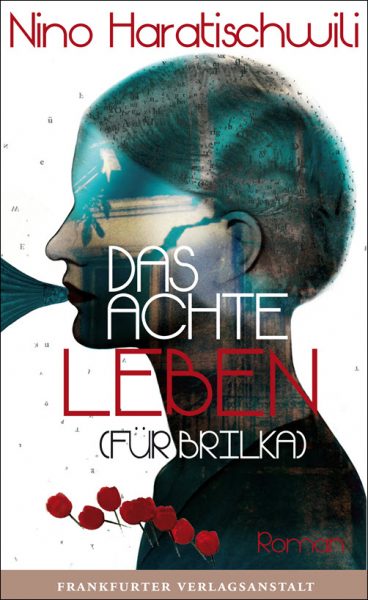 The Eighth Life (For Brilka) is described as “an epochal novel” about a family living through the Russian-Georgian conflicts.

From the book’s promotional copy, “Georgia in 1900: Stasia, daughter of a chocolate factory‘s owner, and her three sisters grow up in the upper echelons of Georgian society. When Stalin solidifies his control of the Soviet Union’s impoverished population, Stasia and her children Kitty and Kostja seek shelter in the house of Stasia’s sister Christine in Tbilisi.

“Germany in 2006: After the fall of the Soviet bloc, Niza, Stasia’s great-granddaughter, has broken with her family and moved to Berlin. When her young niece Brilka runs away during a trip to the west, Niza has to care for her. In search for her own identity, Niza will tell Brilka the story about Stasia and the family and about the secret recipe for the family’s hot chocolate, which has offered both salvation and misfortune for six generations.”

Author David Diop, born in Paris, was raised in Senegal and today is head of arts, languages, and literature research at the University of Pau in southwest France.

In his book, according to agency promotional copy, “Diop captures a young Senegalese man’s mind hurtling toward madness after experiencing the nonsense and horror of war and death” in World War II France.

“Using the rhythm of the native language of the Wolof people, Diop’s writing is said to take on a sense of urgency to a story about “the turmoil of war, the dark side of men, and the depths of madness.”

Do you have rights deals to report? Agents and rights directors, send an email with “Rights Roundup” in the subject line to Porter@PublishingPerspectives.com including the following information: