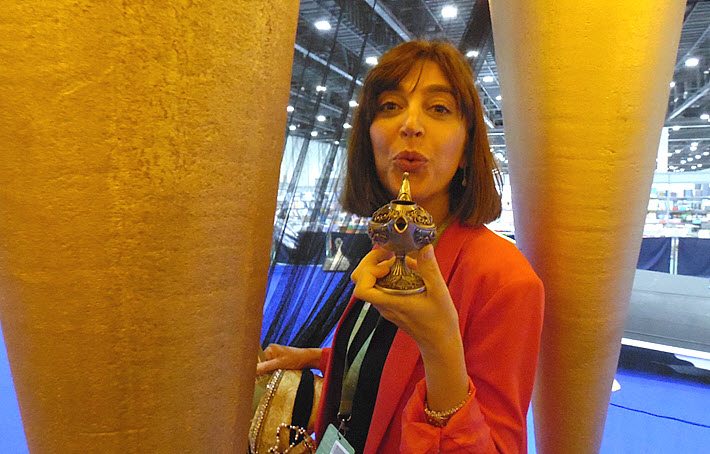 Lebanese publisher Rania Zaghir designed an immersive play space for children, Sea of Tales, at the Abu Dhabi Book Fair based on Arabic classics including ‘The Thousand and One Nights.’ 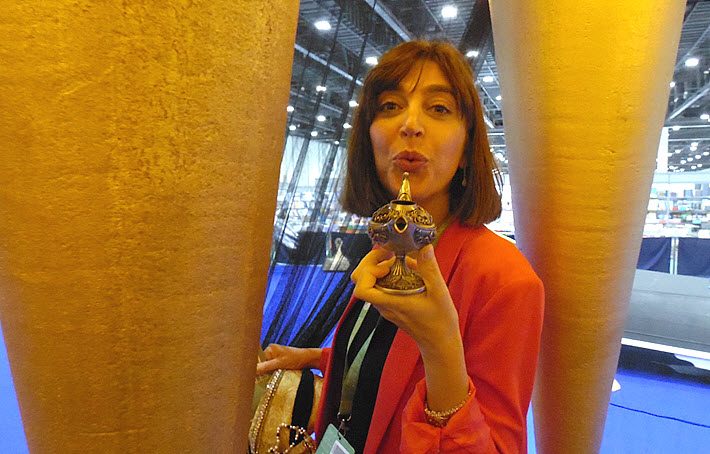 Lebanese publisher Rania Zaghir in the Ali Baba cave she designed as part of the ‘Sea of Tales’ she designed for the 28th Abu Dhabi International Book Fair. Image: Porter Anderson

She’s a storyteller, after all, and she chats the whole way about how she was taken aback when asked to design—not just conceptualize—the fair’s 800-square-meter children’s “creative corner” called the Sea of Tales.

Zaghir founded her publishing house, Al Khayyat Al Sahgir, in 2007, and she specializes in picture books that help develop Arab children’s sense of themselves, not least by putting them in touch with the literature of their heritage.

At the book fair, which closed last week, her “Sea of Tales” for children emphasized just that. Using elements of Sinbad, Ali Baba and the 40 Thieves, and, of course, The Thousand and One Nights, she created a kind of literary theme park to introduce 120 children every hour to these stories through a series of activities.

“I’m very proud of our literary heritage in the Arab world. But if we don’t present it in a new form, future generations won’t be able to connect with it.”Rania Zaghir

“I’m very proud of our literary heritage in the Arab world,” she says. “But if we don’t present it in a new form” capable of capturing contemporary children’s imaginations, “it will die and future generations won’t be able to connect with it.”

“‘Sea of Tales’ in Arabic,” she says, “is a more poetic name than it sounds in English.” But it works as a motif for her exhibition. The strongest visual element of the space is billowing blue silks roiled by air pumps to create boisterous waves, a big hit with the kids.

“You should see them diving into it,” she says, adding that the giant red pomegranate at the center of the space is for a story “that’s not as well known, from the Arabian Nights, but it’s very important to us, the pomegranate tale.”

Aladdin’s lamp stood on the floor amid other vases and vessels inside the exhibition’s cave full of twinkling lights. An overturned boat was crawled under and over by kids, while board games kept others busy when waiting to hear a new story from one of the storytellers engaged for the event. 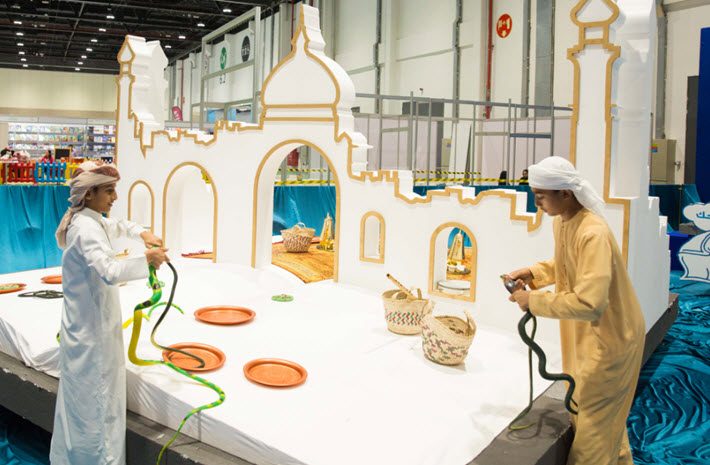 ‘We’ve Had Adults Come and Play’

Segmented by venue and activity, the Sea of Tales’ own schedule was a busy one. 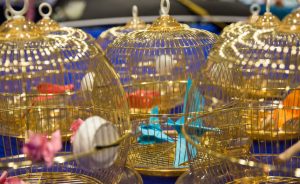 The theater events included Les Amis Des Marionettes in The Lost City of the Sun, demonstrations of dry ice’s strange properties were presented by “Prof. Ali,” and the fair’s Guest of Honor, Poland, contributed a Polish dance workshop.

Zaghir resisted any attempt to place age limits or recommendations on the experience. “It’s really very annoying and very limiting,” she said, to have to say that her busy field of play was for one age group or another. “And yes, we’ve had adults,” she said. “They come and play.”

She also worked hard, she says, to use materials and decorative elements that children could emulate at home. Paper birds fill the gleaming cages around the story tent. The paper boats ringing the space on regular exhibition hall stanchions looked homemade, and the bejeweled headgear in the Garden of Turbans glitters with costume-party excess.

Arts and craft activities included papercutting, graffiti, a “collective mural” contributed to by many of the children, and lessons in Arabic calligraphy. Even while waiting for their next “adventure,” the children were drawn into

And of course, there was reading. Under a bright white tent surrounded by bird cages, the children sat on pillows to hear authors read from their own works, and to listen to Emirati folk tales presented, in part, through the Goethe-Institut Gulf Region program and the United Arab Emirates’ Board on Books for Young People (UAEBBY).  There also was a short story writing workshop and floor games.

The Abu Dhabi International Book Fair, in its 28th edition, had a strong lineup of speakers in a professional program at its core, but was very much a public-facing event overall, as it is each year. Many in the Arab world’s book community depend on selling books each year during the fair, and a part of the mission of the Sea of Tales and other events for kids is to build the idea of books and reading into young readers’ consciousness. 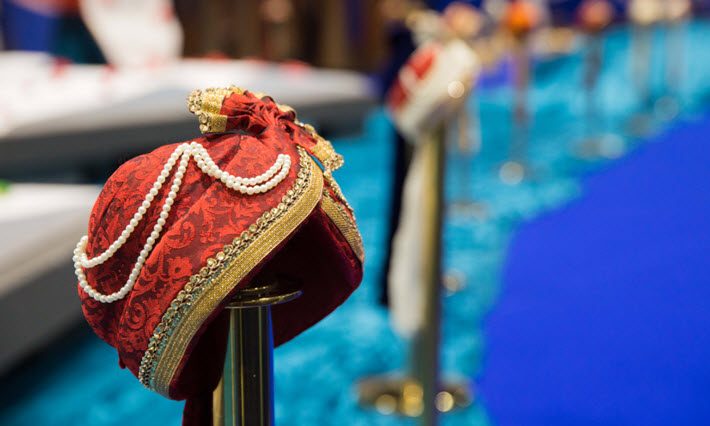 ‘Reflected in the World of the Tales’

Zaghir, whose work won the Lebanon Book Fair’s 2016 Best Children’s Book Award and the Extraordinary Book Award at Berlin’s International Literature Festival in 2015, is an author-turned-publisher whose experience of the immersion of reading led her to several aspects of the Sea of Tales’ engagement-driven activities.

Not unlike the “Put Me in the Story” concept that Dominique Raccah’s Sourcebooks has capitalized on in the States, Zaghir’s concept included entryways to the children’s space shaped like giant golden eggs and mirrored on the inside, “so that as the children come in, they see themselves reflected in the world of the tales,” she said.

And the program included a photo booth so that children could capture images of themselves in their turbans, surrounded by the plan’s magical settings–Sinbad’s gigantic open book and fortress, for example, and a huge table and chairs for the making of story-driven artwork to take home.

While Zaghir may have been surprised this year to find that her assignment included designing the space, the role appears to have charmed her just as Sea of Tales charmed many of its young visitors.

“Next year,” she says as she lopes off for another meeting in another part of the National Exhibition Center, “it’s going to be even better.” 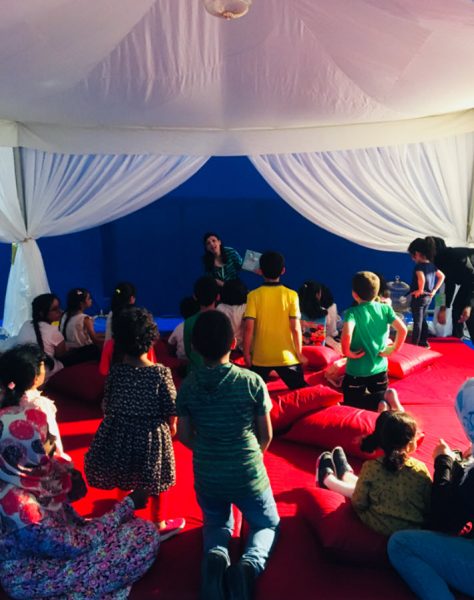