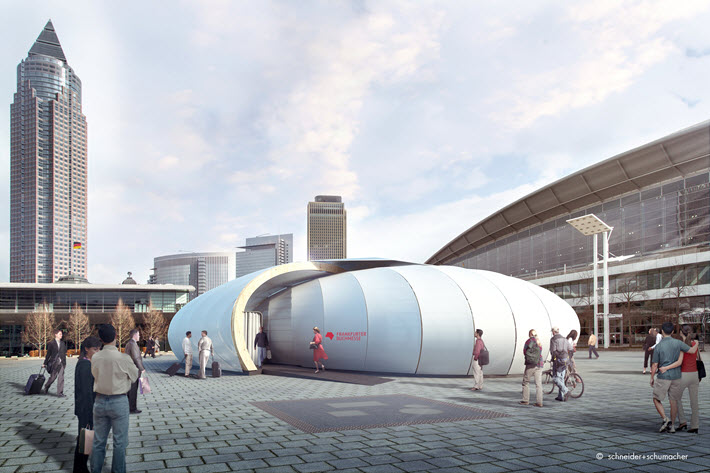 The new 300-seat performance and presentation space being created for the Agora at the center of the Frankfurter Buchmesse is designed to be dismantled and stored from year to year. 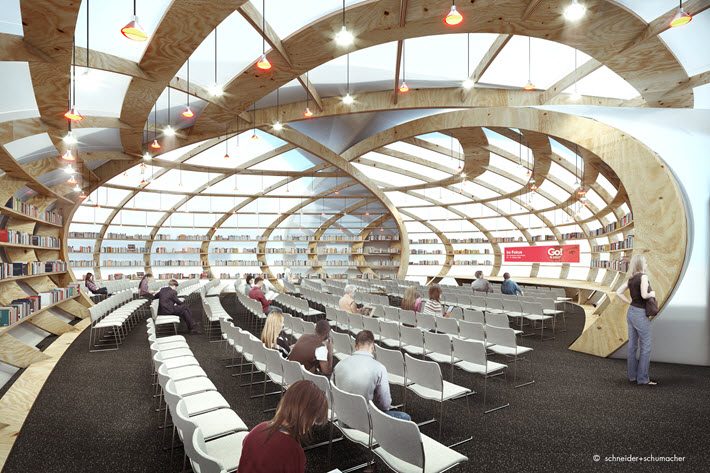 The new Frankfurt Pavilion in the Frankfurter Buchmesse Agora is designed to seat some 300 people and will be inaugurated at the fair in October. Image: schneider + schumacher

‘At the Heart of the Largest Trade Fair’

The Frankfurter Buchmesse‘s new Frankfurt Pavilion, designed for the presentation of literary events in the fairgrounds’ Agora, is designed by architecture firm schneider + schumacher GmbH and will make its debut at the fair this year, October 10 to 14.

The company faced the interesting challenge in this project of creating a temporary but solid structure that can break down and be stored between book fairs, for years to come.

In its first season this year—which marks the Frankfurter Buchmesse’s 70th anniversary—the Pavilion is expected to be used primarily for the appearances made by publishers’ key authors and by officials and dignitaries in events such as the fair’s opening news conference on October 9.

Award ceremonies, book presentations, panel discussions, and other occasions will be set there during the trade days, with bestseller readings, musical performances and culinary events staged at the pavilion on the public-facing weekend.

Some of the specifications of the structure:

In a prepared statement, Frankfurter Buchmesse director Juergen Boos is quoted, saying, “Authors and their work are at the heart of the largest trade fair for books and media. The Frankfurt Pavilion is intended as a place for holding debates, sharing knowledge, making contacts and forging trends that pave the way for the future of the global publishing industry. We already look forward to the opening of this new stage.” 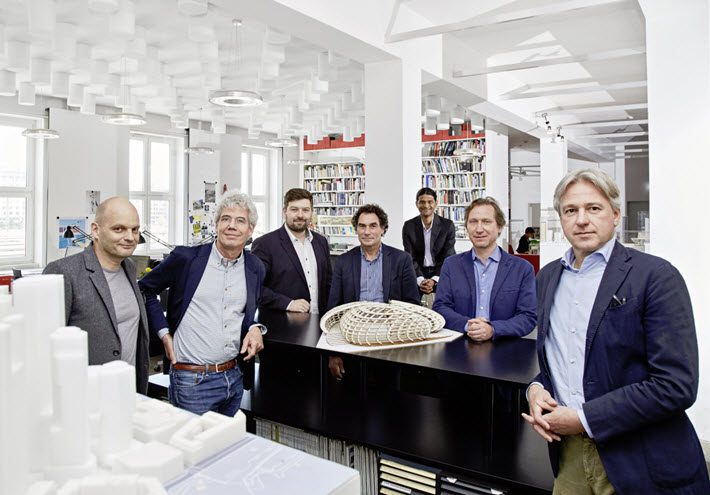 Programming of the new space is being developed, say organizers of the fair, in coordination with a number of exhibiting partners including:

It’s also expected that BookFest, which was inaugurated in last year’s fair, will have some of its events featured in the new space, too.

Lars Birken-Bertsch, who leads the Bookfest project as director of business development at the Frankfurter Buchmesse, is quoted in media materials about the new space, saying, “Stories need good spaces. The Frankfurt Pavilion is meant to offer our partners and their exceptional content an appropriate framework.

“Together, we want to create a really special atmosphere for dialogue and networking between our fair visitors–a central stage for publishing professionals and lovers of literature from around the world. With the Pavilion, we’re laying the foundations for greater visibility of content and authors in Frankfurt.” 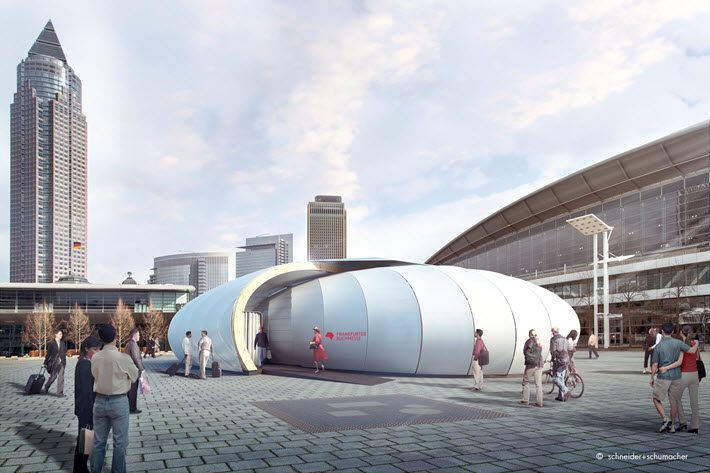 ‘A Cocoon That Opens Up’

The design team also has contributed a joint statement, which reads, “Books always only reveal their inner nature upon closer inspection. And then, ideally, they cast a spell directly on you.

“This is precisely the image we had in mind when we designed the Pavilion [as] a cocoon that opens up inside into an atmospheric space for multimedia presentations. The result is a significant and inviting space for coming together around books at the heart of the fair.”

Klaus Bollinger of the structural design team is also quoted, saying, that the facility “can also be interpreted as the parametric transformation of a bookshelf into a space-forming construction.” 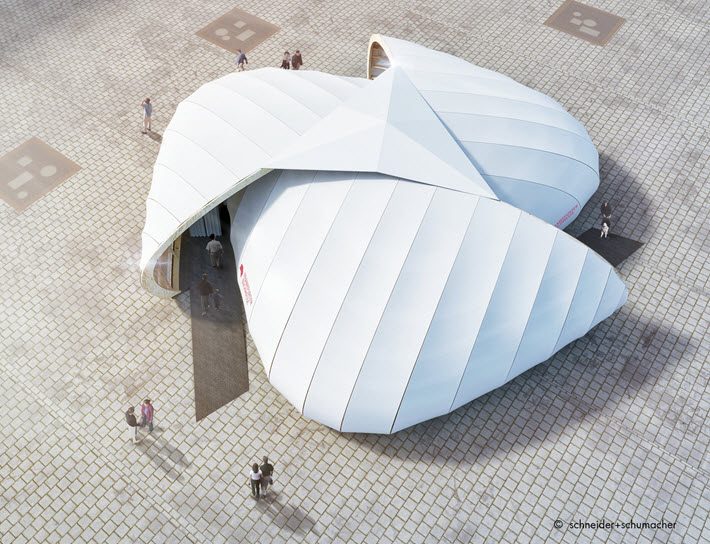