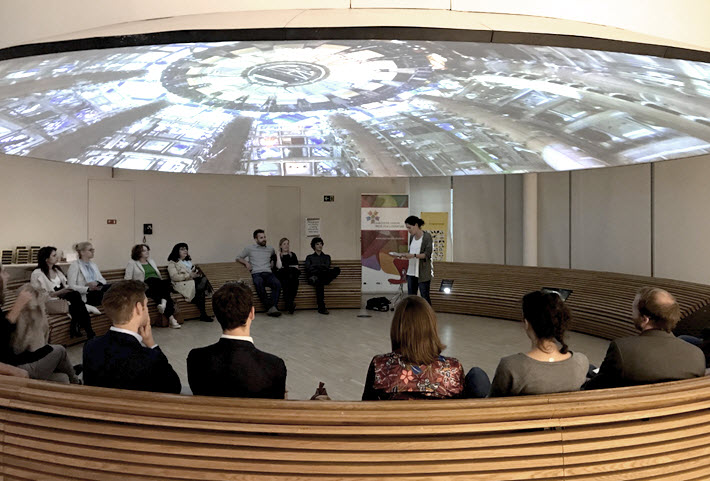 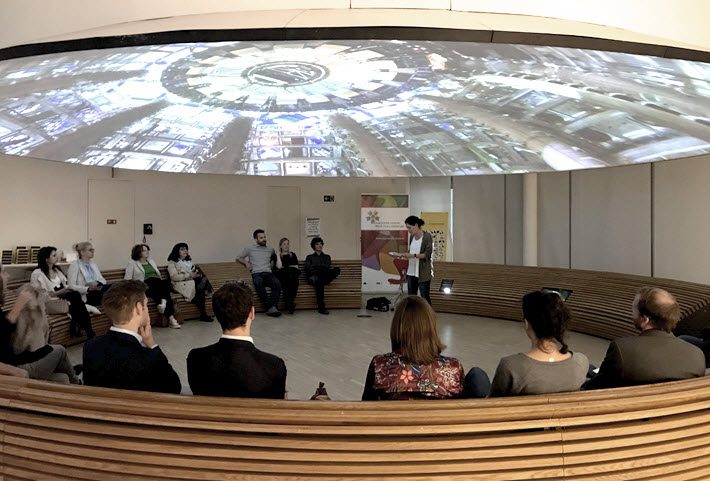 The Greak writer Kallia Papadaki, who won a European Union Prize for Literature in 2017, reads her short fiction, “Linkage,” on May 23 at the House of European History in Brussels. Image: @EUPL

European Stories: ‘Anything and Everything’

Themed “A European Story: EUPL Winners Write Europe,” a new short-fiction competition launched this week is designed to “celebrate the diversity of European literature, multiculturalism”—as well as the 10th anniversary of the European Union Prize for Literature.

Regular readers of Publishing Perspectives will recall that we covered the announcement of this short story competition in December. At that point, this unusual and interesting project was making a call for short fiction from the 108 past winners of the European Union Prize for Literature. 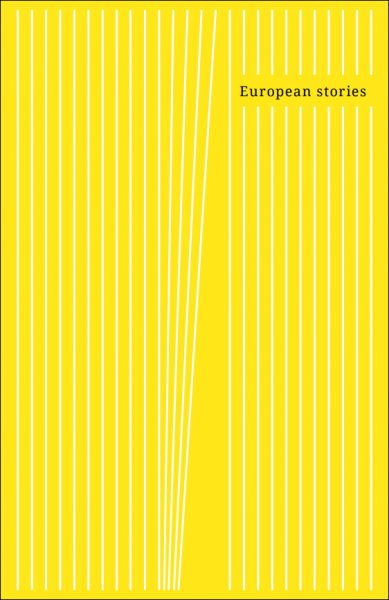 What resulted is an anthology of new work created in response by 36 of the 108 winners. The authors who responded represent 26 nations, and each of them has submitted a piece that answers the EUPL’s call for distinctly “European stories.”

You’ll find the entire group of 36 works ready for download here, available in both PDF and EPUB formats.

And you can cast your vote between now and October 21 for your favorite of these works here.

Public interaction is a key element of the EUPL program, as it is with two other programs launched in the last week—the PBS Great American Reads program and the ABA Journal’s Harper Lee Prize for Legal Fiction.

Everyone who participates in this public vote will automatically enter a draw and 10 lucky members of the public will win a trip to Vienna for the ultimate awards ceremony in November.

In addition to the public vote, a professional jury is being put into place by the administration, a group of selected personalities from art and literature, and it’s that group’s task to create a shortlist, then choose the winner.

In addition, a special prize awarded by members of the European Parliament is to be created, along with an honorable mention for work related to cultural heritage.

As we wrote in December, with a length limit of between two and four pages, these are indeed short works, and the concept for the competition parallels this year’s European Year of Cultural Heritage. “There are no limits to one’s imagination,” announcement materials said then. “‘A European Story’ can be anything and everything.”

Each of the contributing former winners if the European Union Prize for Literature is listed with her or his nation and winning year.

Aurelius: ‘A Dialogue Between Cultures and People’

In prepared comments listed for the release of the new 36 stories, the president of the European Writers’ Council, Gunnar Aurelius, is quoted referring to the program by the name “Writing Europe,” and saying, “‘Writing Europe’ means releasing a dialogue between cultures and people, and telling stories about places, from the many sites of languages, created by talented emerging authors who have received the EUPL prize.

“Through the 2018 EUPL, we celebrate these creators of fiction, and highlight that ‘Writing Europe’ is also reading Europe in its heterogeneity.”

Speaking for the European Publishers Federation, Henrique Mota is quoted, saying, “For these last 10 years, FEP has been very proud to be actively associated with this significant action promoting European literature and improving the circulation of works in Europe and beyond.

“And this year, it is an additional satisfaction that thanks to our work with the LIA Foundation, we have been striving to make both the book with the 36 short fictions and the voting process for the contest, fully accessible to all readers.”

On behalf of the European and International Booksellers Federation, Jean-Luc Treutenaere says, ““The EUPL has been a fantastic adventure over the past 10 years and this year represents a milestone in its history. We are celebrating 10 years of European literature, creativity and most importantly cultural diversity.

“As a bookseller, it has been a pleasure to see so many of these winning books sold in their own countries, but also across borders to the great benefit of European readers. Being able to offer Greek, Icelandic or Serbian books to readers in one’s bookshop brings an extraordinary richness and an incredibly wide cultural variety.

“On a personal note, I also wish to celebrate ten years of fruitful partnership and mutual respect between our three associations and the European Commission, without which the increasing success of the EUPL would not have been possible.” 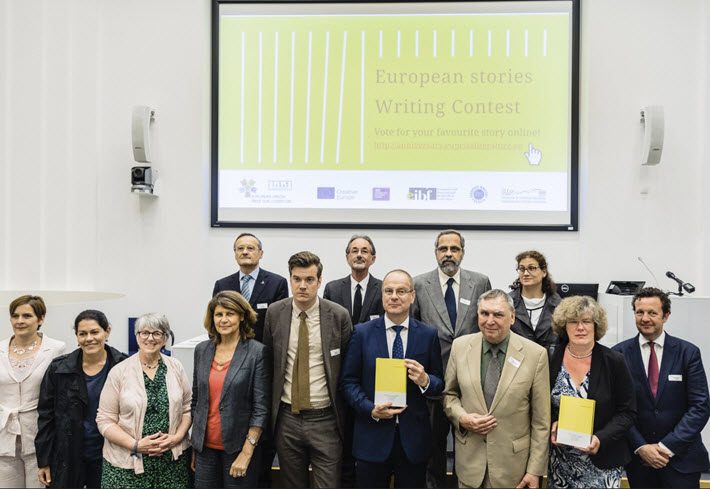 Officials gather for the May 23 launch of the European Union Prize for Literature’s short-fiction anthology at the House of European History on May 23. Image: @EUPL