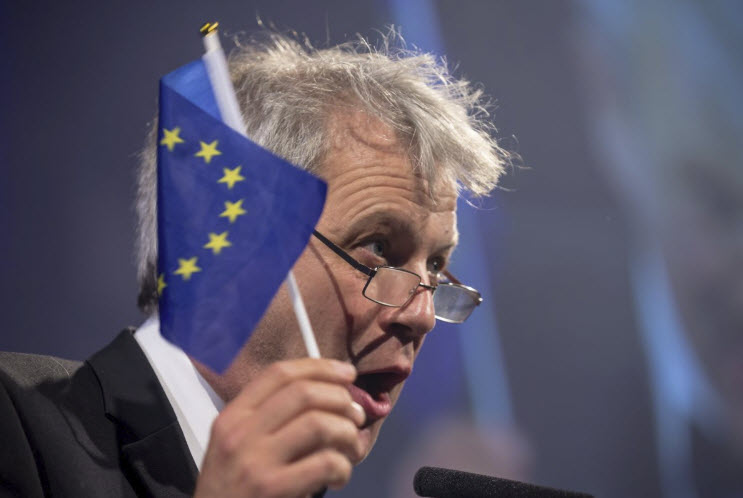 The text of illustrator Axel Scheffler’s comments at the British Book Awards this week makes Brexit more personal for many, as an intensely valued and celebrated publishing artist tells London: ‘It hurts and makes me angry every day.’ 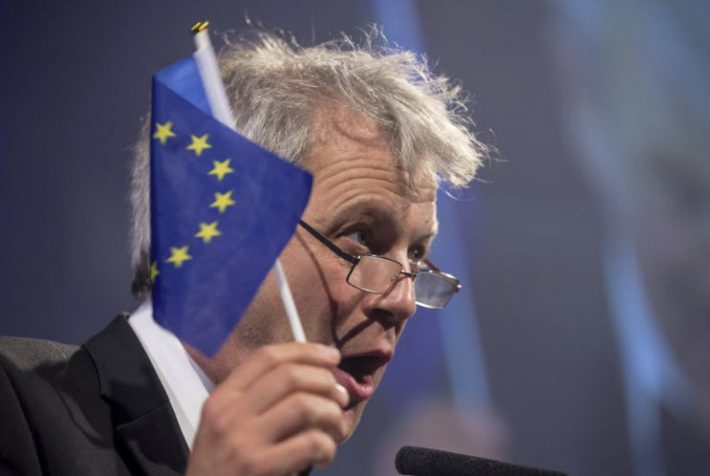 ‘We Don’t Really Want You, After All’

As we mentioned in our coverage of a Publishers Association (PA) session on Brexit at London Book Fair last month, international visitors to the annual trade show found that few members of the UK industry seemed to want to talk about Brexit.

That may have changed this week through the acceptance speech delivered by a beloved laureate at Monday evening’s (May 14) annual British Book Awards, staged by The Bookseller at London’s Grosvenor House. 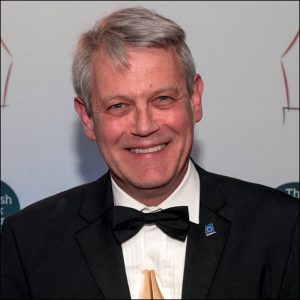 As we relayed in our initial report on the awards, the acclaimed illustrator of The Gruffalo, Axel Scheffler, was presented by his British-American colleague Sarah McIntyre with the Illustrator of the Year honor, the first time the British Book Awards have conferred such a prize. Gruffalo books have sold more than 13 million copies worldwide.

Thanks to The Bookseller having posted on Tuesday (May 15) both the text and the video of Scheffler’s comments, we all can see what caused the vast ballroom in Hyde Park to go quiet. In his German accent, Scheffler works his way through his remarks, dense with assurances that he deeply appreciates the award but determined to try to convey to his British colleagues the hurt that Brexit is producing for so many in the UK who don’t know if they’ll be able to stay in the country, come next March.

Video of the crowd during his remarks shows a serious audience during his speech. However they find chances to interrupt Scheffler with reassuring applause. Near the end of his four minutes of remarks, he refers to his title with collaborator Julia Donaldson, Room on the Broom (Macmillan’s Children’s Books, 2016).

Scheffler says to the Nibbies’ audience: 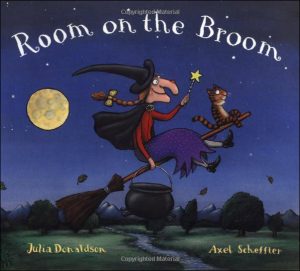 “It makes me sad, and I worry when I think of a post-Brexit future for the UK families, especially the children, who are growing up with our books.

“What went wrong? What did they miss, the parents and grandparents who were reading Room on the Broom with its message of the importance of solidarity, partnership, friendship, and kindness?

“The book wasn’t called No Room on the Broom.”

All is hardly gloom and doom in Scheffler’s deft delivery. In going through the rounds of his thanks at the beginning of his talk—for his publishers Macmillan, Scholastic, and Nosy Crow, for Donaldson, his readers—he wryly thanks The Bookseller “and the judges who chose me, a foreign EU citizen in Brexit times. That’s a nice gesture.”

Scheffler also spoke about his fears that he won’t be in the UK when the next book with his Gruffalo collaborator Julia Donaldson comes out: 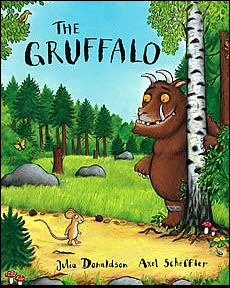 “I also accept it with a heavy heart and maybe even a slightly bitter feeling—it feels like a consolation prize. Or even a farewell gift. …

“It’s just 10 months until ‘Freedom Day’ next March, and I—and my fellow EU citizens, many working in the UK book industry—are still living in uncertainty. We have, so far, no guarantee that we can still live and work here in the future. In a worst-case scenario, I might not be allowed to stay here by the time my next book with Julia Donaldson is launched.

“Michael Morpurgo wrote movingly, ‘My uncles fought for peace, not for Brexit.’ He wrote that Britain doesn’t really like the rest of Europe. And he’s right. That hurts and it makes me angry every day.”

The Hamburg-born Scheffler moved to the UK at age 25 to study at the Bath Academy of Art and has lived in England for three-and-a-half decades. And for all his many awards and success, he widened his concerns to mention one of the evening’s presenters, the 84-year-old Judith Kerr, like him one of the UK children’s industry’s icons: 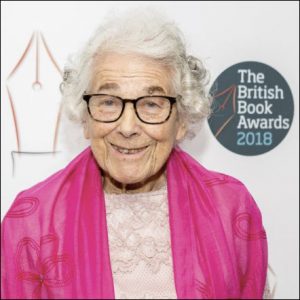 “Here, in this room, you have a refugee from the Nazis [Judith Kerr] and a peace-time EU immigrant giving something for the families and the economy of the UK. But after the Brexit vote it feels, despite our contribution, as if this country is saying, ‘It was all a mistake! We don’t really want you after all.’

“A Brexiteer would, of course, say, ‘Of course we want them when they make money for us.’

“But how can you gauge the future contribution of a young girl, as Judith was when she came here, or a 25 year-old student, as I was.?”

Here, before we go on, is the tape of Scheffler’s comments from the stage on Monday.

An Industry Ready To Talk About It

The UK publishing industry is hardly unready to address Brexit and its potential challenges.

That session at the London Book Fair was packed and driven by good questions and worrisome points that publishing’s players logically want to understand and prepare for, even though, as the phrase came across then, “much uncertainty” was the order of the day. 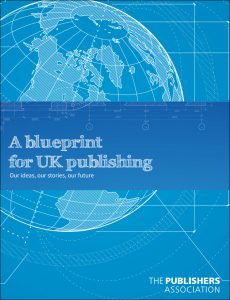 The Publishers Association’s “Blueprint for UK Publishing,” a document you can download in PDF here, is well explicated and nuanced, a look at the issues the industry sees as potentially damaging, pending what the seemingly endless EU-UK negotiations produce. How much impact can the creative industries have on those negotiations?

In its distillation, the association’s argument is based in 10 points. And if there’s any consolation for Scheffler and the many others who are working in the UK industry as EU citizens from outside, it may be that Point No. 1, the top of the publishers’ list of requirements, is that they must “Maintain access to global talent and ideas.”

And yet, realities clearly weigh heavily on many in the business. As Jason Douglas is reporting in the Wall Street Journal, the “rules of origin” in trade with the EU may present challenges ahead. The “rules of origin,” as Douglas explains, “are used by customs authorities to establish where a product came from in order to waive or levy a tariff,” and while the origin of a British book may not have the complexity in this regard of, say, an automobile being exported, the issue you see at No. 6 on the Publishers Association’s list, “Maximize our ability to export to all markets,” is critical.

It’s no secret that there are those in the American market interested in seeing the UK’s special relationship with Europe’s markets undone. And as agent Clare Alexander has put it, “If American editions were available anywhere else in the European market then the UK would become indefensible.” More than a third of the UK book sales reportedly are made in the European marketplace, and the industry sees itself creating 29,000 UK jobs—with a trade surplus of £1.1 billion (US$1.5 billion).

That’s the technical side. More of it can be seen in the helpful graphic below from the Publishers Association’s document.

On Monday night, many in the rightly proud UK industry found their honored illustrator providing them with a picture of human tariffs that Brexit already is exacting: honored players in the business feeling they may be dismissed as no longer valuable. He sounded wounded. Philip Pullman, named Author of the Year, stood up for Scheffler’s comments to say from the stage Monday that Brexit is “an act of stupendous folly.” And many generous expressions of appreciation for Scheffler’s comments can be found in social media.

There are ironies in this forest. The Gruffalo, Scheffler’s trademark illustrative character, is thought by the clever Mouse to be a fictional beast—until the real Gruffalo arrives in all his fearsome grotesquerie.

While it may seem that nothing could cause so revered an illustrator as Scheffler to be unwelcome in the UK, these are strange times, and on both sides of the Atlantic unthinkable breaks with agreed realities grow more common daily.

What Scheffler did is what publishing people always claim as their greatest gift: he told a story. And suddenly, the monster was real and the Mouse needed every bit of cunning he had. The British Book Awards this year have earned a special commendation of their own for humanizing a wrenching issue normally understood in business and political terms. Because, as Scheffler told the British Book Awards, “Beware, Britain—if you have no friends in a hostile environment—the dragons may come and get you.”