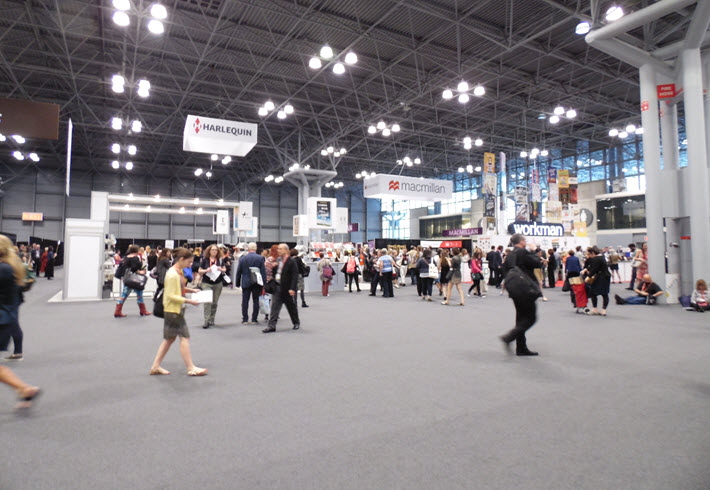 During BookExpo at the Javits Center next week, trade visitors and rights specialists will be in two different parts of the city, as the New York Rights Fair makes its debut at the Manhattan Pavilion. 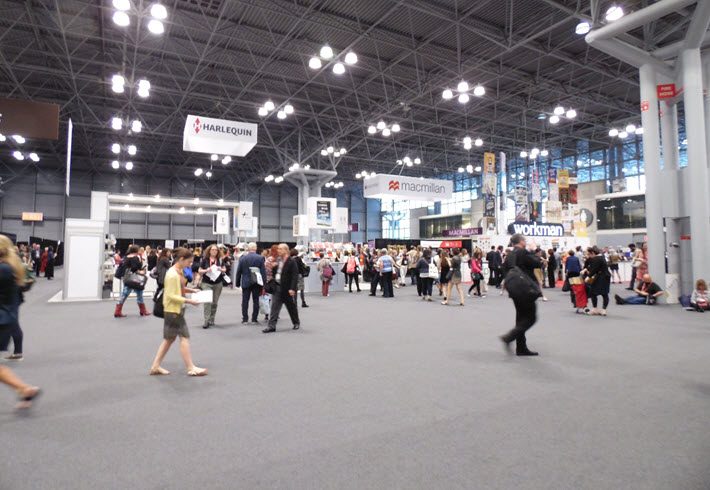 BookExpo’s Rights Center Is Across Town

A new arrival on the scene during BookExpo in New York City, the New York Rights Fair runs parallel to BookExpo next week, May 30 to June 1. It’s been endorsed as BookExpo’s official rights center. And it’s in a different venue, the Manhattan Pavilion on West 18th Street between Sixth and Seventh Avenues—not at the Jacob Javits Center with BookExpo.

Produced by Publishers Weekly, the Bologna Book Fair (BolognaFiere), PubMatch, and the Combined Book Exhibit, the New York Rights Fair was announced last month to have reached an agreement with Reed Exhibitions, which produces BookExpo, to be the “official rights fair” of BookExpo. The word was released during London Book Fair, another Reed Exhibitions show.

There was a gentle irony in that timing. No one can envision London Book Fair without its booming International Rights Center, always the noisiest, most bustling elevator stop at Olympia London. And yet here was BookExpo’s rights center being produced by other companies, a 30-minute walk away from BookExpo.

A part of the reason has to do with a search by BookExpo for some of the energy it has lost in recent years, especially in the international book trade. As the Associated Press’ Hillel Italie wrote last year, “Square footage for the show has shrunk noticeably in recent years and the large gaps on the convention floor at times gave BookExpo the look of an idled factory.”

Ingram’s exhibition space on the main floor at BookExpo 2017 appeared big enough to apply for its own ZIP code. And the International Rights Center, at the south end of the floor appeared sparsely occupied.

This year? Rights will be traded at the New York Rights Fair. 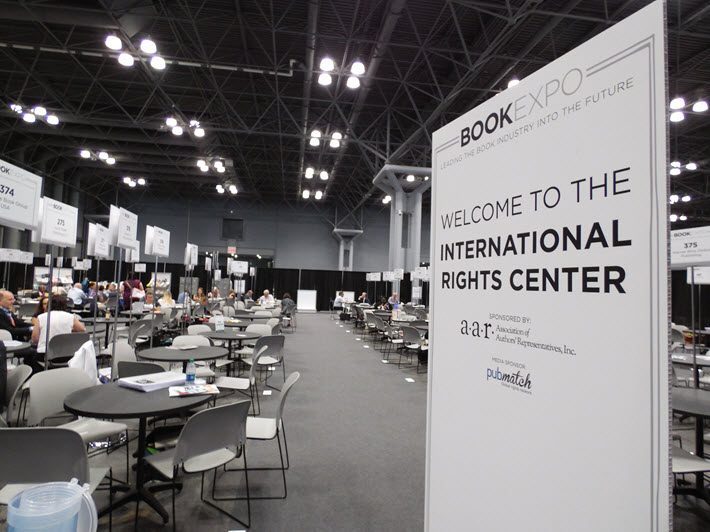 The 2017 BookExpo International Rights Center on the Friday morning of the fair. Image: Porter Anderson

Responses in the international rights community to the advent of the Rights Fair look good, in terms of registered exhibitors. It appears that just over half the exhibitors listed, at this writing, are from outside the States.

Trade visitors have been offered a single day’s pass at $125 and a three-day pass at $225.

Some of the international players registered for the New York Rights Fair include:

China Literature, 50-percent owned by Tencent, made a strong showing at London Book Fair and has announced that it will be at the New York Rights Fair, with special interest in making deals with film and animation companies.

Istanbul-based agent Nermin Mollaoğlu, with whom Publishing Perspectives readers are familiar, also has announced that she and three associates will travel to New York for the Rights Fair. 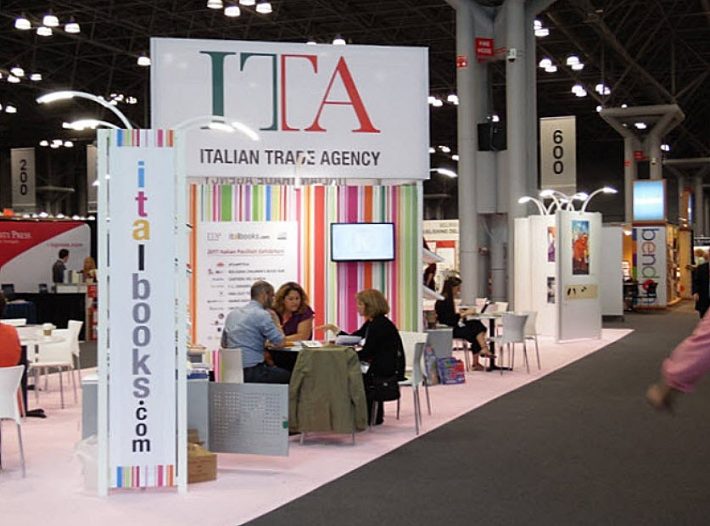 At BookExpo: The Booksellers Play

As Publishing Perspectives reported last year, BookExpo—returning last year to New York in a smaller form from the 2016 Chicago iteration—has struggled for international participation, despite dropping “America” from its name, which the show said was meant to signal more internationalism.

“BEA,” as many still call it, has included messaging about an intent to “strengthen distribution, rights, and international business at the show,” but the actual emphasis this year is on booksellers. The “reimagined BookExpo,” as the company is calling this year’s event, is focusing on what it says will be a more “laid-back, comfortable show,” with “In-Booth Editors’ Hours” added for conversations with bookstores’ buyers.

BookExpo has a schedule of “editors’ hours” here (PDF), and on the show’s Friday (June 1), there are two afternoon hours of “publicist in-book meet-ups,” in which booksellers can meet with publishers to talk about author events. A list of participating exhibitors for the meet-ups is here for booksellers to peruse.

“In our experience as organizers of the Bologna Children’s Book Fair we have always focused on the rights market, which is also the core of our engagement in the creation of New York Rights Fair.”Antonio Bruzzone, BolognaFiere

But as the public-facing BookCon festival of the weekend (June 2 and 3) has grown–it reached its 20,000-person goal last year—and as the exhibitor footprint and international participation have decreased, the companies behind the New York Rights Fair have stepped in to create an outside event attractive enough that the rights players of the industry would hire their tables in the new fair instead of at BookExpo.

BookExpo has made the sensible response of endorsing the new fair. And what many hope is that next year, the New York Rights Fair, positioned as that “official rights fair” of BookExpo, can return to the Javits for the simple advantages of logistics needed by so many who have business at both shows.

There are to be shuttle buses between the two venues. And all parties are talking up the arrangement.

In a prepared statement, Reed’s senior vice president, Ed Several, is quoted, saying, “Over the past year, BookExpo has undergone a reimagination to offer more of the core values that attendees and exhibitors are looking for. … We are thrilled to enter into this relationship with the New York Rights Fair and see this joint agreement as an opportunity to better serve the publishing industry.”

Speaking for BolognaFiere, its general director, Antonio Bruzzone, says, “This relationship was born for the common goal of best serving the publishing industry. In our experience as organizers of the Bologna Children’s Book Fair we have always focused on the rights market, which is also the core of our engagement in the creation of New York Rights Fair. Today, the partnership with BookExpo opens new and exciting opportunities to better support the dialogue between international and American publishing. We’re looking forward to continuing to develop this relationship in years to come as we work together to benefit the industry.”

And for Publishers Weekly, George Slowik is quoted, saying, “We found that there was an opportunity for two events. PW’s unique POV as a horizontal publication, serving the entire industry, paired with the unique relationships that we maintain with both Reed Exhibitions’ BookExpo and BolognaFiere enabled us to foster and develop a strong collaboration between the two events.”

What does this mean for attendees? Many are correctly reserving judgment.

For those whose work is strictly in rights and can stay largely in place on 18th Street, the issue of having to go back and forth between the two venues should be minimal. They’ll miss BookExpo but a lot of good agents can tell you that in heavy rights trading, they get precious little time outside a show’s rights hall, anyway.

For those at BookExpo who need to be in touch with rights players, the issue is trickier. A trade visitor’s BookExpo schedule is a complex thing under any circumstances. Fitting in programming events and/or meetings at a separate venue across town will be challenging, even with shuttle buses—which presumably will add their own layer of scheduling consideration.

This year’s top missed-meeting text of both shows may be, “Sorry, I was at the other place.” 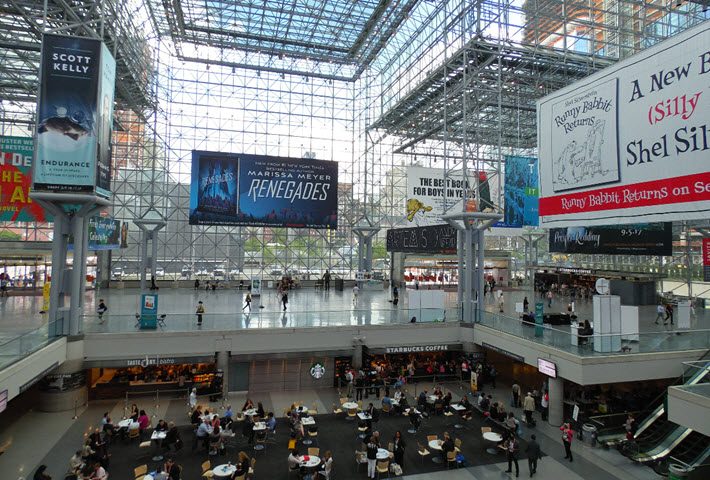