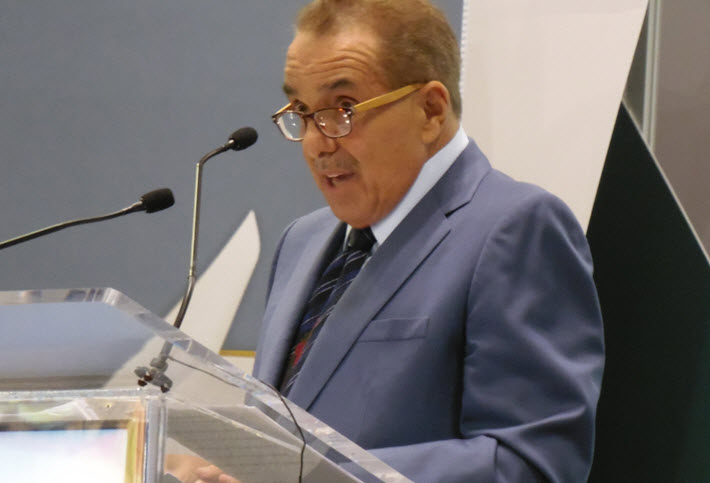 ‘There can never be too many bookstores in America,’ Barnes & Noble chief Len Riggio tells an appreciative crowd at the bookseller-oriented 2018 BookExpo in New York. 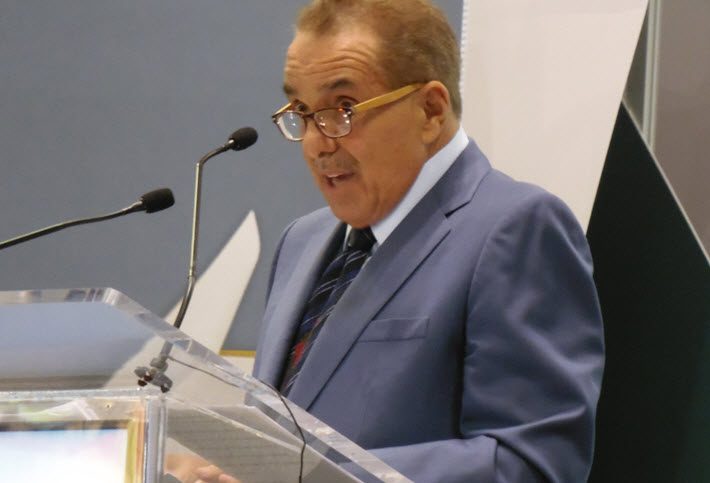 Barnes & Noble CEO Len Riggio had the line of the day on Wednesday (May 30) as he gave BookExpo‘s first keynote address: “I guess I got the biggest crowd in history.”

And it’s a year in which a seasoned BookExpo industry attendee might find surprises waiting.

While Reed Exhibitions’ senior vice president Ed Several exuberantly talked up the show with boundless energy, this is a two-day show again this year, Thursday and Friday, preceded by a limited opening on Wednesday when the ground-level lobby in which you’re used to getting your BookExpo badge was festooned with signage for the International Franchise Expo and the Cannabis World Congress and Business Exposition.

As Publishers Lunch’s Michael Cader has quipped about the latter, “It’s nice to have a growth industry in the house.”

And as if that grass doesn’t always seem greener than publishing’s, another departure awaited Wednesday’s industry BookExpo-goers who gathered to hear Barnes & Noble’s Len Riggio speak: he was introduced, and graciously, by Oren Teicher, the CEO of the American Booksellers Association (ABA).

‘A Vibrant and Healthy Network’ 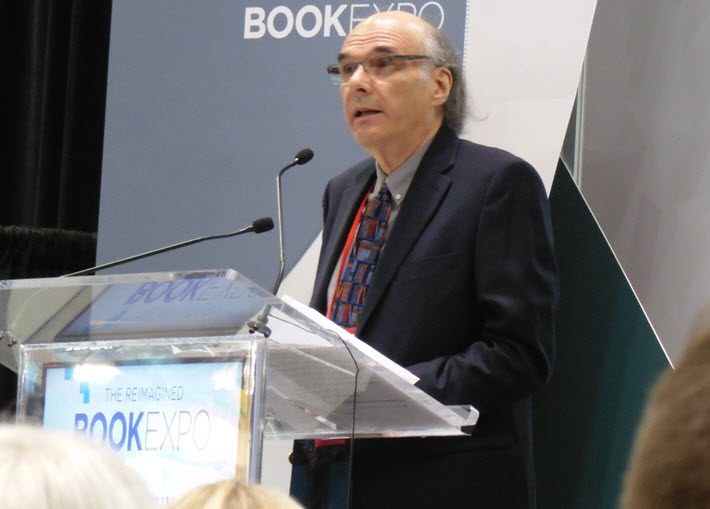 In case the irony isn’t apparent, Barnes & Noble has at times in its history been bitterly criticized for closing the essential mom-and-pop bookstores of the association’s rank and file with its big-box clout. In fact, before Amazon had become retail’s most profitable nightmare, Barnes & Noble was the enemy in the eyes of many independent booksellers.

Teicher did his part to try to bolster Reed’s “reimagined BookExpo” effort by saying that “It’s hardly a secret that lots of industry trade shows in a whole range of industries have had some challenges of late.” He congratulated Several and his team for this year’s emphasis, which is on booksellers and their relationship with publishers—”reimagined,” purposefully, with the bookshop keeper in mind.

And to his credit, Teicher didn’t try to duck the fact that “My standing here, doing what I’m about to do”—introduce Barnes & Noble’s chairman—”would have been impossible to imagine several years ago.”

We all need, however, he said, “to recognize that things change. … The simple fact is that our business is stronger and American readers benefit when there is a vibrant and healthy network of brick-and-mortar bookshops all across the country.”

It’s a good bet that Amazon Books, those brick-and-mortar stores being rolled out by Seattle, aren’t the storefronts Teicher had in mind as he spoke, but he did concede that “In 2018, the Internet has its place,” without going so far as to add that online retail may be, in Cader’s phrase, the place that’s “driving half of book sales or more” in the States.

And as he handed off to Riggio, the keynote’s key line became quickly evident: “There can never be too many bookstores in America.”

Riggio: ‘There Can Never Be Too Many Bookstores’ 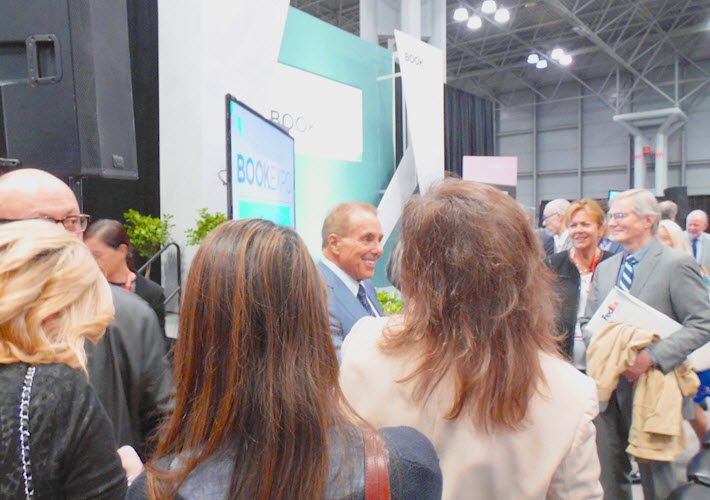 There were between 50 to 100 people standing to hear Riggio speak at BookExpo’s Uptown Stage on the north end of the show floor. Ed Several would later tell Publishing Perspectives that he had put in 200 chairs for the keynote. Even before Riggio began speaking, more chairs were rushed into place and the standing-room overflow attendees stayed put for the full 30-minute event, a credit to the drawing power of this opening perspective.

But with the long, costly decline of Barnes & Noble being another “simple fact,” to borrow Teicher’s phrase, Riggio quickly hit the kind of note that feels almost Greek in its potential to come back and haunt everyone who heard it.

Listing everything from “book kiosks in airports” to “multi-unit organizations such as ours,” Riggio told the crowd, “It follows that we need to open more stores than we close. And Barnes & Noble intends to do its part.”

While Barnes & Noble in its long life has sold more than 6.8 billion books, Riggio told us, David Leonhardt at The New York Times wrote on May 6 what everyone in publishing and finance has known for years while watching the bookstore chain try various error-prone “reimaginings” of its own: “Barnes & Noble is in trouble … And you really see the problems if you dig into the company’s financial statements.”

Needless to say, Riggio wasn’t at BookExpo to parse the problems of the company’s staggered fortunes, but it was at times challenging to hear Riggio wave the flag of physical-store importance without a more frank recognition of the pressures than the occasion could provide.

Such lines as “a single book can change a person’s life,” however true, are the province of motivational speakers and retreat directors. Riggio offered that reassurance, as well as some handsome phrasing: “We are the showrooms for the publishing industry”—a fine concept until you remember that “showrooming” today can mean finding a book in a physical store and immediately ordering it from Amazon on one’s smartphone at a better price than that store can afford to offer.

Nevertheless, however short on financial concerns this keynote understandably had to be, Riggio sounded firmly confident as he offered the mantras of the trade show: “More bookstores equal more demand and more bookstores lead to a more informed public and a more healthy and upwardly mobile society.”

The one plea he made was cordially couched but aimed at publishers and their pricing. “The problem remains,” he said, “that today the average paperback book costs two and half times the minimum wage, as compared to one half the minimum wage when I got started. How sustainable can this be, when Google promises all the world’s information for free? … My dear publishers, serving the mass market is of critical importance to the performance of our industry, precisely because we need to attract more citizens, particularly young people.”

Riggio’s commentary, in short, was largely the pep talk that booksellers are coming to BookExpo to hear, even as the trade show opens without its International Rights Center. That component has been “reimagined” by competitors and is running two miles away from New York’s Javits Center at the Metropolitan Pavilion as the New York Rights Fair, another departure in this year’s events.

And with that as one of the key factors to the unsettled feeling of BookExpo this year, the many trials and errors of the Barnes & Noble saga came uncomfortably to mind as Riggio offered what was probably his most pragmatic and bedeviling remark of his warmly received appearance: “What is clear as a bell to me is that the size, shape and location of tomorrow’s bookstores has yet to be determined.” 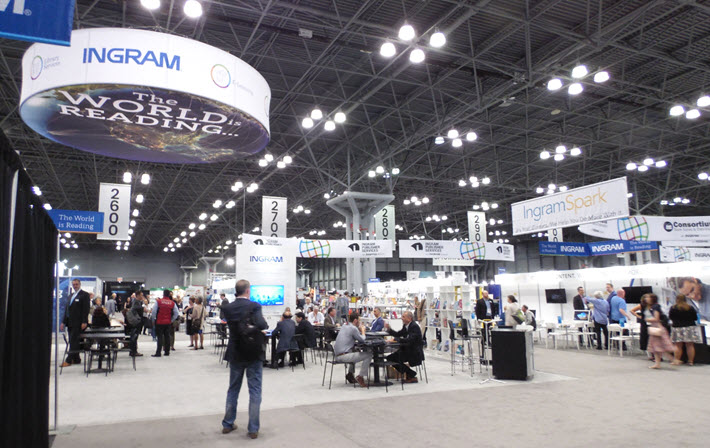