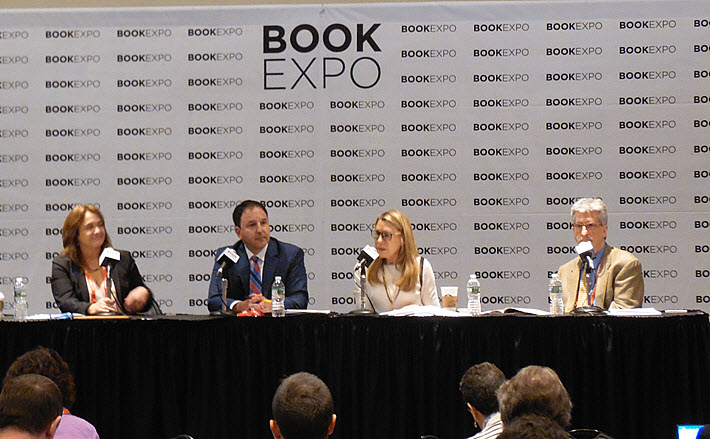 ‘Protect the Works of Authorship’

In her opening comments at BookExpo‘s first of three collaborative panel presentations with the Association of American Publishers, the AAP’s chief Maria A. Pallante firmly set copyright debate into its proper arena: “Good copyright policy is good public policy.”

Copyright policy, when made correctly, Pallante said, “recognizes that authors make the world a more thoughtful, informed, and interesting place and that creative works are valuable to society. Good copyright policy is also sound economic policy.  It gives publishers the confidence to invest and compete in the marketplace, and more generally be a transformative power in the world.”

Pallante was joined on the panel by Authors Guild executive director Mary Rasenberger, by the Copyright Alliance’s Keith Kupferschmid, and by the Associated Press’ Hillel Italie as the session’s’ very able moderator. 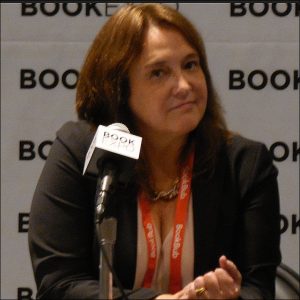 “Fundamentally,” Pallante said, “copyright is about balance. To be rational, it should be flexible enough to encourage innovation and new actors, but strong enough to incentivize and protect the works of authorship that are so central to its purpose.”

Both Pallante and the guild’s Rasenberger have extensive backgrounds in copyright and intellectual property law and policy.

And in her comments, Rasenberger said that while it seems odd to someone like her who has spent her career in copyright law, “Authors spend very little time on it” except when an issue comes up that requires them to defend their work or when their rights are infringed.

‘The Authors Are Not Okay’

“Copyright is the sole mechanism, the foundation of the marketplace,” Rasenberger said, by which “authors can monetize their work in a free market. It’s what makes it possible for authors to make a living writing what they want to write instead of writing what an employer wants them to write.

“Copyright starts with the author. It is an author’s right.” Indeed, in some cultures, she said, it’s referred to as such, as “authors rights.

“But even though it starts with the author,” she said, “in publishing, authors are actually at the bottom of the money chain. And the reason for this is that it’s the one negotiable line in the budget. So when the total money diminishes, it’s the author who suffers. And they are suffering. 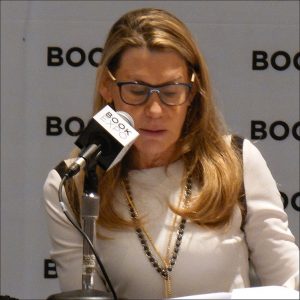 “Wholesalers and retailers get paid their percentages, printers and other vendors get paid, and publishers make sure they make a good profit. They have to, it’s part of the [publisher’s] job, to be sure to make a profit.”

Pointing to the AAP’s first-quarter StatShot report that indicates “publishers are doing okay,” Rasenberger said, “This is interesting because authors are not doing okay.

“There are pressures on the market, and authors are the ones feeling the squeeze. Earnings are way down to unsupportable levels. At the same time, authors are having to do more of their own marketing.”

A survey made three years ago, Rasenberger said, showed that authors “are having to spend more than 10 hours or more per week on marketing” books that publishers don’t support fully with their own marketing programs. Some authors, she said, are having to hire marketing help.

That last round of survey work showed that authors’ incomes from their writings had declined by 30 percent on average since 2009, Rasenberger said. Such revenues for an author on average appeared to be declining from $25,000 to $17,500.

As various copyright hotspots around the world open up—many covered by Publishing Perspectives, and with the Canadian Copyright Modernization Act of 2012 as the most egregious example, currently—various threats to protections for intellectual property are becoming more frequent and concerning, frequently involving fair use exceptions legislated into copyright policy.

As Pallante said, “There is no question that technology informs the law, but sometimes it creates gaps that can only be fixed by rebalancing the interests and equities of all involved.

“This is what Congress has been doing for the past few years, reviewing everything and considering how the law is working and how it needs to be updated.”

“We also rely on the Courts to evolve the law,” Pallante said, “building upon prior opinions and stretching old statutory text to fit new fact patterns.  And the private sector has a role—private actors can help create business solutions or best practices provided these are mutually agreed to and not at odds with public policy.  They also require everyone to come to the table.”

Copyrighted Material: $1.2 Trillion for the US GDP

“We are, right now, in the midst of doing a new survey,” Rasenberger said.

“It’s more detailed” than such efforts in the past, “looking at sources of income and going out to more than 200,000 authors.”

The survey, she said, will be going to those authors within a couple of weeks.

And meanwhile, Kupferschmid’s Copyright Alliance provided some details of the position of copyright-relative factors in the US economy, including: