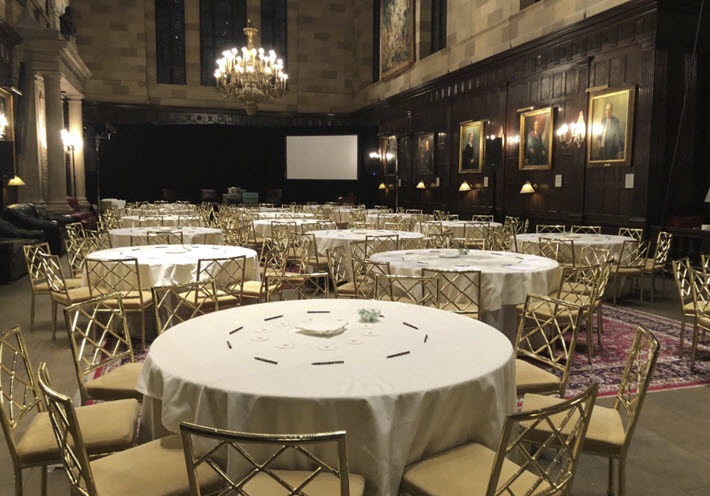 ‘In an industry where everything is returnable, why are we out of stock so often?’ The Book Industry Study Group’s annual meeting tackled questions like this, with a strong focus on the supply chain.

As we watch many in publishing struggling with challenges in metadata—both in the UK and the US—it’s hard not to recall one of the earliest computer-era memes: “Garbage in, garbage out.” It turns out that the digital dynamic intensifies the effectiveness of good metadata and deepens the damage of bad practice: a key interest in this year’s BISG annual meeting. —Porter Anderson

Highlighting changes the organization has initiated in response to industry needs, the Book Industry Study Group (BISG) held its annual meeting on Friday (April 27) at the Harvard Club in New York City.

Key elements of its evolving program include the launch of an association advisory council to foster collaboration; a new call for candidates for board of directors; and a program of 36 events during the year to address challenges in the industry.

The focus of Friday’ meeting was supply chain issues as seen from the perspectives of publishers, distributors, and retailers, along with references to innovators in the marketplace in connecting readers to books.

In his program letter, Brian O’Leary, BISG’s executive director, noted the hurdles publishing has encountered in the last two decades and BISG’s dedication to “avoiding a crisis” by addressing “challenges for the book industry as a whole.”

Ahead of the meeting, BISG had conducted a survey, “The State of the Supply Chain,” which provided some notable responses.

When asked which parts of the industry face the greatest challenges, survey respondents said:

To a question about major areas of concern, the responses were:

And 35 percent of respondents said slowness in adapting and changing was their company’s biggest challenge.

So if publishing needs to keep better track of rights and royalties. And retailers need to differentiate authors. Why doesn't #BISG push hard for ISNI adoption? One number, many uses.

Metadata: A Need for Consistency

Panel presentations affirmed the survey results on the importance of sound metadata, an echo of the alerts issued earlier this year by BIC in the UK about wrongful use of certain metadata fields, as covered by Publishing Perspectives.

Kent Watson, executive director of PubWest—the Publishers Association of the West—told the conference that his publishers are concerned about their metadata, specifically in terms of whether they’re inputting enough information, or even too much, to be useful. Without centralized guidelines and standards, it can be hard to know what information is optimal for publishers to provide and how it helps distributors, retailers, and customers find books.

Predictably, metadata also has become a growing issue for distributors and retailers, with similar needs for a uniform system to track inventory and capture a snapshot view. Retailers use metadata to wade through the hundreds of thousands of books published each year, as Noah Genner, president and CEO of BookNet Canada said—sifting through this sea of titles is one of the biggest hurdles for retailers, and  complete metadata is vital.

“In an industry where everything is returnable, why are we out of stock so often?” asked Dane Neller, CEO of bookstore Shakespeare & Co and founder of On Demand Books.

Neller said there are significant losses in sales for all parties when a consumer goes into a store and can’t get a book he or she wants, and said that print on demand (POD) is the answer: Neller’s On Demand Books is the company behind the Espresso POD machine.

But while POD can produce a book requested by a customer, of course, it doesn’t solve overall issues of the supply chain workflow.

Stephen Day, supply chain SVP with Pearson, discussed a system that company is developing in which each book has an identifier used to track the shipping and returns of each title.  The hope is to better understand the system, detect where it’s failing, and discover ways to reduce returns, a strain on a publishers’ bottom line.

Joe Matthews, CEO of IPG—Independent Publisher Group—said the industry should be investing in data mining and consumer research to make better predictions of sales.

Customers: Identifying and Reaching Them

“Who will our client be in five, ten, fifteen years?” asked Wiley’s Peter Balis. “How do we meet those needs?  How do we get that to market?”

As reader interaction with content changes, Balis said, publishers need to be mindful of those changes and of how to meet them. “Books aren’t the only end game for us,” he said, as he and his team examine how customers consume information.

Oren J. Teicher, CEO of the American Booksellers Association, talked about a growing number of tech-savvy bookstore owners and their ability to connect to customers.

The three women on a panel called “What We Can Learn From Literacy Innovators”—each speaker was awarded BISG’s Industry Innovator Award—highlighted some of their successes.

The most traditional member of the panel was Noëlle Santos, founder of the Readers and Shakers book club and The Lit Bar, a bookstore opening later this year in the Bronx. She said that both things were created to fill needs in her community.  Although Santos’ background isn’t in bookselling or publishing, she wanted to offer a much-needed literary outlet. (The Bronx’s last bookstore, a Barnes & Noble, closed around the end of 2016.)

Running the book club through Meetup and raising money to open the store via Kickstarter, Santos said she has found support inside and outside the community.

Margret Aldrich, media and programming manager at the international Little Free Library nonprofit, has 70,000 free libraries that lend some 45 million books a year.  The goal is to provide access to books to anyone in a community and help with discovery.  Last year, Little Free Library partnered with Chronicle Books on a free library design contest that received 300 entries from around the world and they are currently working on an app that will allow people to find a little free library wherever they are.

Susan Robbins is the co-founder and chair of Project Cicero, an annual nonprofit book drive in New York City, which, since its inception in 2001, has donated more than 3 million books to students in area schools to help make up for dwindling school library collections. When the organization was established, it registered volunteers and communicated with publishers and donors on paper. Today, it does that work digitally, which allows the program to process more donations and expand to San Francisco and New Jersey.

Whaaaat. In a surprising turn of events, I just accepted an Industry Innovator Award for @LtlFreeLibrary from @BISG alongside @bossynbookish and moderator extraordinaire @RachelFersh. Thank you, #BISG! pic.twitter.com/lMssTZJ1IC

Ahead: Considering Blockchain in Publishing

Although blockchain came up in each panel at the annual meeting, how it might be used in the supply chain was never fully addressed.

BISG hosts a webinar titled What is Blockchain? on May 15 at 1 p.m. ET (5 p.m. GMT), which may have more details on how the technology might have application for publishing.