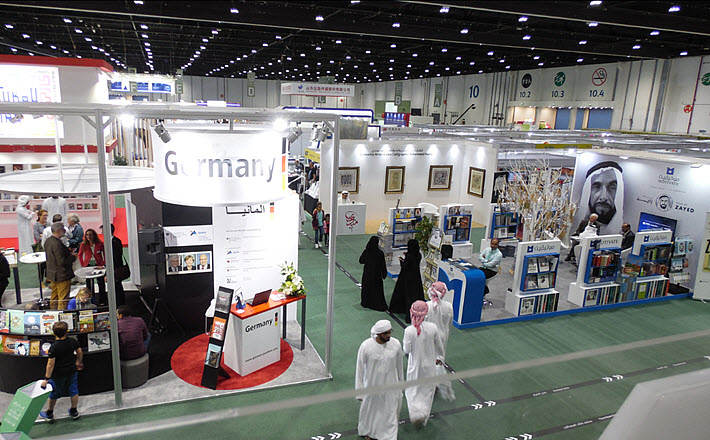 Flora Rees of the Emirates Literature Foundation talks about the editor-author relationship and the role of literary agents in publishing across the Arab world. 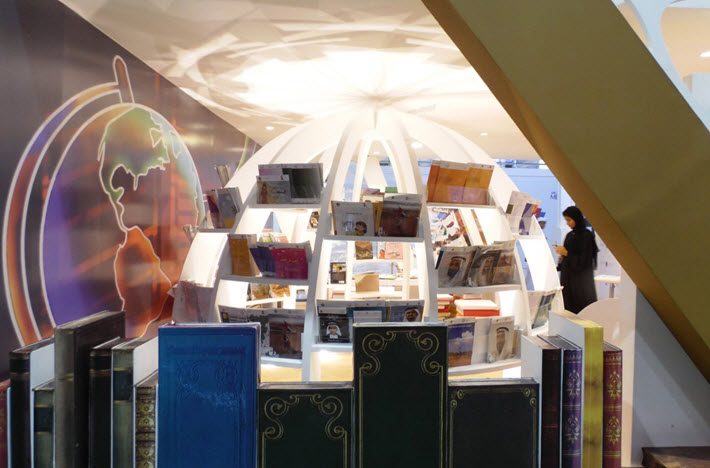 Books and an international consciousness on one of many imposing government agency stands at Abu Dhabi 2018 International Book Fair. Image: Porter Anderson

‘A Lot to Celebrate’

The 2018 Abu Dhabi International Book Fair (ADIBF) closes its weeklong run today (May 1), with more than 1,350 companies exhibiting at the fair this year.

The fair—situated in a giant L-shaped section of the National Exhibition Center—is notable for everything from its clean, spacious design to its towering, complex stands, intense lighting, its 10 a.m. to 10 p.m. hours, and such a strong emphasis on selling books, both to students and to adults.

Culturally, the show’s array of literature from the Arab world this year has been enriched by the focus of the Year of Zayed program, on the centenary of the birth of the United Arab Emirates’ founder, the late Sheikh Zayed bin Sultan Al Nahyan, who died in 2004.

Some common roles in European and Western publishing, like literary agents, and traditions like the editor-author relationship, are different in the Arab world.

And to get a better understanding of them, Publishing Perspectives has spoken at length with Flora Rees, the head of education and publishing for the Emirates Literature Foundation, which has its offices in Dubai. The organization stages the annual Emirates Airline Festival of Literature (in 2019, February 29 to March 9) and has a staff of almost 30 working on its various activities.

The Literature Foundation, in fact, on April 23 won the 2018 Middle East Special Event award in the category of arts and cultural events, and this year hosted more than 5,000 students at author talks featuring Jacqueline Wilson, Anthony Horowitz and Samar Mahfouz Barraj and others. 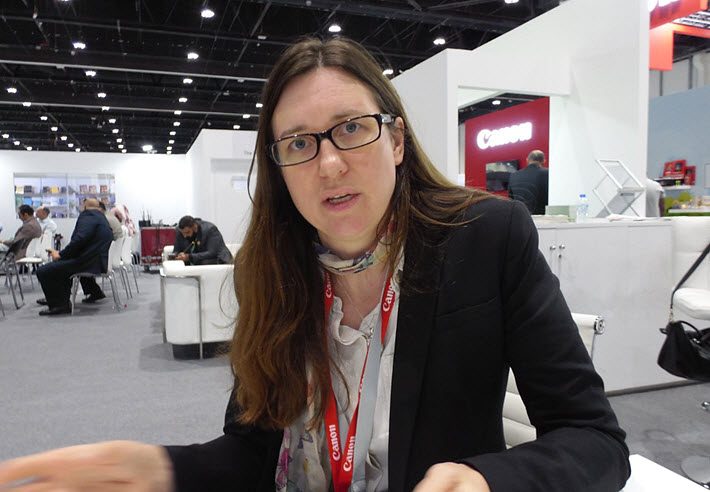 ‘The Need To Develop Skills’

Rees worked in trade publishing in the UK for 16 years, including a stint as a senior fiction editor at Hachette’s Headline Publishing Group.

“The editorial tradition that’s a cornerstone of international publishing elsewhere isn’t yet seen as standard practice in the Arab world.”Flora Rees

“My husband’s job brought us to Dubai in 2015,” she says, and she joined the Emirates Literature Foundation to lead its education, training, and publishing work in 2016.

“There’s a lot to celebrate about publishing in the Arab world,” Rees said in our conversation, which started at the fair’s Business Center and continued during the fair week, “as you can see in the range of titles and numbers of publishers and publishing associations represented at the Abu Dhabi International Book Fair and Sharjah Children’s Reading Festival,” which had its 10th edition April 18 to 28.

“The International Prize for Arabic Fiction and Etisalat Award for Arabic Children’s Literature honor the best of our current writers,” as does the Sheikh Zayed Book Award. “And there are exciting developments in children’s books across the region.”

In terms of challenges in the region, Rees says, “The cost and difficulty of distribution and marketing across countries in the region” are prominent, as highlighted by Mohammed Rashad, president of the Arab Publishers’ Association, during a forum produced by Canon at ADIBF.

Piracy is also a concern, “in varying degrees in different countries,” Rees said, “The lack of a central Nielson-type recording of titles and sales,” for statistical understanding, as well as “the need to develop skills in key areas of the industry” also contributes to some of these challenges.

It’s in that area of skills development that the role of editor in the Arab world becomes an issue.

When taken at the highest view—and from commentary in a panel discussion on book editing at ADIBF, “It seems the editorial tradition that’s a cornerstone of international publishing elsewhere isn’t yet seen as standard practice in the Arab world.” 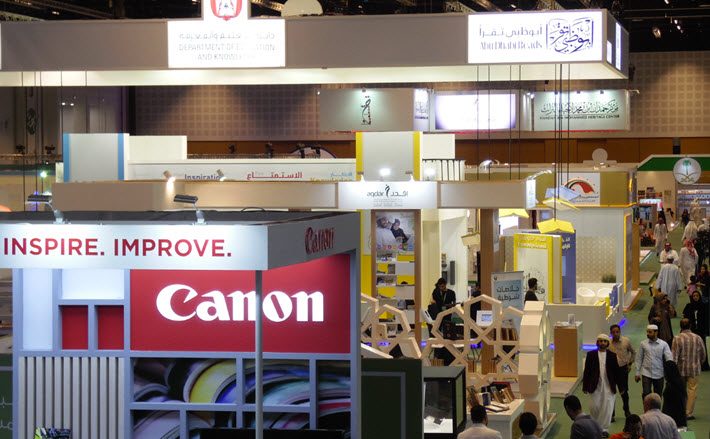 At the 2018 Abu Dhabi International Book Fair. Canon held a forum on the future of the book as part of its exhibition work during the week. Image: Porter Anderson

‘A Dearth of Experienced Arabic Editors’

“This is particularly the case with developmental or structural editing,” Rees says, when asked to expand on the issue.

“While there are of course there are many publishers with excellent editorial departments or support, there does seem to be a dearth of experienced Arabic editors working at this level.”Flora Rees

“That can be crucial in helping writers fulfill their potential to produce the best quality and most engaging books possible. Among other concerns arising from this is the risk that poorly or unedited books could impact negatively on a reading culture many publishers already regard as being under threat from alternative forms of entertainment”—a challenge also familiar in international markets.

“While  there are many publishers with excellent editorial departments or support,” Rees says, “there does seem to be a dearth of experienced Arabic editors working at this level.”

Reasons for the problem could be financial, Rees says. “With print runs often as low as 100 to 300 copies, margins are very tight and many publishers are small operations or one-man shows. Many publishers offer a printing service that doesn’t include editorial work.”

“What’s more, she says, “There’s little professional publishing training available in Arabic outside the programs offered at book fairs. And with few editors in place, access to an apprenticeship-style mentorship with assistants learning on the job is limited.

“During the ADIBF editing panel it was also suggested that many authors would refuse in-depth editing, although personally I’ve had a number of conversations with published Arabic authors who see its immense value and would love to have the editorial relationship they’ve seen fellow writers experience elsewhere.

“My impression is that many publishers would appreciate greater editorial input in their lists, but the available editor pool isn’t yet big enough.” 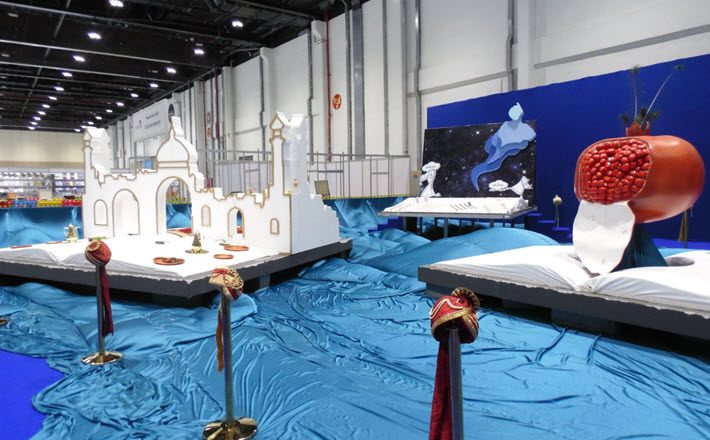 Publishers are long accustomed to chicken-and-egg issues, but you find a very robust one as soon as you ask about literary agents in the Arab world. As it turns out, there are very, very few of them.

“As agents usually work intensively with their clients on their material in advance of submitting to publishers, this should support and benefit the overall quality of publishing.”Flora Rees

“There are very few agents working in the Arab region in the way they do elsewhere,” Rees says, “and the author-agent-publisher relationship seems to be fairly rare.

“Many authors who are agented work with international agencies, and there is definitely a gap in the market.”

However, “I think that the lack of agents in the region has been noticed,” Rees says, “and that this gap in the market will gradually be filled.

“And as agents usually work intensively with their clients on their material in advance of submitting to publishers, this should support and benefit the overall quality of publishing, along with helping find new writers and adding a new professional level to the industry.” 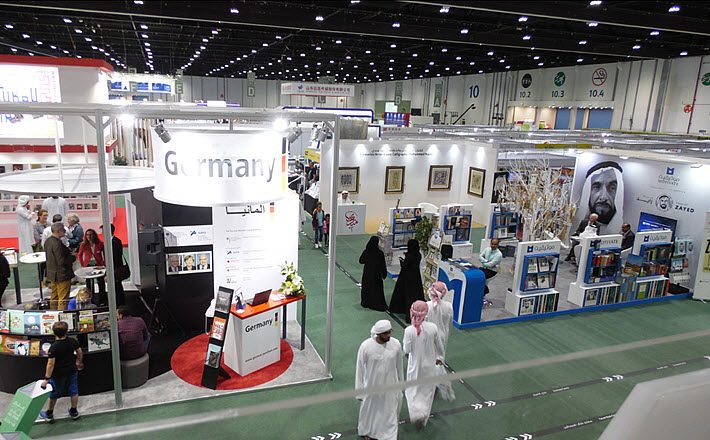 A view of the 2018 Abu Dhabi International Book Fair from the upper deck of the Books from Poland Guest of Honor installation. Image: Porter Anderson

“While a lot of work is required to turn around the current situation,” Rees says, “I think the general need for quality editorial skills is being acknowledged,” and that’s an important starting point.

“Higher education publishing courses in the region’s universities, to include editorial skills, would be a huge benefit.”Flora Rees

We found that many professionals in the Arab industry are concerned about the rising impact of editorial challenges but say that tackling it head-on is difficult.

“Promoting editors’ value remains necessary,” Rees says, “along with finding people keen and able to do the job. The response to the workshop on editing held during the 2018 Emirates Literature Festival was encouraging, as was the popularity of similar workshops at last year’s publishing conference.”

At Canon’s forum on the future of the book during ADIBF, “a group of publishing professionals from across the region and further afield discussed current concerns in the industry, including how to kick-start positive and effective editorial skills, developing professionals able then to train the next generation,” Rees says.

“Cross-company mentoring programs have the potential to help,” she says, “along with accessing funding to attend established publishing courses internationally in English or other languages until robust training programs are available in Arabic.

“I believe the essence of editorial skills is the relationship with the author and a deep understanding of how to work on a text rather than the language.

“Potentially, higher education publishing courses in the region’s universities, to include editorial skills, would be a huge benefit. In the meantime, developing effective and in-depth workshops and masterclasses is a must, along with further research to establish the key areas publishers want to address.”

More from Publishing Perspectives on Abu Dhabi International Book Fair is here. And more of our coverage of the United Arab Emirates is here.