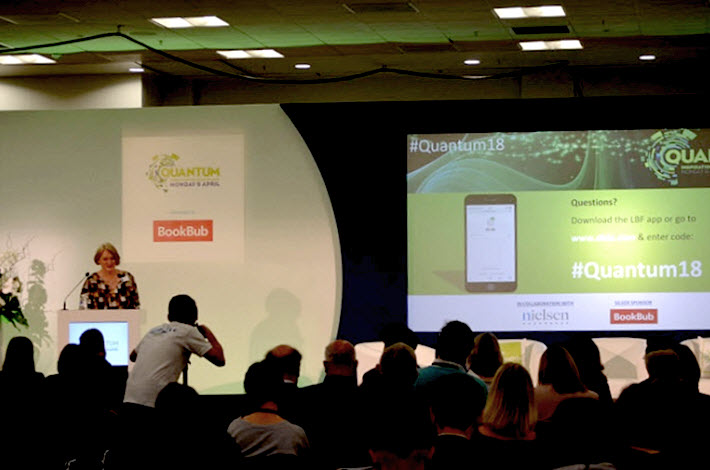 Much as the afternoon focused on publishing’s return to audiobooks as a growth center in the business, London Book Fair’s Quantum conference audience was encouraged to review its assumptions.

Delegates at publishing conferences are accustomed to young innovators—often from the United States, and always walking as they talk, not stuck behind the podium—telling them that they need to reinvent their businesses.

What they’re not so used to being told is that today is the best time to be working in the industry, that they should be proud of what they do, and that what they do has real value.

But that was the uplifting ultimate message of the keynote address given at Monday’s (April 9) Quantum Conference in London by strategist Tom Goodwin, executive vice president and head of innovation for the corporate media-services and branding agency Zenith Media in its New York City. Quantum is the annual pre-fair conference event of London Book Fair, directed by Orna O’Brien. The fair itself now runs through Thursday (April 12).

Goodwin, whose book Digital Darwinism: Survival of the Fittest in the Age of Business Disruption is just out from Kogan Page, spoke on “New Rules of Business and New Waves of Storytelling in the Post-Digital World.” His stage manner was gentler, emotionally warmer than might have been expected, supportive of his appeal to attendees that they stand back and see where they are before throwing everything up into the air in a presumption that things are going wrong.

Goodwin is good at demonstrating how what appears to be new and “cutting-edge” can actually be simply something old dressed in new clothes. He’s a fan of baseball gloves and put up a slide of pen-and-ink illustrations of some, from an early-20th-century Sears, Roebuck catalogue. Next to that, he put up a slide from Sears’ current site, with blurbs and prices:  A century separated the two sales approaches but there was little difference in them.

Goodwin’s position is that we spend too much time worrying about new gizmos, and not enough about what they mean.

“Progress comes from rethinking around new technology, behaviors, and possibilities,” he said.

“When you rethink business around the possibilities of the new, that’s when things happen. This is what happened with Airbnb and Uber”—although he pointed that most people in the world still haven’t used either. He also pointed out that much of what we do simply hasn’t changed: ordering a glass of beer from a barman, for example.

In digital: ‘Everything Becomes a Storefront’ 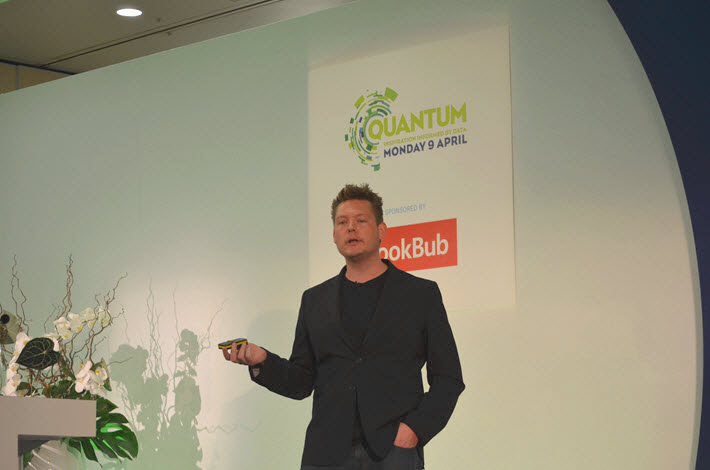 Goodwin said he believes that we’re in a “mid-digital age,” which isn’t quite as slick as we’d like it to be. He referenced “the blue screen of death” at airports, when an airline’s software goes down, and the infuriating pop-up ads on the Internet. He also pointed out the relentless pace of change and said that we’re witnessing what he calls “a return to calm media.”

He said, “The continued popularity of books and particularly physical books is a strong counter-trend” but pointed out that that “the role of the bundler has been removed.” By this, he meant that you no longer need a department store to “bundle” goods for you because “e-tailers can do that,” for us today. And in a digital, mobile environment, “Everything becomes a storefront.”

But in a disintermediated world—in which the middleman has disappeared—there’s also opportunity, a “democratization of creativity,” he said, which means that “the role of the curator has never been more important. The role of the news editor, the role of the publisher, and the value they add have never been greater.”

The futurist would leave us with a couple of interesting predictions, too. “In 20 years’ time ,” Tom Goodwin said, “we’ll be nostalgic about passwords, and about smoking too.

“Did we really put things in our mouths and set fire to them?” 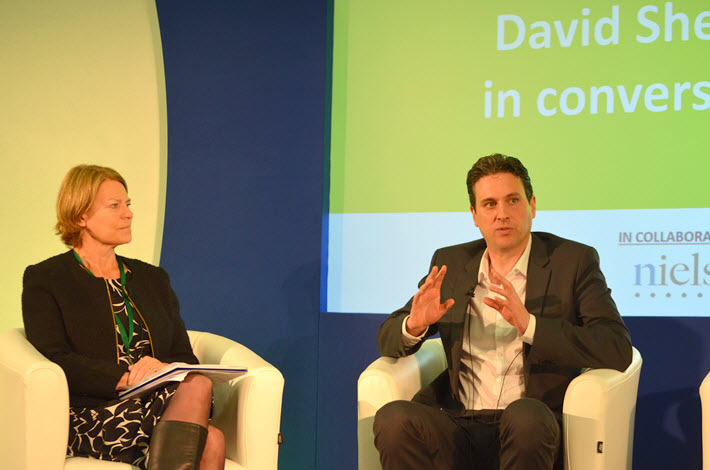 With Goodwin’s hopeful tone resonating, Hachette UK CEO David Shelley came to the stage in a second keynote sequence for a conversation with Jo Henry. Formerly vice president of analytics with Nielsen, Henry has left the company this spring and in a new consultancy role includes among her clients BookBrunch, a UK-facing publishing newsletter, serving as its managing director.

Hachette’s Shelley is good at surfacing contradictions in the marketplace and used his time with Henry onstage to focus on how some things have turned out differently from what some predicted.

“There’s been some digital fatigue out there,” he said to Jo Henry and the audience.

“We’ve published a good number of titles by YouTubers, as have other publishers, and we thought they’d work well as ebooks.  But it turns out that millennials want them as physical books, as merchandise—they’ve gravitated back to print.  And in fact, it’s been older people who have been more excited about the possibilities of ebooks.”

Audio has a golden future, he said, and could be “central to our business in five years’ time. Lots of people listen to audio who don’t read books. We’re getting there with it, but it’s still an untapped market.”

Gender Pay, Diversity: ‘No One Can Feel Smug’ 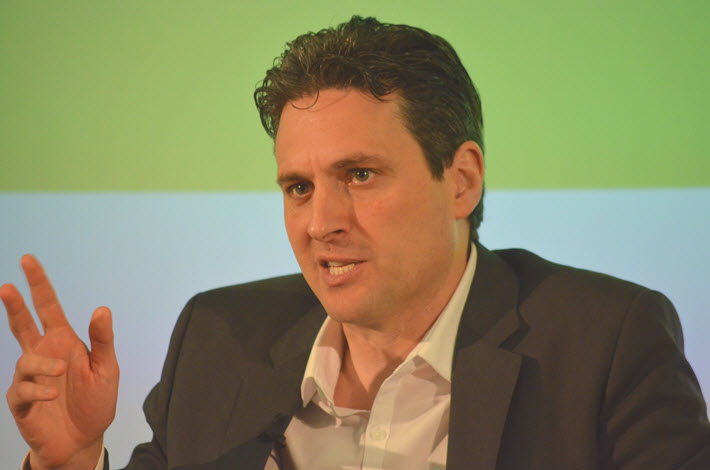 It’s been a difficult month for Hachette, as it has been for most publishers, as the UK’s governmente-mandated reports on gender pay gaps at companies of 250 or more employees have revealed, for the first time, the actual and often woefully wide disparity between what men and women are paid in publishing and in other industries.

“We have a problem that women from BAME backgrounds are paid worse and we want to use the negative data we’ve assembled as a positive opportunity.”David Shelley

As The Bookseller’s Natasha Onwuemezi has reviewed in her own writeup, the Hachette Ltd. report was particularly tough, revealing that the median pay gap gives women 24.71 percent less money than men, a mean gap that’s even greater, 29.69 percent. In bonuses, the distance between what women and men make there is even worse: a median advantage for men is in place, showing them making 62.64 percent more than women on bonuses.

Interestingly, for the Hachette Group, which embraces the company’s distribution arm, the figures are happier, showing a median 1.32 percent in women’s favor, a mean of 14.18 percent favoring men.

Onstage, Jo Henry raised the sensitive issue, not just of the pay imbalance between genders but also of inclusivity and diversity challenges in publishing’s workforce and output.

Shelley was forthright in his response.  On pay, he said, “First of all it’s important to be transparent about this, and to follow both the spirit and the letter of the law. No one can be feeling smug about this. It’s encouraging that it’s out in the open now.”

And as for diversity issues, “In publishing,” Shelley said, “we have a problem that women from BAME [black, Asian, and minority ethnic] backgrounds are paid worse and we want to use the negative data we’ve assembled as a positive opportunity.

“I would encourage everyone to sign up for unconscious-bias training,” said David Shelley. “We all have unconscious bias and it’s an indication of why society is in the state it’s in.” 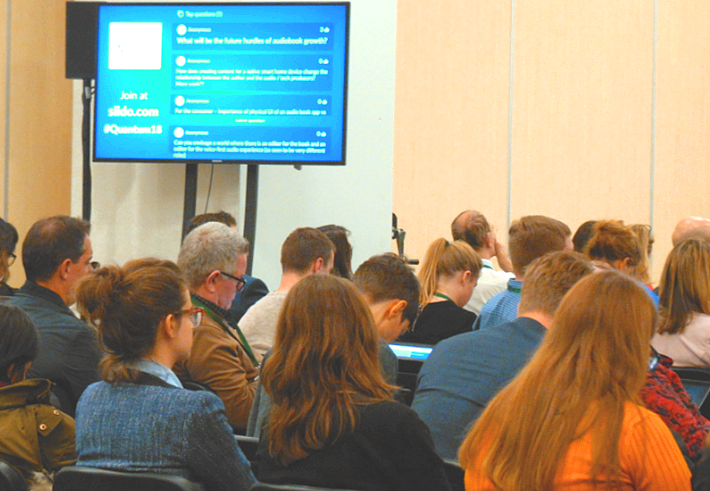 O’Brien’s programming for the afternoon at Quantum followed a trend set by The FutureBook’s structure for the past two years. In that conference, produced by The Bookseller in December each year, a discrete strand of programming has been devoted to audiobooks, which are enjoying favorite-format status as the one dependably rising sales sector for publishing in both the UK and the States.

Audiobook sales are indicated by Nielsen’s data to have doubled in the UK in the past fie years. And in that market, Nielsen is reporting a heartening rise in audiobook sales to male listeners aged 25 to 44. This is encouraging because the industry, which is staffed at levels of some 80-percent women, tends to serve primarily female readers, and if audio can bring more male customers to the content, then a usually unreached consumer segment may be finding more interest in publishing’s offer.

Nielsen reports that audiobook sales also have outperformed in genres including sci-fiction and fantasy, classic fiction, self-help, history, and science.

Monday afternoon in the Olympia London conference complex was given to commentary from several panelists on the topic. And while the theme is clearly one that an industry conference planner must serve, it doesn’t necessarily lend itself to extended discussion easily.

The revival of interest in audiobooks, after all—and however clearly welcome, of course, in sales—has much less to do with the format itself than with the digital dynamic’s enablement of the form. Users once had to use hard media, those cassette tapes and then CDs, to listen to recorded renditions of books. Once digital had made download and streaming ubiquitous, that content-delivery barrier fell away.

Today audiobooks are newly popular not because the consumer suddenly determined three years ago that she wanted to listen to a book, but because she found that the hassle of tapes and CDs was gone and that audiobooks are as easy as streaming music, film, and television to procure: it’s on phone. It’s also on those voice-activated devices like Amazon’s Echo/Alexa and Google’s Assistant, sometimes called “smart speakers.”

What was most instructive during the afternoon’s hunker-down on audio was audience questions and comments, displayed during the sessions with the Slido system. It became clear that even after years of encouraging sales in audiobooks, many in the industry are still at a rather basic point in their thinking about the form, which is a couple of decades old, after all.

Some of the points raised from the audience:

For the most part the answers here are less nuanced than some in the audience might have expected. An audio rendition of a book is created, in most cases, for all listening uses, much as a work of music is created in a studio, mixed, recorded, and distributed to sound the same way at the gym as it might in the library.

The relative importance of narrators who voice written content was an interest to some in the audience, and the point was made by Mary Beth Roche of Macmillan Audio that in some markets, an actor can become known as “the voice of” such-and-such author’s work. This might be the case, for example, for the German actor Wolfram Koch, who performed extended passages, with great impact, of Dan Brown’s Origin, during the author’s appearance last October at Frankfurter Buchmesse.

On the whole, though, the real story about audio’s renewed energy in the marketplace is that of the digital delivery that enables its newfound popularity.  And with so much conference focus going toward the topic, it might be worthwhile to listen, of course, to quiet voices, not always welcome, that suggest what lies ahead—as with so many such popular developments—is over-saturation of the consumer base. 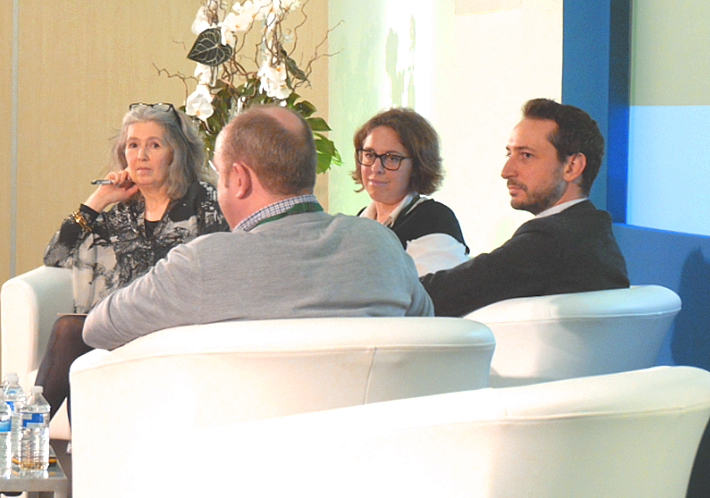 More from Publishing Perspectives on keynote speaker Tom Goodwin is here. And more on London Book Fair is here.