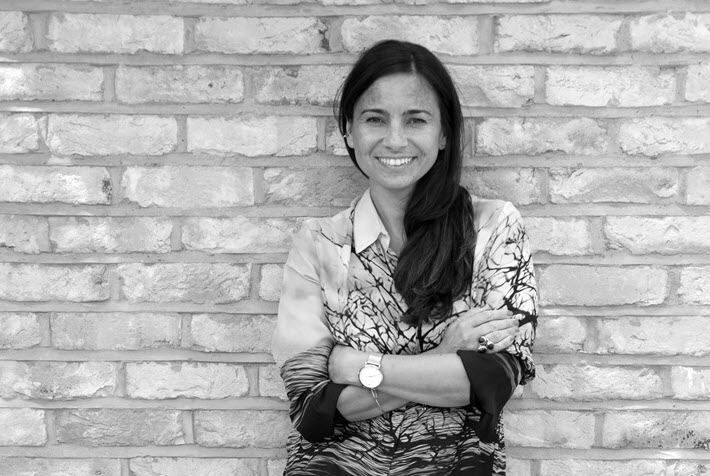 At next week’s Publisher’s Forum from Klopotek in Berlin, designer-author Paula Zuccotti will engage in a potentially pivotal ‘fireside chat’ about what it means to publishing that ‘Everything We Touch,’ is competing for our attention. 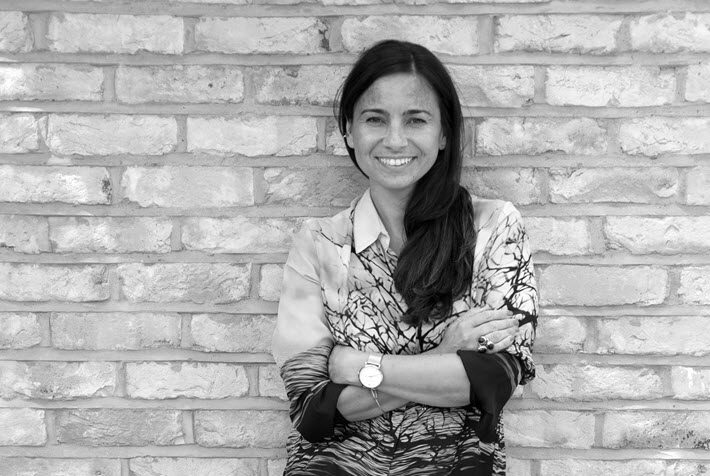 ‘Understanding What People Actually Are Looking For’

In Berlin’s annual Publishers’ Forum conference, one of the most anticipated events has become the “fireside chat” at the end of the first two days (April 26 and 27). In the quiet of that late-afternoon conversation, the program director, Vienna-based consultant Rüdiger Wischenbart, talks with someone whose perspective brings new insights to the viewpoints of Western publishing leaders.

For example, in last year’s conference, Wischenbart was joined by London Book Fair director Jacks Thomas, Turkish literary agent Nermin Mollaoğlu, and Iraqi author Najem Wali about some of the most challenging aspects of the diversity debate amid geopolitical pressures. 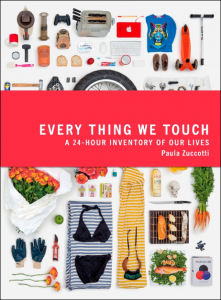 This year’s fireside chat is with the Buenos Aires-born, London-based author Paula Zuccotti and introduces the sort of canny observations that design thinking can bring to so many industries. Zuccotti, whose core career is in industrial design, worked with an international selection of people in many walks of life for her Everything We Touch project (2015, Penguin / Viking), which she calls “a 24-hour inventory of her lives.”

With the precision of an ethnographer and the curiosity of a kid, she had people lay out and then photograph everything they’d touched in a typical day. Suddenly, the world of “things,” if you will, jumped out in sharp relief, creating a peculiarly poignant look at life from the standpoint of the objects with which we surround ourselves.

At her Tumblr site, you can find commentary from folks whose lives Zuccotti inventoried—one of her liaisons has been with IKEA, not surprisingly, and in appearances with players from that home-furnishing giant, she has discussed “they myth of minimalism” in present-day life, and more.

And in a sense, this year’s Publishers’ Forum—which is a company of software giant Klopotek—has been devised by Wischenbart as an examination of the what-comes-next effect of an industry’s digitization. Becoming aware of what we’re doing in publishing is the first requirement. Can we sort out just what we “touch” each day? Where are our assumptions? What ideas do we believe we need to embrace, which do we ignore, are we conscious of our decision-making?

With so much of publishing now past the main transformation’s trials, the industry can start to pick and choose where to place its concentration amid the offers of “new technologies.” These are the important discussions we could hear at and around London Book Fair last week, as a growingly savvy industry leadership learns to question whether—just as an example—they should worry about Virtual Reality as much as they might look sharp at those “nearby” entertainments of film and television that some say are taking the storytelling lead away from books.

For those contemplating being at Publishers’ Forum this year, quick registration is advised before space in at Berlin’s DBB Forum is sold out. The full two-day agenda is here. And the roster of speakers for the two days is here.

And Publishing Perspectives has spoken with Zuccotti from her Wimbledon offices ahead of her appearance next Thursday (April 26) in Berlin, to see where she finds her ethnographic experiences in design intersecting with publishing’s needs and potentials. 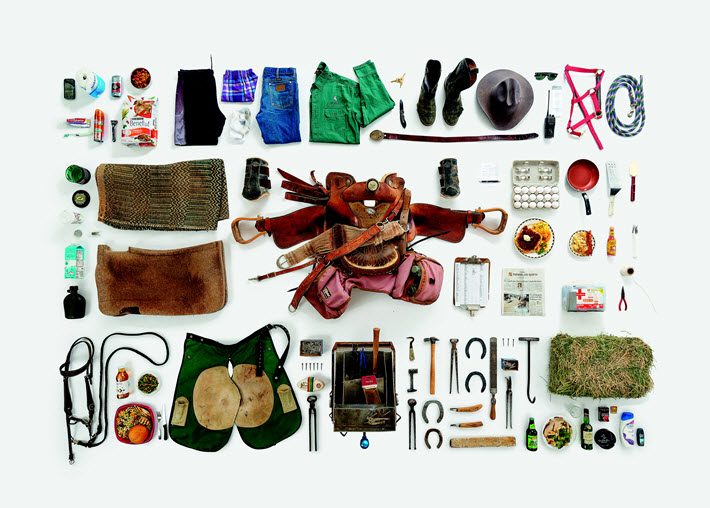 From Paula Zuccotti’s ‘Everything We Touch,’ the objects used in a day by David, a 23-year-old American cowboy in Tucson, Arizona

‘Everybody’s Looking for Something’

“It’s always at the same level,” she says, in terms of the sort of essential inquiry her work—and publishing’s—involves.

“It’s hard to discover what we really need–we actually need filtering between ourselves and the bookstore.”Paula Zuccotti

When she looks at the overwhelm of today’s consumerist landscape, she says, “It’s not just a question of how much time they have to spend, people are all the time seeking for inspiration and communication. That can come from a wonderful book. That can come from something they find on Instagram. So at the level of how the consumer is experiencing that, everybody’s looking for something. And sometimes they get it in a different form” than they, or we, might expect.

The point, she says, is how easily we can forget that “we have to understand what people actually are looking for,” if we’re to respond meaningfully to them as consumers.

“We’re all looking for some form of stimulus. So many ways stuff can be done today—all the options we have today, to get so many stimuli into your life. That’s one of the biggest competitors” to reading, Zuccotti says, “that I’d say we face today.

“Secondly, there’s so much material there. Really, really good stuff. And really, really bad stuff. And it’s really hard to filter. It’s hard to discover what we really need—we actually need filtering between ourselves and the bookstore.” 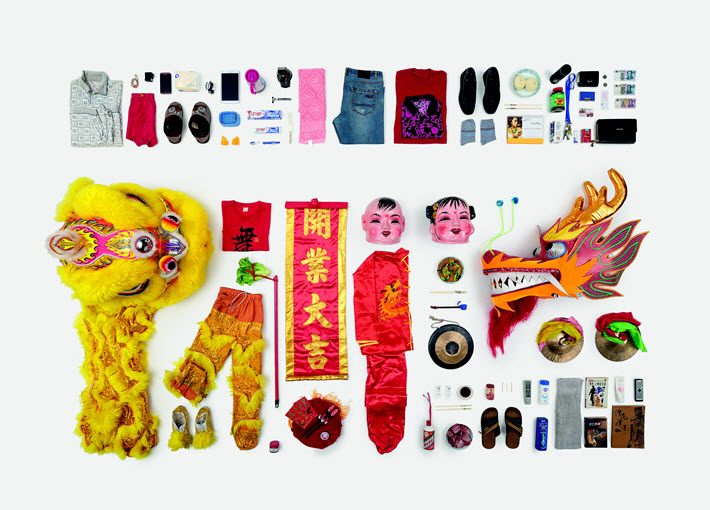 From Paula Zuccotti’s ‘Everything We Touch,’ the objects used in a day by 50-year-old Wang, a lion dancer in Shanghai

Before you say, Hey, Zuccotti is a designer, what does she know about publishing? remember that she’s also an author whose experience of entering the world of books as a writer has been with the world’s largest house. What was her experience? Exactly that marketing overload that you hear so many veteran authors talk about today, in which publishing houses are so awash in content and so overrun by their own frantic publishing schedules that only the very biggest blockbusters are given genuine marketing programs to sustain and propel a book in the marketplace.

“People are all the time seeking for inspiration and communication. That can come from a wonderful book.”Paula Zuccotti

“With Penguin, they put a post on their Facebook channel saying my book was coming,” Zuccotti recalls, as the publisher neared the book’s launch. “And I said, ‘Hey, could you make another post?'” and her marketing contact from the publisher told her, “I have something like 15,000 books, every book gets one post.”

She laughs, of course—what else can you do? “And I don’t blame Penguin,” because every publisher is wrestling today with how to balance output and marketing support. “But yeah, the experience” of the culture’s overwhelm “is going to conferences and having people say, ‘Oh, you have a book, is it out yet?'” three years after its release.

Flipped around to the consumerist stance, of course, this is the blur of over-abundance, that “wall of content” which can cause a buyer to miss the very title that might mean the most to her or him. 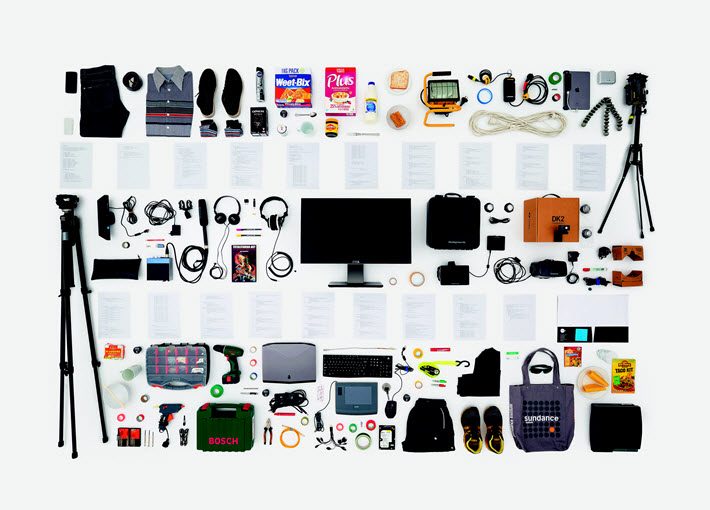 From Paula Zuccotti’s ‘Everything We Touch,’ the objects used in a day by Oscar, an artist, aged 37, in Melbourne, Australia

In working on one account with Starbucks, Zuccotti says, one of her assignments has been looking for just what Google offerings might mean the most to customers at one of the company’s ubiquitous coffee shops. The two companies were exploring working together and asked her to study the opportunities. This search for collaborative possibility, she said, led her to such eye-opening concepts as package delivery for coffee-company customers.

“If you’re working at a Starbucks,” she says, “and you need to receive a package from Amazon, what if you can have that package delivered to you right there at the coffee shop?”

This is the kind of synergy Zuccotti is trained to look for. “You’re there and your Amazon man or your FedEx guy comes to you there. So many ways you can think of making somebody’s life better by what you’re doing” in the corporate concept of the consumer’s needs.

One clue comes across in a conversation with Zuccotti. She’s not living and working in the heart of London, and deliberately. In Wimbledon, she says, there’s just enough remove from the fray that she can think and work.

And that may be exactly what the consumer is looking for next time she sets out for a new book. 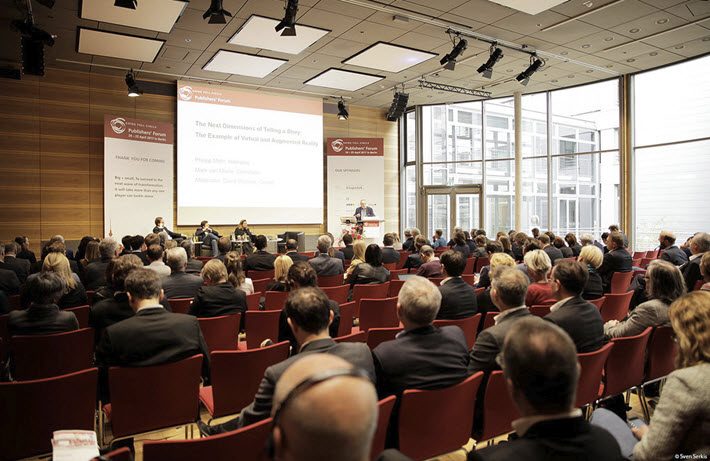 More from Publishing Perspectives on Publishers Forum is here.