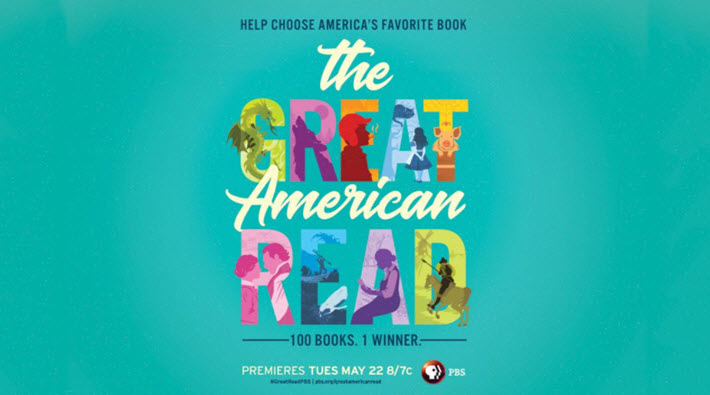 Quite different in its approach to a national reading-advocacy event from ‘Canada Reads,’ PBS’ ‘Great American Read’ project has named its 100 contenders for ‘best-loved novel.’ 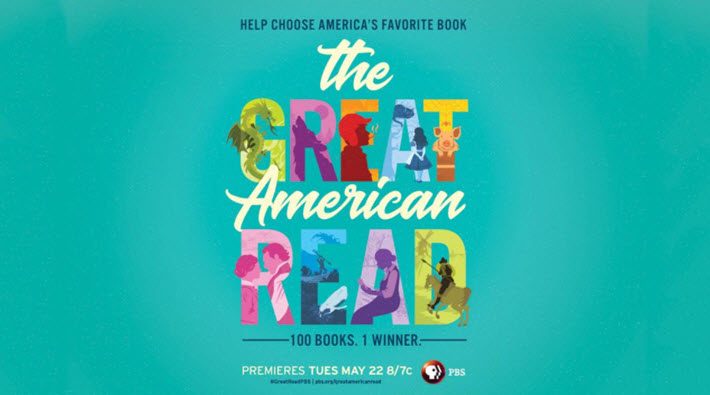 A ‘National Celebration of Books’

When Publishing Perspectives reported on the announcement of PBS’ The Great American Read program—a combination of roadshow television series and reader-vote interaction—we noted that there appeared to be key distinctions between it and the annual Canada Reads program.

With the release Friday (April 20) of the 100 titles the Stateside program is has listed in its “new PBS series and multi-platform initiative that celebrates the joy of reading and the books we love,” it become apparent just how deeply different the two approaches are.

The 17-year-old annual Canada Reads from the Canadian Broadcasting Corporation (CBC) selects five contemporary works, each “defended” by a celebrity personality in four deeply serious, issue-driven debates seen and heard on a variety of platforms in a single week in March. It’s a powerful evocation of how forcefully literature can help reflect and enrich a nation’s political and cultural dialogue.

By contrast, the new US show is positioned as a “nationwide summer reading initiative” to choose “America’s best-loved novel” and in press materials dubs itself “the most expansive national celebration of books and reading aimed at engaging multi-generational readers across platforms ever created.”

And now that we can see the 100 titles put forward for the American show, it’s clear that there’s little comparison with the Canadian effort. The program is being produced for PBS by Nutopia, the documentary-led production company founded by Jane Root, formerly president of Discovery Channel US.

Canada Reads searches for what its producers call “the title the whole country should read this year.”

By contrast, The Great American Read, looking for a “best-loved” standout, might be positioned as saying, “Read anything, absolutely anything, just read.” You have Crime and Punishment and Fifty Shades of Grey on the same list; The Da Vinci Code and The Grapes of Wrath; Siddartha and I, Alex Cross. The Canadian effort is advisory, the American one is populist.

The television aspect of The Great American Read involves a two-hour opening show to air on May 22 on PBS affiliate stations, then, after summer tapings of “entertaining and informative documentary segments,” the show returns in the fall for six one-hour episodes led by NBC News correspondent Meredith Vieira, formerly of The View and Today and the syndicated edition in the States of Who Wants To Be a Millionaire.

The audience-engagement element already has begun, in a sense, in that PBS’s media materials tell us that its 100 titles were chosen in “a demographically representative national survey,” a public opinion poll said to have been answered by some 7,200 people and conducted by YouGov. That’s a ratings site followed by some for its President Trump Daily Job Approval ranking and featuring, at this writing, the article “Most Americans Are Not Concerned About How Their Daily Lives Affect the Environment” for Earth Day.

In a prepared statement, PBS’ president and CEO Paula Kerger is quoted, saying, “With The Great American Read, we will leverage our combined broadcast and digital presence, along with the strong local connections of PBS member stations, to inspire a national conversation about beloved books and the power of reading.”

The 100 titles are by authors from 15 countries, and cover five centuries of writings, from Cervantes’ 1603 Don Quixote to the National Book Award finalist Ghost by Jason Reynolds, a 2016 children’s book. An author can be represented in the list only once, and a series counts as a single entry.

Many local affiliates are expected to engage their community viewers in events on the ground, as social-media efforts carry on, online. Voting at the show’s site will ultimately establish what the program will call “America’s best-loved novel” in the autumn.

More from Publishing Perspectives on reading is here.