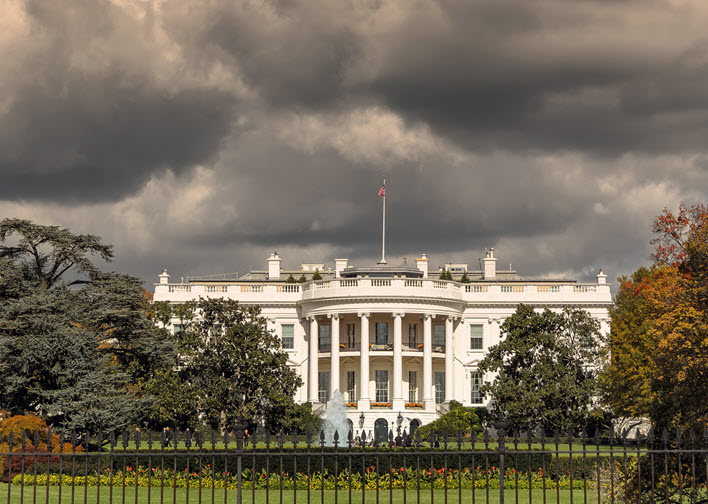 A treatise on making moral decisions in an immoral age–or the excuses of a man Donald Trump calls a “slimeball” who “always ends up badly and out of whack”–the new James Comey book is out now from Macmillan, which published ‘Fire and Fury’ earlier this year. 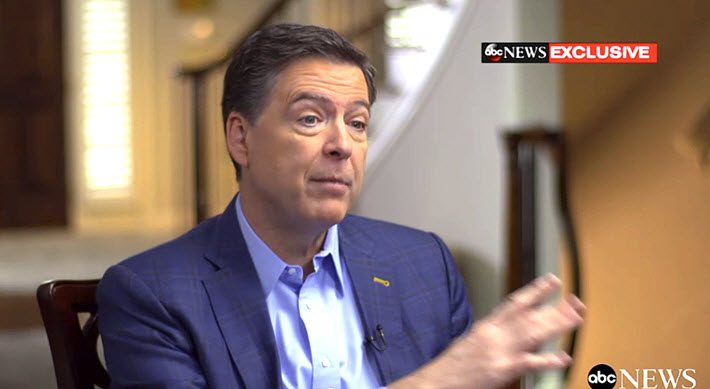 James Comey in his exclusive interview with George Stephanopoulos for ABC News aired April 15. ABC has posted a transcript and excerpts here. 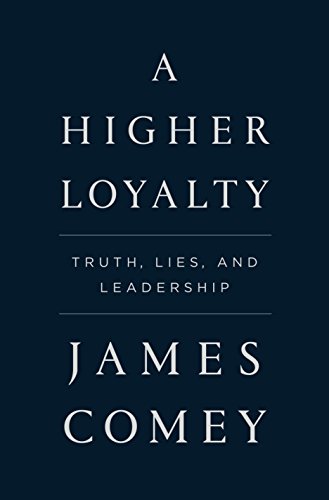 Regular readers of Publishing Perspectives will recall the intriguing entry into the market in January of Michael Wolff’s Fire and Fury. Our coverage tracked the ramp-up both of interest and of the response from the publisher: not only did Macmillan’s John Sargent stare down Donald Trump’s efforts to quash the book with an anemic “cease and desist” effort, but the publisher worked hard to boost production from an initial print run of 150,000 copies.

Today, more than 2 million copies of the Wolff book reportedly have been sold across all formats.

In the case of James Comey’s A Higher Loyalty: Truth, Lies, and Leadership—which releases today (April 17) in the United States and in the UK—Macmillan clearly has seen the math on the wall. Indeed, the book was scheduled for the typical Thursday release in Britain, but media members were notified on Monday that Macmillan would move up the release to today, to time with the Stateside release.

And according to a report from Brian Stelter, CNN’s senior media correspondent and host of the weekly show Reliable Sources, Macmillan has ordered an initial US print run of 850,000 copies.

In the book, Comey describes the Trump White House and its dynamics, in part, this way:

“The silent circle of assent. The boss in complete control. The loyalty oaths. The us-versus-them worldview. The lying about all things, large and small, in service to some code of loyalty that put the organization above morality and above the truth.”

Call it lessons learned, and interesting ones they are for publishing industry players. “Comey’s book is shaping up to be the second political publishing industry sensation of the year,” Stelter writes. “It is already guaranteed to be a bestseller based solely on the number of pre-orders.

“Both books come from the same publishing house, Macmillan, but from different divisions. Macmillan has acknowledged that it didn’t fully anticipate the interest in Wolff’s book. Neither did booksellers. That’s because the Fury furor came out of nowhere in January, when excerpts from Wolff’s explosive book leaked out and the president’s legal team tried to halt publication.”

As for the Comey book releasing this week? Preparation time and a better understanding of the surge of consumer interest in Trump-related titles of this kind have paid off. “This is the largest first printing we’ve done so far this year,” Macmillan president Don Weisberg tells CNN.

And while it’s tempting to say that the main driver of sales is the complex moral and political set of issues raised by Comey, the former director of the FBI fired by Trump, the “Bookseller in Chief” has returned to help power sales by drawing attention to the book with his tweets.

Over the weekend leading to the release of the book, Trump alternated tweets about his personal attorney Michael Cohen’s precarious legal situation, the Syrian airstrikes, and Comey. On Sunday alone, Trump tweeted five times about Comey’s book. His favorite nickname for Comey now seems to be “slimeball.”

Unbelievably, James Comey states that Polls, where Crooked Hillary was leading, were a factor in the handling (stupidly) of the Clinton Email probe. In other words, he was making decisions based on the fact that he thought she was going to win, and he wanted a job. Slimeball!

I never asked Comey for Personal Loyalty. I hardly even knew this guy. Just another of his many lies. His “memos” are self serving and FAKE!

Slippery James Comey, a man who always ends up badly and out of whack (he is not smart!), will go down as the WORST FBI Director in history, by far!

Nevertheless, as the Comey book moves to market, many will be watching to see how this one flies. There are, as Stelter points out, deep differences between the two.

‘To Crush My Dreams. Again’ 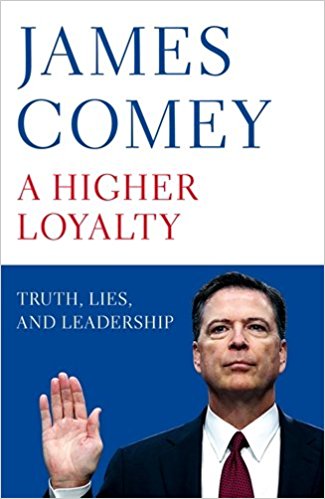 Unlike Wolff, Comey is seen as a political insider whose career is highly regarded on both sides of the aisle—a strange case of a difficult set of decisions made during the 2016 presidential campaign that left both ends of the political spectrum furious. While his choices to publicly address—and then revisit—investigations into Hillary Clinton’s handling of State Department email during the elections may satisfy no one, Comey’s position is that he was functioning at every point to try to make the most ethically sound choices possible.

One of the most even-handed assessments of the crux of the dilemma has come from Republican Mike Rogers, a former House Intelligence Committee Chairman, who has said that the “unconscionable” way Comey was fired by Trump seems to have been so hard on the former FBI chief that he has crossed into a realm that’s normally far off-limits to law enforcement, in assessing Trump as morally unfit for the office. Agree or disagree with Comey’s assessment, this isn’t the normal purview FBI consideration.

“It gives legs to everybody,” Rogers said to CNN’s Alisyn Camerota on the eve of the book’s release, “who now wants to condemn the FBI as a political organization, or an organization that decided it was going to investigate the president because they didn’t like him or didn’t like his morals. None of that is what the FBI is or where it should be.”

And so the book arrives with a kind of dark stature at a time when the United States’ interlocking institutions of national governance and law enforcement are being severely strained by a presidency that works daily to derail them.

Because the author is a ranking, longtime Washington heavyweight, the FBI’s chief from 2013 to 2017–who learned of his firing by Trump, you’ll recall, only when he saw the news on television while visiting FBI agents in California–the new book rises above the tabloid tone of the Wolff book. Comey was fired, by Trump’s admission, after all, because of the Russian investigation now vested in the Mueller special counsel.

Wolff’s work, however big a seller in January, read like a society columnist’s examination of the White House and has been criticized for shortcomings in fact-checking edits. Comey’s book, by contrast, has a dignified cover design in the States, far from the snarling-Trump cover of the Wolff book. In the UK, the cover design doesn’t gather the same gravitas as the American cover, but of course British readers can be forgiven for needing a photo of Comey to remember which of the many Trump saga players he is.

Under any cover, Comey’s is an “issue book” that will play out in the marketplace with much interest.

And as the release approaches, the most sensitive revelation  so far is that Comey concedes in the book that his interpretation of the likelihood of a Clinton win of the 2016 election influenced his decisions. Depending on who you’re talking with, this shows either wrongful bias or prudent pragmatism. But as The New York Times‘ Maggie Haberman—among the most astute reporters on the Trump psyche—pointed out on ABC News’ This Week with George Stephanopolous on Sunday, the White House may actually be relieved that the Comey book has no more revelations than it does. 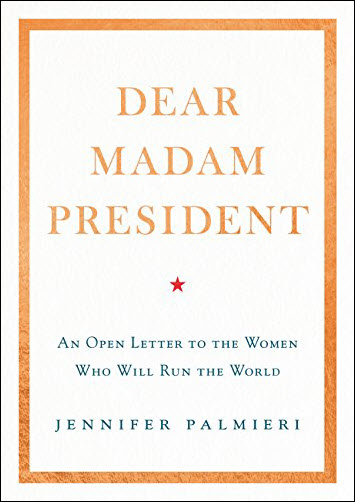 Such reasoning says that so acute is the jeopardy faced by the administration at this point with the Mueller special counsel investigation and the separate, rising firestorm around Trump’s “fixer,” the attorney Michael Cohen, that Comey’s book is, in a sense, “baked in” to the readership’s consciousness, and less a bolt from the blue than the Wolff book was.

What might that mean to sales? Time and the market will tell, as booksellers roll out A Higher Loyalty for consumers.

And maybe for publishing people, the most poignant viewpoint so far has come from Jennifer Palmieri, who was communications director for Hillary Clinton.

Palmieri’s book Dear Madam President has been out since March 27 from Hachette’s Grand Central Publishing, and has done extremely well, but can be expected to be impacted, of course, by the arrival today of the Comey book. Palmieri was working on the Clinton campaign as Comey’s announcements about the candidate’s handling of her emails roiled the news, twice.

And the author Palmieri’s comment about the author Comey’s new book? “I’m grateful I got my week,” she told CNN’s Stelter, “before he [Comey] comes in to crush my dreams. Again.”

More from Publishing Perspectives on Michael Wolff’s ‘Fire and Fury’ is here.