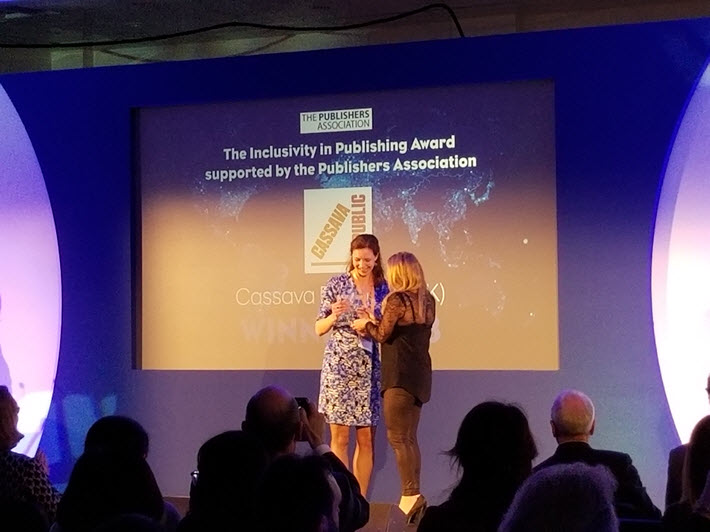 Cassava Republic, the Nigerian publishing house founded by Bibi Bakare-Yusef, was named winner of the Inclusivity in Publishing Award, and US-based Sara Miller McCune was on-hand to accept her Lifetime Achievement Award.

At a ceremony and reception on Tuesday evening (April 10) at the Olympia London conference center, the London Book Fair has named 25 entities and people winners of its International Excellence Awards.

The fair produces its awards program annually in association with the Publishers Association, which earlier in the day at the trade show released its new set of 10 priorities for government, “to support the UK’s world-leading publishing industry after Brexit.” The awards program again this year was sponsored by Hytex.

In terms of national markets, India and the United States each drew two awards, while three awards went to Latvia—one of the Baltic trio of markets recognized together as this year’s London Book Fair Market Focus. Among awards available to the Baltics’ contenders, Zvaigzne ABC Publishers won the Education Publisher Award and Dienas Grāmata the Adult Trade Publisher Award.

The Inclusivity in Publishing Award for Nigeria’s Cassava Republic was accepted by Emma Shercliff of London, where the company has an office. Founder Bibi Bakare-Yusef has recently begun distributing titles in the American market, as well.

In an unusual outcome, two people were named to the Literary Agent of the Year prize, Deborah Harris from the Deborah Harris Agency of Israel and Gloria Gutierrez of Spain’s Balcells Agency.

Amid the growing excitement around audiobooks’ reassertion in the market, the fair this year created an Audiobook Publisher of the Year prize, and it was handed to Penguin Random House USA. “Crucial to Penguin Random House’s audio success,” judges wrote, “is finding the right voices, making accurate recordings and memorable performances. Perhaps realizing that those are the minimal standards expected of fully professional audiobook production from a house of the magnitude of PRH, the jurors added that what had driven their final decision was “professionalism, sheer quality, and [the] scale of Penguin Random House’s ambition.”

As announced earlier by Publishing Perspectives, the program’s Lifetime Achievement Award went to SAGE Publishing’s American founder, Sara Miller McCune. A detailed commentary by Dame Lynne Brindley about McCune mentioned her leadership in aligning with UN sustainability goals. “We hold you dear and congratulate you on this Lifetime Achievement Award,” Brindley said.

“SAGE has reinvented itself many times since I founded it in 1965 … [with digital transforming] our original journals business into a range of products that would never have existed in a traditional print world.”Sara Miller McCune

In her acceptance remarks, McCune spoke of how “half of our senior management around the world is women.” And she committed to performing a gender pay gap report for her California-based corporation, in alignment with the mandatory reports now required in the UK of companies with 250 or more employees.

“It’s often appropriate to avoid silos,” McCune said, “because some of the best things come from interdisciplinary good things” come from the cross-influence of a unified company structure and content development.

“I also want to acknowledge back in the States the part of our group that’s nonprofit, the Social Justice Foundation,” which was founded a year ago. McCune has created her foundation “to translate information to a more general audience in North America,” built on what she calls her four justices: economic, educational, environmental, and social.

“SAGE has reinvented itself many times since I founded it in 1965,” she said, “long before most of you were born … [with digital transforming] our original journals business into a range of products that would never have existed in a traditional print world.”

Below is a full listing of this year’s winners. 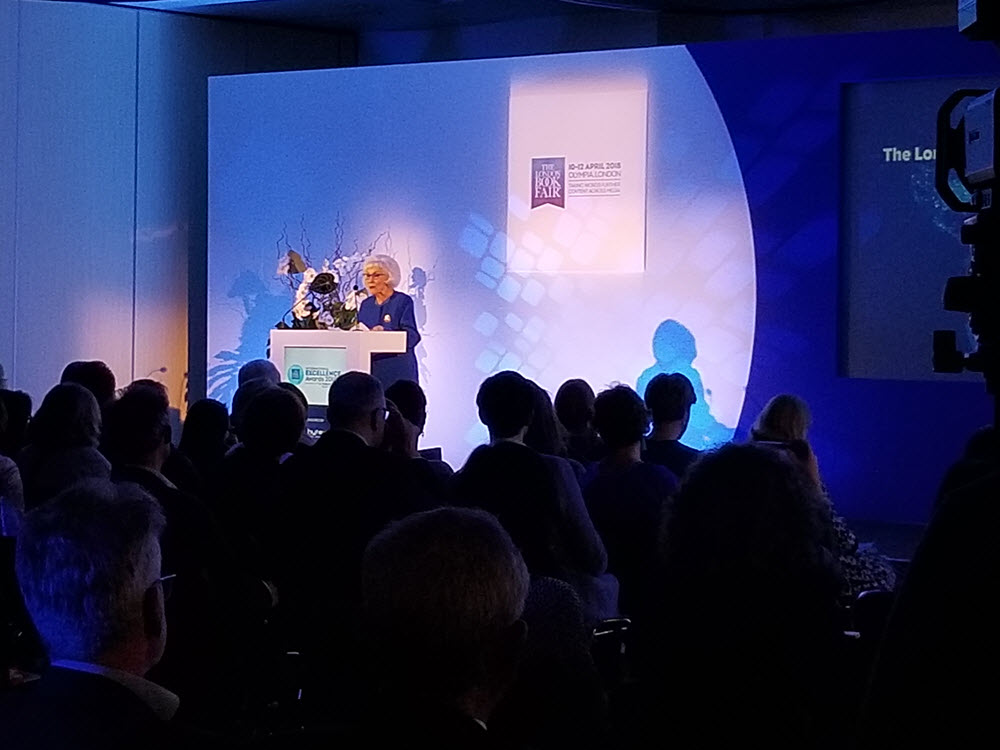 Library of the Year Award
National Library of Latvia (Latvia)

Awards eligible for entries from Market Focus Baltics only:

Awards eligible for entries from all countries, including the UK:

Awards eligible for entries from the UK only:

An award eligible for entries from China only:

More from Publishing Perspectives on London Book Fair is here.