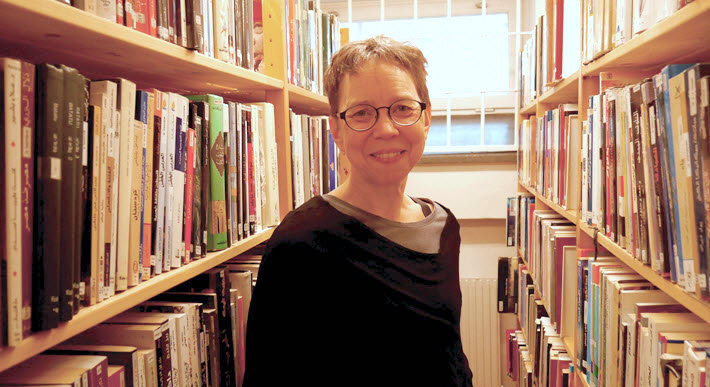 Sweden’s laws require libraries to serve citizens in their native languages, a project supported by a donation of thousands of Arabic books from Sharjah’s Kalimat Foundation. 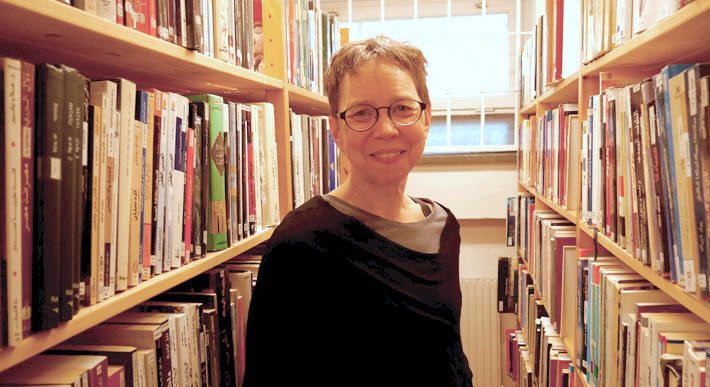 Elisabet Risberg, librarian with the International Library of Sweden.

‘I Learned a Lot From This Program’

The foundation’s creator, Sheikha Bodour bint Sultan Al Qasimi, had learned that Arabic is the second or third most-spoken language in Sweden today because of the diaspora of Arabic speakers to the Scandinavian nation.

The Arabic-language books from Sharjah,” she told us at the time, “are to be distributed to 25 libraries in various parts of Sweden.”

With the distribution of that donation now complete, Publishing Perspectives has been in touch with Elisabet Risberg, who leads the Internationella biblioteket, the International Library of Stockholm, to find out how the outreach from Sharjah to Sweden’s Arabic-speaking children has gone.

The International Library in central Stockholm feeds the national network of libraries with multilingual content, and its website can be read in Swedish, in Arabic, in English, in French, Chinese, Persian, Russian and Spanish.

All told, the international library is working in more than 100 languages and it can dispatch content in a requested language to the entire library system in Sweden.

We began by asking Risberg about the concept of the Kalimat provision of Arabic books for children in Sweden.

‘It’s Interesting How I Reacted’

“We have around 6,000 titles in Arabic for adults and 2,000 for children and young readers. And everyone can use this collection, in Stockholm or through the local library in other parts of the country.”Elisabet Risberg

Elisabet Risberg: When I first heard about the donation, I was confused. Why should we in a rich country accept donations of  Arabic children’s books? Public libraries here [in Sweden] have budgets for multilingual collections. At this point I didn’t know from where the books came or why we had this offer, so honestly I was a bit worried.

When I found out that the books came from Kalimat Foundation and that it was a gift to Arabic speaking children in Swedish libraries, I felt more at ease and very happy about being part of it.

I’ve followed Kalimat publications since 2008, and know the impact the publishing house has had for the development of children’s literature in the Arab region. But it’s interesting how I reacted to the word donation and how I changed when I looked upon it as a gift.

I can assure you that I learned a lot from this program.

Publishing Perspectives: Can you give us a sense for the Arabic presence in Sweden? We understand that Sweden has one of the largest concentrations of Arabic speakers outside of the Middle East.

“We sent out messages about the Kalimat gift” from the International Library in Stockholm. “The result was amazing. A few months later, we’ve distributed the books to 75 libraries, from south to north, and the response has been overwhelming.”Elisabet Risberg

ER: Arabic is our third-biggest language in Sweden, maybe even our second-biggest as it might have passed Finnish by now.

You notice the presence in many ways. It’s a language you hear every day if you travel by public transportation in Stockholm. You also notice because there’s much information in Arabic, for example on official websites, printed materials in libraries, hospitals, at the bank, at the dentist and you see companies advertising in Arabic as well as Swedish.

There’re also more restaurants with Middle Eastern cuisine—and not to forget how much easier it is for me to find Arabic coffee today than it was just a few years ago.

PP: How are things for adult readers of Arabic in Sweden? Do libraries have enough reading material in Arabic for the young readers’ parents, as well?

ER: The Arabic speaking community in Sweden is so big today and also spread all over the country, so most libraries include Arabic material, also for adults. Libraries are generally restricted to a contracted supplier and that’s sometimes a problem as it’s far from sure that this distributor can supply literature in all languages, or books that are asked for.

One of the International Library’s tasks is to support libraries with multilingual collections when they can’t meet the demand themselves, but also with literature that’s more difficult to acquire. The public libraries can borrow deposits from our collection in Stockholm and keep them for three to six months, send them back and borrow new books.

We have around 6,000 titles in Arabic for adults and 2,000 for children and young readers. And everyone can use this collection, in Stockholm or through the local library in other parts of the country.

PP: How is the Swedish program structured? We assume that most of the Kalimat books have come through you in Stockholm to be distributed to other libraries around the country? 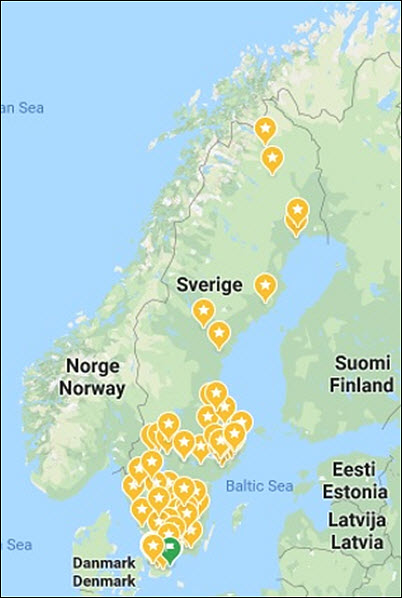 ER: Yes, as we already had the distribution channels, so it was easy for us to also distribute the Kalimat books.

We sent out messages about the Kalimat gift. The result was amazing. A few months later, we’ve distributed the books to 75 libraries, from south to north, and the response has been overwhelming.”

The librarians where so pleased and so thankful. Many of them had the books on display for a while. Even Swedish radio mentioned the donation and did a short interview with me.

But of course I also had a couple of emails from random persons asking if these books could be part of Muslim propaganda.

I just answered politely and invited them to the library to have a look at the books and I would gladly tell them more about each one of the titles. They never came back to me.

PP: Is there a way to know how many library users are looking for work in Arabic at the library system?

ER: From what I can see, we lent 6,448 books in Arabic during 2017, and that includes loans in Stockholm, titles lent to other libraries in the country, and also interlibrary loans.

It could be much more, but I think many of the Arabic-speaking users don’t know that the International Library exists or don’t know how they can use our collection. They visit their local libraries and borrow what they can find there but won’t ask the staff about other titles or more books.

We definitely need to be better in promoting our work.

There’s an Arabic Book Fair in Malmo and we’ll be there to present our work, and hopefully that will highlight our Arabic collection and people will know more about how they can borrow books from us.

PP: Many in the world see Sweden as being so welcoming to people of other languages, faiths, and parts of the world. The responsiveness of the library system is important to that context, isn’t it?

“I had a couple of emails from random persons asking if these books could be part of Muslim propaganda. I just answered politely and invited them to the library to have a look at the books … They never came back to me.”Elisabet Risberg

ER: Libraries are definitely important not only because of their collections but also in different programs for integration, as well.

But what I think is unique for Sweden is the way we talk about the importance of caring for your mother tongue. We believe that a strong mother tongue will help a person to learn other languages.

Our library law is also clear in that we should pay particular attention to people with a mother tongue other than Swedish by offering literature according to their needs. This is what the International Library works for, every day, not only in acquiring literature in more than 100 langages, but also in supporting other libraries in the country in their work with multilingual collections. 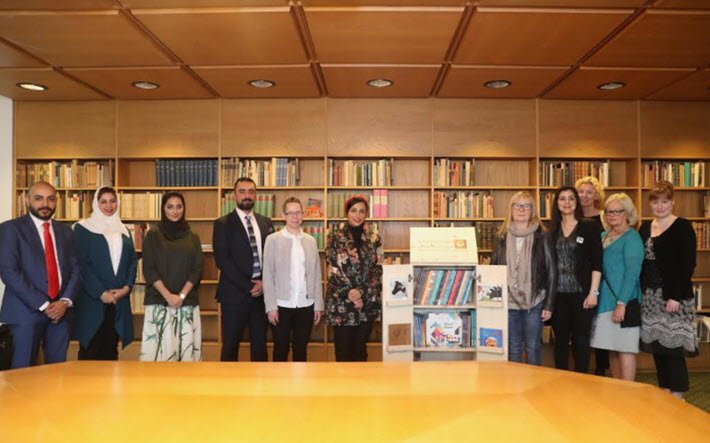 “For Kalimat Foundation, the provision of children’s books in Arabic also gives the big numbers of displaced families and refugees a window into their own culture and some recognition of their heritage which they need.”Bodour Al Qasimi

Publishing Perspectives asked Sharjah’s Bodour for a comment, now that the distribution of the Kalimat Foundation books is complete.

She says, “Supporting the Stockholm International Library initiative with 2,000 Arabic books emphasizes Kalimat Foundation’s commitment to providing children across the world with access to reading in their own languages. With Arabic having overtaken Finnish as the second most-spoken language in Sweden, this was the ideal opportunity to act.

“For centuries we’ve known that the influence of books on young people can dramatically affect their perceptions of themselves and their surroundings, making literature essential to providing values of understanding, tolerance, and cross-cultural harmony. In every society and community, there’s a responsibility to raise a generation of readers and foster a love of the written word as a source of knowledge and a cradle of imagination.

“For Kalimat Foundation, the provision of children’s books in Arabic also gives the big numbers of displaced families and refugees a window into their own culture and some recognition of their heritage which they need.”

More from Publishing Perspectives on Arabic literature is here. And more on children’s books is here.