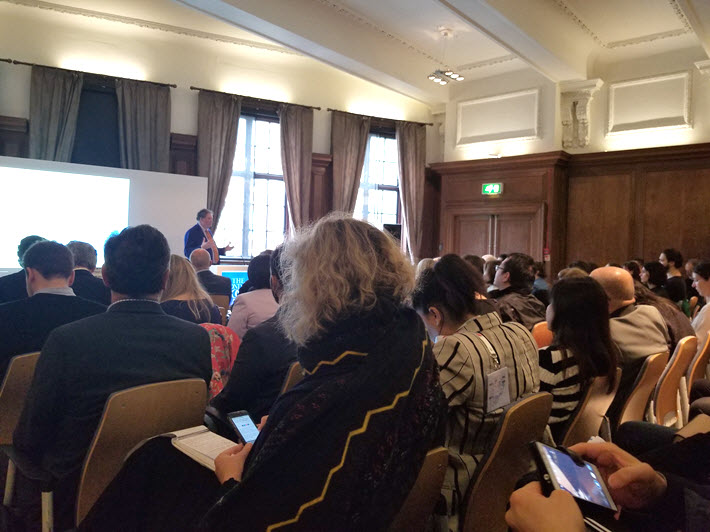 The London Book Fair this year presented a mini-conference on the freedom to publish with the International Publishers Association and featuring the widow of slain publisher Faisal Arefin Dipan. 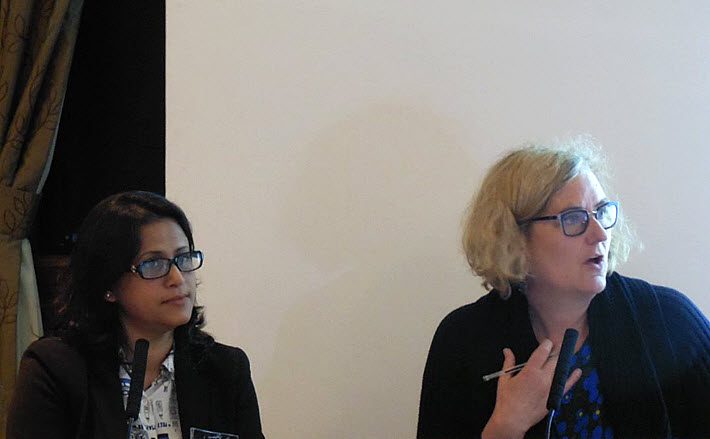 Why “freedom to publish”? And why now? The London Book Fair‘s first special mini-conference on the subject, set on the opening day of the fair, devoted two-and-a-half hours to the topic of publishing under mounting political pressure, in association with the International Publishers Association (IPA).

The program was called “Censor, Advocate or Disruptor? The Role of Publishers in an Evolving Publishing and Media Landscape,” and it brought together an impressive group of speakers, although the planned appearance of 2018 Prix Voltaire winner Gui Minhai‘s London-based daughter Angela was unfortunately derailed because Angela Gui was ill. Gui is the Swedish publisher detained by Chinese authorities, as Publishing Perspectives reported.

“The business of publishing is a serious one,” she said. “Books entertain, they inform, and they inspire. But their starting point is to educate. With education, the world opens up. Books give us insight and windows into other cultures, other points of view.

“Surely, by opening ourselves up to such experiences, the world should become smaller, the differences narrower, and intercultural understanding greater.”

When the IPA’s president, Elsevier’s Michiel Kolman spoke, he thanked London Book Fair director Jacks Thomas for a very fast programming effort, resulting in this special seminar. As it turns out, the idea for the event came together at the IPA’s International Publisher Congress in New Delhi, at which Thomas spoke. That have happened in mid-February, the London Book Fair staff went to the mat to make this special program come together so quickly.

And Kolman would echo Thomas, speaking of “the weight of responsibility borne by publishers for centuries” in resisting authoritarian overreach.

“A publisher who believes in the work will support it against oppression,” Kolman said, “but they will need the legal framework in place.” As an example, he pointed to the effort earlier this year by Donald Trump’s attorneys to issue a cease-and-desist order against the Big Five publisher Macmillan (also the publisher this month of James Comey’s A Higher Loyalty) when it was about to release Michael Wolff’s Fire and Fury.

“Publishing,” Kolman said, despite the dire actions in censorship by some governments, “should not be a matter of life and death.” 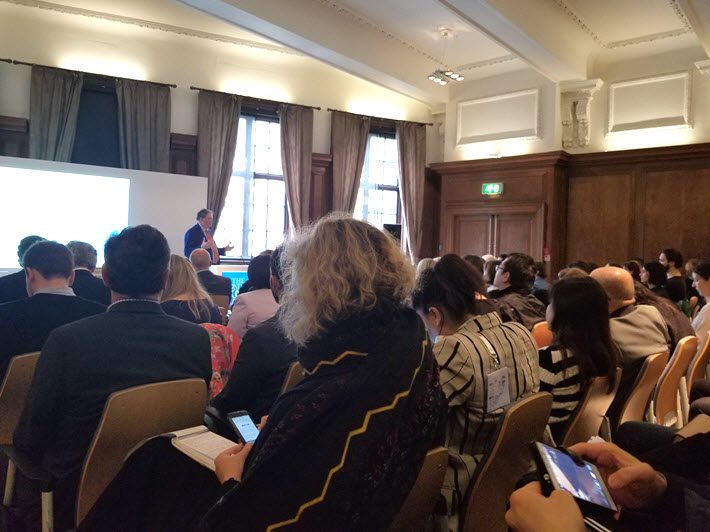 At the session ‘Censor, Advocate or Disruptor? The Role of Publishers in an Evolving Publishing and Media Landscape’ at London Book Fair. Image: Porter Anderson

While the seminar would soon hear from Razia Rahman Jolly, for whom publishing is life-and-death, Mark Stevens, a specialist on international expression and constraints on it, was on hand to first provide a quick overview of the legal context for the freedom to publish, pointing out, “There is no law which prevents us thinking any thought. Where the law comes in is expression. It’s about stopping us expressing our ideas” and the thoughts that underlie them.

He referred to ancient times when the church or other authoritative body would have a person branded with SL for seditious libeler, for engaging in unapproved expression. How censorships works today, he said, involves the law, the geography—as in where an action against freedom to publish may occur—and the specific area’s interests in terms of what’s published.

“A nest of trip wires” is Stevens’ term of choice for the way many modern societies structure their efforts to control speech. He mentioned, for example, with Thailand’s “insult laws” that be invoked against the media if photo of a special person is considered too revealing of that person’s life or security issues.

“Some of the new leadership in Africa,” too, Stevens said, “seem to have recognized the importance of censorship and oppression.” Such supposed offenses as “harming the reputation of the state” can be trumped up, for example, he said, as when The Wall Street Journal was challenged for having reported financial difficulties in South Africa. 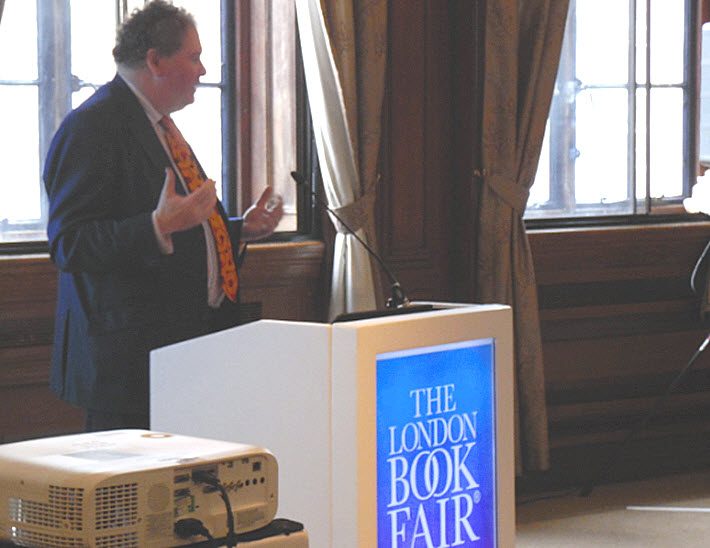 Stevens’ commentary would give way to two panel conversations. In one of them, PEN International president and author Jennifer Clement spoke with IPA’s freedom to publish committee chief Kristenn Einarsson, English PEN president, and London’s Azadeh Parsapour, whose Nogaam is a house launched in 2012 to digitally publish Farsi writings that are censored in Iran.

Freeley talked of the ongoing oppression in Turkey following the 2016 failed coup attempt against the Erdoğan administration. It’s there that the most flagrant violations of expressive and publishing freedom have been exercised.

“We had 116,250 people dismissed from public service,” she said, “their passports revoked and they can’t find employment anywhere in and around Turkey.” In addition, there were 5,822 academics from 118 public universities.” And then 2,500 workers from private aid organizations also are out of work, she said.

A total 140 media organizations are said to have been closed, and 30 publishing houses were shut down, as were 18 publications. Of the writers who are imprisoned, she said, the overwhelming majority are jailed because of alleged membership in organizations that the government deems “terrorist,” still the preferred rationale for the regime’s oppression.

You can the complete report, “Turkey: Freedom of Expression in Jeopardy,” at the English PEN website in PDF here.

Some of the most astute comments about the IPA’s now-annual Prix Voltaire program came from Claire Amitstead, associate editor in culture for The Guardian.

For example, she pointed out that those of us who live in “privileged places”—where, as Kolman had mentioned, existing legal frameworks can be counted on to at least support the kind of resistance that Macmillan’s John Sargent could use to stare down Donald Trump—may not readily notice that the Prix Voltaire is helping us each year to understand the many kinds of oppression  may be levied in various parts of the world.

“It struck me,” she said, “that there are lots and lots of different forms of threat around the world. For example, there are places where theocracy stifles you … it’s so interesting to have a prize like this that gathers so many different sorts of threats to free speech.”

In other words, the process handled by Einarsson at the IPA and his committee members each year to produce the prize is an educational one for all of us. A look at the shortlisted candidates for this year’s award alone, for example, takes you from Parsapour’s work in translating work disallowed by Tehran into Farsi to newspaper editor Lewis Medjo in Cameroon, who with his family suffers harassment from the government.

‘We Are Totally Murdering People’ 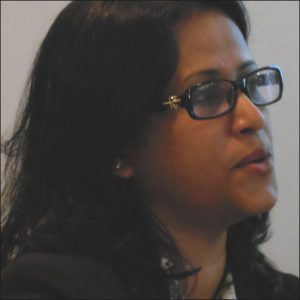 Easily the most compelling, disturbing, and courageous comments came from Razia Rahman Jolly, who has found the fortitude to continue the work of her Bangladeshi publisher-husband Faisal Arefin Dipan, who was hacked to death at his office, allegedly by religious extremists, in October 2015.

Rahman Jolly is a soft-spoken women of self-effacing strength. The pain from which she speaks about carrying on the publishing work of her slain husband makes it evident that there are levels of despair and dark duty here the rest of us can only guess at.

“Yes, we are upset,” she said. “But what society will do for me, I don’t care. I am running the publishing company now.

“I don’t feel secure. I’m not protected,” she said in answer to a question from Amitstead about whether she operates with any sort of bodyguard presence.

“I found him lying down” at his office, she told us in halting, excruciating memories, “in blood. We took him to the hospital, but he was murdered.

More from Publishing Perspectives on the freedom to publish is here. More of our coverage of the International Publishers Association is here. And more on London Book Fair is here.