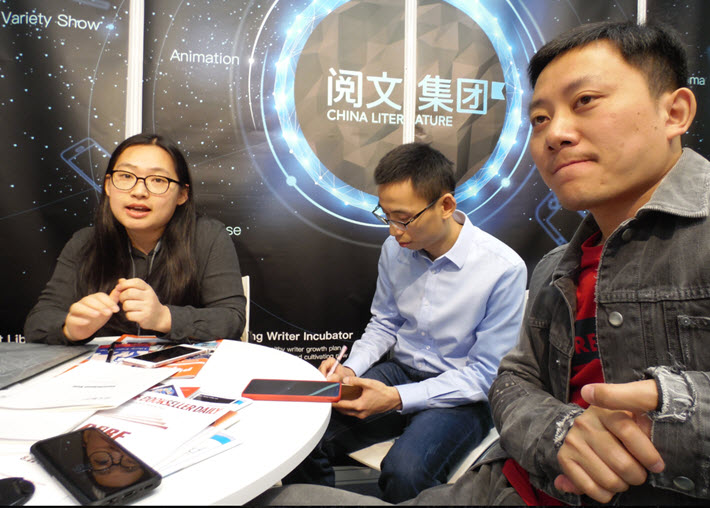 With massive numbers of literary works, readers, and writers behind China Literature and its online Qidian operation, the company is focusing more on foreign rights sales in books, film, and television. 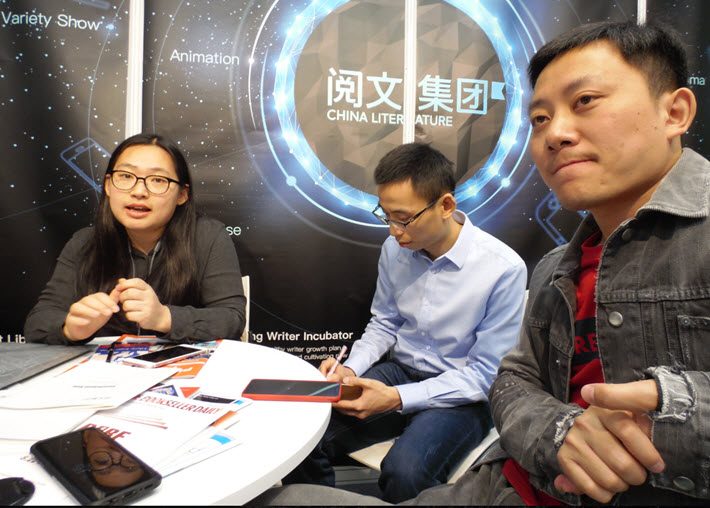 Like the very tip of an iceberg, 20 or so slim, plain-covered English-language samples of books lie on the shelves at the China Literature stand. What you’re not seeing is the roughly 10 million works ready to take their places as soon as a publisher buys the rights to these.

Aaron Huang, China Literature‘s international licensing director, and Sandra Chen, senior manager with the online service Qidian, are avid reps for such works as The King’s Avatar by an author known as Butterfly Blue. That one has been adapted into an animated film series that drew 8.19 ratings (out of 10) on MyAnimeList, a leading online anime and manga community website.

Another title, Fighter of the Destiny, is a 2014 title that also went to television as a series. There’s a film adaptation of that one to come, as well, something encouraged by the 500 million views recorded for its series, a record-breaker for the company’s paid subscription program.

Fantasy, science-fiction, and romance are the leading genres they sell in China and on Qidian’s English-language site, WebNovel.com, with “city life” close behind, a genre specific to Chinese urban readership.

And so far, the team says, French publishers have bought some 25 titles for translation, while Penguin Random House in the UK has made at least three purchases.

China Literature is a combination both of traditional publishing for paperback editions and “online writing,” as the company’s massive Internet platform is called in China. About 1 percent of China Literature’s online books are released in print. As modest as that sounds, that small percentage totals 100,000 print books.

What’s more, while we’re accustomed in the West to marveling at the 65 million active users monthly engaging with the Toronto-based platform Wattpad, China Literature’s online draw was seen to be 191 million by the end of last December. Not unlike Wattpad, which sees 90 percent of its users accessing the service on mobile devices, around 179.4 million of China Literature’s consumers are doing the same.

When consumers go to the online platform for stories, they’re normally looking at series. They pay for these works by the chapter at rates that come out to around a penny for 100 words or so.

So big is the company’s archive of content that by 2017, it was reported to have more than half of all original works in the vast Chinese online literature market. Beyond its own 10 million works, the company has some 280,000 titles from third-party sources, and 140,000 ebooks.

Many of the print books produced by China Literature have been sold into Southeast Asian markets such as Thailand. The 15-year-old company is half-owned by the sprawling Tencent corporation.

Some notable facts about the content holdings of China Literature—as of 2016, the company owned:

All is not online for this company, either. In nonfiction, particularly, Chen says, readers like to own print copies of their favorite works.
And, like the administration of Wattpad Studios, which just announced its own push into Asia for screen adaptations, the China Literature group, Huang says, has learned to hold onto its film and TV rights and license productions of the works for the screen.
“About 60 percent of our audience is 24 or younger,” Chen says, which accounts for the heavy interest in romance, called “modern love,” in China.
“And yet for us,” she says, “about 65 percent of our audience is male,” as compared to female readership majority for Wattpad’s work—hence the high levels of action-adventure fantasy in China Literature’s popular titles.
The company will be at the New York Rights Fair in May, Huang says, and at Frankfurter Buchmesse in October. And next year at London Book Fair, they all agree, they’ll be looking for a better-placed stand. Their 2019 appearance in London will be the company’s third year at the London trade show, and the team feels it’s getting its legs now.
“We have almost 7 million writers on our online platform,” Chen says, and in 2016, the company paid nearly US$158 million to authors for their work, more than 100 of those writers’ income surpassing 10,000 Chinese yuan or $US1,589 per day, based on a single work.

More from Publishing Perspectives on China is here. And more on the London Book Fair is here.