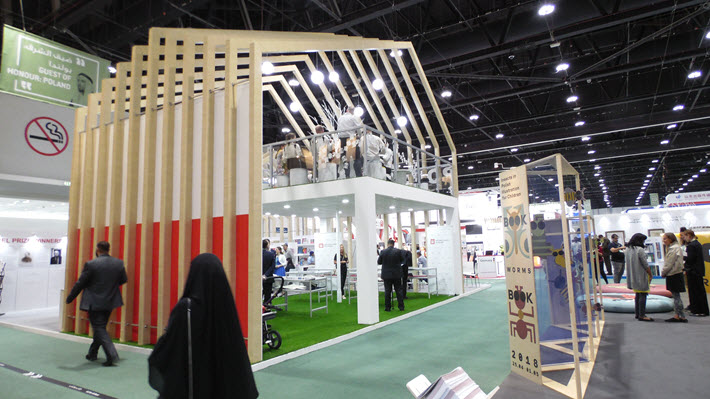 The spaciousness and energy at Abu Dhabi’s National Exhibition Center make the just opened book fair there a sprawling, energetic event with a professional program at its heart. 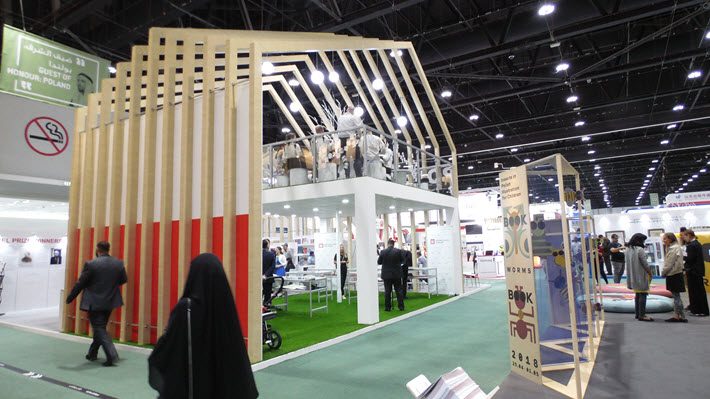 This year’s Guest of Honor, Poland, has a brilliantly lit stand at the entrance to Abu Dhabi International Book Fair, a Guest of Honor with musicians playing on its upper deck. Image: Porter Anderson

From the lines of young book fair-goers making their way excitedly around the exhibition floor to the towering two-story Books from Poland stand they encounter at the entrance, Abu Dhabi International Book Fair (ADIBF) has opened this week with spacious, colorful energy. Poland is the fair’s Guest of Honor country this year.

And like the Poland’s guest of honor programs at London Book Fair and BookExpo two years ago, the stand features apples in large wooden bins for passing fair-goers.

This year, at Abu Dhabi, it’s as if the Poles have created a treehouse in the orchard, and on Wednesday (April 25), as royal-family dignitaries entered the exhibition floor on red carpets, an eight-piece musical ensemble was at work in that treehouse, producing some very knees-up music that at times had the tart tonalities of a kletzmer band. At least 13 authors are in Abu Dhabi with the Polish program.

The busyness of that music sounded right for the week’s events. Today (April 26), for example, a translation conference is being opened by the Sheikh Mohamed Khalifa Al Mubarak with additional comments from Sara Al Amiri, the UAE’s Minister of State for Advanced Sciences.

A Canon exhibition gleams nearby in a low-walled enclosure filled with demonstrations in printing advances. On Saturday (April 28), Canon will host a special “Future of the Book Forum” starting at 10 a.m. 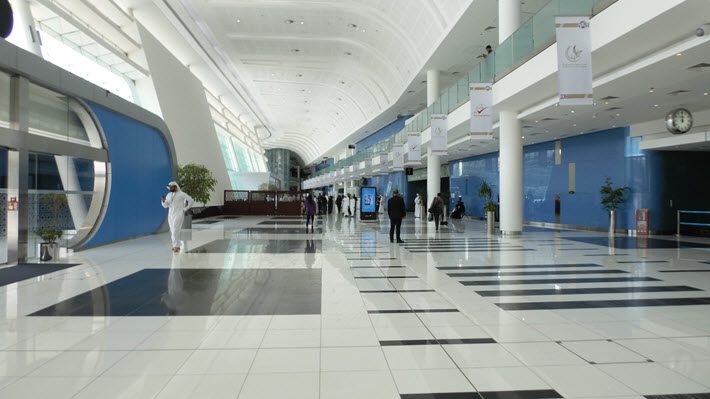 A Public Fair With a Professinal Program

The Abu Dhabi International Book Fair is a public-facing event for readers and book-buyers, as well as a show for publishing industry professionals. This year, the program has introduced a kind of bespoke credit card system that students and others can use to spend their subsidized vouchers on book purchases. Like many other consumer book fairs in the world, this fair provides an annual sales boost to regional publishers.

And for the industry, Nabeel Khalfan Al Mehairibi, program manager for ADIBF, and Mohamed Abdulla Alshehhi, Director of Research and Participation for the Abu Dhabi Tourism & Culture Authority, have this year created a professional program with 45 speakers from many parts of the word, the emphasis is on the publishing infrastructure of the Arab world, its strengths and its challenges.

Set in a windowed enclosure in the center of the fair, the Business Club at ADIBF is place for networking and learning, and the program of more than 40 events running through Monday (April 30) moves at times to the fair’s E-Zone Venue, as well.

A quick look at some of the professional program offerings includes:

Ultimately, the goal is to expose the Arabic publishing world to the rest of the global industry and the worldwide industry to the potentials of Arabic publishing. While such issues as foreign rights sales can be of material value—literary agents are rare in the Middle East—personal networking, of course, plays a major role.

And by the end of the first day’s sessions on Wednesday, some of the veterans working with the program were reporting strong interest and good crowds for the sessions. 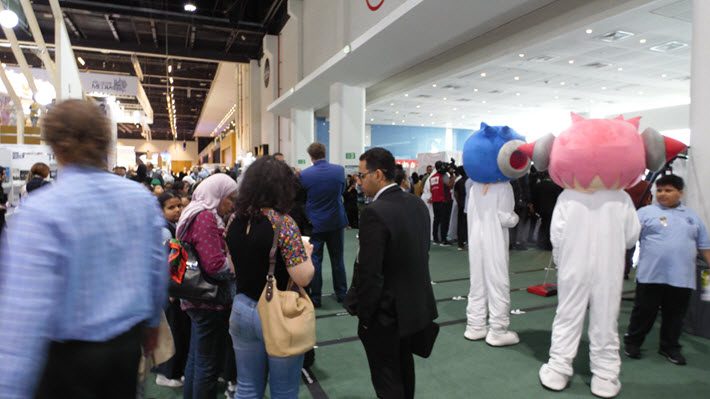 Students are a major target of the Abu Dhabi International Book Fair and they’re greated by friendly mascots when they arrive. Image: Porter Anderson

More from Publishing Perspectives on Abu Dhabi International Book Fair is here. And more of our coverage from the United Arab Emirates is here.