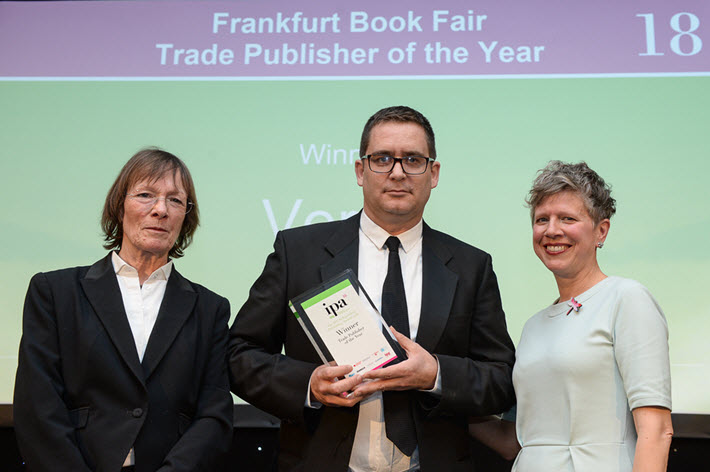 Honored for ‘finding a receptive audience for its left-wing list in 2017,’  the UK-US publisher Verso has been named the Frankfurter Buchmesse Trade Publisher of the Year at the IPG Independent Publishing Awards.

‘Paying Off in Sales’

Praised for a level of direct sales called “phenomenal,” the UK’s Verso has been handed the Frankfurter Buchmesse Trade Publisher of the Year award at the UK’s 2018 IPG Independent Publishing Awards on Thursday evening (March 8).

On the day of the awards, Verso staff was on strike for International Women’s Day to show solidarity with women and non-binary people for “the myriad oppressions and discrimination” they face in the workplace. The company is donating 10 percent of its February sales to the strike fund.

Verso faced stiff competition on the award’s shortlist, fending off Hurst Publishers, Zed Books, and the mighty Bloomsbury Publishing to draw its first IPG award for what prize organizers described as “finding a receptive audience for its left-wing list in 2017.” In writing up the award, the IPG’s material for the media reads: “Verso’s creative marketing, led by social media and author events, has triggered substantial sales through its own relaunched website as well as in shops.

“‘Verso has really reached out to the trade lately, and it’s paying off in sales,’ judges said. ‘There was some very significant publishing last year and the level of direct sales is phenomenal.'”

Established in the late 1970s as paperback imprint of New Left Books, Verso takes its name from the left-hand page of a book and in the 1990s opened its office in New York City, and today the company has editors in Brooklyn and Paris as well as London. It describes itself as “the largest independent, radical publishing house in the English-speaking world, publishing one hundred books a year.” 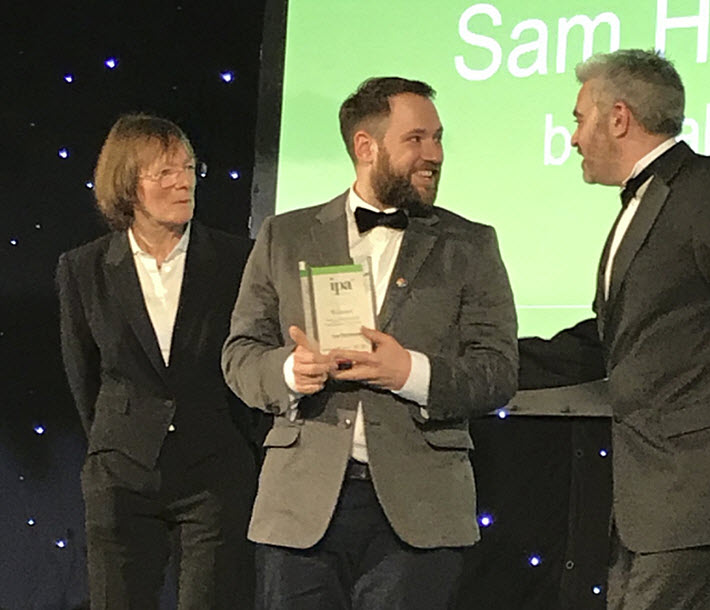 Sam Hutchinson of b small publishing is named IPG’s Young Independent Publisher of the Year. Image: tweeted by @bsmallbear

A Field of 42 Nominations, 26 Companies

Verso’s honor was one of 12 awards for publishers—in addition to two given to industry players—announced at the annual awards dinner, part of the annual spring conference of the IPG at Chipping Norton.

The frequently honored children’s publisher Nosy Crow was given the Bookseller International Achievement Award for the third time in six years.

Another How2Become the Nielsen Digital Marketing Award for the third year in a row. For the first time, there was a tie in one category: Bloomsbury Publishing and Class Publishing were named joint winners of the IPG Digital Publishing Award.

All told, the successful companies were chosen from shortlists featuring 42 nominations from 26 different companies, two other publishing organizations and five individuals.

In a prepared statement, IPG chief Bridget Shine is quoted, saying, “From the biggest and best field of entries in the history of the awards, these winners represent the very best of the independent publishing sector. We congratulate all of them, as well as all those who were shortlisted.

“The intense competition for the 2018 Independent Publishing Awards is proof if it were needed of the incredible range of diversity and dynamism within the IPG’s membership.” 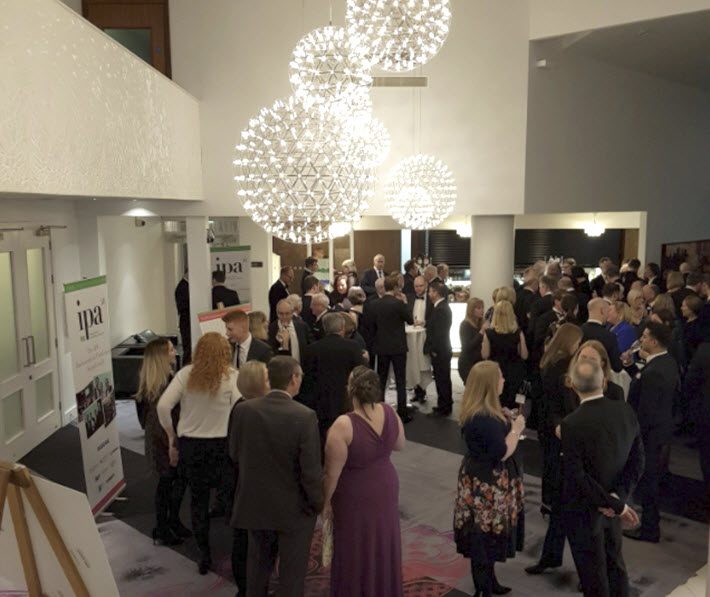 At the IPG Independent Publishing Awards in Chipping Norton. Image: Tweeted by @EmeraldGlobal

More from Publishing Perspectives on IPG is here.