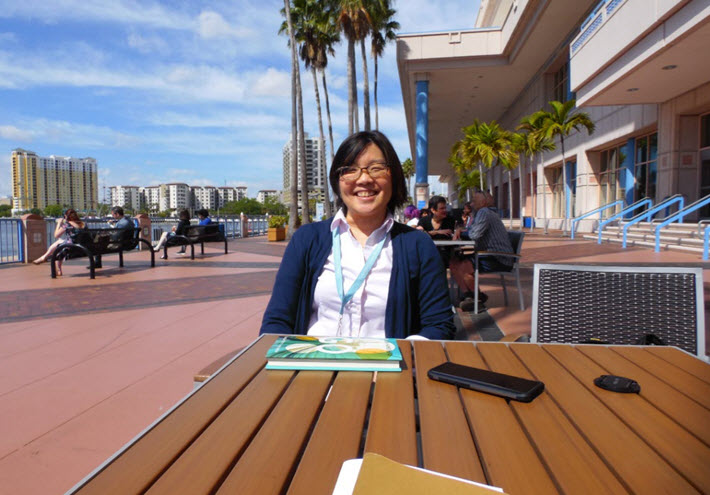 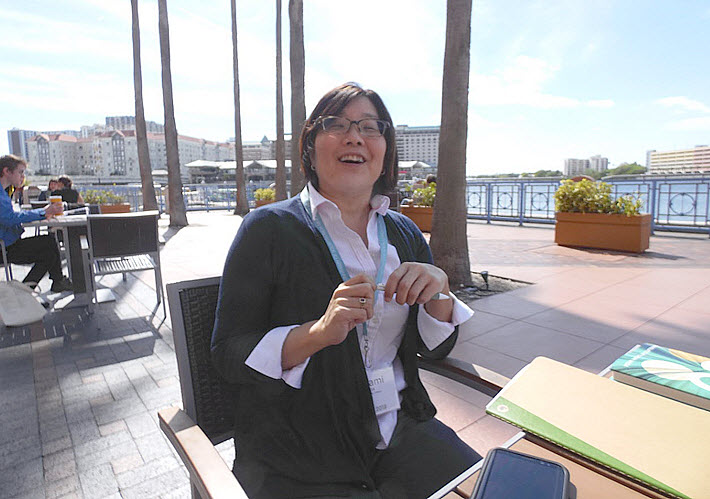 ‘There’s Always Something You Can Do’

The happy gaze she casts on a sunny terrace outside the Tampa Bay Convention Center needs no translation. “Better than Seattle,” translator Takami Nieda says with the cryptic clarity of the teenager she’s brought to life in English this month.

Her translation of Kazuki Kaneshiro’s Japanese-language novel Go and its articulate, brat-boy protagonist Sugihara was published on March 1 by AmazonCrossing, the powerhouse translation imprint of Amazon Publishing. A bestseller in Amazon’s Kindle Store, the book now is collecting thoughtful write-ups and reviews from sometimes surprised consumers—many of whom are putting their fingers on the importance of translation: 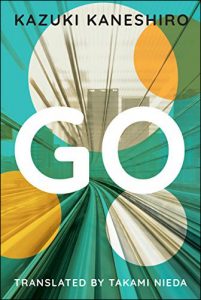 “It’s definitely his voice,” Nieda says about how she’s captured the idiosyncrasies of a talkative character. An English department faculty member at Seattle Central College, she spoke to Publishing Perspectives at this week’s AWP, the Association of Writers and Writing Programs conference in Tampa. “I could translate in that voice all day because the words that come out of my mouth come out in that voice.”

This is a clue to why she spent seven years shepherding the book to its new English rendition. Nieda spotted the book and was captured by its canny, irreverent cadences. She got the author’s permission to translate it, created samples in English, and shopped it around for a publisher with a brand name the author would approve. That publisher turned out to be AmazonCrossing. 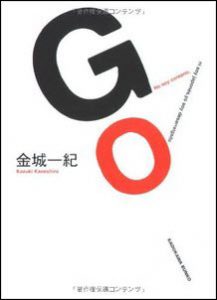 Kaneshiro’s original novel Go was published in Japanese in 2000 by Kodansha and won the Naoki Prize. A popular film adaptation from director Isao Yukisada was released in 2001 with Yôsuke Kubozuka as Sugihara.

The Japanese Academy gave the film an enviable suite of eight wins in 2002, including best director, actor, and supporting actress for Ko Shibasaki as Sugihara’s girlfriend, Sakurai. And while Kaneshiro has gravitated more toward film and television today, Nieda says, her attachment to the work was firmly in place.

“If I’m being honest,” Nieda says, “I can’t remember now whether I saw the film or read the novel first. But they’re both wonderful. And the first thing I thought was, ‘I wish I’d read this novel when I was growing up.’ It’s the voice I wish I’d heard.

“I’m Japanese-American,” she says, “and I grew up in a very non-Japanese environment in New Jersey. I had all these swirling questions about identity, about not belonging—I didn’t know what my identity was, just that it wasn’t white.”

Reading material that had come out of the dark World War II internment of Japanese citizens in the States, she says she found the tone in those works to be self-defeatist. “All about gritting your teeth because what else can you do?”

Nieda found herself resistant to such pessimism. “Why would they think there was nothing you could do?” she asks.

And Go is about an immigration of love. “There’s always something you can do. And when I read Go, I’d found a teen who’s always thinking, ‘Of course there’s something I can do.'”

Sugihara, the book’s soulful main character, is Zainichi—a Japanese resident of Korean origin, just like the book’s author, Kaneshiro. There’s a long, difficult history of Japan’s treatment of ethnic Korean citizens, and in a passage near the end of the book, Sugihara explodes with soaring frustration at the bullied life he’s lived, words and logic punching the reader like his father the boxer taking down an opponent:

“If you people want to call me Zainichi, go ahead! You Japanese are scared of me. Can’t feel safe unless you categorize and label it, right? But you’re wrong. You know what–I’m a lion. A lion who has no idea he’s a lion. It’s just a random name that you people gave him so you can feel like you know all about him. See what happens when you try to get closer, calling my name. I’ll pounce on your carotid artery and tear you to shreds. You understand? As long as you call me Zainichi, you’re always going to be my victim. I’m not Zainichi or South Korean or North Korean or Mongoloid. Quit forcing me into those narrow categories. I’m me! Wait, I don’t even want to be me anymore. I want to be free from having to be me. I’ll go anywhere to find whatever thing will let me forget who I am. And if that thing isn’t here, I’ll get out of this country, which is what you wanted anyway. You can’t do that, can you? No, you’ll all die, tied down by your ideas about country, land, titles, customs, tradition, and culture. Well, that’s too bad. I never had any of that stuff, so I’m free to go anywhere I please. Jealous? Stay jealous!”

American readers of that passage will know why so many consumer reviews are referencing the Trumpian crisis, the nationalistic rigidity gripping the States and other nations today. The key line in Nieda’s translation jumps right out: “As long as you call me Zainichi, you’re always going to be my victim.” The teen Sugihara has learned what many adults today need to say: the loser is the bigot, the racist, the authoritarian.

And in Kaneshiro’s story, young Sugihara may indeed lose the girl he met when he left the Korean education program and went to a Japanese school. When he confesses to her that he’s Zainichi, she has to decide whether she can cross the boundaries of discrimination that society has mapped out for her. 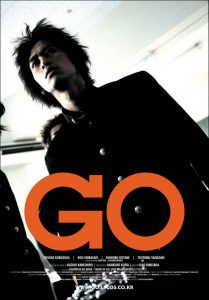 A poster for the 2001 film by Isao Yukisada

Once she’d gotten the OK—in a Twitter exchange with Kaneshiro—to create an English translation, Nieda found that winning grants to help cover the cost of making an English sample was good for publicizing the work. At PEN America, you can find an article she wrote about the piece in 2015, when the organization had given her a PEN/Helm Translation Fund grant for her work in English on the book.

“As the only Zainichi Korean—an ethnic Korean long-term permanent resident or citizen of Japan—in his Japanese high school,” Nieda wrote, “Sugihara has always had to defend himself against all kinds of bullies, and has a stellar 23‑0 fight record that would make his father, a former professional boxer, proud.”

That aspect of the book has prompted an interesting reaction to Go at Goodreads and in other reader-review settings, she says. “Some of them talk about it being ‘so violent,'” she says. Depictions of fist-fights and unarmed combat may be less common in a gun culture, she points out, than in a society like Japan in which gun violence is rare.

“It’s a pugilistic narrative,” she says, laughing about the eclectic battery of influences with which Sugihara pounds his friends.

At PEN, she had pointed out, “The way Sugihara searches for and draws strength from the teachings of Malcolm X, the lyrics of Springsteen, and Hendrix’s iconoclasm is deeply touching. He’s also a movie lover, often making references to The 400 Blows, The Age of Innocence, and Bruce Lee; he’s a student of rakugo, the ancient Japanese art of storytelling. Sugihara’s influences are as diverse and inclusive as the society he envisions for Japan.”

There’s another level of diversity and inclusivity reflected in Nieda’s work on the novel, too: she’s a female translator working with a restless masculinity created by a male author. In David Hackston’s translation of Katja Kettu’s The Midwife, we saw the opposite–a male translator interpreting a deeply female viewpoint and narrative. And in Antonia Lloyd-Jones’ translation of  Zygmunt Miłoszewski’s Rage, it’s a woman translating a staunchly male construct.

One of the things that can widen the popularity of this new English edition of Go, she agrees, is the boyish energy of the pacing cultural omnivore at its center. Sugihara’s darting commentary on his life is what makes the reader love him, and it’s what gets him into trouble. He can’t resist the takedowns of an agile young mind: “When I’m watching the Olympics,” he says, referring to Seoul’s 1988 summer games, “I can cheer on both Japanese and Korean athletes in their own language. Don’t you think that’s great?” 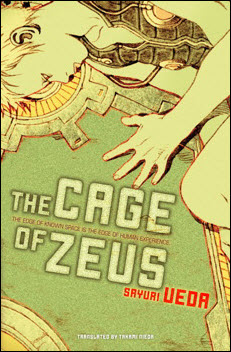 Nieda now is working on a new translation, she says, this one by a female Japanese author. She translates only Japanese-to-English, “and only in that direction,” she clarifies with a smile.

A graduate of Stanford (BA) and Georgetown (MA), Nieda is almost 20 years into her teaching career in writing and literature.

She gets most of her translation work done in the summer months outside of the school year, but she’s begun working on developing a translation class at Seattle Central. “Community college students are immigrants,” she says. “First-generation college students with a multilingual background”—minds, perhaps, open and ready to read the literature of “the other.”

As she says, one of her favorite lines from Kaneshiro’s book is one Sugihara’s father likes to get off: “You can buy citizenship to any country you want. Which country will it be?”

More from Publishing Perspectives on translation is here. And more on AmazonCrossing is here.