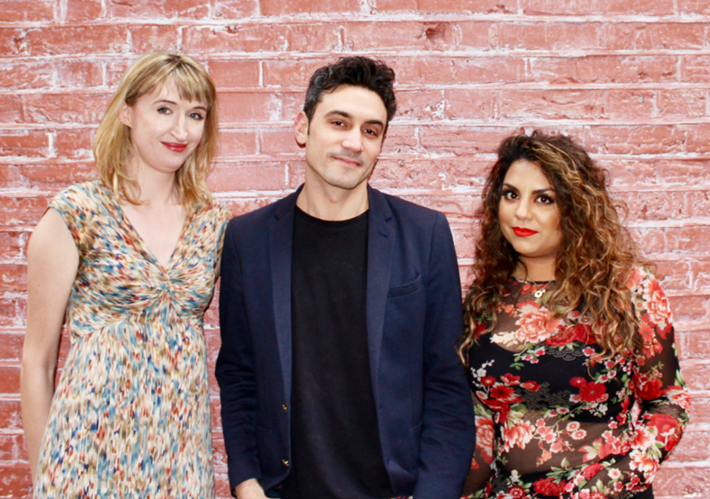 Colour PR’s founders have their hearts in book publicity and already are familiar to and with the UK industry. We talk with Daniel Freeman about this new agency.

Daniel Freeman: ‘A Range of Skills’

Daniel Freeman, Zekra Rahman, and Liz Mallett opened their new agency, Colour PR, on Monday (March 5), and say they expect to work with clients in publishing, entertainment, and leisure.

Freeman tells Publishing Perspectives that he and his associates have nothing but good things to say about their experiences on the senior team at Midas PR.

Midas, co-founded by Tony Mulliken and Steven Williams, had news of its own last week, with the announcement that Hodder’s Jason Bartholomew is joining as joint CEO. Now, in an unrelated move, it turns out that a trio many in publishing think of as Midas agents have struck out on their own.

The development of this new agency, Freeman says, has been in the works for a while. “We’d worked together for quite a long time,” he says, building experience and gaining contacts.

“Liz left Midas in October. I decided to pursue other options, although I could have stayed there forever,” he says, in terms of the quality of the work at Midas. “Zekra did the same.

“Having built up many years’ experience in the industry, we will continue to work with brands in the publishing sector as a collective.”Zekra Rahman

“We talked about each other’s skills. Liz was publicity director in-house, Zekra had worked as a journalist before Midas.” And Freeman’s publishing experience began in B2B, working, for example, in promotion of KPMG’s In Search of the Perfect Health System (Palgrave Macmillan) in international markets.

“I’m not sure there’s an agency with the same range of skills,” he says.

“We can work on corporate communications, copy-writing for leadership, entering the publishing market, award programs, initiatives, anything.”

That range of capabilities has led the team to plan to work with a host of clients, including, according to their media materials—”authors across every genre, book retailers and distributors, publishers, publishing technology enterprises, major book fairs and awards, and industry-wide campaigns.”

Having worked with a long list of substantial brands, the teammembers have, they say, developed a “holistic understanding” of the book trade and a strong instinct for important emerging trends. Those brands in their background include Audible; London Book Fair; the UK’s reading-and-sales promotional campaign Books Are My Bag; the Booksellers Association; ITV’s Crime Thriller Awards; and Bonnier Publishing UK.

Freeman has 13 years’ experience in the business, starting off in food and drink, he says, and then office products. From there he segued to tech.

“With journalists, you need to package things up the way they need it. You can’t just spam all these people with press releases.”Daniel Freeman

And that placed him right in the hot seat in 2007 when Charles Arthur—formerly The Guardian‘s technology editor and now a contributor—wrote a widely influential blog post, “Die, PR, die, or raise your game and learn about asynchronicity.”

As Arthur put it, “I do get impatient with people who don’t have a clue about the story they’re pitching. Sorry, but I do. PR is about conversation, but if you start the conversation by saying something that indicates you have no idea about the subject in hand then it’s like saying ‘Ooh, what a nice dog’ and pointing to someone’s cat. [Journalists] will treat you accordingly. … We feed on information. If you haven’t got it, we’ll bite your heads off just to check there isn’t any lurking down there.”

After a lot of reaction, Arthur would go on to update his post with some balance, assuring readers that “good PR is excellent.”

But the point had a lasting effect on Freeman and how he thinks of the role of the public relations agent in publishing and other fields, he says. A PR rep who doesn’t study a news medium to determine that it covers the right topics—or doesn’t master that topic before pitching it—is forgetting that there actually are, effectively, two clients in the picture: the one paying and the press. Neither can be done without.

“With journalists,” Freeman says, “you need to package things up the way they need it,” so that they can make the best use of it for their readerships, and that serves the interest of the client, of course. “You can’t just spam all these people with press releases.”

‘To Spread Our Wings’

“Our agency model will place integration and collaboration at the heart of how we work with publishers.”Liz Mallett

Rahman is, like Freeman, a former associate director with Midas PR, and was with the company for seven years. There, she led the PR team that launched the industry-wide Books Are My Bag campaign, which is easily among the most broadly supported PR campaigns in the UK’s book industry. That’s saying something because the British industry is particularly fond of its campaigns, and Books Are My Bag had unusually robust buy-in from across the books community.

Heading up the Audible account, Rahman, worked across the consumer and corporate profile of the company from promoting its titles to raising awareness of audio as a significant publishing category mass-market entertainment in the UK.

She also ran campaigns in the adult coloring-book fad, working with Millie Marotta’s titles on behalf of Pavilion Books. Her journalistic background is as a news and entertainment reporter for Eastern Eye.

In a prepared statement, Rahman is quoted, saying that she and her two partners “feel the time is right to spread our wings as an independent agency. Having built up many years’ experience in the industry, we will continue to work with brands in the publishing sector as a collective. We have spent a lot of time analyzing what a client wants from a PR agency in 2018 and our agency model has been founded with these principles in mind.”

And Mallett has more than five years of in-house publishing experience, having been publicity director for John Blake Publishing.  She specializes in mass-market book PR campaigns and major newspaper serializations and knows—as the new PR company’s PR material says—how to make books into headlines.

Mallett’s prepared comment, in part, reads, “It’s sometimes essential that PR campaigns take place as part of a dialogue between different departments and that publicists understand broader aspects of publishing, distribution and sales to have the most impact with their campaigns. Our agency model will place integration and collaboration at the heart of how we work with publishers.”

In an interesting descriptive approach to their offer, Rahman, Mallett and Freeman anticipate dividing what they do into five groups:

For all the breadth in their backgrounds—and their high regard for their former colleagues at Midas, Rahman calling their time there “a formative, enriching, and wonderful experience”—all three of them seem to see books publishing as a core interest at this point, as well as a likely driver of clientele.

And when it comes to the realities of opening their own shop, Freeman says that the three friends and colleagues have found it challenging to get their own PR materials together. “It’s not so easy,” he says with a laugh, “to publicize yourself.”