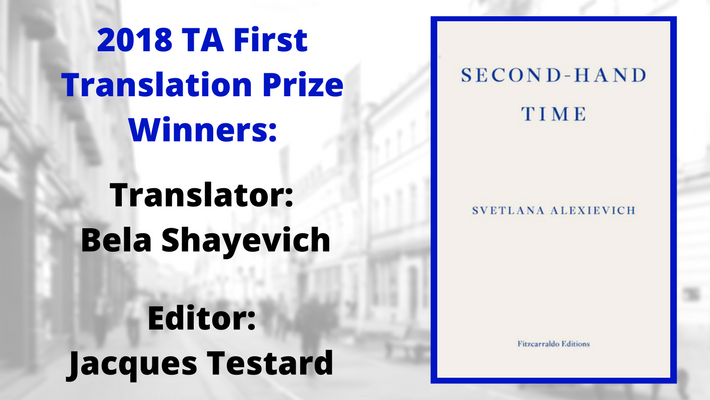 Bela Shayevich is the winner of the TA First Translation Prize for her English translation of ‘Second-Hand Time’ by Svetlana Alexievich, published by Fitzcarraldo Editions editor Jacques Testard 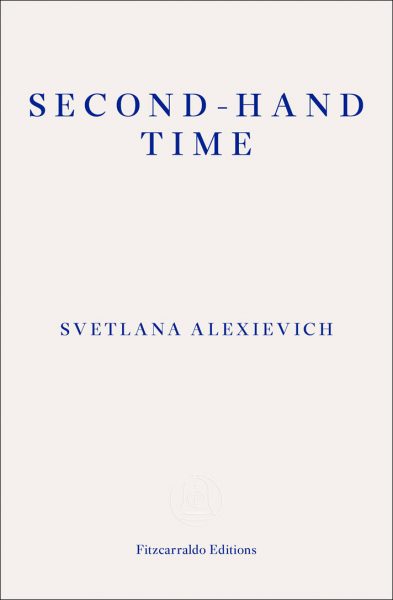 In the tradition of Fitzcarraldo Editions, nonfiction is published in white covers with blue titles, and the opposite color scheme for fiction

The English translation by Bela Shayevich of Nobel-winning,  700-page Second-Hand Time by Belarusian author Svetlana Alexievich has just been announced the winner of the inaugural TA First Translation Prize this evening (March 1) at the Society of Authors‘ translation prizes program in London.

The honor is shared by the translator and by the editor—in this case, Jacques Testard, who edited the winning work for its Fitzcarraldo Editions (May 2016) publication.

The book’s winning translator, Shayevich, is a Russian-American artist and translator who studied comparative literature at Emory University in Atlanta. Her master’s degree in Russian translation is from Columbia University. 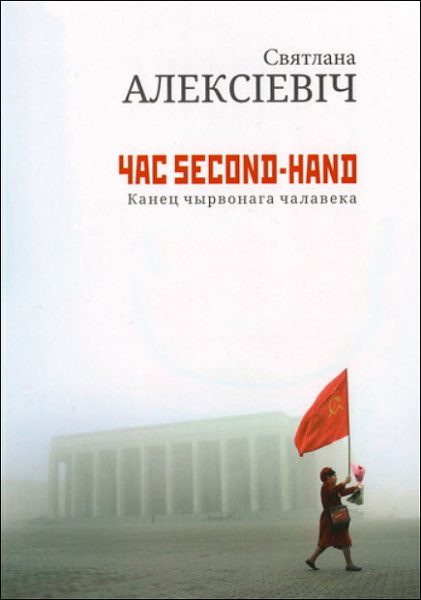 ‘Second-Hand Time’ was published in 2013 by Moscow’s Vremia, and was awarded the Arthur Ross Book Award Bronze Medal by the Council on Foreign Relations in 2017

In an interview for the Society of Authors, Shayevich is quoted, saying, “As an immigrant, I have always translated. When I was a teenager, it was to share the Russian rock lyrics I loved, then, in my early 20s, it was the experimental poetry from the former Soviet Union that I thought would blow the minds of my peers.

“Eventually, this grew into an interest in translating texts written by Russian activists, which I thought could inspire the people around me and spur them to action.”

Editor Jacques Testard is Fitzcarraldo Editions’ founder. Prior to that work, he was a commissioning editor at Notting Hill Editions and co-founded the arts and literature journal, White Review. In speaking with Publishing Perspectives at Frankfurter Buchmesse in 2014, Testard said, “Fitzcarraldo was primarily set up because I feel that there is space in the UK publishing scene for serious literary press that takes risks on ambitious, imaginative and innovative writing engaged with the contemporary world in English and in translation.”

Alexievich, born in Ukraine and raised in Belarus, writes in Russian. She is known for the choruses of voices she brings together in her books to speak to pivotal historical moments in nonfiction. Her works include The Unwomanly Face of War (1985), Zinky Boys (1990), Chernobyl Prayer(1997) and Second-hand Time (originally published in 2013), which won the 2015 Nobel Prize in Literature. 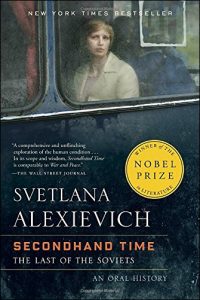 In a prepared statement, TA Prize founder and gifted translator Daniel Hahn, is quoted, speaking in soaring terms of the TA Prize’s first winner: “Bela Shayevich’s translation is a work of extraordinary, sustained virtuosity, meeting the challenges of this huge polyvocal text energetically and fearlessly.

“And Bela Shayevich, like Alexievich herself, deploys such great skill and sensitivity to ensure that all these voices are properly heard.”

The jury members for the prize were Hahn and fellow translators Rosalind Harvey and Bill Swainson.

In information about the book, itself, Fitzcarraldo writes, “Alexievich brings together the voices of dozens of witnesses to the collapse of the USSR in a formidable attempt to chart the disappearance of a culture and to surmise what new kind of man may emerge from the rubble. Fashioning a singular, polyphonic literary form by combining extended individual monologues with a collage of voices, Alexievich creates a magnificent requiem to a civilization in ruins, a brilliant, poignant and unique portrait of post-Soviet society out of the stories of ordinary women and men.”

Although it didn’t credit Bela Shayevich as the translator of the work—notice that neither Testard’s Fitzcarraldo cover nor the Penguin Random House cover for Second-Hand Time credit the translator—the Times Literary Supplement ran an excerpt from the Shayevich translation as it was being released in May 2016:

“Today, people just want to live their lives, they don’t need some great idea. This is entirely new for Russia; it’s unprecedented in Russian literature. At heart, we’re built for war. We were always either fighting or preparing to fight. We’ve never known anything else–hence our wartime psychology. Even in civilian life, everything was always militarized. The drums were beating, the banners flying, our hearts leaping out of our chests. People didn’t recognize their own slavery–they even liked being slaves.”

“Bela Shayevich’s translation is a work of extraordinary, sustained virtuosity, meeting the challenges of this huge polyvocal text energetically and fearlessly.”Daniel Hahn

Hahn is joined in speaking of the judges’ rationale by Swainson, who’s quoted, saying, “This is a great book. What Svetlana Alexievich has done is to create a literary form that weaves the experiences of many individuals into a wonderfully rich choral work, articulating not so much the facts of post-Soviet life, as the deep estrangement and regret at waking to a baffling new world, unable either to let go of the old or to return to it.

“Alexievich has written a masterpiece of conception and pacing; Bela Shayevich’s English text has such energy that one comes away from reading simultaneously hurting and exhilarated.”

The £2,000 prize is being shared equally by translator Shayevich and editor Testard, and has been presented at the Society of Authors Translation Prizes ceremony at the British Library tonight. The “TA” in the prize’s name is for the UK’s Translators Association, and is a prize administered along with several others by the Society of Authors, the London-based advocacy organization for writers, a counterpart to the US industry’s Authors Guild. 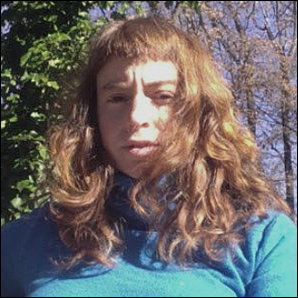 In the Publishing Perspectives interview in July, when translator Daniel Hahn received €25,000 of the €100,000 International Dublin Literary Award with author José Eduardo Agualusa for A General Theory of Oblivion, Hahn used some of his winnings to create this new award to recognize and honor debut translators.

Part of the admiration among many in the industry for Hahn’s generosity has to do with his purposeful recognition of editors, not just translators. One of Hahn’s intentions with this award is encouraging editors who take chances on new translators and develop their efforts to improve the outcome. 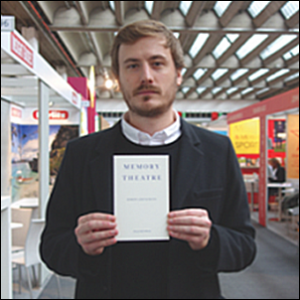 As we reported, the shortlist for the prize included fiction, nonfiction, and a graphic novel from six countries, comprising translations into English from five languages—Arabic, French, Polish, Russian, and Thai.

The other five shortlisted works are:

The winner of the Goethe-Institut Award for new translation from the German is Mandy Wight for her translation of an extract from Juli Zeh’s Unterleuten (Luchterhand Literaturverlag). Jurors’ comment: “Mandy Wight’s submission epitomises the principle that a good translation reads as if it’s not a translation–and it reads with arresting skill and fluency.”

The Goethe-Institut Award, presented since 2010, is a biennial award of €1,000 for the best translation from a chosen text. The winner is invited is invited to attend the Leipzig Book Fair, which includes a place at the International Translators’ meeting. The judges were Annemarie Goodridge, Eva Hoffman and Oliver Kamm.

The winner of the Saif Ghobash Banipal Prize for Arabic literary translation is Robin Moger, for his translation of The Book of Safety by Yasser Abdel Hafez (Hoopoe Fiction, AUC Press). Jurors’ comment: “Robin Moger has created an alluring translation of The Book of Safety by Egyptian author and journalist Yasser ‘bdel Hafez that captures beautifully the moods, paces, rhythms and nuances of the Arabic original and, ruthlessly but lovingly, lures us into the conflicting, conspiratorial, and violent world it draws.”

The shortlist included: Katherine Halls and Adam Talib for The Dove’s Necklace by Raja Alem (Duckworth), Leri Price for No Knives in the Kitchens of This City by Khaled Khalifa (Hoopoe, AUC Press) and Anna Ziajka Stanton for Limbo Beirut by Hilal Chouman (Center for Middle Eastern Studies). The judges were Pete Kalu, Alastair Niven, Professor Wen-chin Ouyang and Salam Sarhan.

The winner of this year’s Schlegel-Tieck Prize for translation from the German is Allan Blunden, for his translation of Nightmare in Berlin by Hans Fallada (Scribe). Jurors’ comment: “Allan Blunden has made an outstanding contribution to the accessibility of the author’s late works for English-language readers… Through Blunden’s work Fallada offers us insights not only into the immediate days, weeks and months following the capitulation of May 1945 but also in the environment of the Soviet zone of occupation which was only a few years later to develop into the German Democratic Republic.”

Katy Derbyshire was commended for her translation of Bricks and Mortar by Clemens Meyer (Fitzcarraldo Editions). The judges were Emily Jeremiah and James Jordan.

The Scott Moncrieff Prize: Will McMorrars and Thomas Wynn

The winners of the Scott Moncrieff Prize for translation from the French are Will McMorrars and Thomas Wynn, for their translation of The 120 Days of Sodom by The Marquis de Sade (Penguin Classics). Jurors’ comment: “Without in any way giving in to hyperbole, I would say that this translation is a 21st-century monument, changing not only the way in which we view the French 18th century, but providing a guide to the present and future.”

Anthony Melville was commended for his translation of Anciet or the Panorama by Louis Aragon (Atlas Press). The judges were Andrew Hussey and Ian Patterson.

The winner of the Premio Valle Inclán for translation from the Spanish is Margaret Jull Costa for her translation of On the Edge by Rafael Chirbes (Vintage, Harvill Secker). Jurors’ comment: “Chirbes’ anguished, bleak view, interspersed with moments of lyrical beauty, sets a translator enormous challenges, for sentences and paragraphs extend for pages, often with abrupt changes in narrative voice and chronology. Margaret Jull Costa’s translation meets all these challenges most admirably, capturing every rhythm and cadence of description and of the myriad voices with sustained brilliance.”

Rosalind Harvey was commended for her translation of I’ll Sell You a Dog by Juan Pablo Villalobos (And Other Stories). The judges were Katie Brown and John King.

David Doherty was commended for his translations of The Dutch Maiden by Marente de Moor and You Have Me to Love by Jaap Robben (both by World Editions). The judges were Jane Draycott, Donald Gardner and Laura Watkinson.