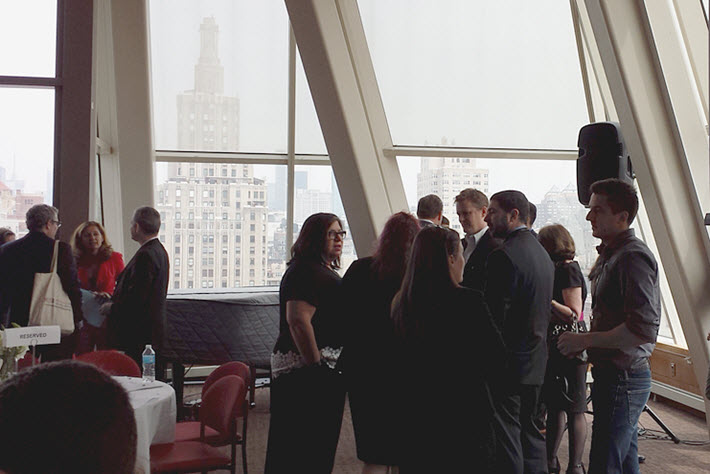 Touting again a ‘mix of book publishing people and people from media companies and ancillary companies,’ this year’s PubTechConnect conference will focus on innovation in many forms. 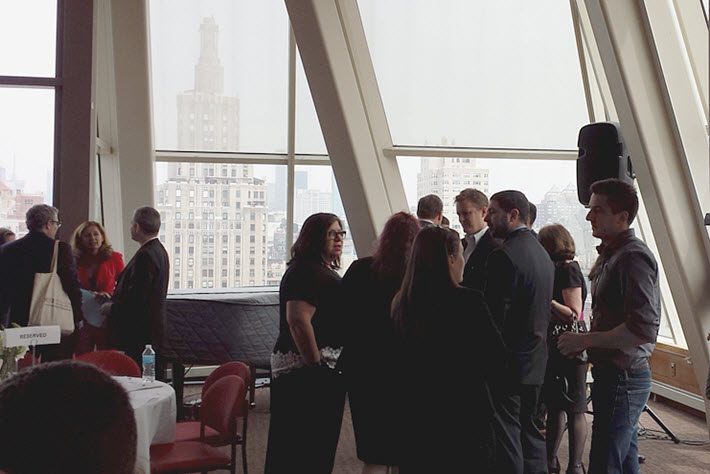 Speakers and attendees at the inaugural PubTechConnect in 2017 talk during a break at New York University’s Kimmel Center. Image: Porter Anderson

The Need To ‘Embrace Innovation’

Last year’s inaugural outing for the PubTechConnect conference in New York City was a success not because it lectured its book-publishing audience on the wisdom of other tech industries’ accomplishments but because it didn’t.

Produced by Publishers Weekly and New York University’s School of Professional Studies Center for Publishing, the one-day event left it to the audience to gather what it might from speakers who in some cases, as Publishing Perspectives reported, were as new to each other as they were to many people in publishing.

“At some point late in the morning,” as we wrote, “it became evident that these folks from organizations as disparate as Dropbox and the City of New York don’t frequently hear from each other anymore than publishing hears from them. All day long, there were interesting listening patterns going on… quick notes being made of something heard from the other end of a panel.”

Can that lightning strike twice? The producers hope so. The upcoming second edition of PubTechConnect is set again at New York University’s Kimmel Center on Tuesday (March 6), from 9 a.m. to 5 p.m.

This time, the focus is formally described as being on “how publishers need to embrace innovation in all aspects of their business,” a topic that has led many well-intentioned events over the years to wander into the pulpit. And like beauty, innovation is often in the eye of the beholder. 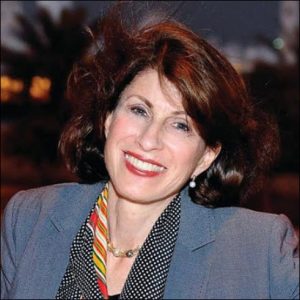 The conference’s co-chair Andrea Chambers, however, is upbeat. The director of NYU’s School of Professional Studies Center for Publishing–whose co-chair is Publishers Weekly’s Carl Pritzkat–tells Publishing Perspectives that despite the multiplicity of disciplines and viewpoints last year focused on disruption and the digital dynamic, “There was a camaraderie. We’re all in the same boat. And we wanted to build on that this year.”

That has led them, she says, to follow the same pattern as before: “Everything we do is a mix of book publishing people and people from media companies and ancillary companies because we do like this blend of fresh viewpoints and fresh voices from inside and outside of publishing.

The conference includes an afternoon breakout session on the topic with Jonathan Sandler, who leads Gensler’s media practice area, and Sumita Arora, who’s Gensler’s studio director to dispense “practical advice” on the issue.

The most consoling commentary on the topic, however, may come from Jeremy Caplan of CUNY’s Tow-Knight Center for Entrepreneurial Journalism, who does know newsrooms. His topic: “Maintaining Your Digital Sanity in a Collaborative Workplace: Communication Tools and Tactics That Get the Job Done.”

Chambers concedes that putting the event together for a second year is easier than the first, “but we want it to stay fresh,” she says.

Andrea Chambers: ‘From Inside and Outside Publishing’ 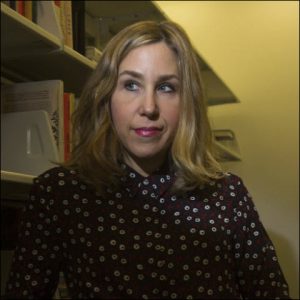 The day starts off with news in mind, too, as The New York Times‘ book coverage lead Pamela Paul and mobile strategy assistant editor Sam Dolnick engage in a keynote conversation with NBC’s Anand Giridharadas on the paper’s reconfiguration of itself. Few missed the paper’s report in February that it had added 157,000 net digital-only subscriptions in the fourth quarter of last year, with total subscription revenue for 2017 surpassing US$1 billion.

And the day closes in a newsy environment, too, with a closing keynote conversation between Thrillist founder Ben Lerer of Group Nine Media and Wired’s Jessi Hempel on creating media companies in today’s marketplace.

Between those two keynote conversations there are a lot of comings together on related topics. 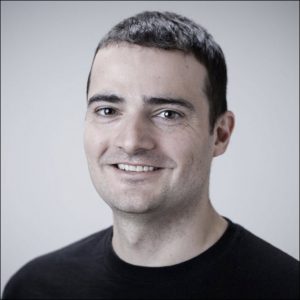 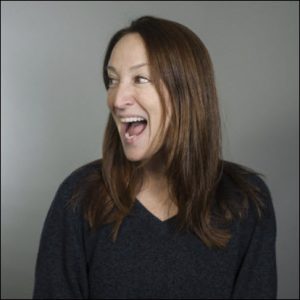 During the day, there are 15-minute “flash briefs” from various topics with speakers including Ballantine Bantam Dell/PRH’s Kristin Fassler on discoverability; Refinery 29’s Elisa Kreisinger on video strategy; and Google Play’s Andrew Brown on sharing “your publishing message through the wonders of artificial intelligence.” 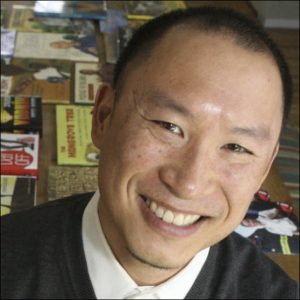 Chambers says, however, that she expects the “Diversity and Inclusion” workshop in the early afternoon on Tuesday to be of special interest to many in the publishing audience. She may well be right, because of how much focus there is this season on the industry’s efforts to find traction in the multicultural realities of publishing’s readership and content trends.

The fourth member of the panel is agent Adriana Domínguez of Full Circle Literary, and Publishing Perspectives had a chance to speak with her about some of her observations from her perspective in literary representation. 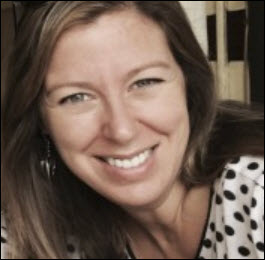 Specialized as she is in children’s literature, Domínguez is a ready fan of Jason Low, for the 2015 Diversity in Publishing study the company released in 2016. It was an exercise largely thought to have given us the best look yet at the contours of many issues around diversity and inclusivity in the US industry. Publishing Perspectives has learned that the company plans to run another iteration of the study in 2019.

“I thought it was really wonderful how many publishers participated” in the Lee & Low study, she says.

And like innovation (and beauty), diversity is one of those things that can, of course, mean different things to people, according to their interests and experiences. When taken as a whole, Domínguez points out, whether looking for diversity in terms of gender or race or disability or other factors, “The study showed, in that broader definition of ‘diversity,’ that it’s skews toward being a less diverse workplace” in publishing today “than it should be.

“For me, it’s always about who is actually working to enact change and who is doing the grassroots work,” Domínguez says. She points to the People of Color in Publishing organization as an example of “groups that are looking to help diversify the world of publishing.”

“I think what these groups of people of color or Latinos in publishing do is help to disseminate information to people of color, so if there’s an opening in publishing, the word gets out and reaches a little bit farther. So we break away from an insular tendency we may have in the industry. The industry is small and everyone knows everyone else. And what happens is that you do tend to recommend people you know. It becomes difficult to expand beyond your original base.”

On social media: “It’s given people who didn’t previously have access to the industry, the door.”Adriana Domínguez

This kind of effort holds promise for “opening up the doors of publishing,” Domínguez says, “to a broader group of people,” who can enrich and deepen publishing’s workforce and output. “Recruitment has to be a big focus. It has to be a large portion of the mission statement of anyone” who’s working for diversity in the business, she says.

Domínguez sees “the role that social media has played in all this” as the most discernible change she’s seen in her 20 years in the business. “It’s given people who didn’t previously have access to the industry, the door.” Through social media, for example, she says a reader finds out that “a panel at BookCon [which follows BookExpo at the Javits Center each year] has all of your favorite diverse authors and they’re all superstars and, wow, you have to go to that panel.

“It’s been really moving to see this,” she says, “and young people have been at the forefront, whether it’s people who want to enter publishing or the readers, themselves, who see diversity in an entirely different way” than members of previous generations may think of it.

In terms of what she sees selling and editors’ receptivity, she applauds “the difference in the last couple of years alone in the industry’s output, certainly in Latino books” and other areas of multicultural interest. The business has made “a substantial jump from previous years,” she says.

And while there’s still a lot of ground to cover, Adriana Domínguez maintains that there’s a lot of progress occurring. “I think it’s important to note these things. I do want to give the children’s side of the business credit for really leading the way in terms of increased output, not only in quantity but also in quality. It’s a great time.” 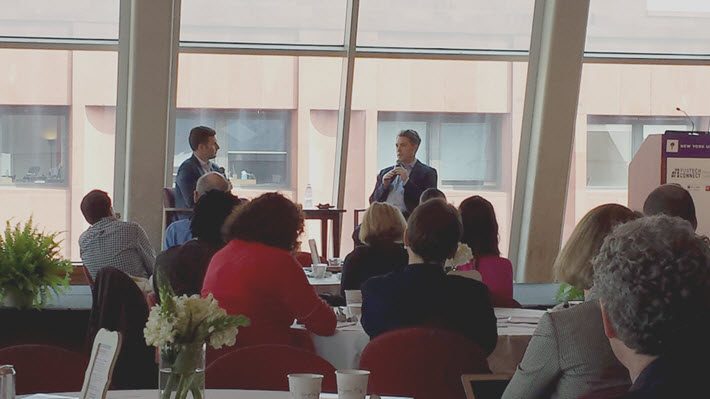 More information and registration details about Tuesday’s PubTechConnect conference is here. And Publishing Perspectives’ coverage of last year’s inaugural outing for the event is here.