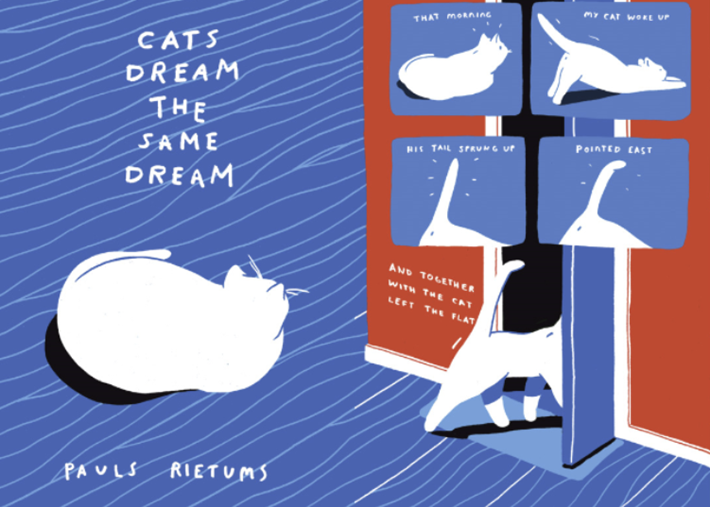 With illustration mentors crossing borders to work with young graphic artists in Estonia, Latvia, and Lithuania, a new Pop Up Creators project announced in London celebrates art and internationalism.

An excerpt from Latvian illustrator Pauls Rietums’ ‘Cats Dream the Same Dream,’ from the coming Pop Up Creators exhibition. Image Pop Up

‘In These Divisive Times’

In an outreach effort that coincides with the Baltics’ Market Focus at London Book Fair, it’s been announced today (March 12) that a major  illustration exchange involving work from Estonia, Latvia, Lithuania, and the UK will be on exhibition in the British capital from April 10 to May 20.

Based in this case in children’s books and publishing arts, the Pop Up Creators program is another instance of the kind of cross-cultural and boundary-transcending work being increasingly valued amid challenges to internationalism and the freedom to publish.

The show will feature work from a year-long collaboration between 150 young artists from 16 universities, plus 18 professional illustrators from four countries. The young illustrators are 25 or younger and press materials say that 80 percent of them have English as a second language and/or are BAME (black, ethnic, and Asian minority). The younger artists have been specifically mentored for the work of the program by the professional illustrators engaged to participate.

Their output is to be presented in a leporello or concertina-syle format and published by Nobrow Press in the UK; by Päike Ja Pilv in Estonia; by Kus! in Latvia; and by Lithuania’s Vilnius Academy of Arts Press.

As part of the exhibition, which is funded in part by a grant from Arts Council England, the program is to launch Pathways. Further funding is being sought for a children’s publishing sector training element of the program. Pathways is conceived as an online platform developed with the illustration agency Inkygoodness. That digital development is designed “to curate and showcase diverse emerging illustrators and comic artists” so that children’s publishers are can find and license the work.

“If the funding is secured,” say press materials provided to Publishing Perspectives, “those featured on the platform will access opportunities for the training in the children’s publishing sector training and progression, supported by three UK Bridge organizations: Artswork, Festival Bridge, and Royal Opera House Bridge.”

“There’s nothing more important in these divisive times than supporting 150 young artists across four European countries, from a vast array of ethnic backgrounds and linguistic traditions.”Dylan Calder

One of those speakers and a juror in the program, the illustrator William Grill, who has mentored younger artists in the Estonian group, is quoted on the newly announced project, saying, “Some students shone in their storytelling abilities, others in their power to create beautiful images. Pulling these two things together is never easy. I was really encouraged to see them embrace the project, overcome new obstacles and grow in the process. It’s been an enriching experience working alongside the young artists.”

Another of the mentors, Hamish Steele, the author of Pantheon, who mentored the Latvian illustrators, is quoted, saying, “I hope this project inspires these talented young artists to not wait for opportunities and clients to find them but to put their own stories into the world. The industry is bigger than ever but the world is smaller, so I hope they remember that whatever their circumstance, there are avenues (just like this project) to have their work seen.” 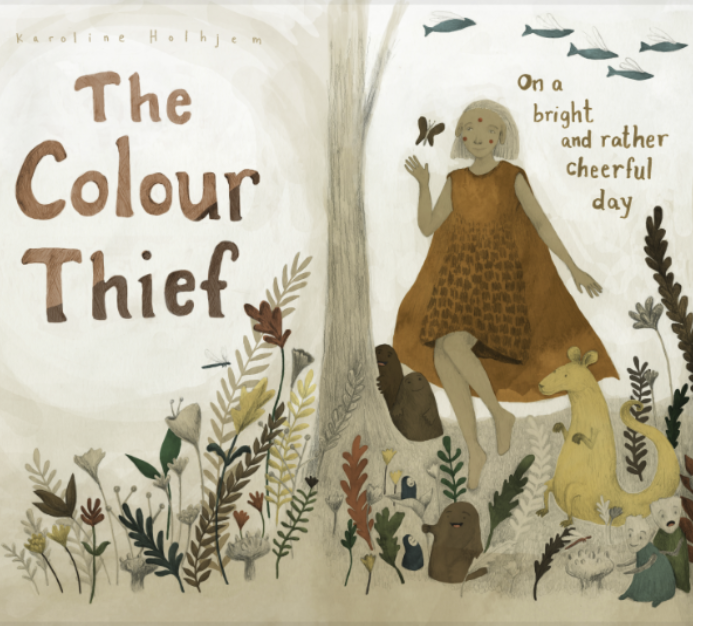 ‘The Colour Thief’ from UK illustrator Karoline Holhjem is part of the Pop Up Creators exhibition. Image: Pop Up 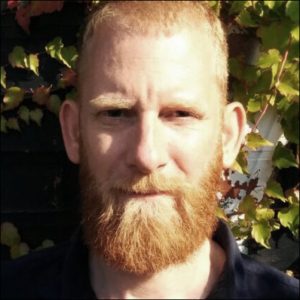 Pop Up Project is a nonprofit organization in the UK supported by Arts Council England and the Paul Hamlyn Foundation in working to “engage children, schools, families and communities through far-reaching, imaginative and innovative literature programs and events which impact on reading and writing enjoyment and skills.”

Pop Up’s co-curator in the project is the UK’s House of Illustration, a public gallery dedicated to illustration and graphic arts since its establishment in King’s Cross in 2014 by Sir Quentin Blake. The gallery curates 10 shows per year and is a commissioning house for new work.

The partner involved in working toward the Pathways digital development, Inkygoodness, started as a collective of illustrators who worked together to create exhibitions. It has grown into an art and culture platform and online resource with an international audience of some 60,000 for its worio

In the UK, the exhibition itself will be seen at the Royal Over-Seas League in St. James’ Street, now 108 years old and created in 1910 to promote cultural understanding between nations of the Commonwealth. The league is non-partisan and has a special emphasis of its own on supporting the development of young artists’ careers.

In a prepared statement, the writer of the foreword for the exhibition, Axel Scheffler, the acclaimed German illustrator based in London, is quoted, saying, “Children’s books and children’s book illustration are perhaps an underestimated means to further cultural exchange. Having illustrated a book (The Gruffalo) that has been, to my own surprise, such an international success–translated into more than 70 languages–proves that stories and images have a universal appeal.

“The body of work resulting from this project impresses in its variety of styles and approaches and I look forward to seeing the further development of these young talents. This artistic exchange, bringing together British and Baltic illustrators and students, against the backdrop of London Book Fair, is an exemplary attempt to strengthen the dialogue across Europe and can hopefully be repeated in the future.”

And Dylan Calder, the founding director of Pop Up, is quoted, saying, “There’s nothing more important in these divisive times than supporting 150 young artists across four European countries, from a vast array of ethnic backgrounds and linguistic traditions, to tell and share their stories.” 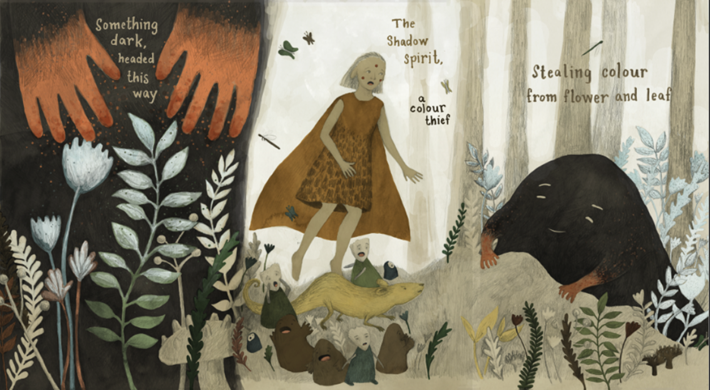 An excerpt from ‘The Colour Thief’ by UK illustrator Karoline Holhjem in the Pop Up Creators exhibition. Image: Pop Up