Announcing an IPO on the Warsaw Stock Exchange’s NewConnect index for this year, the nine-year-old Legimi subscription service pursues development in Germany and China.

Legimi officials say the company has more than 30,000 subscribers, and that they spend an average €6 (US$7.39) per month on its platform. The company’s app has been downloaded more than 1 million times, according to company information.

In the first half of 2017, the company reported sales revenues of about 3.3 million zloty (US$970,000) which represented a 90-percent increase compared with the same period a year earlier, according to data from its official presentation for investors. Legimi’s earnings before interest, taxes, depreciation, and amortization (EBITDA) for the first six months of 2017 totaled some 600,000 zloty (US$176,000).

Co-founding chief Mikołaj Małaczyński says the company is already operating in Germany, where it reproduced its services from the Polish market, offering about 100,000 titles in the subscription service and about 400,000 ebooks in its à la carte product range.

“Legimi has successfully tested its business model,” Małaczyński tells Publishing Perspectives, “which consists of offering an ebook reader coupled with a subscription and financing for the ebook reader that allows us to price it at 1 zloty in Poland.

“We introduced the same model in Germany in late 2017. We maintain direct relations with publishers and key content aggregators.”

In Germany, Legimi offers a subscription model paired with an ebook reader priced at €1 (US$1.25), available as part of a 24-month plan. However, the firm states in its presentation, “To date, the performed marketing and sales activities [in Germany] have been significantly limited because of a lack of funds.” The IPO is designed to allow Legimi to jumpstart its promotional activities in the German market.

With its foothold in the German market established, the company is currently planning to launch its presence in China, according to Małaczyński.

“We’ll expand to China this year,” he says, “and both foreign projects will be supported by a promotional campaign that will be financed from the funds from the IPO.”

In the Chinese market, the company intends to attract customers by offering an ebook reader coupled with an ebook plan for one Chinese yuan (US$0.16).

Katarzyna Domańska, a spokesperson for book and magazine publisher Edipresse Poland, tells Publishing Perspectives that the advantage for the publishing house in working with Legimi is that the company minimizes its involvement in the pricing of titles.

“Owing to the subscription model, the reader can explore the full offer, and the publisher doesn’t need to compete against others by offering discounts, promotions, and cutting the prices,” Domańska says. 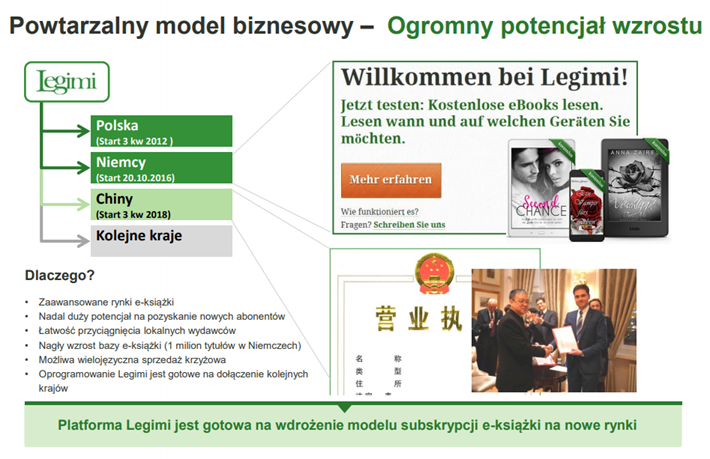 From the Legimi IPO presentation

Needless to say, by expanding to Germany and China, the ebook subscription service is hedging its bets in Poland. The country’s ebook market has posted rapid growth over the past years, doubling from an estimated 40 million zloty (US$11.7 million) in 2014 to some 100 million zloty (US$29.3 million) last year, but, as Legimi concedes in its IPO prospectus, “This segment still cannot compete against paper books.”

Małaczyński also says that the company is also working on acquisitions of foreign market players, as confirmed by the latest development.

On March 12, Legimi announced it signed a letter of intent regarding a potential acquisition of Germany’s Readfy GmbH, a company that offers an ebook reading app in a freemium model, offering more than 100,000 titles to its users.

“The parties intend to finalize the sales agreement once an audit is performed by the end of April 2018,” the Polish company says. The value of the planned acquisition has not been disclosed.

Legimi was established in 2009 and is headquartered in Poznań, in western Poland. The firm says it cooperates with more than 300 publishers and four international content aggregators. In Poland, Legimi offers some 22,000 ebooks and audiobooks under its subscription model, and has a total of 40,000 ebooks in its database.