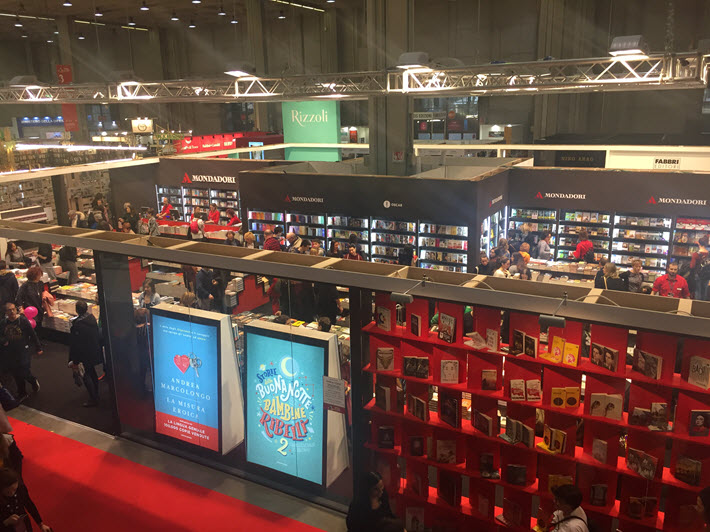 The second year of Milan’s book fair, Tempo di Libri, saw growing attendance, according to organizers. We talk to literary agent Marleen Seegers, who was at the Milan International Rights Center. 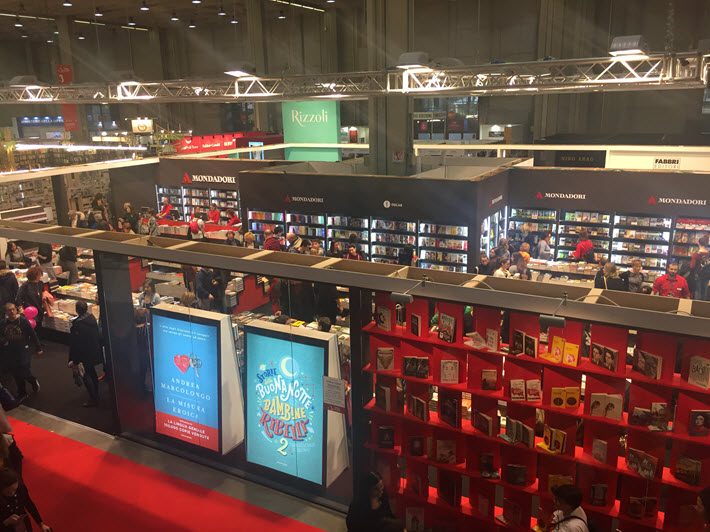 Milan’s Tempo di Libri closed its second iteration a week ago, on March 13, and now is announcing a big bump in attendance figures over the inaugural fair in 2017.

This year, the fair reports that it sold 97,240 tickets—a 60-percent jump over the previous year for this five-day event, which is organized by the Association of Italian Publishers (Associazione Italiana Editori, AIE) and trade-fair producer Fiero Milano.

The programming this year featured an exhibition on Caravaggio and those influenced by his work, and the programming was organized into five daily themes: women, rebellion, Milan, “books and image,” and “a digital world.”

And AIE reports that some 425 exhibitors were on-hand in the event’s 35,000 square meters of space. Attendees are said to have scheduled more than 850 meetings with each other among some 1,200 industry visitors.

In a prepared statement, AIE president Ricardo Franco Levi is quoted, saying, “We wanted it to be a book fair and it was. Milan has spoken and said aloud ‘Book Time is something we like and want more of.”

The programming opened on International Women’s Day and drew more than 2,500 journalists and bloggers, while some 2.1 million unique users are said to have looked in on the event’s site during the run of the fair. A part of the buzz around the fair this year had to do with Milan being named in 2017 one of UNESCO’s Creative Cities network in the category of literature. 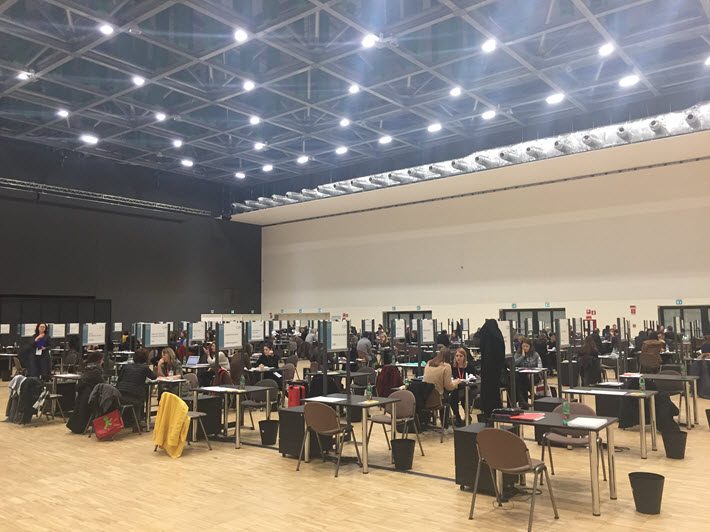 The professional program, including the Milan International Rights Center (MIRC), seems to have made strides. As Publishing Perspectives reported in February, most of the 2017 Frankfurt Fellows were in Milan for the fair on March 6 and 7, a partnership with the Frankfurter Buchmesse facilitated by Italy’s upcoming Guest of Honor turn at Frankfurt in 2023.

The Frankfurt-Milan cooperation sent the fellows to  Italian publishing houses and bookstores prior to the fair’s opening. Scheduled to participate this year were representatives of:

Gateway to the Trade Show Season? 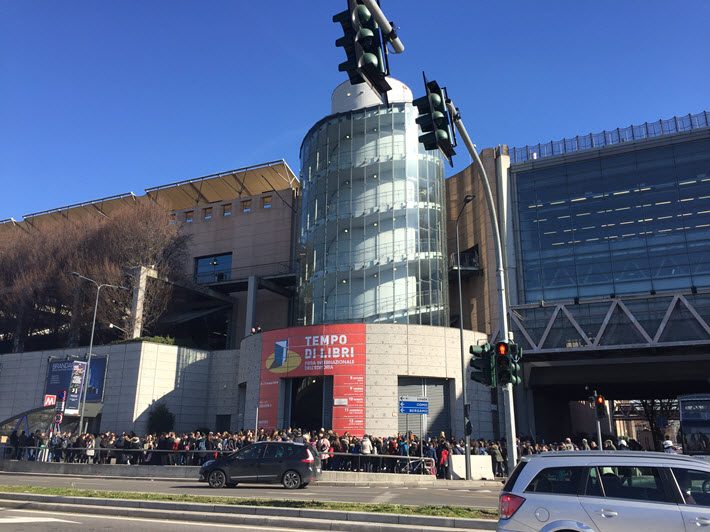 Milan’s organizers are positioning Tempo di Libri as the “first important event in the international publishing calendar,” and they tell Publishing Perspectives that a handsome cohort–more than 500 participants–were registered for the rights center this year, representing 32 countries and holding more than 6,500 meetings. 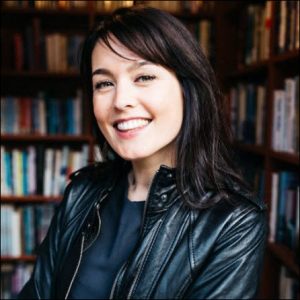 For more details on how the rights center action looked, we asked foreign rights agent Marleen Seegers of 2 Seas Agency in Ojai, California, to give us an agent’s-eye view of this year’s operation in Milano. She was invited by the rights center to participate and was given her accommodations at a hotel handy to the event.

She points out that those who had attended the fair in its first year in 2017 found the venue quite far from the city center, and scheduled too close to Easter for many Italians to manage to get there. This year, she says, the venue, Fieramilanocity, was a good location, 20 minutes from Duomo di Milano and the city’s beautiful arcade.

In terms of pre-event organization, she found “the list of international attendees that we had access to a few months ahead of the event” to be useful, “with new participants added daily … a good balance between their countries of origin as well as the division rights buyers/rights sellers/literary scouts.”

And in terms of her own European tour–which has included stops in Venice and Paris–”It turned out to be a great way to start the book fair season,” she says.

“It was possible to re-schedule meetings last-minute without any fuss, and even though my schedule was fully booked I still had enough time to catch up with others in between meetings.”Marleen Seegers

“Unlike Frankfurt and London, Milan had a very mellow atmosphere,” Seegers says. “People were flexible. It was possible to re-schedule meetings last-minute without any fuss, and even though my schedule was fully booked I still had enough time to catch up with others in between meetings. The rights center was bright and spacious, and had a good wi-fi connection.

“Even though the MIRC’s fellowship is not quite like the ones of Frankfurt or Jerusalem, the fact that we were all staying in the same hotel helped a lot and facilitated organizing dinners and drinks.”

Perhaps of use to the programmers, however, Seegers notes that some of the Italian editors were less happy with the event, and for a logical reason.

“Though they all agreed they were delighted to get to see international rights sellers right at the start of the book fair season” and thus learn about some key projects early in the year, “some questioned the necessity of a fair in Milan,” she said.

Milan’s concentration of its major publishing forces in Milan means, as they told her, that “they can meet throughout the year.

“They also said they wondered whether the fair attracted enough crowds, which might mean that the sales of books during the fair don’t make it worth the investment” to have a stand.

Coming in May: Torino’s Fair 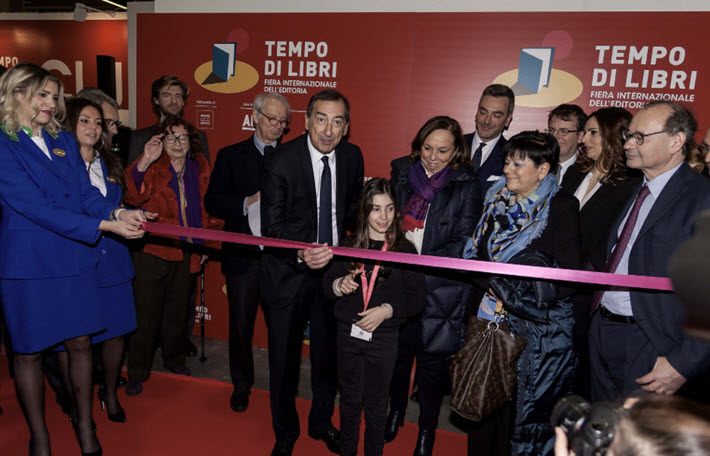 Seegers does caution others thinking of trying the new Milan fair next year that scheduling may be an issue. “In the end my schedule didn’t match with that of several people I really wanted to see,” she says, a result of some problems with the online meeting-scheduling system.

“Of course, the system has its advantages,” she says. “It’s time-saving since you avoid emailing back and forth to arrange meetings. But I’d prefer a system that somehow allows prioritizing certain meetings when sending out and/or accepting requests, and one that keeps track more closely of the number of meetings that are accepted compared to the maximum possible number of meetings—which turned out to be way too many.”

Seegers also notes that some Italian industry players continue to question the newly arrived Milan fair, which of course is geographically close to the site of Torino’s annual fair, the Salone Internazionale del Libro, which this year is scheduled for May 10 to 19.

Needless to say, the discussions and comparisons will continue. Seegers has worked her notes into an extended blog post, in case you’d like more of her impressions: you’ll find that here. Ahead of London Book Fair, you also can find Seegers’ catalogues here. 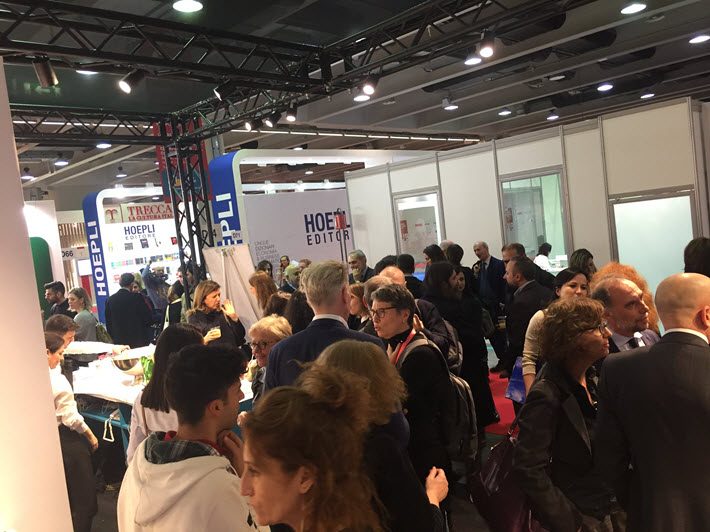 More from Publishing Perspectives on the Italian industry is here.