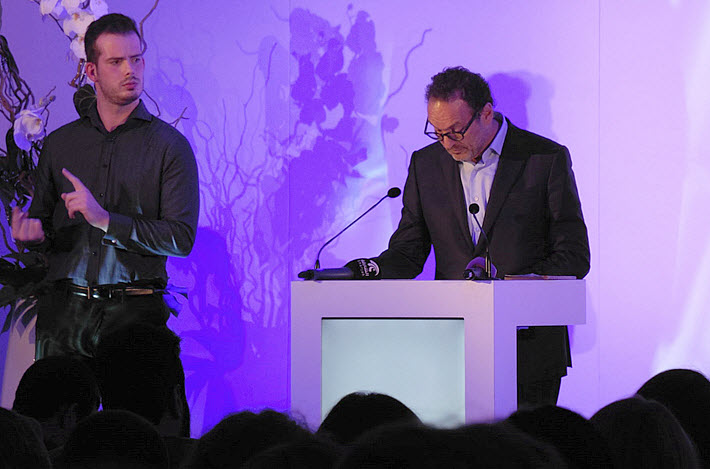 The Lifetime Achievement Award is to go to SAGE Publishing founder Sara Miller McCune on April 10 as part of London Book Fair’s and the Publishers Association’s International Excellence Awards. 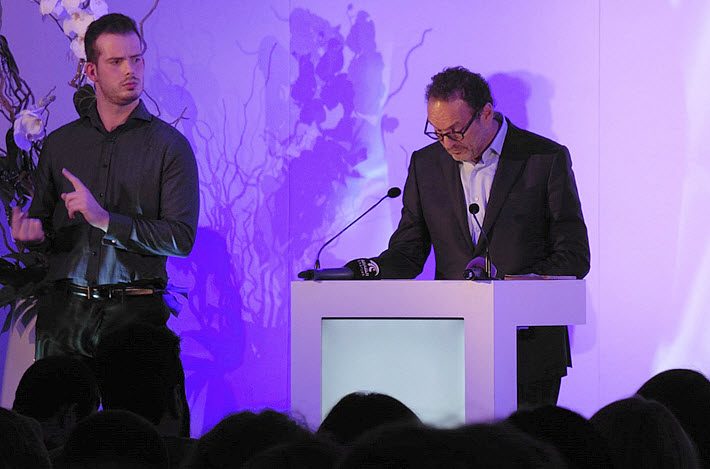 Luiz Schwarcz of Brazil’s Companhia das Letras speaks, an interpreter at his side, on receiving the London Book Fair Lifetime Achievement Award in 2017. Image: Porter Anderson

‘A Pioneer and an Inspiration’

It has been announced today (March 14) that London Book Fair will present its 2018 Lifetime Achievement Award to Sara Miller McCune, founding executive chair of SAGE Publishing.

The honor, voted on by the fair’s advisory board, will be conferred at the invitational International Excellence Awards on April 10 during the London Book Fair, at the Olympia complex. Miller is to speak the next day at the fair’s Research and Scholarly Publishing Forum.

In a prepared statement, Jacks Thomas, London Book Fair director, is quoted, saying, “Sara Miller McCune is a pioneer and an inspiration to those of us—perhaps especially women—in publishing. Her leadership and vision has helped SAGE grow, evolve and prosper over five decades, which is a monumental achievement. She has been at the forefront of so many changes in the sector; she is surely one of the greatest and most enduring publishing visionaries.” 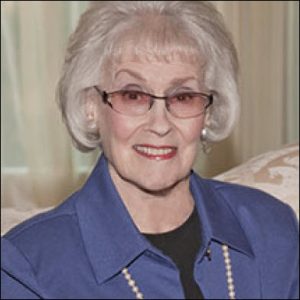 McCune was 24 when she founded SAGE in 1965, and she’d go on to establish offices in the UK  (1971), India (1981) and Singapore (2006). She’s also a philanthropist, the co-founding president of the McCune Foundation. In 2007, McCune established the Miller-McCune Center for Research, Media and Public Policy, which launched the magazine Pacific Standard. In 2017, the magazine and the center’s work became part of the Social Justice Foundation, a nonprofit organization that works with scientific research supported by SAGE Publishing.

In her own statement, McCune is quoted, thanking London Book Fair “for recognizing the critical work that an independent academic publisher can achieve when its commitment to a noble mission is unwavering.

“I am a passionate supporter of what I call the four justices,” McCune says: “economic, educational, environmental, and social, on an international scale, and I view the work of SAGE Publishing as pivotal to their advancement as we build bridges from ideas to usable knowledge. I receive this award as acknowledgment of my pledge to this work and an endorsement to continue to improve the world of scholarship and education for the long-term future.” 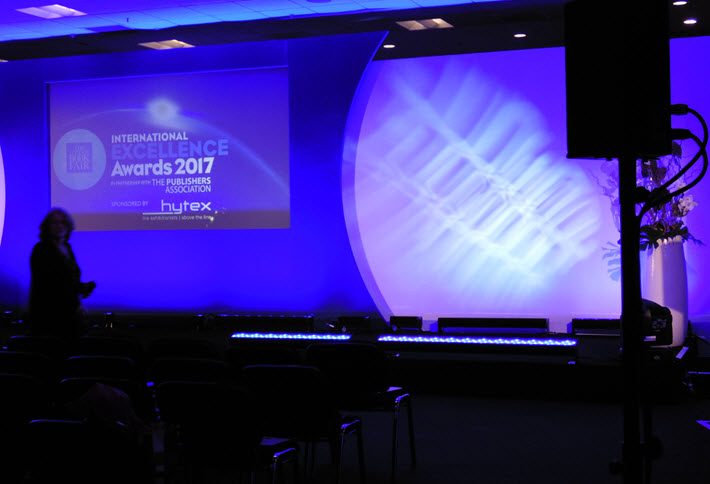 The hall is readied for the 2017 International Excellence Awards at London’s Olympia. Image: Porter Anderson

On the same evening, April 10, the International Excellence Awards produced by the fair in partnership with the UK’s Publishers Association will present a slate of honors that sees a record 27 nations represented. Sponsored by Hytex, the program comprises 17 categories, each with its own jury. This year, an Audiobook Publisher Award is introduced, as is a Library of the Year honor.

“The impressive developments of the industry are illustrated by the fantastic achievements of all the nominees.”Jacks Thomas

Thomas, in a prepared statement on this part of the program, says the 27-country record in this year’s shortlisted candidates “highlights the growth, breadth and diversity of these awards and the global book industry showcased at the London Book Fair.

“The impressive developments of the industry are illustrated by the fantastic achievements of all the nominees–their determination and passion to bring books to a wider audience through their initiatives is inspiring.”

And speaking for the Publishers Association, its chief, Stephen Lotinga calls the roster “a brilliant shortlist that exemplifies the global nature of the publishing industry. It’s great to see audiobook publishers now represented with their own award and to see excellence across the industry highlighted and celebrated through these awards.”

Here are the shortlisted candidates:

Audiobook Publisher of the Year (new this year)

Bookstore of the Year, sponsored by Gardners

Library of the Year (new this year)

Eligible for entries from Market Focus Baltics only:

Inclusivity in Publishing, supported by Equip

Eligible for entries from China only:

The winners of several other awards will also be presented on the evening of April 10 including: The Simon Master’s Chairman Award, The Market Focus Baltics Cultural and Literary Initiative Award, The Association for Publishing Education (APE) Student Awards and The LBF Trailblazer Awards.

More of Publishing Perspectives’ coverage of London Book Fair is here. And more on awards is here.