Looking at her joyous illustrations, it’s easy to see why Elīna Brasliņa is a rising star in Latvian book publishing. We talk with her ahead of London Book Fair’s new emphasis on illustration–and the Baltics.

‘Publishers Tell Me To Surprise Them’

Latvian illustrator Elīna Brasliņa has an American dialect to her English. “As I’ve done more and more books, I’ve learned to tussle with publishers more. Somehow the British English I was taught at school never stuck.”

At 30, this artist has an impressive 20 or so Latvian book covers to her name, and she’s had numerous exhibitions of her work. She’s a two-time winner of the Zelta Ābele Award for Book Design (2014 and 2015), and a recipient of the Jānis Baltvilks Baltic Sea Region Award for last year.

And Brasliņa, it turns out, is busy. She has illustrated around 20 books in the past six years in addition to her work as a production designer for an animated film, all while studying for a master’s degree in print-making and graphic arts.

Now she’s able to work as an illustrator full-time, and in so small a market as Latvia, she says, she and her colleagues in the business have to be prepared to work in many different styles in order to make a living.

“People say they can spot my work by looking for the red ears and red noses on the people I draw,” she says.

Red noses and ears, said by some to be a trademark in the work of Latvian illustrator illustrator Elīna Brasliņa

‘In a Small Market’

So far, the Art Detectives (published by Neputns) is probably the best-known part of her portfolio, a series of five illustrated titles used in the school system. These award-winning books by Luīze Pastore feature young detectives Theo and Button and their sausage-dog Comma, who together investigate the hidden secrets of artworks by some of the greatest Latvian artists.

“Luīze Pastore goes around doing these great creative writing workshops,” Brasliņa says, “which is great promotion for an illustrator. She’s a huge supporter of my work. I simply send her a sample” when looking to work with Pastore, “and she’s never critical.

“My first picture book [with the writer R. Briede] is about to come out now, titled The Dog Who Found Sorrow. I’m told they’ve already sold the rights to Korea and China.

‘I had never seen sorrows before but recognized them at once.’ Illustration with text by Elīna Brasliņa from ‘The Dog Who Found Sorrow’ by R. Briede

‘It Can Be Frustrating’

“I’ve also been very fortunate,” says Elīna Brasliņa, “to be hired to illustrate Italo Calvino’s Imaginary Cities (Neputns). It was a funny thing. I saw on Facebook that it was in the process of translation—and I just clicked Like and they contacted me.” 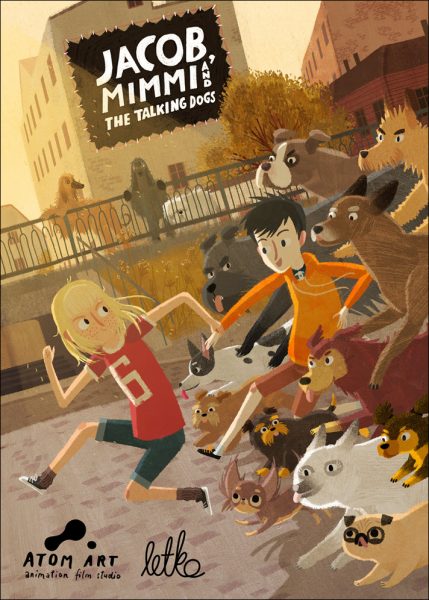 And the film work she’s doing is on a production called Jacob, Mimmi and the Talking Dogs with the Riga studio Atom Art.

Much has happened quickly for Brasliņa. Her international debut was her work for Kate Wakeling’s collection of poems, Moon Juice (The Emma Press). Since then she has illustrated books for a Brazilian and an Irish publisher: Cecilia and the Dragon (Callis) and  Bumpfzzle the Best on Planet Earth (Little Island Books). Both books are to be published soon.

“In a small market,” she says, “you can get quickly noticed but it can be frustrating because there’s so much competition from illustrators in countries like the UK. Publishers have no reason to commission you unless they can meet and get to know you.”

It has been said that as an illustrator Brasliņa has appeared out of the blue. “The students at the art academy mostly come either from the Janis Rozentāls Art High School,” she says, “or from the Riga School of Design and Art, which is also a high school, while I had only done two years of evening courses.

“Then again, my father is a painter and my mom is an art historian, and I’d always liked to draw, but my parents just never pushed me to go to art school. They thought I wouldn’t be able to make a living. In the end, I got there on my own. And once I realized that illustration could be both a passion and a livelihood, I just kept going.

“I got into illustration because my teacher introduced me to a publisher. He gave us a project at the academy to make our own small book, and mine actually ended up being published. So here I am.”

Brasliņa says she believes success is “mostly about finding great publishers who truly inspire you, letting you take risks and letting you do what you want with the texts. I’ve been fortunate to work with a lot of publishing houses that have given me a lot of leeway to do what I want. They tell me to surprise them.

“With some publishers, there’s feedback, and it’s like a collaboration, in that it goes back and forth. Other publishers say they’d like it in red and black, and I’ll have a tussle with them as I try to convince them to do red and green. No one wins. It’s usually a tie, because you can’t push them too far. In the end, we did a book in red and green and it was nominated for a design award.”

An illustration by Elīna Brasliņa

Authors, however, are very different from publishers, says Brasliņa.

“Luīze Pastore and I are on the same wavelength because we’re the same age. There’s an older author—I won’t mention his name—who would make tiny corrections to my work when I did the illustrations, which is annoying. I have never been asked to redo a whole set of illustrations.

“And there are plenty of authors who don’t seem to care about the illustrations in their book.”

Her ultimate goal, she says, is to publish her own book rather than keep illustrating the writings of other people.

“I want to write my own book, illustrate it, and find someone to publish it,” she says. “Because of all the commissioned work I’ve had, I haven’t yet had the chance to sit down and think about what my story is, but I want to get it out and introduce it to the world.”

In the meantime, she says, there’s plenty to keep her busy: to illustrate an Art Detective book in the style of Mark Rothko—if that’s even possible, she says—and a new feature film and her own animated shorts.

“You need to have a measure of success locally,” says Elīna Brasliņa, “to be promoted abroad and that can be hard to achieve if you’re not a full-time illustrator.”