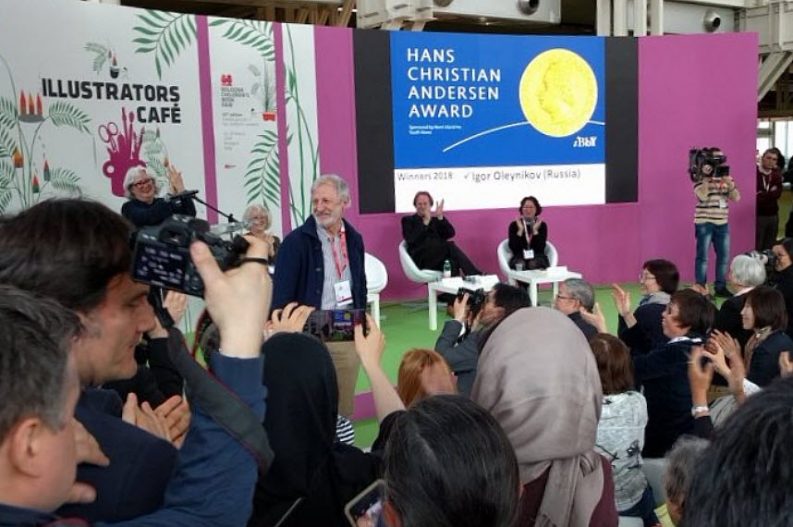 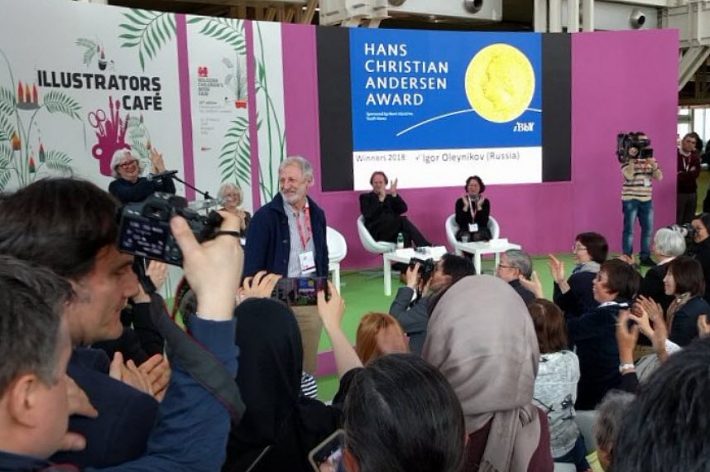 In front of a packed crowd at the center of the Bologna International Children’s Book Fair, the International Board on Books for Young People (IBBY) announced the winners of its Hans Christian Andersen Award. It’s one of the most prestigious international awards for children’s books and honors an author and an illustrator.

The 2018 winners are Igor Oleynikov (Russia) for illustration and Eiko Kadono (Japan) for writing.

The winners were announced by Patricia Aldana, this year’s jury chair and former publisher of Groundwood Books in Canada.

Aldana made a point of saying that the judging process had been positive and ”harmonious” among the 12 diverse jury members from 12 countries. She said she wished international discussions in politics could also be this constructive.

In choosing the winners from this year’s submissions, Aldana said that the jury looks for work that connects with children and takes a creative risk. Above all, she said, they look for stories and illustrations that inspire the “belief that these works should be available to children all over the world.”

“This exceptional illustrator can bring the page alive in a way that must be the envy of his peers,” wrote the jury in its award statement. “Though he claims not to like illustrating ‘cute’ children, he is more than capable of creating beauty — in his landscapes and in his characters. Beautiful or not, human or not, they burst with life, movement and expression.”

Japanese author Eiko Kadono has written picture books and novels. Her best-known book is Kiki’s Delivery Service, first published in 1985 in Japan. According to IBBY, she has published some 250 original works.

The jury statement said, “There is an ineffable charm, compassion, and élan in the work of this great Japanese author … Kadono’s books are always surprising, engaging, and empowering. And almost always fun. And always life affirming.”

The creation of this list came from the jury’s “desire to help build bridges of understanding and to expand access to the very best books.”

Aldana lamented “how many excellent authors have not been translated” as book markets put more emphasis on marketability and sales potential.

“Children are not a market,” she said. ”They are readers and they deserve the best.”