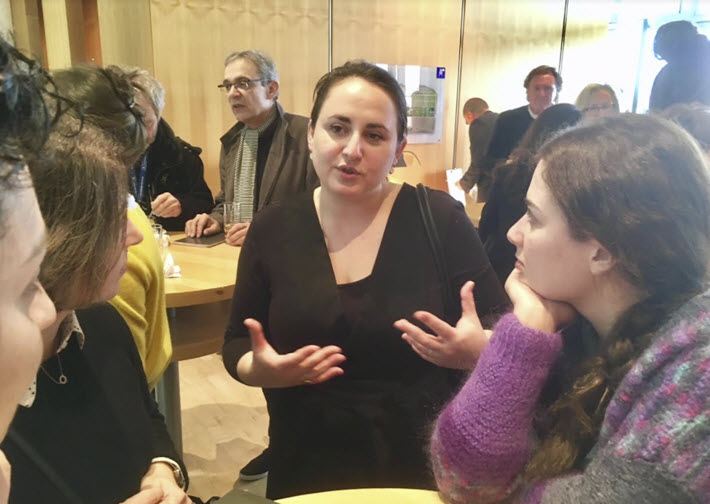 Georgia’s unique 33-character alphabet takes center stage in its 2018 Guest of Honor plans for the Frankfurter Buchmesse, as was detailed at a news conference at Leipzig Book Fair. 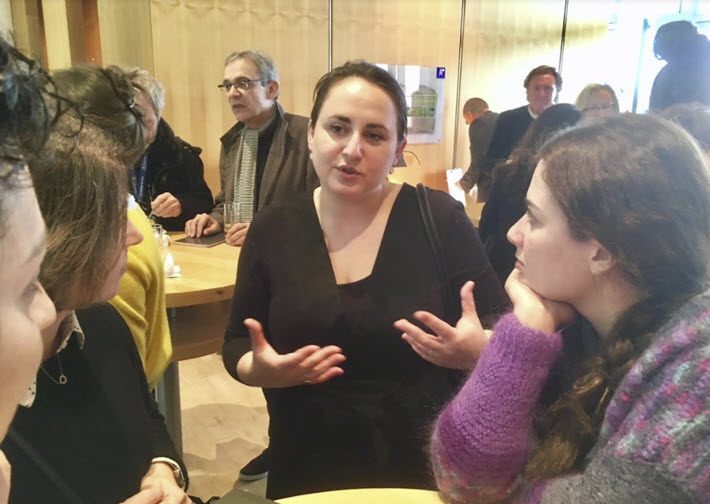 “What consolidates and unites all this,” according to the team preparing Georgia’s program as this year’s Frankfurter Buchmesse Guest of Honor, “is the Georgian writing system: 33 letters that have carried Georgia through so many centuries.”  The Tblisi team calls that alphabet “the main symbol of Georgia’s eternal essence”—which came to light at the program’s Liepzig Book Fair news conference. —Porter Anderson

‘At the Crossroads of Europe and Asia’

At a news conference today (March 15) at Leipzig Book Fair, Georgia has opened its programming as this year’s Guest of Honor at the Frankfurter Buchmesse (October 10-14).

And in comments made to the media, officials paid tribute to Georgia’s position as one of Europe’s oldest cultures, one that has a unique alphabet. “Leipzig is one of the oldest book fairs in the world and a perfect place to start the year,” said Medea Metrivelli, director of the Georgian National Book Center.

Juergen Boos, director of the Frankfurter Buchmesse, opened the news conference with several points about Georgia that challenge typical perceptions of the country.

Georgia is poised “at the crossroads of Europe and Asia,” Boos said. “It lies on the old trade routes between north and south, and has therefore been the center of centuries of continuous exchange. At the same time, a rich language and unique culture have also been preserved in the country, and these have inspired and shaped the identity of generations of writers.

“Georgia’s Guest of Honour presentation is accompanied by a large number of new publications, and here in Leipzig there will be a host of young literary talents to discover–talents who see themselves as being rooted in their country’s great tradition. I’m really looking forward to seeing which ‘characters’ will capture the imaginations of our visitors from around the world.”

The session in Leipzig provided an overview of key highlights in Georgia’s program, which is intended to raise the visibility of modern Georgia’s multi-ethnic culture and its history.

Author Nino Haratischwili, who has lived Germany since 2003, said that when she first arrived, she kept having to explain to people that Georgia is an independent country, not a US state or a part of Russia. She said she expects the Guest of Honor events at the Frankfurter Buchmesse to help put her country back on the map.

“Today,” Haratischwili said, “people in the West are more curious about their Eastern neighbors.” Culture and literature, she said, are an ideal way to encourage this interest, demonstrating that Georgia isn’t just a consumer of European culture but also an active contributor to it. 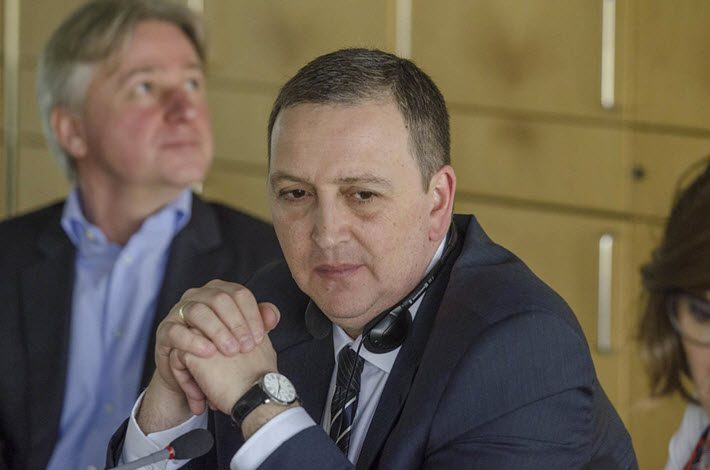 “Georgia lies on the old trade routes between north and south, and has therefore been the center of centuries of continuous exchange.”Juergen Boos

Mikheil Giorgadze, minister of culture and sport in Georgia, told the news conference that “Everything that makes Georgia unique is to be featured in the program,” referencing the country’s polyphonic choral mastery—a musical attribute recognized by UNESCO—along with wine-making traditions developed over millennia and a dynamic theater scene, often said to mirror the country’s contemporary affairs and mood.

Last year, Giorgadze said, Georgian citizens were granted visa-free travel to the European Union, opening up the frontiers of its historical European family. As Guest of Honor, Giorgadze said, he hopes to see these doorways open further. “It ‘s a unique opportunity,” he said, “to showcase our diverse culture and introduce the international community to our long-term publishing tradition and contemporary Georgian culture and writers.”

And in the coming months leading up to the Frankfurter Buchmesse, many recently translated titles and books written by Georgian writers abroad will be focused in events set in Germany, Switzerland and Austria.

All told, the road to Frankfurt will see as many as 450 events set in 29 German-speaking cities. The events include readings, performances, exhibitions, film screenings and seminars. Some of the highlights of the programme include:

The full program and many details and contextual  details on Georgia as Guest of Honor can be found on a special site for the program here. 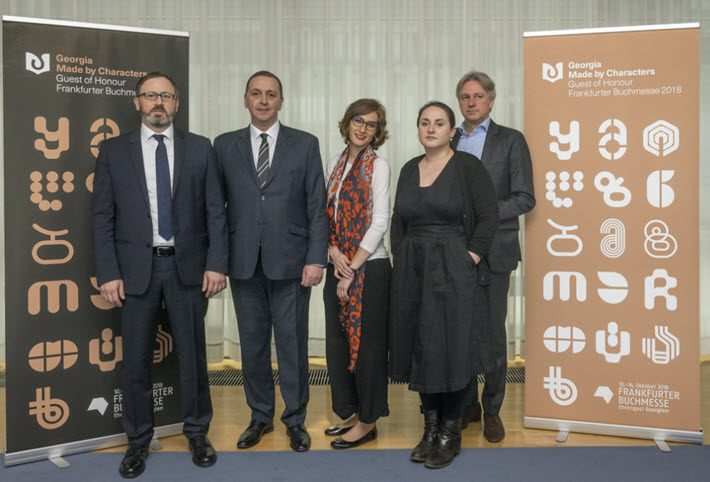 The ‘Made by Characters’ Theme

One of the biggest challenges for writers in Georgia is being able to make a living in a nation of fewer than 4 million people. She writes in German, then is translated into Georgian.Nino Haratischwili

Georgia’s written language, like its literature, can be traced back to at least the fifth century AD. As one of the oldest scripts in the world, Georgian is intrinsically connected to the soul of the country and has inspired the Guest of Honor slogan “Made by Characters.” As the program’s director from the National Book Center, Medea Metreveli, puts it, “These 33 letters have accompanied our culture through the centuries.”

Author Haratischwili suggested that the search for national identity has been character-forming, as well. Whether in novels, film, or music, after 70 years of Soviet isolation, the fight for Georgian identity has not been easy, she said. In the 25 years since the dissolution of the USSR, the arts have been a strong impetus behind the redefinition of the country’s identity.

While Haratischwili said she has observed a certain movement  toward nationalism since the Soviets era, she said she firmly believes this is not representative and only transitional. Today, a more balanced and mature sense of self is emerging, she said, talking of how Georgia has always been a melting pot of different cultures and hence, “Diversty and tolerance are engrained in our national identity.”

According to Haratischwili, one of the biggest challenges for writers in Georgia is being able to make a living. The country has fewer than 4 million inhabitants, so the market is very limited. The opportunity to have your works translated into other languages can be an essential gateway to a successful career. Haratischwili writes solely in German now, and her books are then translated into Georgian. One such case is her novel The Eighth Life, which should be released in Georgia in time for the Frankfurter Buchmesse.

While Haratischwili says she believes that Georgian literature has a unique character of its own, the most relevant and successful works address universal truths, she says, that cross cultural divides and help us see our common humanity.

If you’re at Leipzig Book Fair this weekend, you’ll find the Georgia National Book Center’s stand in Hall 4, No. D309.  Below is a promotional video produced by the Georgia Guest of Honor team for its Frankfurter Buchmesse program. More from Publishing Perspectives on the Frankfurter Buchmesse is here. And more on the Guest of Honor program is here.

David P. Steel is a American writer and entrepreneur who has been based in Germany since 1996. He is a language specialist and works in copywriting, copyediting, transcreation and, more recently, language technology.