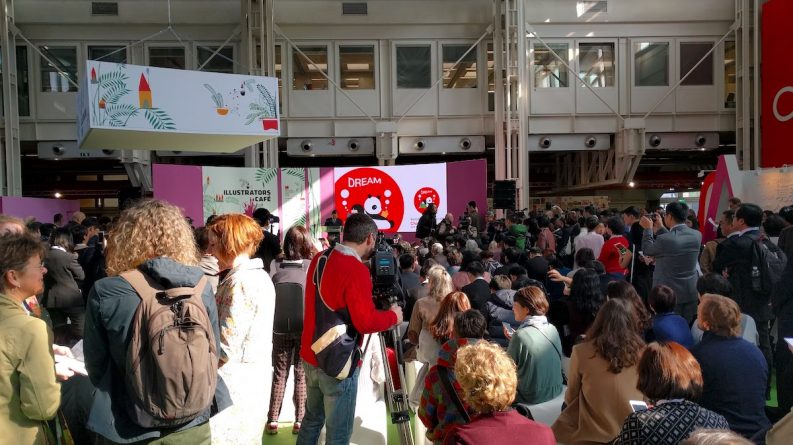 A preview of China’s Guest of Honor program at the 2018 Bologna Book Fair, where exhibitions and events will take place with the aim of increasing international cooperation. 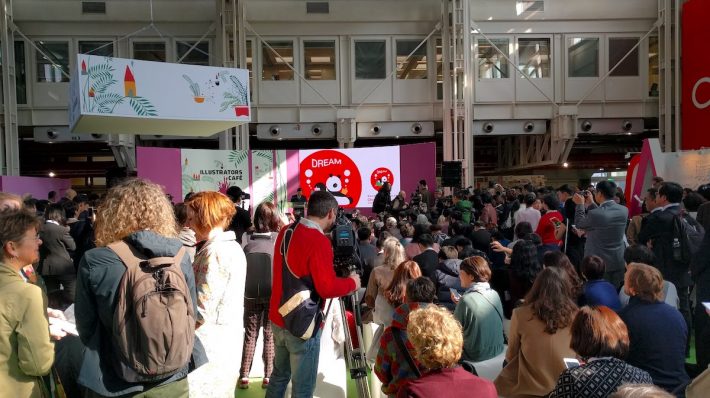 At the opening of China’s Guest of Honor program at the 2018 Bologna Book Fair. Image: Hannah Johnson

At the invitation of BolognaFiere Group in Italy, China will participate as the Guest of Honor in the 55th Bologna Children’s Book Fair, to be held from 26th to 29th March 2018.

Since China’s reform and opening up 40 years ago, the Chinese publishing industry has witnessed rapid development. The country’s children’s publishing industry has published on average 40,000 titles annually and maintained double-digit growth over the last decade. International exchanges have been active with numerous works emerging.

China’s Guest of Honor program in Bologna this year will be the largest foreign exchange activity in children’s book publishing that China has ever undertaken, and it will help promote the exchanges and mutual learning between Chinese publishers their international counterparts. A large number of children’s books from China will offer children and parents in different countries a better understanding of Chinese culture.

The logo for the activities of the Guest of Honor—with a Chinese girl reading in the company of a panda against a background in red—demonstrates China’s wishes to promote friendship through exchanges and development through cooperation. The theme “Dream” symbolizes the bright future and the dreams that reading can bring to children. Meanwhile, the design concept of the Guest of Honor exhibition draws inspiration from the image of a Chinese lantern. Surrounded by the atmosphere of ancient Chinese culture, the visitors will learn about the present as well as the past of children’s book publishing in China and listen to the great stories of today’s China.

Chinese Illustrations on the International Stage

The Bologna Children’s Book Fair is the international trendsetter in the field of children’s book illustrations. The events that China will host as the Guest of Honor will include: exhibitions of new and ancient Chinese illustrations, displays of Chinese picture books, and other exhibitions that will showcase the professional development of children’s book publishing in China.

At the Exhibition of Chinese Illustrations, covering an area of 300 square meters, visitors can see 150 works of illustration and books by 30 illustrators. The works were selected from nearly a thousand pieces, representing the best contemporary Chinese illustrations and accentuating both global charm as well as Chinese elements. “The Charm of Books from the East: An Exhibition of Ancient Chinese Illustration Art” will present 342 classical Chinese illustrations vividly illustrating the philosophy, culture, and lifestyles of the ancient Chinese. There will also be exhibitions of modern Chinese picture books and comic books.

Over 5,000 titles will be exhibited at the Guest of Honor stand in Pavilion 26, and the majority of which are original Chinese children’s books. Forty percent of the books will be displayed in their foreign language editions. The rest of the Chinese books exhibited will be attached with English synopsis.

The original Chinese children’s books to be presented include The Grass Hut, Bronze and Sunflower and the newly published The Bats by Cao Wenxuan, Jia Li in Junior High by Qin Wenjun, The Dark Flames by Gerileqimuge Heihe, The Beams in Green by Mei Zihan, The Ponytail by Hei Mi, Hua Mu Lan by Cai Gao, Flames by Zhu Chengliang, Liang Shan Bo and Zhu Ying Tai (The Butterfly Lovers) by Yu Hongcheng, Gui Bao the Wild—which has sold 10 million copies—and Celebrating a Grand Festival with Yi Yi—which has been reprinted several times.

International Exchanges between Chinese and Foreign Writers, Illustrators, and Publishers

Twenty-six Chinese writers, scholars and reading promoters including Cao Wenxuan, Han Yuhai, Xue Tao and 24 illustrators including Yu Chenghong, Xiong Liang, Hei Mi, Yu Rong, Zhu Chengliang will travel to Italy to take part in the book fair. They will join their Chinese and foreign colleagues and readers for face-to-face and in-depth discussions.

Events in Bologna will offer an opportunity for establishing cooperation between Chinese and foreign publishing organizations. The goal is to engage both sides in discussions, with the emphasis on strengthening the rights sales of Chinese content and establishing long-term cooperation.