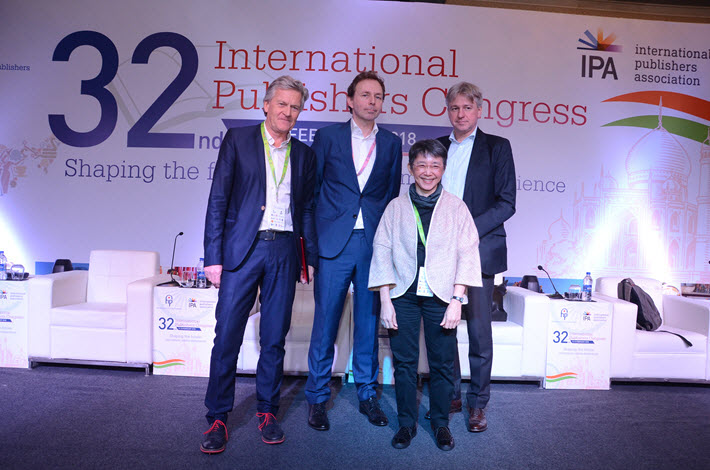 From the director of the Frankfurter Buchmesse to the founder of a Thai publishing house and a Norwegian publisher who was shot in Oslo: sharp cautionary remarks about self-censorship and its dangers. 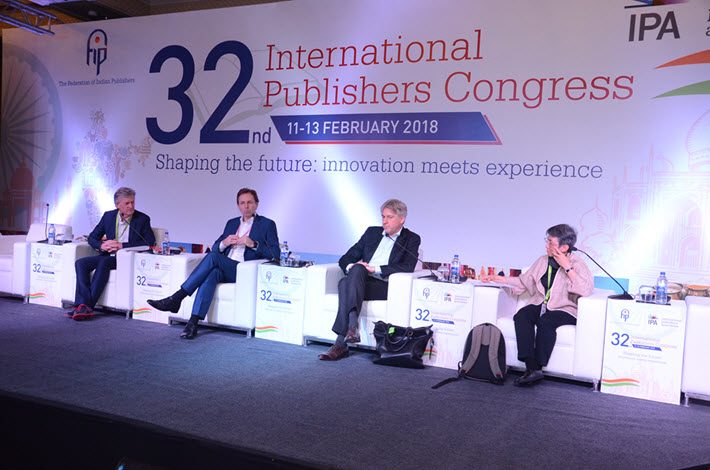 From left, Kristenn Einarsson, Mads Nygaard, Juergen Boos, and Trasvin Jittidecharak speak at the International Publishers Congress in New Delhi on the threat to publishing of self-censorship. Image: IPA

‘The Independence of Editorial Decisions’

If publishing and literature are going to be able to help “create and maintain free healthy societies” going forward, said Kristenn Einarsson, chair of the International Publishers Association‘s (IPA) Freedom To Publish committee, in New Delhi, “then publishers must have the will and the ability to challenge established thinking, preserve the history of our cultures, and to make room for critical opposition and challenging artistic expression.”

The IPA’s Freedom to Publish committee annually awards the Prix Voltaire to champions of the freedom to publish. And his comments laid the groundwork for what many delegates to the 32nd International Publishers Congress in India said is an alarming trend in the business today: self-censorship.

The world industry watched carefully last month as Macmillan’s Henry Holt and Company rushed up its publication of the book by journalist Michael Wolff, Fire and Fury: Inside the Trump White House, when Donald Trump attempted to intimidate the publisher with a cease-and-desist letter threatening legal action if the book, unflattering to Trump, was released. (More on that instance from our reporting is here.)

Macmillan CEO John Sargent defied the White House, calling the failed effort at suppression, “flagrantly unconstitutional.” The effort to stop publication was unapologetically brazen, and Macmillan wasn’t cowed. But in other instances, pressures on publishers, book fairs, authors and booksellers can be much subtler and can produce powerful inhibitions to free expression, as the session’s speakers told the congress.

“Freedom to publish means that publishers must be allowed to publish all that they deem worthy of publication—even and especially if those works challenge the boundaries established by society,” Einarsson said.

What happened to the sacred principle that company boards didn’t interfere in the editorial process? Asks William Nygaard in #freedomtopublish key note on #SelfCensorship @IntPublishers #IPAcongress2018 chaired by @KristennEinars1 pic.twitter.com/OXPvkX0Y99

William Nygaard: Self-Censorship is ‘Based on Fear’

“Self-censorship is based on fear. Fear of losing your job, of being passed over for promotion, fear of standing out…or of not being politically correct.”William Nygaard

Einarsson first handed off to a videotaped message from his countryman William Nygaard, chairman of the Norwegian Broadcasting Corporation and former chief of Norway’s second largest publishing house, Aschehoug. In 1993, Nygaard was shot three times outside his home in an attack believed to be linked to his 1989 publication of Salman Rushdie’s The Satanic Verses.

In his taped keynote comments from Oslo for this segment of the congress, Nygaard helped define for the audience what the sources of self-censorship can be. “Self-censorship is based on fear,” he said, “fear of losing your job, of being passed over for promotion, fear of standing out…or of not being politically correct.

“It is a fundamental task of this congress,” he said, “to strengthen our awareness of self-censorship.”

And then Nygaard pointed out one of the least comfortable elements of the discussion for many publishers in the audience: “What happened to the independence of editorial decisions?” he asked. Pressures for profitability, he said, in a publishing business that has come increasingly under corporate control in recent decades, has meant an erosion of free publication, as “more commercial thinking” has led to boardroom influence on editors’ decisions.

And so while political power—as is so relentless in Erdoğan’s Turkey, for example—may normally be the first thing we think of in terms of self-censorship and its dangers, Nygaard said, the threat of such “internal” impulses toward commercially-driven self-censorship can be extraordinarily potent. 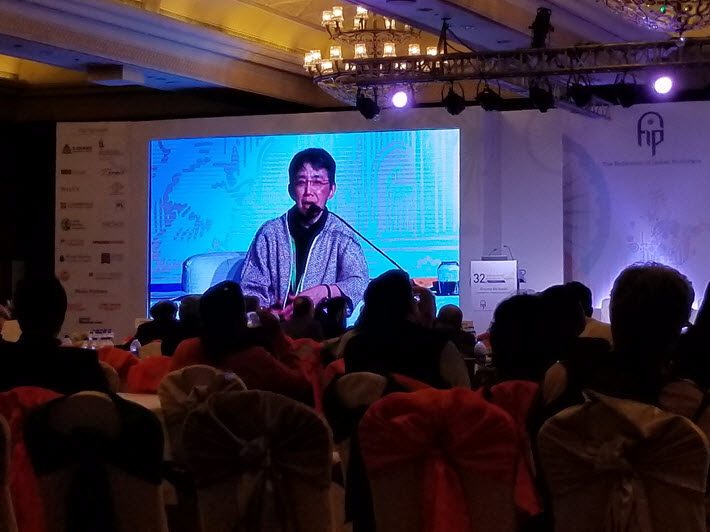 “When you grow up in a country like Thailand, you don’t know when it happens. It just happens that you use self-censorship all the time without noticing it.”Trasvin Jittidecharak

In contrast to the darkly evident problems of censorship imposed by openly punitive regimes, Thailand’s Trasvin Jittidecharak—a member of IPA’s Freedom To Publish committee and the founder of Silkworm Books—spoke movingly of how insidiously quiet, even gentle, the ways of self-censorship can become in many markets of the world.

“The question of self-censorship and how it arises is important,” Jittidecharak said, “because when you grow up in a country like Thailand, you don’t know when it happens” to you. “It just happens that you use self-censorship all the time without noticing it. Therefore, it’s so important for  you to check yourself, to ask, ‘Did I ask this of myself? Or did I ask my editor to do that?’ It becomes questions, every day, every week, when you deal with manuscripts.”

What she was describing is the requirement of energy, the stamina of continual self-awareness, testing and questioning how decisions are being made.

“Fortunately,” she said, she is helped in combatting self-censorship in Thailand by the fact that she publishes in English, “which is not read by many Thai people. And that’s really one of my own safeguards,” she said.

“When you have to question yourself and question everything, all the time … It suppresses your own creativity. It doesn’t allow critical thinking.”Trasvin Jittidecharak

“If I had the same topic, the same subject” in Thai as in an English work, “I’d probably get into trouble easily. But since it’s in English, the authorities and especially the military generals would never pick the book up. So I’m kind of safe in that sense.” But in the language of the regime, she said, the problem of self-censorship is badly compounded. “And this happens in Laos, in Myanmar, everywhere in Southeast Asia.”

Jittidecharak said that in exhanges with her colleagues on the Freedom To Publish committee about how handling sensitive topics in textbooks might be accomplished, she had described working to get important material in, hoping the authorities might not notice. “And that,” she pointed out, “of course, is a form of self-censorship.

“And yes, that’s true,” Jittidecharak said. “But the question is, do you want to survive? Do you want to be safe? Do you want to continue doing business? Being in prison, a publisher can’t do much. And if you stay outside of prison, you can do something, even though it’s not everything.” Compromises are frequent.

She told of a recent case in which she had to reject a manuscript because the risk to her business would have been too high if she’d gone forward with it. “And I was depressed,” she said, with a sense of weight that could be felt throughout the room. “When you have to question yourself and question everything, all the time,” she said with quiet, poised resignation, “it’s not fun. It’s not fun. It suppresses your own creativity. It doesn’t allow critical thinking. It’s not fun.” 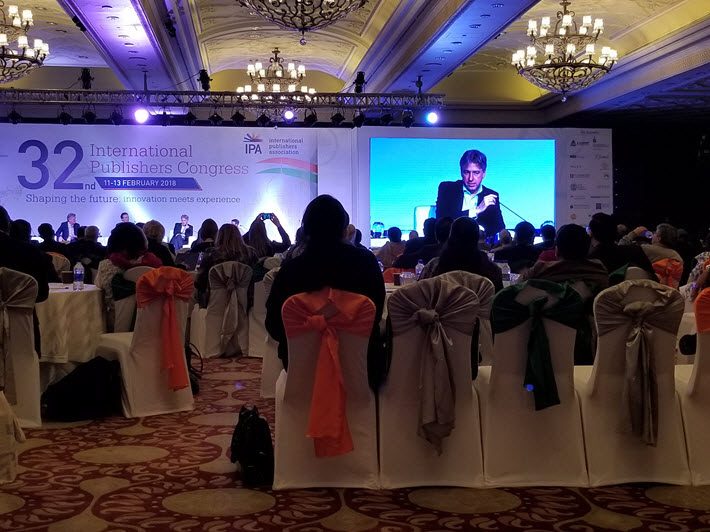 Juergen Boos: ‘Freedom To Publish Is Our DNA’

Frankfurter Buchmesse director Juergen Boos also had compelling commentary to offer, his from the standpoint of world trade shows and book fairs. He began by pointing out that Frankfurt has documentation on how in the 1400s, shortly after Gutenberg had done his work in setting up his printing press in Mainz, the first book fair activity was held in that city, at the time a great marketplace for manuscript trade.

“But this was the seat of the bishop,” Boos said, “and so the book fair could only stay there for a few years and then had to move to Frankfurt because of censorship by the church. So the book fair moved to Frankfurt and the emperor only showed up every third or fourth year. So between those years, you could do whatever you wanted to” in literature.

“And so the freedom to publish is in the DNA, it’s been the backbone,” of book fairs and of publishing itself, for centuries.

In the 1960s and 1970s, Boos said, there were “a lot of discussions and a lot of demonstrations” around the political impact of books, of course. And if there was a quieter period after that, “I’ve seen in the last 25 years,” he said, “these issues coming back to book fairs.”

Boos referred to last September’s difficult situation at the Göteborg Book Fair in Sweden where, as Publishing Perspectives reported, Maria Källsson, the fair’s director, came under intense pressure because of the fair’s decision to accept the right-wing extremist weekly newspaper Nya Tider (New Times) among its exhibitors.

As Källsson described the question she faced, “How are we to tolerantly deal with intolerance?” She was beset with demands that the rightist exhibitor be banned, but defended inclusivity—and the freedom to publish—as something fundamental to a book fair. Boycotts and parallel programming to address these issues to the fair were among the responses.

“Maria Källsson,” Boos said, “stepped down because she couldn’t stand it anymore, being in the public eye and being asked to keep somebody from a book fair”—a concept that’s anathema to the essential universality of literature and its events.

“We had the same situation last autumn in Frankfurt,” Boos told the congress delegates. “Of more than 7,500 publishers, we had four right-wing publishers from Germany. And some people told us that we should exclude those people.”

Boos made it clear that he wasn’t going to give in to the pressure to exclude these exhibitors: “This, you can never do. As I said, our DNA, our backbone, is the freedom to publish. And even if we don’t like these opinions, even if we don’t like these books, we cannot exclude them. We cannot exclude anybody from the book fair who’s not [breaking] the law of Germany. So we have to have these people. And a book fair has to be political.”

Books are political by nature, he told the congress, “And so we’ll always have these situations,” he said, recalling that in the past, Frankfurt has seen issues between Turkish and Kurdish exhibitors and this year may see issues between Russian and Georgian interests, with Georgia as the upcoming fair’s Guest of Honor, October 10-14.

“Two-hundred thousand book professionals come in” to the Frankfurter Buchmesse each year, the largest book fair in the world. “It’s 150 nations,” he said. “And everybody has an opinion. And everybody wants to speak about his opinion. Everybody wants to promote his books. And it is political. And we have to allow that.”

When asked by Einarsson how Boos sees trends in self-censorship today, Boos pointed to the rise of nationalistic governments in many parts of the world. As an example: in light of cases in which scholarly journals in China have been told not to make certain articles available, he said, it can be expected that those journal publishers would question themselves about what to publish in China in the future.

“I have a feeling,” Juergen Boos said, that pressures toward self-censorship “are getting worse.”

Mads Nygaard: ‘This Is Inspiration’

Boos’ viewpoint was staunchly ratified by Mads Nygaard, the son of William Nygaard, who has gone into publishing despite the assault on his father.

Although in Norway the right to publish freely is protected by law, he said, “as opposed to the situation in Thailand,” referring to Trasvin Jittidecharak’s comments, “the threat of self-censorship has grown” nevertheless, “and one of the reasons, obviously, is the threat of personal consequences.

“This is inspiration,” Mads Nygaard said.

More of Publishing Perspectives’ coverage of issues in the freedom to publish is here.