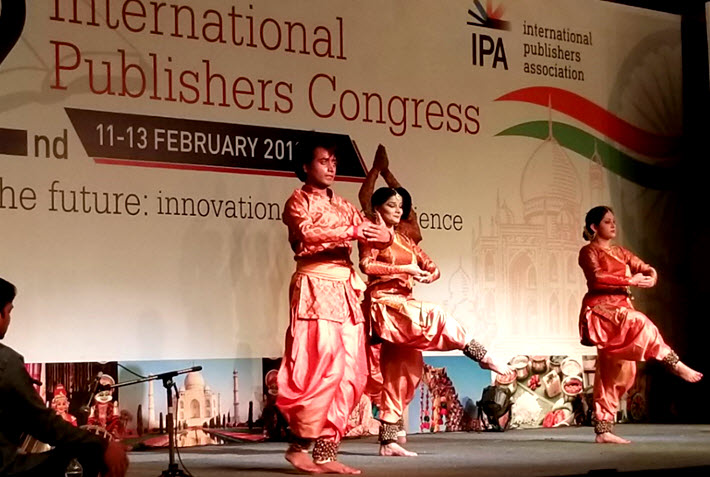 Amid strong programming on the freedom to publish and copyright concerns, the 32nd IPA congress in India mirrored world industry shortcomings in diversity challenges—and will go to Norway in 2020. 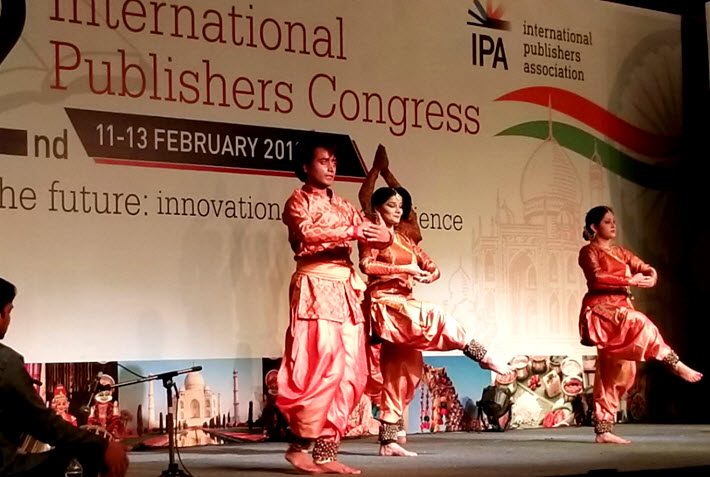 In the closing minutes of the 32nd congress of the International Publishers Association, it was announced on Tuesday (February 13) that Lillehammer will be the site of the next of these biennial gatherings of publishers from 60 nations.

Speaking in a video address to the 32nd congress of the IPA seated in New Dehli, the Norwegian minister of culture, Trine Skei Grande, told the group, “As a passionate reader, I’m looking forward to [this] cooperation with the publishing industry. We’re excited to welcome you all in 2020 to Lillehammer,” which is a UNESCO City of Literature.

IPA president Michiel Kolman told the assembly, “During our discussions [in Delhi]—although I could feel some tension around embracing technology and disruption—there was also an exhilarating confidence about our future direction. So, let’s get on the road to Lillehammer and work together to disrupt the disruptors.”

“Although I could feel some tension around embracing technology and disruption—there was also an exhilarating confidence about our future direction.”Michiel Kolman

Ironically, it may be some of publishing’s own patterns and assumptions that most need disrupting.

Many delegates to New Delhi, both male and female, were worrying aloud by the third and final day about the majority-male representation onstage during the presentations and panels.

The Indian host market is one that includes many accomplished women as well as men, but most representatives of India’s huge, complex, and fast-developing market are male, at least as seen in the programming of the 32nd congress.

Notably missing from the stage, for example, were prominent female publishers Chiki Sarker, the great Urvashi Butalia, and Arpita Das, whose interview with Publishing Perspectives for Frankfurter Buchmesse included some of her thoughts on “the kind of masculinity we’ve created” and how this tends to mean “the CEO bracket is all men.”

Digital ‘disruption’ was discussed threadbare but the socio-behavioural impact of the consumption of digital content on kids and teens was somehow not highlighted much. Policy makers need 2keep it in mind for creating any ‘digital-as-panacea-for-all-ills’ policy #IPACongress2018 pic.twitter.com/5HPYSXieEP

The Challenge of a Congress

The IPA panel most extensively representative of women’s work in publishing was the one ably led by the UAE’s Bodour Al Qasimi, founding publisher of Sharjah’s Kalimat and patron of the Emirati Publishers Association. Sharjah, in fact, will be Guest of Honor at the New Delhi World Book Fair in 2019, it was announced as the IPA congress closed.

The session led by Bodour was focused on “Creating the Readers of the Future,” which of course means young readers, children’s books—the nurturing role to which women are so frequently assigned, even as Bodour, herself, is one of the premiere businesspeople in the Arab world. She chairs the Sharjah Investment and Development Authority, known as Shurooq, and that is not kids’ stuff.

“During this congress a compelling case was made for the value of publishing, highlighting our contribution to literacy, education, employment, the economy, and upholding of functioning democracies.”Hugo Setzer

Not until 2 p.m. on the first day of the congress could a woman of real publishing clout be seen onstage, when the Association of American Publishers‘ CEO Maria Pallante joined IPA’s Kolman and the  World Intellectual Property Organization‘s (WIPO) Francis Gurry on intellectual property issues.

In fact, on the third day, even “Strengthening Education Publishing Capacity” was all men—a panel in which we might expect the stereotypic lean into women and nurturing to recur with the educational theme.  If the stereotype was avoided, so were the voices of women working in educational publishing.

As the UK takes the lead in addressing not only gender inequities in publishing but also those of race, ethnicity, and sexuality, there may not be a national industry on Earth that doesn’t need to take a similarly hard look at its own issues in this regard and forthrightly, openly address them. Our publishers’ world body, the IPA, is well-positioned to provide leadership in this regard, much needed. And yet, none of all these guys on stage had the grace or presence of mind to say from the podium that more women should have been with them.

And so we take heart: the advances that women have made in publishing in the Nordic and Scandinavian industries may hold timely value for many national associations to learn from in 2020 when Oslo hosts everyone at Lillehammer.

Hugo Setzer, Mexico-based IPA vice president, was instrumental in some of the best elements of the Delhi congress, and he said, in a statement on Tuesday evening, “We’ve heard many times about the social and economic importance of our work and during this congress a compelling case was made for the value of publishing, highlighting our contribution to literacy, education, employment, the economy, and upholding of functioning democracies. I look forward to taking this message from India to Norway in 2020.” 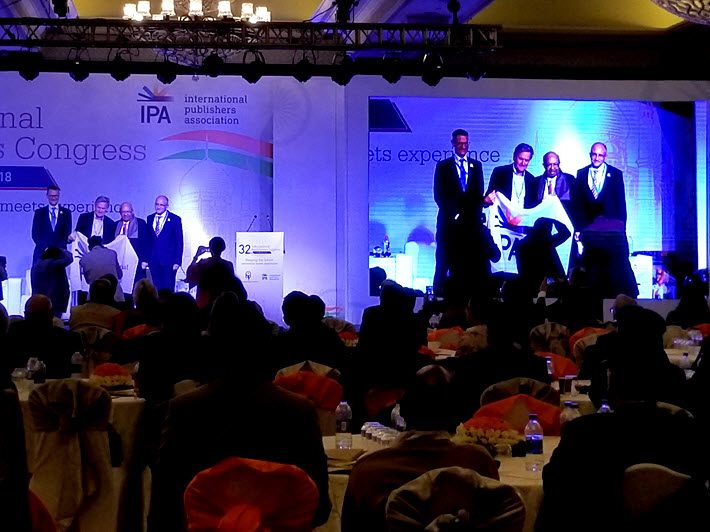 Passing the Flag to Norway: With Hope of More Diversity

Further commentary from the stage noted the special contributions to the program of both the IPA’s Freedom To Publish committee members and executive committee—as well as the host association, the Federation of Indian Publishers.

And yet, the congress ultimately made far less news than might have been anticipated, other than the instructive controversy around the Prix Voltaire (more on that in our report here).

The coming Norwegian congress is expected to coincide with events in Lillehammer’s City of Literature programming in the last week of May 2020, following  Norway’s Guest of Honor program at the Frankfurter Buchmesse in October 2019. The City of Literature context exists under UNESCO’s Creative Cities Network initiatives.

One of the former IPA presidents at Delhi was Ana Maria Cabanellas of Argentina, a woman who told Publishing Perspectives that this year’s program was her 12th biennial. At this iteration of the IPA’s progress, you could hear her and other veterans talking of the congresses of the past, much as they might discuss chapters in a book.

And in coming editions of Publishing Perspectives, we’ll have chances to look at specific sessions and presentations, to capture more of what was said in this genial, professional crowd of publishing players.

In every case of a world congress, the lion’s share of the presentation work will always fall on the host association—including the procurement of sponsorship for many elements of a gathering for hundreds of delegates. Opinions about programing need not dim our appreciation for the hosting publishers’ association’s hard work, in this instance, the tirelessly committed Federation of Indian Publishers. They deserve the thanks and applause offered at the close of the congress.

But getting it all in, local and international—urbi et orbi, as the Vatican would have it—is easy for nobody.

The New Delhi congress hosts were gracious and diligent in staging their industry’s congress for the international membership.

We simply have to keep asking for more: more respresentation of the entire, multi-colored and -gendered spectrum of the many professionals working in–and for–book publishing today. 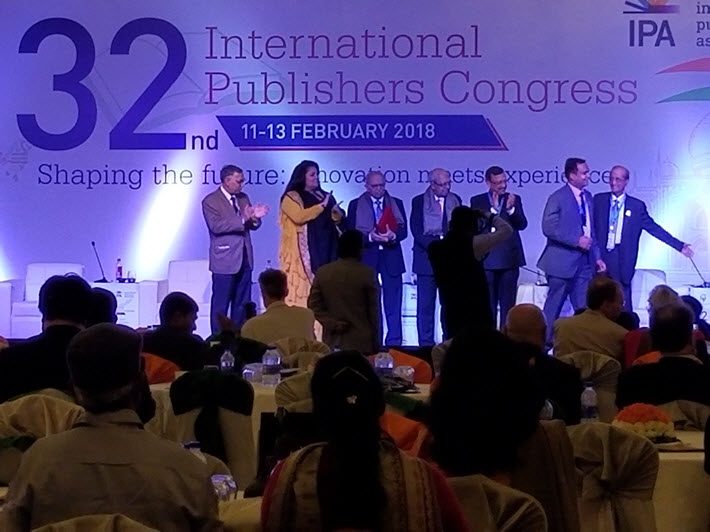 Organizers and sponsors of the IPA’s 32nd International Publishers Congress are thanked onstage at the close of the event in New Delhi, six men and one woman. Image: Porter Anderson