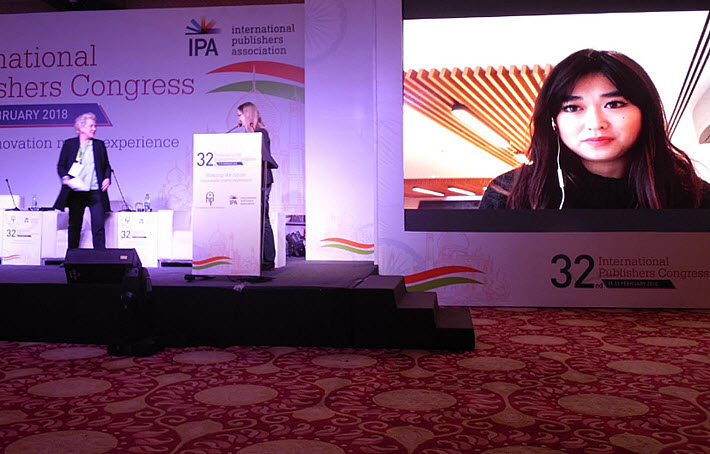 Gui Minhai, a publisher who disappeared in China earlier this year, has said in a videotaped interview—which critics say is forced—that he does not want the Prix Voltaire. His daughter denies that this is his actual feeling. 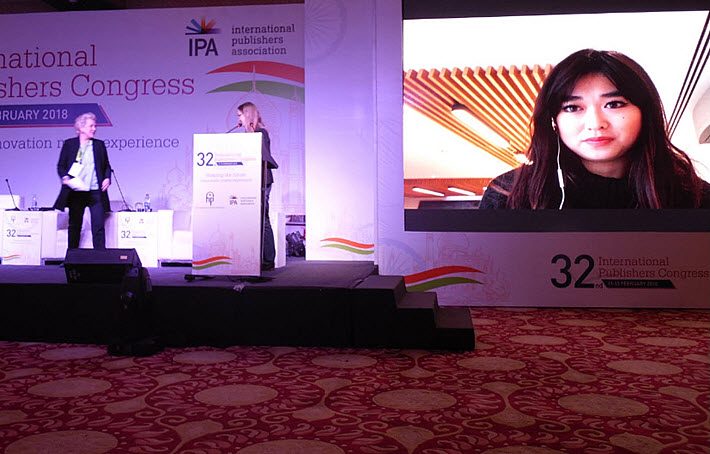 It fell to the daughter of Gui Minhai, the Swedish publisher and bookseller detained in China in January, to ask a question Sunday (January 11) that has dogged the International Publishers Association (IPA) for more than two years:

“Why is the Chinese Publishers Association allowed to be part of the IPA? How is this defensible?” Angela Gui asked a hushed gathering of IPA delegates in a Skype transmission from her home in the UK on the first day of the IPA’s 32nd International Publishers Congress seated in New Delhi.

In a full day of issues and insights, the interview with Gui’s poised, articulate daughter was easily the most compelling part of the day, coming in a session which asked “Do Awards and Recognitions Help?” in cases in which defenders of the freedom to publish are granted the IPA’s Prix Voltaire and other humanitarian awards.

The session’s chair, Jessica Sänger, director for European and international affairs with the German Publishers and Booksellers Association, had asked Angela Gui if—on the eve of formally confirming her father as the honoree of the 2018 Prix Voltaire—there might be more ways the IPA’s 60-nation membership could support Minhai in his plight.

“I’m unsure how to proceed in my own advocacy efforts. And of course, I think using the channels that are available to the IPA to exert pressure is very important.”Angela Gui

“Is there anything we should be doing to support you,” Sänger asked, “in your campaign to hopefully improve his situation and finally be released?”

Angela Gui answered without rancor, choosing her words thoughtfully. “In terms of what can be done to help, that’s a very difficult question because there’s certainly no information [about her father’s current situation]. I’m unsure how to proceed in my own advocacy efforts. And of course, I think using the channels that are available to the IPA to exert pressure is very important.”

And this is when she asked about the membership of the Chinese association. “Why is the Chinese Publishers Association allowed to be part of the IPA? How is this defensible?”

Sänger confirmed in response, “This is a very important question that has been under discussion for a long time.”

And indeed, the IPA has honored the membership of its Chinese colleagues, even after special discussions at the 31st congress in London in 2016, in accordance with universally recognized diplomatic understandings that dialogue is better than distance, whenever possible, a better the response to tension.

But one reason the question was highlighted in New Delhi was that the case of Gui’s father had taken another baffling turn in world news coverage. 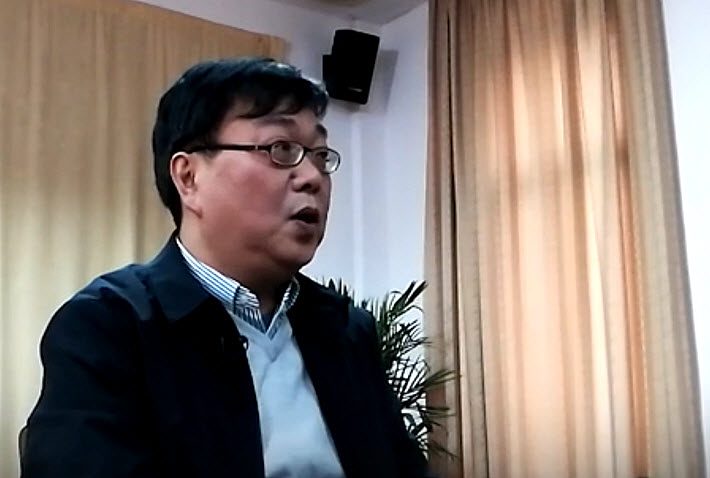 “I don’t think there can be any reasonable doubt that everything [Gui Minhai] said in this so-called interview was scripted by the people who are holding him, especially in terms of what he said about the Prix Voltaire.”Angela Gui

As regular readers of Publishing Perspectives know, Gui Minhai, the China-born naturalized Swedish publisher, was abducted from a Beijing-bound train on January 20 while he was accompanied by two Swedish consular officials. Strident denunciations of the move have come from Stockholm, Washington, and Brussels, but to no avail.

And on Friday, as many IPA congress delegates were making their way to India, Gui appeared in what appears to be a videotaped interview arranged by Chinese police in which, as Chris Buckley writes at The New York Times, Gui declares that “he wants no help from the outside world.”

There is a translated and transcribed excerpt from the video appearance posted by the South China Morning Post. The Post had a reporter among the Hong Kong and Chinese journalists present.

During the course of that videotaped appearance, a relatively healthy looking and energetic Gui is asked this question: “The International Publishers Association recently gave you the Prix Voltaire award (honoring a person or organization judged to have made a significant contribution to the defense and promotion of freedom to publish in the world). Do you want to go to personally accept the award?”

Gui answers, “Has it been announced? I didn’t know about this. In 2017, I was nominated for this. But I did not win. It was strange that I was given this Prix Voltaire now…I do not want to receive, and will not receive, this award. Otherwise, I would be so silly to be manipulated. I hope the International Publishers Association can respect my will.”

As Buckley writes in his Times coverage, Gui’s appearance in the tape “immediately drew skepticism from human rights activists, who said it bore the hallmarks of a staged confession under duress.”

The comments Gui makes are indeed suspect, as he paints a picture of having been duped by Swedish officials, possibly for political purposes in a Swedish election year.

The Role of the Prix Voltaire

Angela Gui told the IPA congress in her remote appearance in New Delhi, “I don’t think there can be any reasonable doubt that everything he said in this so-called interview was scripted by the people who are holding him, especially in terms of what he said about the Prix Voltaire. I know for a fact that that’s not his genuine wish, in addition to the other questionable statements he made.”

Gui reports that her father did know that he was shortlisted for the Prix Voltaire last year, “and he was very happy about that.”

“In terms of the impact of this prize, I think that’s a difficult and important question. It’s always difficult to speculate. One of the most significant features of Chinese law enforcement is that it’s increasingly opaque. Whether [the Prix Voltaire] will have any direct influence is hard to say.

“However, I will say that in my experience from him being awarded other prizes in the past, I think a prize, especially such a significant one as this certainly helps in terms of public opinion and helps legitimize my father’s work.”

Two years ago when the IPA had its congress at London Book Fair, the question of China’s membership came to a head, and an extraordinary session was called to address the matter. As then-president Richard Charkin said at the time, the Chinese association “was elected democratically to membership in the IPA” and “the Publishers Association of China is a very important part of the global publishing environment: in China as in many other countries there are big challenges and IPA works with all our members to help them overcome these.”

And while most would recognize readily the concept that inclusion and communication should offer the best chances of developing shared understandings, the situation has never been a comfortable one for many national associations’ members.

To date, there has been no comment from the Publishers Association of China about the Gui Minhai affair. 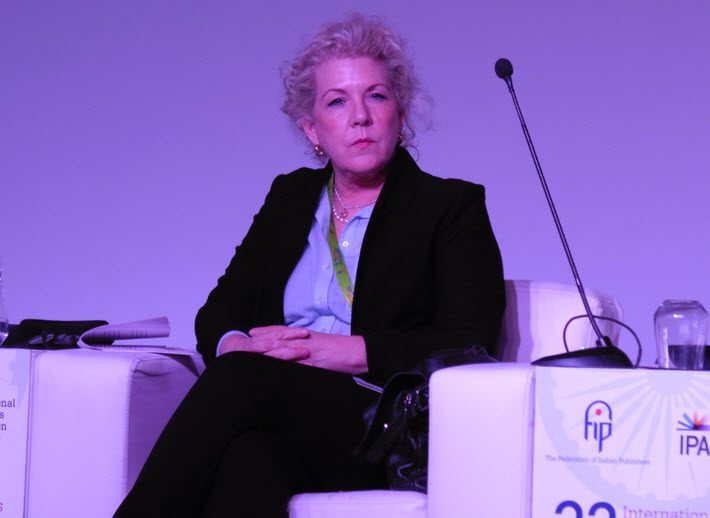 “Humanity is both wanting and bereft without the full and free expression of women’s creativity and knowledge.”Jennifer Clement

Despite the immediacy of the IPA’s Prix Voltaire’s sudden appearance in world news reports on the Gui Minhai story, PEN International’s Jennifer Clement of Mexico and Turkey’s 2017 Prix Voltaire laureates Cavit Nacitarhan and Elif Günay (for Turhan Günay) spoke with clarity about issues around the issues of the freedom to publish and awarding its champions.

Clement spoke of PEN’s own focus on threatened writers for close to a century and the importance of its Oxfam Novib/PEN award which in some cases “can act as a shield as if recognition is a sanctuary.”

Clement praised the IPA’s Freedom To Publish committee for its selection of Gui Minhai as its Prix Voltaire recipient, but added that the shield effect of such prize recognition “does not always work.” She pointed to last year’s honorees and noted that there seems to be no sheild for free-expression defenders in Turkey’s Erdoğan regime.

This was confirmed by Günay, who reminded us that there still are more than 150 writers and publishers jailed in Turkey, and by Nacitarhan who, speaking through a translator, said that awards like the Prix Voltaire “help to raise the plight of oppressed” members of the industry to public view and also go a long way to “strengthen solidarity” among publishers in Turkey.

Clement, for her part, was also eloquent in her appeal for attention to the plight of women, as well, particularly in the inequities with which their published work may be publicized and reviewed.

On the broader plane, she said, “India’s economic survey, released on January 30,” she said, “claims that more than 63 million women are missing across India, and more than 21 million are unwanted by their families.” She cited the report’s conclusion that “India must confront its societal preference for boys.”

She concluded by reminding the delegates that PEN’s own manifesto on women concludes, “Humanity is both wanting and bereft without the full and free expression of women’s creativity and knowledge.”

In many ways, the gracious, sorrowful commentary of Angela Gui had amply proved her point. 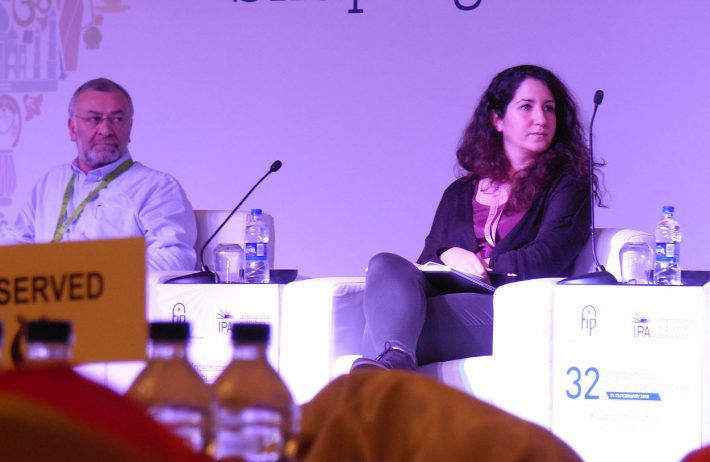