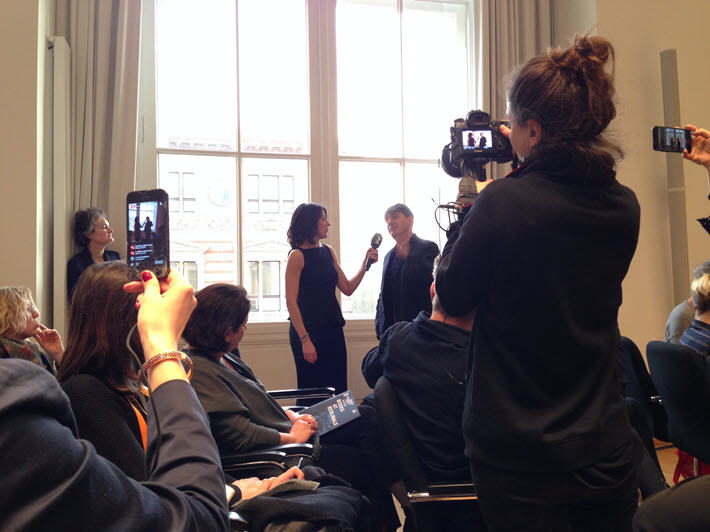 Books at Berlinale each year tempts film producers with 12 books carefully curated for their film adaptation potential—as the demand for screen rights soars in the age of Netflix, Amazon Studios, HBO, and others. 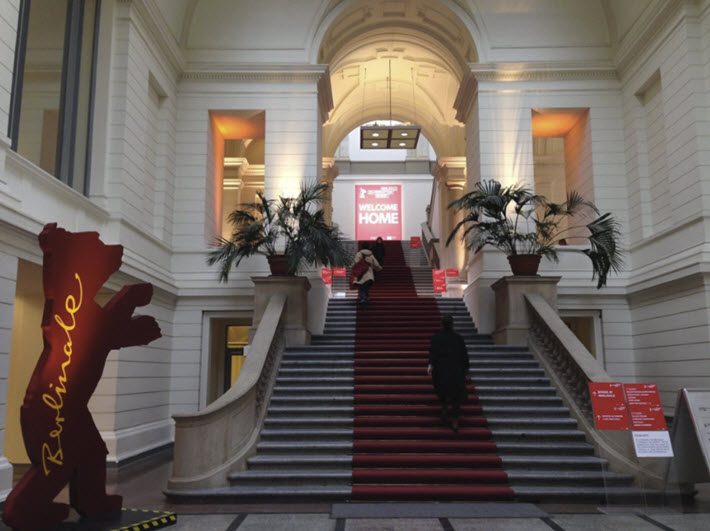 On the red carpet to cinematic potential: Inside the Abgeordnetenhaus, site of the Books at Berlinale event. Image: Julia Biermann

Outside the parliament building in Berlin, the Abgeordnetenhaus, that red bear—the famous mascot of the Berlin International Film Festival—marked the start of the Books at Berlinale program on February 19.

Organized in cooperation with the Frankfurter Buchmesse, Books at Berlinale brought rights holders to 12 books from nine nations to compete for the attention of filmmakers, producers, agents, scouts, any of whose interest could lead to a screen adaptation and a chance at film development.

As Publishing Perspectives has reported, this year’s 13th presentation of Books at Berlinale selected 12 titles from a record 150+ books submitted from 30 countries. The following dozen novels were chosen (click to see rights information about these titles):

Moderator Syd Atlas set the tone for the afternoon in her opening remarks: “Magic is what happens when you open a book and get lost in a film.”

And according to literary agent Frank Kroll, who was at the event to pitch Fake Metal Jacket by German author Sven Recker, one part of that magic simply has to do with the coming together of these players in one spot: “It’s brilliant,” he told Publishing Perspectives, “because they’re impossible to get together otherwise.

“And this is such an impressive international literary program,” Kroll said. “Pitching something alongside a book by [Isabel] Allende is really quite an honor. I’ve also heard that the rate of realization isn’t too bad—and that, after all, is ultimately what it’s all about.” 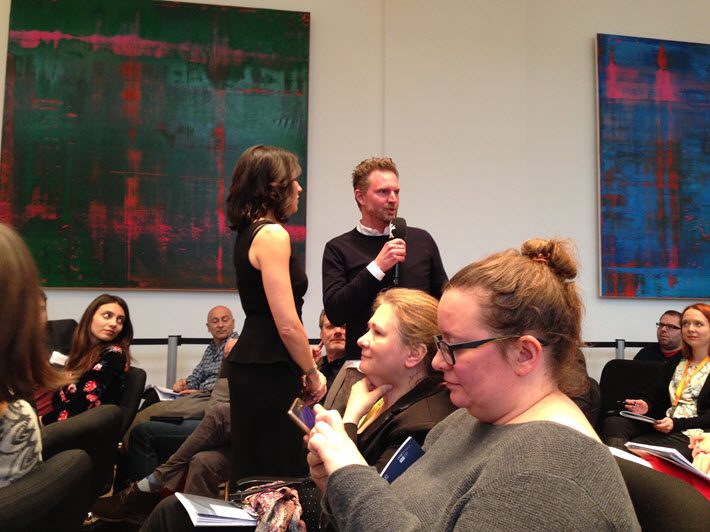 An Afternoon’s Pitches: ‘Bridges and Connections’ 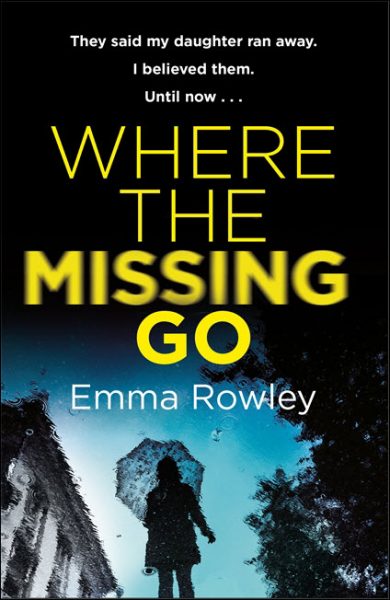 Since 2006, the program has been staged by the Berlin International Film Festival in cooperation with the Frankfurter Buchmesse as part of the Berlinale Co-Production Market.

In their shared introduction, Frankfurter Buchmesse director Juergen Boos and the film festival’s Dieter Kosslick write, “Many bridges and connections between the book and film industries have been built thanks to this cooperation. Publishers and literary agents from all over the world consider Books at Berlinale an important and prestigious place to introduce their upcoming or bestselling novels to the film world.”

Atlas’ job in moderating the program was to lead her pitching guests to quickly point at how each story’s plot and structure might work on-screen, something that’s easier for some properties than others.

One of the things that agent Laura Palomares of Literaria Carmen Balcells said she finds useful at the event is listening for what the filmmakers want. She was there to present Allende’s In the Midst of Winter to producers, but said, “I also want to be very attentive to see what feedback we get from the producers,” she said, “to learn what other books might be of interest to them.

“We represent the rights of thousands of works,” Palomares said, “and Books at Berlinale gives us a chance to directly ask producers what they’re looking for.”

Palomares also has a sharp understanding of why a film adaptation can be important, looking past the obvious financial advantages of options and contracts: “A film extends the life of a book,” she said, “and it allows its readers to experience its story, but captured in images. They’ll feel different emotions than they did when reading. And to those who haven’t read the novel, a film can introduce a good story, and the author behind it.

“The cinema creates readers and literature creates cinephiles. They are brother arts.” 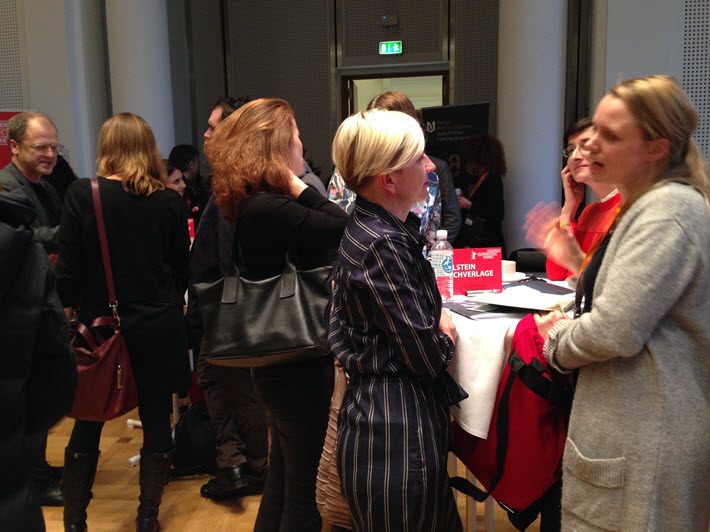 Networking between publishing players and filmmakers is a key element of the Books at Berlinale program. Image: Julia Biermann

Authors in the House: ‘Cultural Differences’ 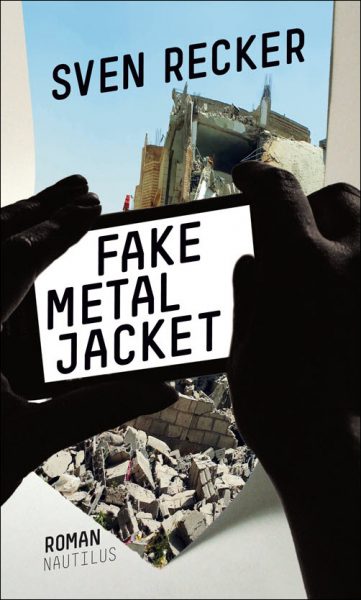 In the audience, the authors of two properties in play were following along intently.

Dato Turashvili is one of the best known writers in Georgia—which is Guest of Honor this year at the Frankfurter Buchmesse (October 10 to 14). Turashvili was following the presentation of his novel The Other Amsterdam. The book takes him to Amsterdam in search of the true story of his grandfather, who was imprisoned by the Nazis in the Netherlands during the Second World War. While in Amsterdam, he suddenly begins receiving letters from a mysterious woman.

Also on hand was Sven Recker, whose book Fake Metal Jacket is on the timely topic of fake news. And ironically, for all its contemporary relevance, Recker said he hadn’t considered the idea of the work as a film while writing it.

Turashvili’s publisher, Mikheil Tsikhelashvili, however, was quick to have seen such potential for his client’s book. “It has intriguing main characters,” he told Publishing Perspectives about The Other Amsterdam, “including the narrator. They can be developed in many directions. And the plot itself reflects the dynamic of a small country faced with both Nazi and Soviet regimes. It touches on cultural differences as well as historical events.”

Turkey’s Can Dündar was yet another honored guest for the afternoon. The journalist who spent three months in pre-trial detention in Turkey after publishing an article in the newspaper Cumhuriyet, watched the Kalem Agency’s pitch for The Girl in the Tree by Şebnem İşigüzel with special interest. The book looks at today’s struggle under the Erdoğan regime from the point of view of a 17-year-old who decides to go live in a remote tree because her country’s society isn’t doing anything for young people and women. (See our story today on observations from the Kalem Agency founder Nermin Mollaoğlu.)

Strong female characters were discussed in seven of the 12 books presented, clearly a topic in today’s literary dynamics as well as in much screen work. 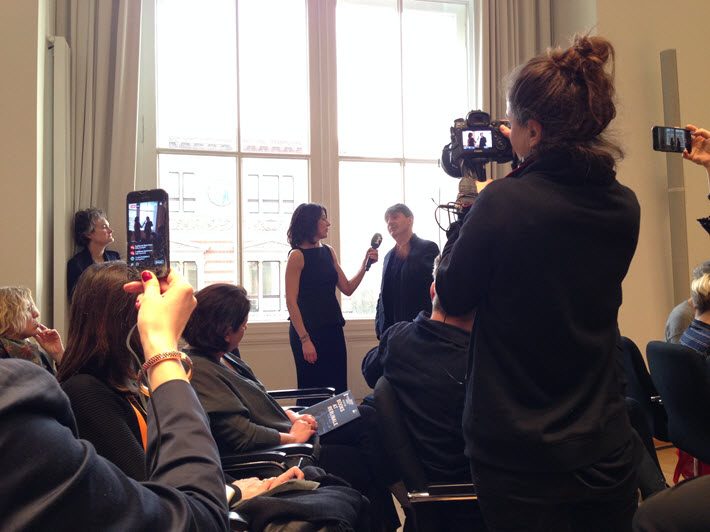 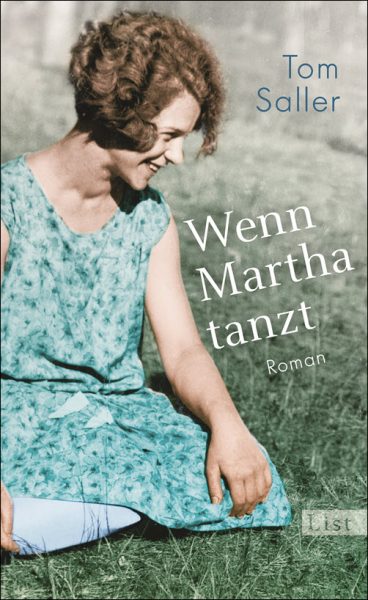 Leenastiina Kakko, an agent for Rights & Brands in Finland, told Publishing Perspectives that selling television and film rights “is becoming more and more important—think Netflix und HBO. The producers I’ve been speaking to,” she said, “are very hungry for books and series of books that can be adapted to the small screen.”

Anette Garpestad of Cappelen Damm Agency was there to pitch The Million Kroner Kindness Competition and said she believes Arnfinn Kolerud’s book connects with a wealth-fascinated era like this one. “The story and the questions it raises are universal,” she said.

“It’s about a boy and his mother who win big in the lottery, and the story follows the impact it has on them and the people around them. This could happen anywhere. It raises big questions about what money does to us, and the great divide between those who have it and those who don’t. I should also point out that it’s very funny, because the mother launches a competition to reward the kindest person in the village. This one is a good potential script for family entertainment.”

Many participants at this year’s Books at Berlinale mentioned the value of networking and making connections after the pitches—contacts that may prove useful in other projects. Over coffee and snacks, rights holders and film producers had a chance to talk and exchange business cards.

That personal contact is valuable, “even if it doesn’t result in a deal,” said Constanze Gölz, editorial director at Edel Books. “Connections have been made and the right contact persons identified for the future.”

And this was echoed by producer Patrick Mao Huang, managing director with Flash Forward Entertainment in Taiwan. “I’m looking for stories for the Chinese-speaking film market,” Huang said. “That’s why less culturally specific topics are appealing. Of today’s pitches, for example, I’m interested in The Million Kroner Kindness Competition by Arnfinn Kolerud and the thriller Where The Missing Go by Emma Rowley.” 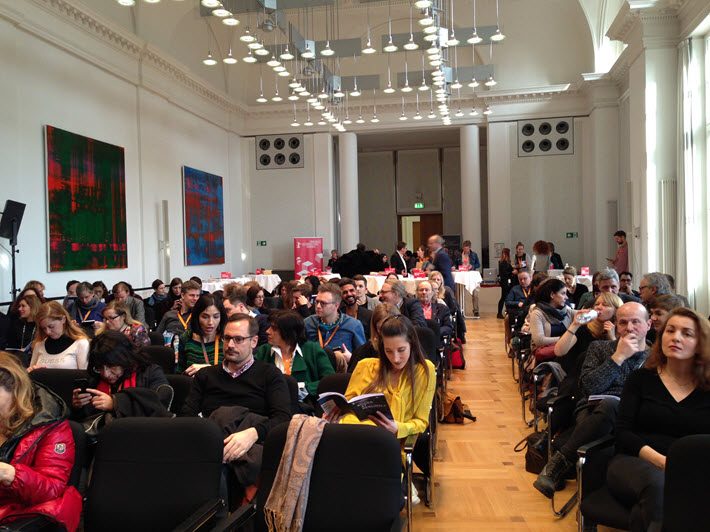 Rights Information on the 2018 Books at Berlinale Titles

Publishing Perspectives checked with the representatives of the 12 Books at Berlinale titles and collected available information on rights sales to date. In many cases, these are very newly published books without major sales action yet. Some however, reported good interest already. Here are the reports we have to date.

The Girl in the Tree by Şebnem İşigüzel was presented by Hazel Baydur of Istanbul’s Kalem Agency, and has just closed a deal with Random House for its German rights, according to Kalem’s Nermin Mollaoğlu. All other territories are available, she tells us, and an English translation should be available by May for those interested in the rights. (More on rights and Turkish literature is here.) 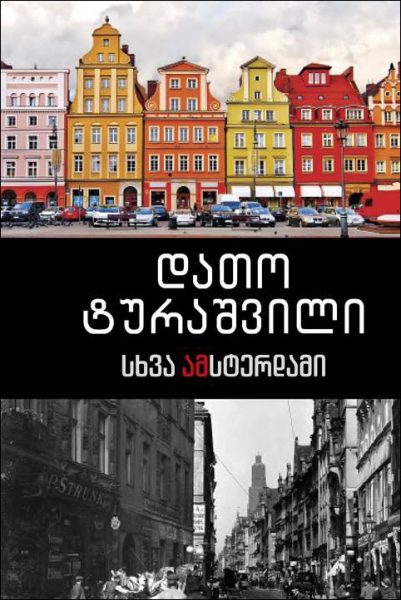 The Other Amsterdam by Georgia’s Dato Turashvili, Tsikhelashvili tells us, has already signed with Antares for the Armenian rights and publishers in Germany and The Netherlands are expected to close deals on Dutch and German rights within weeks.

Martha’s Dance is publishing March 9 and as yet all rights are available, according to Agnieszka Golosch at Ullstein Buchverlage.

Captain Horror’s Island, which is the first book of a planned trilogy, is an unusual case in that the book actually is being written and film rights are being pitched on the basis of a synopsis. Agent Periklis Douvitsas in Athens says he’s hoping for a simultaneous release of the book and film eventually, and the novel is expected to be finished during the summer.

The Million Kroner Kindness Competition, Garpestad says, has been out for about two months and has an initial print run in Norway of 3,300 copies. Work on rights sales has just begun and the book has been nominated for the Norwegian Ministry Prize and the Norwegian Critics Award. 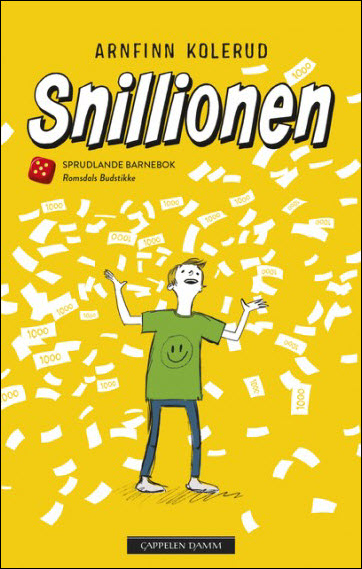 At Orion Publishing in the UK, Richard King tells us that Emma Rowley’s Where the Missing Go has all rights available at this point, and is being published in digital format first.  Readers of The Hollywood Reporter will know from Andy Lewis’ story, that Rowley’s book drew the highest adaptability rating from the magazine, ranking five bears, tied with Fake Metal Jacket.

Fake Metal Jacket is to be published within days, Kroll says, and all rights are available. It tied with Where the Missing Go in The Hollywood Reporter‘s adaptability ratings: five bears.

Hitler’s Feast by Rosella Postorino, according to Vicki Satlow in Milan, has sold into: 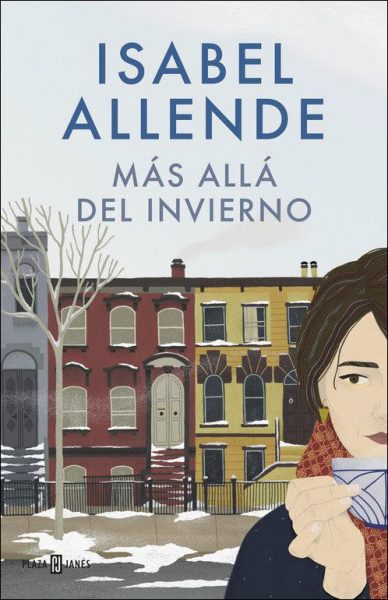 Allende’s ‘In the Midst of Winter,’ the Spanish cover

Isabel Allende’s In the Midst of Winter has been sold and/or published to date into the following languages and/or territories, Palomares tells us. And, as Scott Roxborough at The Hollywood Reporter notes, Allende’s The House of Spirits was made into a 1993 film with Meryl Streep, Winona Ryder, and Jeremy Irons.

So far, publications and contracts include: 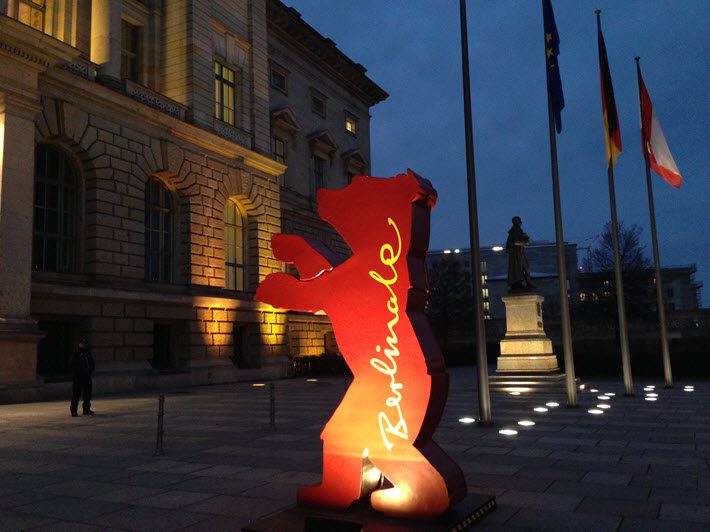 After Books at Berlinale on February 19 in Berlin. Image: Julia Biermann

More coverage of Books at Berlinale from Publishing Perspectives is here.