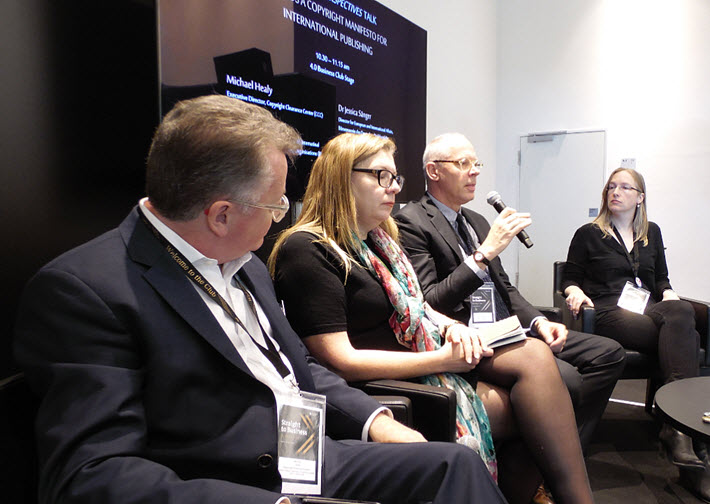 ‘We have no choice but to interpret this suit as the intimidating action that it is,’ says the leadership of the Association of Canadian Publishers in a statement on the lawsuit by almost 100 school boards and education ministries. 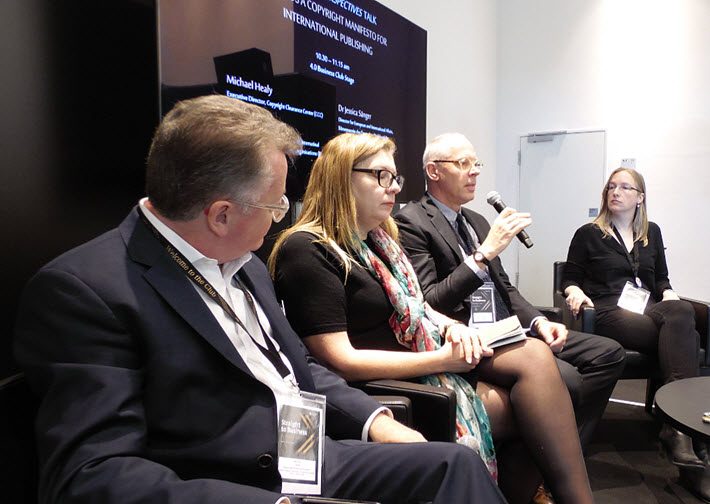 The Association of Canadian Publishers’ Glenn Rollans, holding mic, speaks about the Copyright Modernization Act during a Publishing Perspectives Talk at the Frankfurter Buchmesse on copyright threats in many parts of the world. From left are Copyright Clearance Center’s Michael Healy; Caroline Morgan, of the International Federation of Reproduction Rights Organizations; Rollans; and Jessica Sänger, Börsenverein des Deutschen Buchhandels. Image: Porter Anderson

In a newly released formal response today (February 28) to a lawsuit launched last week by some 94 ministries of education and school boards in Canada, the Association of Canadian Publishers (ACP) calls on those educational bodies to withdraw the suit and pay up on copyright tariffs long overdue.

As Publishing Perspectives has reported, even as a long-awaited five-year review of Canada’s 2012 Copyright Modernization Act goes forward, all the school boards in Ontario and the ministries of education for all Canadian provinces except British Columbia and Québec have filed a lawsuit against Access Copyright, the country’s English-language copyright licensing agency A parallel filing from British Columbia reportedly is also in play. (Québec has its own copyright collection agency, Copibec.)

The timing is a surprise not only because of the ongoing legislative five-year review—which could very well go against the school boards—but also because a federal court ruling in July in a case on similar questions around “fair dealing” copyright questions at the university level went emphatically against the position the ministries and school boards now are taking.

The new legal action is based in the K-12 education sector, although it’s said that in 2013, as the Copyright Modernization Act was implemented, universities led the way in using copyrighted content without payment. Canadian publishers have estimated they’re losing more than $50 million annually in copyright revenue.

In its statement, the association’s offices slam the court action brought by the education sector and urges “constructive solutions” to what is turning into an increasingly bitter standoff.

“The Association of Canadian Publishers,” the statement issued to the news media reads, “is alarmed by the legal actions launched last week by ministries of education for all provinces and territories (except Quebec, and in Ontario through the provinces’ school boards) against the Canadian Copyright Licensing Agency (Access Copyright) demanding repayment of more than CDN $25 million (more than US$20 million) collected under a legally certified tariff for the period of 2010 to 2012.

“ACP calls on the ministries and school boards to withdraw the suits, pay the tariffs certified by the Copyright Board for the copying of materials in K-12 schools for the period beginning in 2013, and bring Canadian K-12 schools back under licence.

“Ministries of Education (outside of Quebec) and Ontario school boards claim they are exempt from paying tariffs certified by the Copyright Board.

“As was made clear by the federal court of Canada in its July 2017 decision on Access Copyright vs. York University, tariffs certified by the Copyright Board are mandatory and enforceable; institutions—like the ministries of education and Ontario school boards—cannot ‘opt out’ and refuse to pay for the copies they make. In its decision the court determined that York’s copying policy—almost identical to the policy disseminated to K-12 schools after the amendment of the Copyright Act in 2012—was unfair.”

The prepared statement from the publishers includes a comment from the association’s executive director, Kate Edwards. is quoted, saying, “It is concerning that provincial governments continue to rely on copyright infringement as a substitute for fair payment for the hundreds of millions of pages copied annually in Canadian schools.

“Rather than pay a modest tariff certified by the Copyright Board, ministries of education and Ontario school boards continue to expose teachers across the country to copyright infringement. Teachers have now been placed in the middle of a legal dispute, despite trying to do the right thing when it comes to copyright.”

“As a founding member of Access Copyright, the ACP views this legal action launched against Access Copyright as a disturbing attack on Canadian publishers and Canadian creative workers.”Glenn Rollans

And the association’s president, Glenn Rollans—a publisher, himself, the co-principal owner of Brush Education in Alberta—points out in his quote that the publishers’ association is one of the organizaitons that helped create Access Copyright to handle tariff collection.

“As a founding member of Access Copyright,” Rollans says, “the ACP views this legal action launched against Access Copyright as a disturbing attack on Canadian publishers and Canadian creative workers.

“We have always been good partners in supporting Canadian curriculum with Canadian resources. We have no choice but to interpret this suit as the intimidating action that it is.

“While we have every confidence that Access Copyright will successfully represent our members’ position, creators, and publishers should not have to defend their livelihoods against their own governments.

“We call on the ministries and boards to reconsider this action, and to work toward constructive solutions that benefit both their students and Canada’s creative sector.”

More from Publishing Perpsectives on the new lawsuite by school boards and ministries of education in Canada is here. And more on Canada’s 2012 Copyright Modernization Act is here.