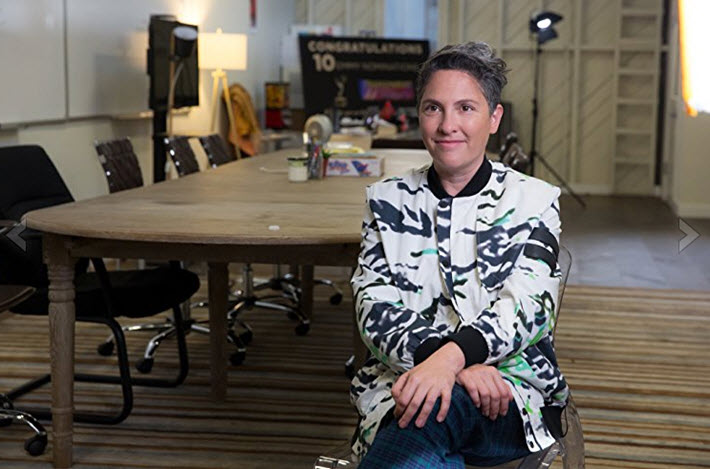 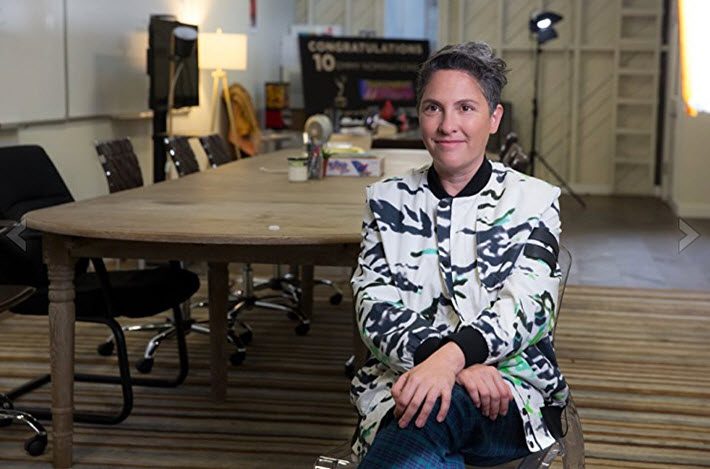 Jill Soloway is seen in this photo from the new documentary ‘Half the Picture‘ about the scarcity of women directors in Hollywood. Directed by Amy Adrion for Leocadia Films, the show had its release January 23 at the Sundance Film Festival. Image: Ashley Covington, Sundance Institute

Topple: Another Word for ‘Challenging Power’

The new imprint will focus on publishing “voices of women of color, gender non-conforming, lesbian, bisexual, transgender and queer writers,” according to an Amazon press release.

Soloway, the creator of two highly regarded Amazon Studios originals, Transparent and I Love Dick, has been making intelligent film and television since becoming an executive producer on Alan Ball’s Six Feet Under. Amazon’s ability to help enable Soloway’s eloquent mission–Soloway prefers to use the pronoun “they” rather than the gender-specific “her” or “she”–is an indication of the cross-media ingenuity that Amazon has developed: Topple is the name of Soloway’s three-year-old production company, and it gives this new diversity-devoted imprint a unique capacity to leverage the development of promising properties.

Topple has an exclusive arrangement with Amazon Studios, currently with eight television shows and four features in development.

“I can’t think of a more perfect collaborator than Amazon Publishing to make our dream of a revolutionary publishing imprint come true,” Soloway says—the term collaborator important here. The fillmmaker will work with Carmen Johnson, the editorial director of Little A—the literary imprint of APub—to select titles in what Soloway calls in a prepared statement, “a complicated, messy world where every day we have to proactively re-center our own experiences by challenging power.”

In Topple’s statement on the recent controversies around sexual abuse especially in Hollywood, the company asserts that, “Women, people of color, queer people and their allies can use the power of story and voice to change the world.” And a new book, just released, can tell you exactly what that means. 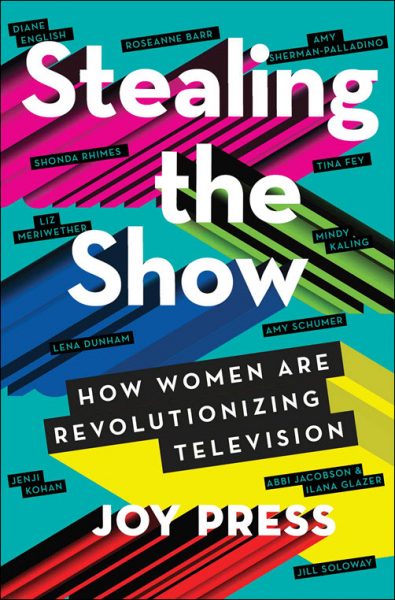 Soloway, an energetic and clarifying voice well known in LGBTQ advocacy today, is one of the most visibly empowered women focused on by Simon & Schuster/Atria Books author Joy Press in her new book Stealing the Show: How Women are Revolutionizing Television.

In an excerpt from the book, published by Literary Hub on Tuesday to coincide with the release of the book, Press writes about women showrunners and how Soloway “describes the TV industry as an ecosystem in which men in power traditionally surround themselves with writers and directors who share their basic worldview and make them feel comfortable.

“‘You can picture the older male director who hires the freshman director,’ says Soloway. ‘They are both wearing baseball caps, and he’s got his arm around the kid, and they know how to do this because they’ve both been on teams and they know how men mentor one another. So they are going to be chosen above a woman or a person of color or a queer person or a trans person.

“‘If you are a white straight guy who’s lived in the Pacific Palisades for the past 25 years and you bring a young trans director of color onto your set, you are not going to get to have that relaxed feeling of “Let me throw my arm around you and show you how things go.” You are going to be forced to confront your privilege.'”

Regular readers of Publishing Perspectives who have watched the rise of AmazonCrossing to the leadership position in translation houses under the editorial direction of PW Star Watch ‘Superstar’ Gabriella Page-Fort will know that the potential of the new Amazon-Solomon imprint is significant.

AmazonCrossing has broken the “genre barrier” and generated internationally popular translations of romance, science-fiction, historical fiction, and thrillers as well as the more common target for translation, literary fiction. This, combined with Amazonian sales power, has helped it widen the appeal of translations both in Crossing’s lucrative home market in the States and abroad.

Topple may well do the same for its multiculturally core content, creating a new space for the sort of inclusivity that has eluded other parts of the business. At a time in which parts of the traditional publishing industry are struggling to find their footing in a multiculturally aware entertainment context, the handwriting may be on the wall: a formidable new player in diversity-driven literature is here. And it can go straight to television.

APub’s publisher, Mikyla Bruder, is quoted in the company’s statement, saying, “Amazon Publishing and Little A are committed to publishing books from a diverse array of writers that inspire, connect and entertain. We look forward to sharing the voices and stories that Jill discovers with readers.”

And on Jill Soloway’s Topple Productions site, there’s a tab already for books. Click it and you’ll read: “Coming Soon.”

Many who work in the UK’s publishing industry—and many who cover elements of that industry for various international news media such as Publishing Perspectives—know Midas Public Relations to be among a small handful of top press agencies for books, the publishing industry, and its major players.

Today (February 28), co-founding chairman Tony Mulliken and co-founding CEO Steven Williams are announcing that Jason Bartholomew is joining the firm as joint CEO with to focus on developing new markets and services.

Bartholomew is moving from his role as rights director with Hodder & Stoughton, Headline Publishing Group, John Murray Press, and Quercus Books, as well as publishing director of Quercus Books US.

In a prepared statement, Williams is quoted, saying, “With Jason’s close knowledge of the needs of an ever-changing publishing industry, and with his knowledge of other arts and media sectors, we’re confident that his exceptional track record, his energy and his creativity, will enable Midas to achieve even a greater diversity and quality of our offering in the future.”

And Bartholomew is also quoted: “I have known Steven and Tony for some years and always admired the work of their company. With my long experience in the UK and US publishing worlds, allied with my contacts across other arts and media organizations,  I’m looking to build Midas into an even bigger brand than it already is.”

Bartholomew—the 2013 winner of the Frankfurter Buchmesse-sponsored Bookseller Industry Award for Rights Professional of the Year—is to leave his position with Hodder on May 31 and plans to start with Midas on July 1.