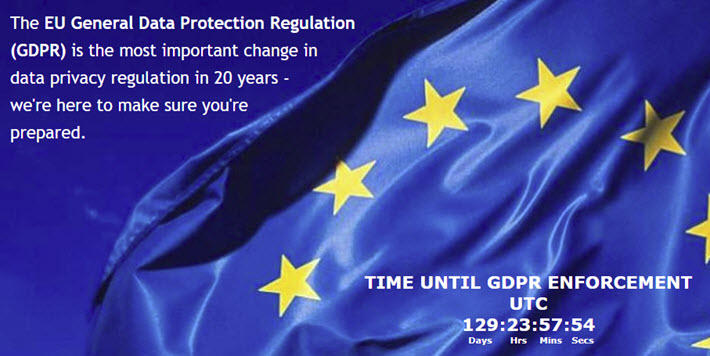 With ‘a lot of anxiety to many businesses as they grapple with the full implications’ of the European Union’s new data privacy regulations, the UK’s Publishers Association offers guidance to its member publishers. 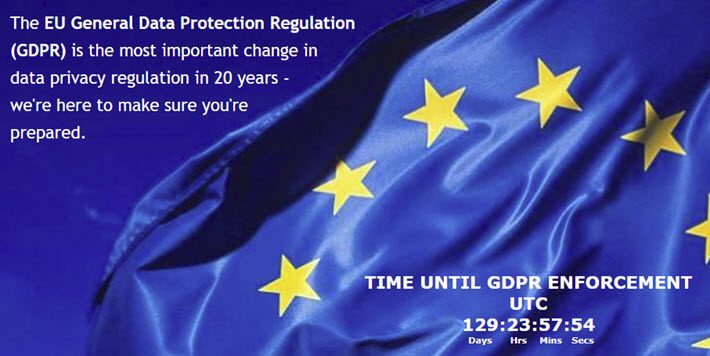 The European Union’s forthcoming General Data Protection Regulation (GDPR), at the time of this capture, comes into force in 129 days–as can be seen in the countdown clock on this site from Trunomi, one of many data-management vendors signaling the May 25 deadline. Image: eugdpr.org

‘The Processing of Personal Data’

The European parliament’s new General Data Protection Regulation (GDPR) goes into force on May 25, and will require the most extensive changes in how digital information is handled since their original iteration in 1995.

The Publishers Association (PA) in the UK released a new toolkit today (January 15) to help publishers comply with these changes. The toolkit includes “resources which have been developed for the PA by law firm Harbottle & Lewis together with technology consultancy Stigmergist [to] offer a full practical guide for publishers, outlining what they need to do to comply with the new regulations” in time for their May 25 enforcement.”

As evidenced by the graphic above from data-management vendor Trunomi, service providers in the field are wooing companies big and small to their expertise to help ease the transition.

As Matt Burgess reported in at Wired UK on Friday, the UK’s information commissioner, Elizabeth Dunham, has warned against “scaremongering” among nervous companies facing the transition, saying that the new data protection regime is “an evolution, not a revolution.”

And in summing up some of what has changed in these regulations, Burgess clarifies that the UK is putting into place a Data Protection Bill that “largely includes all the provisions” of the EU’s General Data Protection Regulation. He cites three key points as new for companies to handle:

PA Toolkit: ‘Outlining What Publishers Need To Do To Comply’

A starting point in the toolkit is a questionnaire that a publisher can use as a data review, as well as “template policies and contracts, guidance on data processing contracts and transferring data outside the European Economic Area.” Special attention has been paid to the needs of smaller publishers, according to information provided to the press.

In addition, “The toolkit will include a series of webinars with topics including an introduction to data protection and the GDPR, handling children’s data, data subject rights and data breaches.”

In a prepared statement, Publishers Association chief Stephen Lotinga is quoted, saying, “The upcoming changes to data protection laws in the EU are causing a lot of anxiety to many businesses as they grapple with the full implications.

“We want to make sure that all publishers can really get a handle on how they process data and will do whatever we can to support our members to help them prepare before these new regulations apply.

“We believe this toolkit will help the industry to take many of the practical measures necessary to ensure that they are compliant ahead of May 2018.”

What’s in the New GDPR?

You can see the text of the April 2016 legislation here, wherein we read the humanist underpinning of the effort laid out this way:

“The processing of personal data should be designed to serve mankind. The right to the protection of personal data is not an absolute right; it must be considered in relation to its function in society and be balanced against other fundamental rights, in accordance with the principle of proportionality.

“This Regulation respects all fundamental rights and observes the freedoms and principles recognised in the Charter as enshrined in the Treaties, in particular the respect for private and family life, home and communications, the protection of personal data, freedom of thought, conscience and religion, freedom of expression and information, freedom to conduct a business, the right to an effective remedy and to a fair trial, and cultural, religious and linguistic diversity.”

You can also see the actual directive that activates the legislation here.