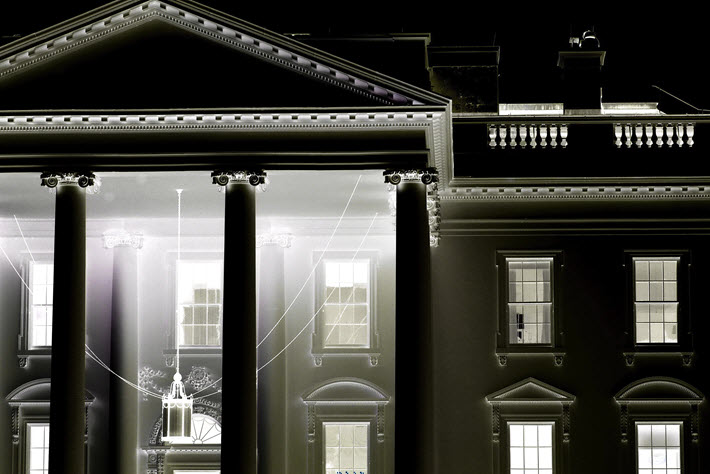 Taking all formats together, Holt is reporting 1.7 million copies of Michael Wolff’s book sold as the book leaps to No. 1 in the UK. 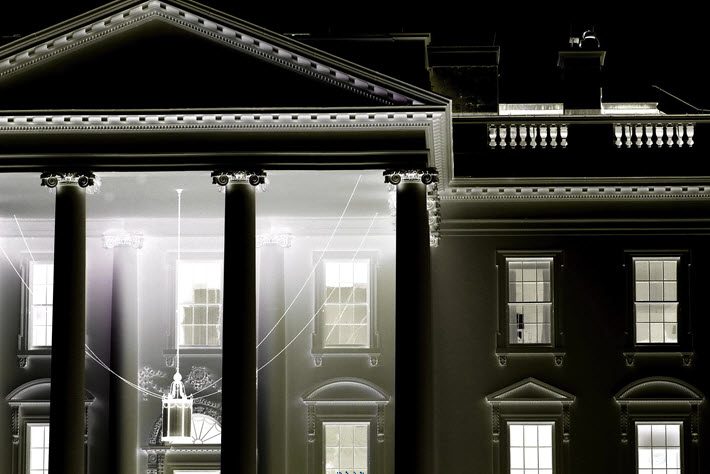 ‘The Inner Workings of a Monarchical Court’ 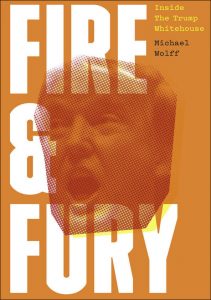 This is one of the alternate book covers for ‘Fire and Fury’ created for the Chicago Tribune. Matt Avery, graphic designer and owner of Monograph, designed this one

There’s not enough snow in Davos to cool the blazing sales charts of Michael Wolff’s Fire and Fury: Inside the Trump White House from Macmillan’s Henry Holt & Company.

Even as Donald Trump meets with business and geopolitical leaders at the World Economic Forum annual gathering in Switzerland, consumers and book industry observers are warming themselves by the new numbers that have rolled in this week on Fire and Fury.

The book was rushed out on January 5, four days ahead of its planned sale date, in a defiant response from Macmillan to the cease-and-desist letter Trump’s attorneys tried to use to derail the book’s release. That caused the book’s sales records to begin with a partial week in the USA, and what was deemed a pre-sale week in the UK.

After showing a fast advance in the two leading English-language markets in its first full week, the real scale of the demand for the book has begun to show up now in the numbers coming in from its second full week.

On Wednesday (January 24), in the States, Macmillan reported that it has sold 1.7 million copies of the book, comprising all formats.

NPD BookScan is citing some 324,000 hardcover sales in the week ending last Sunday (January 21), for a 69-percent jump over the first week of sales and what comes to a grand total, as reported by Jim Milliot at Publishers Weekly, of almost 555,000 hardcover copies sold at outlets reporting to BookScan since that January 5 kickoff date. (BookScan tracks about 85 percent of the print book retail landscape.) The book has gone through 22 printings already.

To fully appreciate the magnitude of these numbers in the American market, Publishers Weekly is charting Fire and Fury at No.1 in the overall list, with 544,581 total units. The No. 2 book, Dav Pilkey’s Dog Man and Cat Kid (Dog Man 4) from Graphix is coming in with 79,210 total units. Dog Man has been on the list for five weeks, Fire and Fury, technically, for three. 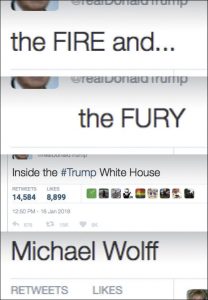 This alternate cover for Fire and Fury for the Chicago Tribune is by Isaac Tobin, who designs books for the University of Chicago Press

As Michael Cader writes at Publishers Lunch, Holt is talking about having 1.5 million print copies in the market. Cader also looks at wholesaler Ingram to see some 43,000 copies on order and 7,200 copies in inventory, “after selling about 47,500 to their customers.”

In terms of international rights sales, James Pullen at the Andrew Wylie agency in New York tells us that there’s one new one to report, Lithuania’s Tyto Alba. The remainder (more than 30) sales can be found in our report here.

In the UK, the book actually missed the No. 1 spot in its first full week, running smack into the new year dieters, who threw their weight behind Tom Kerridge and his Lose Weight for Good.

But in the second week? What diet? Fire and Fury, published there by Little, Brown, “has blazed into the UK Official Top 50 No. 1 spot,” writes The Bookseller’s Kiera O’Brien, “ousting Tom Kerridge’s Lose Weight for Good (published by Absolute) and selling 41,202 units for £620,851 (US$881,099), according to Nielsen BookScan’s Total Consumer Market (TCM).

She also points out, however, that even at the lesser price, the book is “in rarified company: only three No. 1 bestsellers have racked up a £15-plus a.s.p. before—Jamie Oliver’s Happy Days with the Naked Chef and 30-Minute Meals (Michael Joseph), and Michael Palin’s Sahara (Orion). None has done so in the first six months of the year.”

In our look at coverage around the news of Google Play introducing audiobooks, it’s interesting to see that the audio edition of Fire and Fury is among titles in the limited-time $10-or-less offer for just $8.99. (The audiobook, from Macmillan Audio, is voiced by Wolff and Holter Graham.) The audiobook list price is $27.99, while the hardcover in the States is at $17.99 at Amazon.com, and the Kindle edition holding steady at $14.99.

A ‘Family Drama at Heart’

As publishing industry watch with fascination, maybe some envy, the progress of the book, Cambridge professor of politics David Runciman wrote an article for The Guardian that underlines the satisfaction many have mentioned about seeing a bookish event at the heart of the news. In his analysis, “Could a Book Bring Down a President?“, he gets at the singular conundrum of the Trumpian portrait Wolff has painted this way:

“In Trumpworld, the great unknown is the president himself. That places Wolff’s book in a different and much older tradition, where writers expose the inner workings of a monarchical court.

“Family drama is at the heart of Fire and Fury because no one can understand quite what they are doing there–it’s as though an act of God transplanted a dysfunctional property mogul into the most powerful job in the world, leaving everyone else to make of it what they can.

“His caprice becomes their opportunity. People with no previous connection to Washington, such as his daughter, suddenly find themselves with extraordinary power, if only they could think of something to do with it.

Meanwhile, Wolff’s title has become a transcendent meme. You may remember that it’s Trump’s own phrase, spoken during one of his early threats against North Korea. Some of us might have argued for another favorite Trumpian mantra—”the likes of which the world has never seen”—but no one can doubt that this is one well-selected title, now stuck like a bad pop refrain in the culture’s consciousness.

Like the “shock and awe” of the Iraq invasion, “fire and fury” has become the go-to line for a vast range of things, as evidenced in headlines such as “Women Are Ready to Rain Fire and Fury on Trump” (Washington Post); “Fire and Fury in Cancer Cells and Politics” (Healio); and “We Asked Designers: What Does ‘Fire and Fury’ Look Like to You?” (Chicago Tribune).

That last one is related to a point we picked up on in our last write-up about the book, too: the dissatisfaction of many with the book’s ham-handed cover art.

As Christopher Borrelli writes at the Tribune, the paper lookrf at what it describes as those “tat red letters, a portrait of a president in mid-snarl, stale backdrop,” and asked some Chicago-area designers what they might suggest as an answer to Meryl Sussman Levavi’s cover, created under the design direction of Rick Pracher at Henry Holt. You’re seeing some of the proposed covers that came in, in this story. 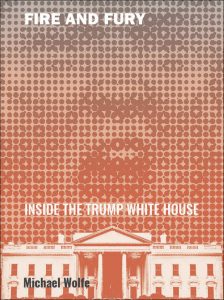 Henry Holt publisher Stephen Rubin on Wednesday (January 24) sent a memo to the staff, informing them that John Sterling, the editor-at-large on the Fire and Fury project, is “stepping back from full-time work for the company so he can devote most of his time to starting a new career in politics.”

Rubin writes, ‘As of April 1, he will work part-time and edit a small number of his authors and acquire only the occasional book. Any of you who know John, and admire and respect him as much as I do, will have to acknowledge that his choice of a new career focus is shrewd and apt.”

Sterling arrived in 1998, John Sargent’s appointee as president and publisher of Henry Holt, and as Rubin’s generous memo makes clear, he’s had profound impact on the house’s progress.

“Since becoming an editor at large for Macmillan in 2009,” Rubin writes, “John has edited numerous bestsellers, including Benjamin Black’s The Black-Eyed Blonde, Richard Price’s The Whites, Jimmy Carter’s White House Diary, Del Quentin Wilber’s Rawhide Down, Rick Atkinson’s The Guns At Last Light, Elizabeth Warren’s This Fight Is Our Fight, and Michael Wolff’s Fire and Fury.”

However Sterling moves forward in his pathway to politics, it seems he can count on a lot of votes from the Macmillan group.

All of our stories on Fire and Fury at Publishing Perspectives can be found here.