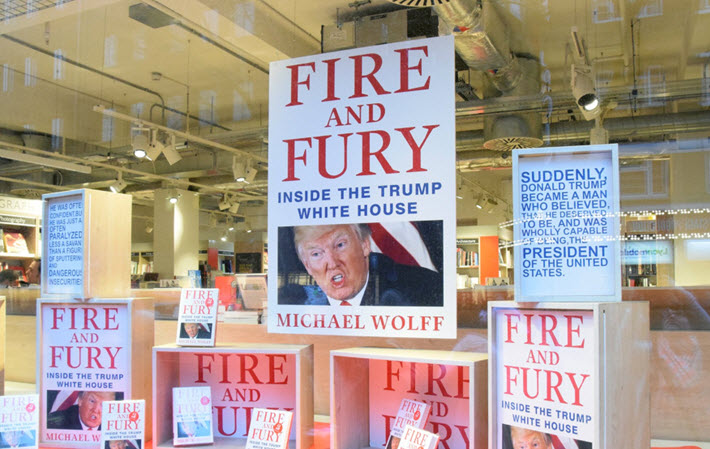 As Macmillan’s Henry Holt announces an 11th printing for ‘Fire and Fury—bringing the order to 1.4 million hardcover copies—Andrew Wylie’s offices fill us in on international rights sales already in place. 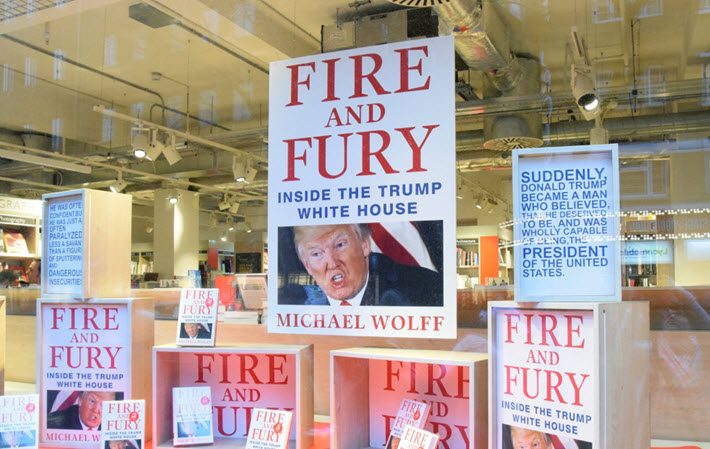 Eleven More Agreements Are in Negotiation

Late today (January 11), Macmillan’s Henry Holt & Company has released a statement noting that in less than a week, Michael Wolff’s dramatically controversial Fire and Fury: Inside the Trump White House has gone into its 11th printing for a total order of 1.4 million hardcover copies in North America. By the end of the week, the statement says, the company will have shipped more than 700,000 copies.

Fire and Fury debuts on January 21 as the No. 1 nonfiction title on The New York Times‘ bestsellers list, which is based on only its first two days of sales. It’s also to be the No. 1 title on the Times‘ combined print and ebook list.

Henry Holt president and publisher Stephen Rubin acquired the book from Andrew Wylie’s literary agency and negotiated for North American rights to the book, which was edited for Holt by Macmillan’s John Sterling.

Publishing Perspectives has been in touch with the Wylie offices to learn about international rights sales of the book.

There, James Pullen—one busy man this week—is handling international rights sales of Fire and Fury, and has provided us with a list of languages/territories and publishers to which overseas rights have so far been sold:

Pullen reports that he now is in negotiation on at least 11 more deals, and we’ll update those for you as news of them becomes available.

Meanwhile, the UK’s Waterstones, like Foyles, has been enjoying the consumer interest in the book, on Friday (January 5) with the following tweet, and (bel0w) a tweet today showing a window display of pertinent Americana.

Early copies of Fire and Fury may have flown off the shelves for now but you can pre-order for next week PLUS we have plenty more on The Greatest Presidential Reading List in History https://t.co/wW44iHg6Qf pic.twitter.com/U2u9KhgA3X 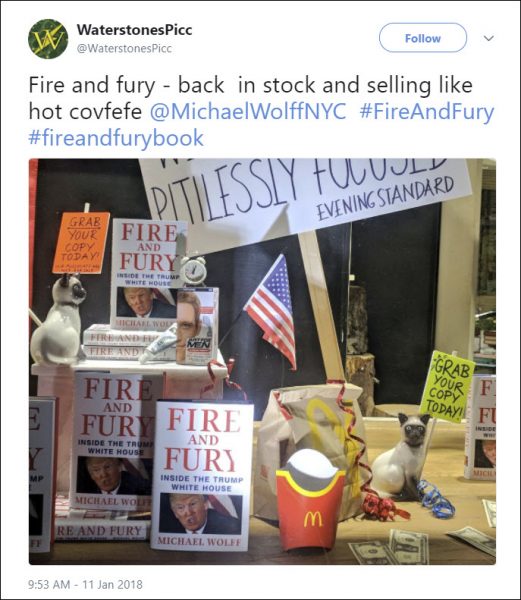 At the Waterstones flagship Piccadilly store in London, the staff is displaying ‘Fire and Fury’ with packaging from one of the president’s favorite fast food chains and says the books are selling “like hot covfefe.” Image: Tweeted by: @WaterstonesPicc

In the UK, sales numbers won’t be available until January 16. Nielsen UK is treating the week ending January 6 as pre-publication because many British retail outlets didn’t get first copies to sell until Tuesday of this week, January 9, according to The Bookseller’s Kiera O’Brien.

Even as they await their first numbers, however, The Bookseller’s Katherine Cowdrey is bracing the industry with early figures from the States where Publishers Weekly’s Jim Milliot is reporting NPD BookScan figures showing that 28,567 print copies sold in the book’s first two days (January 5 and 6, and note, as usual, that BookScan’s numbers cover between 80 and 85 percent of all print sales). In the UK, as we’ve reported, Little, Brown is the publisher scrambling to move copies to outlets as fast as possible.

Those numbers made the book the top-selling title of last week, and NPD’s Kristen McLean told the Associated Press’ Hillel Italie (carried here by the Washington Post) that the distribution issues (of both a suddenly accelerated release and severely challenging winter-storm weather) will mean we need to wait before a better picture of these early days at market comes into focus. Amazon.com still is reporting wait times of “two to four weeks” for hardcovers on US orders at $19.99 each, with the Kindle edition at $14.99.

On January 10, Macmillan CEO John Sargent told Italie at the AP that 250,000 digital copies of the book had sold. These numbers were “likely boosted by the scarcity of the hardcover edition,” she writes. Audiobook sales, she reports, have surpassed 100,000.

Michael Cader at Publishers Lunch today (January 11) is estimating that “something on the order of 650,000 hardcovers [had been] sold through or backordered by Monday” (January 8). He’s basing that on Sargent’s comments that more than a million copies had been sold in print and digital formats. As Cader puts it, “putting exact parameters on sales to date” of the book “remains a moving target” as we wait for clarity.

Briefly, you’ll remember that the reason the book was rushed to stores on January 5–four days prior to its scheduled sale date–was Donald Trump’s lawyers’ cease-and-desist letter, an attempt to intimidate Macmillan’s Henry Holt & Company from publishing the book. Macmillans Sargent defied that letter, speeding up the book’s release. And Macmillan’s attorney’s now have made their legal response to Trump’s attorneys: there will be no halt of publication and no apology.

International book industry players have been thrilled by Macmillan’s bravura resistance of Trump’s efforts to quash the book, while getting a textbook lesson in just how the freedom to publish can be attacked by a political ploy in a market that many might have thought would be immune to such authoritarian efforts, the United States of America. 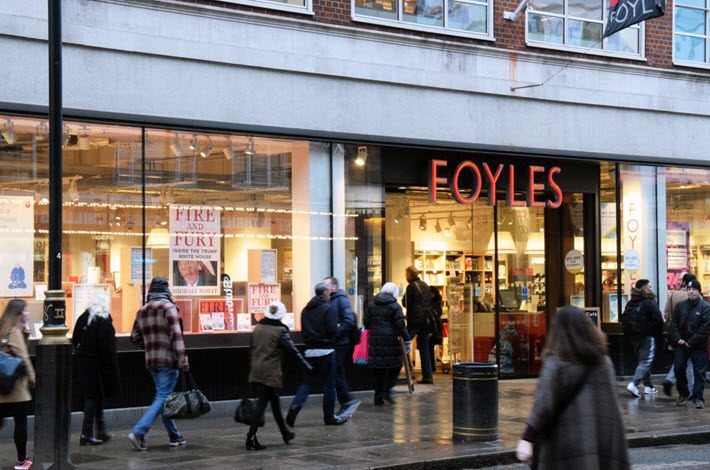 On a rainy Charing Cross on Thursday, Londoners pass Foyle’s flagship store, its windows blazing with the bookstore chain’s display of ‘Fire and Fury’ hardcover copies for sale. Image: Tweeted by @Foyles

In London, the staff at Foyles’ flagship store in Charing Cross has been enjoying the moment, tweeting on Wednesday (January 10) “The eagle has landed” as its first stock went on display.

Today, the store is trumpeting its window display on Twitter (the appropriate medium, of course) with a pivotal bit of Wolff’s text from early in the book on display:

“Suddenly, Donald Trump became a man who believed that he deserved to be and was wholly capable of being the president of the United States.”

Trump caused more jaws to drop on Wednesday when in a live televised pool spray in the White House Cabinet Room, he just as suddenly launched into an announcement that he’d be taking a “strong look” at American libel laws. Trump said: 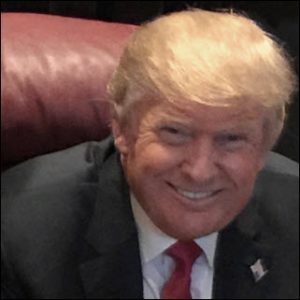 “We are going to take a strong look at our country’s libel laws, so that when somebody says something that is false and defamatory about someone that person will have meaningful recourse in our courts. If somebody says something that’s totally false and knowingly false, that person that has been abused, defamed, libeld, will have meaningful recourse.

“Our current libel laws are a sham and a disgrace and do not represent American values or American fairness.

Observers agree that Trump’s impetus here was the Wolff book, as CNN’s Jim Acosta said on the domestic network’s Inside Politics immediately after the president’s comments. (You can see Trump make his libel-related comments in this CNN video.) “Of course, [Trump would] run up against something called the First Amendment and the Constitution of the United States, which obviously would not allow that to occur.

“We would be remiss if we didn’t say that while he was a citizen, a businessman, he repeatedly spread the falsehood that Barack Obama, the previous president, wasn’t born in the United States. So  obviously the president complaining about the Michael Wolff book, Fire and Fury, and some of the reporting that’s come out of it that wasn’t very positive about him or his administration.”

It’s in the 1964 case New York Times Co. v. Sullivan that the US Supreme Court established that “actual malice” is a standard that must be proved in a defamation or libel case in which the plaintiff is a public figure. That landmark decision is the essential foundation of the States’ internationally recognized libel laws.

And regular readers of Publishing Perspectives will have noted a certain, perhaps comforting irony in the fact that Pullen at Andrew Wylie’s agency is handling international rights sales of Fire and Fury.

In June, we published our interview with Wylie ahead of his keynote address at Frankfurt Book Fair’s The Markets conference. In our interview, Wylie took pains to point at precisely the political influences that brought Trump to power and have been buffeting other cultures in the world. He called on the book publishing industry to hold inviolate its internationalist stance and to defend the freedom to publish. 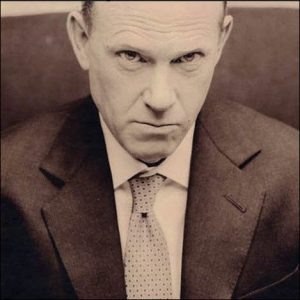 “Is it justifiable to be nationalist?” Wylie asked in that interview. “Is that a satisfactory equation for an individual as well as for a society? The answer is a resounding, ‘No. It’s not.’

“The rise of nationalism, including in the United States, but also through Europe and even in Asia, has underscored the importance of internationalism—as a subject and as an approach to the markets for the publishing community and for writers.

“This has been coming for a while, although it arrived as a great surprise to many people. The seeds of it have been planted earlier.

“So I think publishers have anticipated this and have acted against it, the larger publishers becoming more international in their approach, not only to their business but also to the books that they publish. There’s a concerted effort underway in the United States for the publication of more writers from around the world, both in other languages and in English. And I think that other countries are looking at the world from an international perspective as well as a national perspective.

“The publishing world, and writers, are at odds with the nationalist agenda.”

Many publishing industry figures with whom Publishing Perspectives have been in touch both inside the United States and internationally have mentioned how pleased they are to see a book moving so powerfully through the world’s news cycles.

And more from the international scene: Kim Hjelmgaard at USA Today is reporting that North Korean’s state media today have praised the book for “foretelling Trump’s political demise.”

Hjelmgaard reports, “North Korea’s Rodong Sinmun newspaper said in a commentary that robust sales for the book reflected ‘rapidly surging anti-Trump sentiments in the international community…[The] anti-Trump book is sweeping all over the world so Trump is being massively humiliated worldwide [and] voices calling for the impeachment of Trump are on the rise not only in the United States but also abroad.” 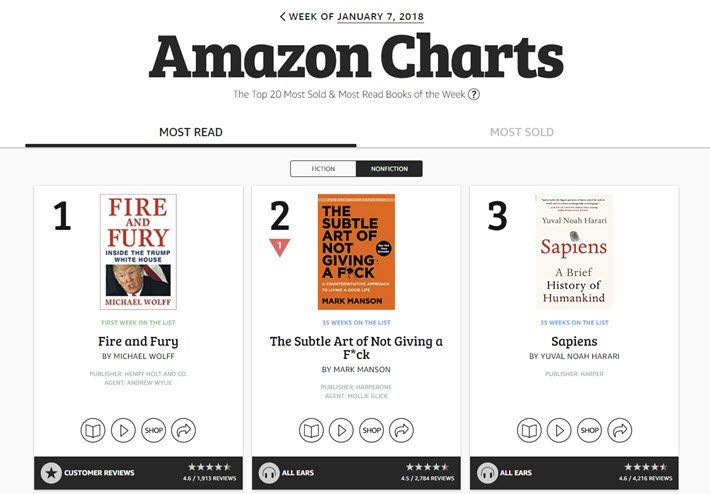 Amazon Charts–which track both sales and actual readership of Kindle ebooks–put ‘Fire and Fury’ in the No., 1 spot in both read and sold nonfiction for the week of January 7