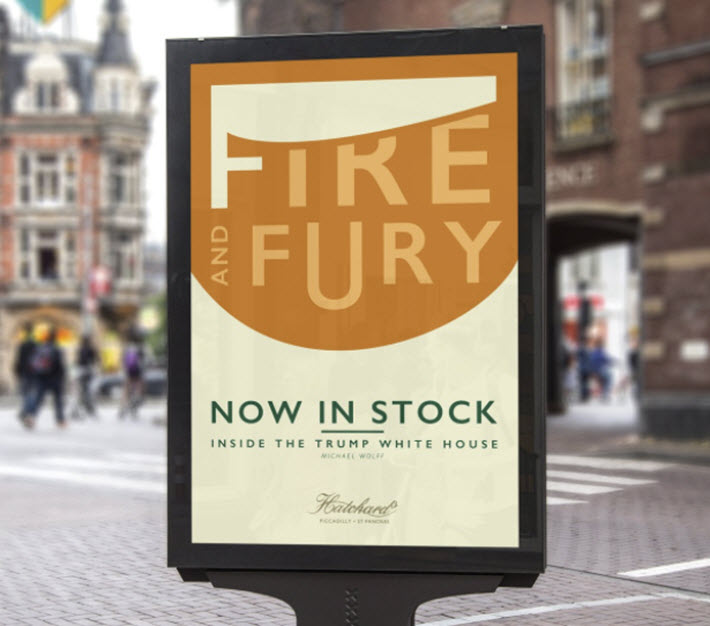 As ‘Fuego y Furia’ is readied by a Planeta team of translators for Vintage Español’s North American Spanish edition, ‘Fire and Fury’—now listing as ‘in stock’ at Amazon.com—smokes the competition. 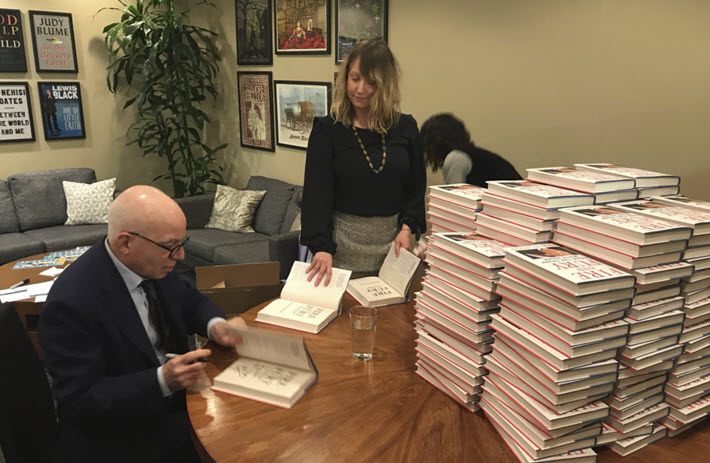 ‘Flying Off the Shelves’ 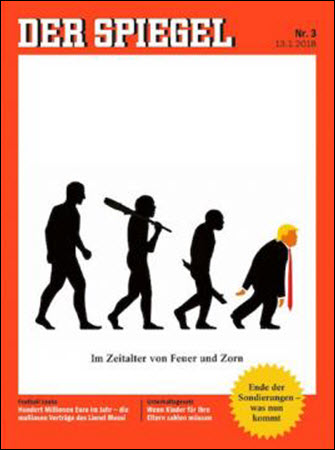 Propelled into world recognition by Donald Trump’s attempt to stop it—isn’t there a Bookseller of the Year award we can offer him?—Michael Wolff’s Fire and Fury: Inside the Trump White House from Macmillan’s Henry Holt & Company has quickly gathered big sales.

The book, which was rushed into publication on January 5, is now at Number 1 on today’s United States NPD BookScan charts with a total 191,826 units sold. The nearest contender, Dav Pilkey’s Dog Man and Cat Kid (Graphix, the fourth in the Dog Man series), holds the second spot with 26,936 units.

These Fire and Fury units reported to date are the leading edge of what we’ve noted earlier is the publisher’s announcement that a total of more than 1.4 million copies have been ordered.

Wolff’s book has pushed unit sales for the entire category of adult nonfiction up by 14 percent compared to the same week last year. On the wider market, Publishers Weekly reports that Fire and Fury sales put the week ending January 14 ahead of the comparable week in 2017 by 9 percent. The book, says the article, “generated most of its sales through the retailer and book club channel; fewer than 1,000 copies were sold via the mass merchandiser/other channel.”

International attention has been robust, to put it mildly, with Der Spiegel‘s deputy editor-in-chief Susanne Beyer in Germany explaining the artwork for its cover story on the book: “Humanity as a whole is being set back just because of one single person. Where is the world supposed to start again if it manages to survive Donald Trump?”

James Pullen at The Wylie Agency has updated us on what now is a basket of more than 30 foreign rights deals:

Bookstores are working their social channels to announce their stock of the book, and many readers are enjoying showing off their copies with selfies. The Chicago-based registered nurse and contract clinical research associate who appears on Twitter as @statcra on Sunday (January 21) tweeted out this shot: 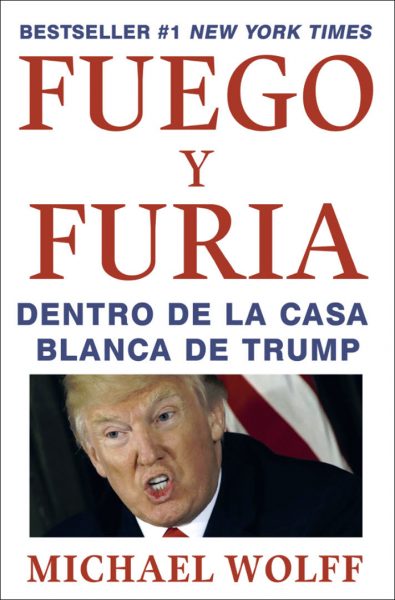 We have a date now of February 28 for the release of the Spanish-language edition for North America from PRH’s Vintage Español—Fuego y Furia: Dentro de la Casa Blanca de Trump. And in response to an inquiry from Publishing Perspectives about who might be the translator, a company spokesman has responded that Vintage is working with Planeta and using a team of translators.

And in the UK—the other leading English-language market that started selling the book on that accelerated January 5 schedule—the annual new year’s rush to the diet-book section kept Fire and Fury in its first week from hitting the No. 1 spot, with Tom Kerridge’s Lose Weight for Good coming out ahead.

“But after a shortage of hardback copies in bookshops over the weekend,” wrote The Bookseller’s Kiera O’Brien, “readers hungry to learn all about Donald Trump’s McDonald’s habit turned to the digital shelves. The book, described as ‘really boring and untruthful’ by its subject, blazed into the Weekly Ebook Ranking No. 2 spot” in the UK, where the book is published by Little, Brown.

O’Brien makes it all the more impressive this way: “It should be noted that the weekly ebook chart runs a week behind the print data, and this chart covered the week ending 6th January. So Fire and Fury achieved the number one spot with just two days’ worth of ebook sales.”

And there’s more: “Like the print edition,” she writes, “which was flying off the shelves for an average selling price of £17.30 (US$24), Fire and Fury’s digital list price of £13.99 (US$19.33) is a whopper. Nonfiction Number Ones are rare in the ebook chart, but none has cost more than £4.99, and while three titles have hit the number one spot with a £16.99 price tag, they were all hardback fiction releases from big brand authors.”

Can it only be a week since Trump pronounced Wolff “a mentally deranged author”?

So much Fake News is being reported. They don’t even try to get it right, or correct it when they are wrong. They promote the Fake Book of a mentally deranged author, who knowingly writes false information. The Mainstream Media is crazed that WE won the election! 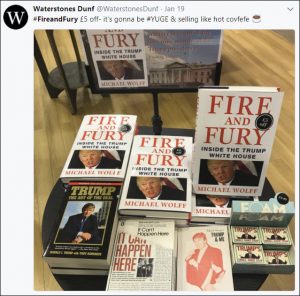 Another Waterstones bookstore in the UK gets into the “selling like hot covfefe” line we spotted earlier at Waterstones Piccadilly. This display is in Scotland’s Dunfermline. Image: Tweeted by @WaterstonesDunf

Fire and Fury also has cinched something more than the chart-topping sales: watercooler icon status.

For example, The New York Times editorial board on Saturday (January 20) published its latest update to its “Republican’s Guide to Presidential Etiquette.” In its explanatory introduction of this scathing series, the board wrote, “As part of our continuing effort to resist the exhausting and numbing effects of living under a relentlessly abusive and degrading president, we present, for the third time in nine months, an updated guide to what Republicans now consider to be acceptable behavior from the commander in chief.” And then: “And no, we’re not even opening that Michael Wolff book.”

Of course, nothing grabs the West Coast’s attention like a book with such long legs that it’s into second- and third-level memes. So it is that The Hollywood Reporter’s Lesley Goldberg and Andy Lewis have reported that Endeavor Content, “the financing and sales arm formed in October between sister companies William Morris Endeavor and IMG,” has bought television rights to the book for a TV series adaptation. Wolff is to be executive producer and another producer reportedly attached to the project is Two Cities Television’s Michael Jackson of BBC and Channel 4.

As Frank Scheck writes in his follow-up to the news of a series, “The mind reels with the possibilities for who could play the most unlikely characters in American political history.”

And long before anyone trots down a red carpet for playing one of those unlikely characters, Trump’s own “Fake News Awards”—not an event but a posting at the Republican National Committee’s GOP.com website—were noticed most, if at all, for the fact that they didn’t mention “that Michael Wolff book.”

But for traction, you can hardly beat the fact that even as Capitol Hill nosedived into the government shutdown that now has everyone blaming everyone, Politics and Prose Bookstore on Connecticut Avenue in Washington, DC, was wooing Women’s March participants with a ready inventory of those signed copies:

Feeling shutdown this weekend? Why not pick up a signed copy of #FireAndFury by @MichaelWolffNYC to pass the time. pic.twitter.com/0JDvuqJoyB

“No network is attached yet, but it’s a pretty safe bet it won’t be Fox.”Frank Scheck, The Hollywood Reporter

More seriously, as publishers watch Fire and Fury burn and rage in controversy and bestseller charts, it’s useful to consider Margaret Sullivan’s column at the Washington Post from shortly after the book’s appearance. It’s headlined “‘Fire and Fury’ proves an often-forgotten rule: Don’t assume ‘we’re off the record.’”

Many players in publishing, of course, find themselves speaking to members of the press, and it’s often striking how unaware they can be of the rules of the road in journalistic encounters. Wolff has been quoted for a comment he made in his first major television interview about the book on NBC’s Today: “I said whatever was necessary to get the story.”

As Sullivan writes, “Even people who should know better about spilling their guts to a reporter often don’t.”

So here’s a very quick couple of points to remember when you’re talking with reporters.

Meanwhile, publishing figures have wasted no time in attaching their names to their favorite moments from Wolff’s work. Here’s London’s Jonny Geller at Curtis Brown with one:

This line in #fireandfury reminds me of the joke:
Man goes to shrink.
“You’re crazy”
“I want a second opinion”
“You’re ugly, too”. pic.twitter.com/oJcaDIxuWV

And we’re willing to go on-record saying that for all its enviable success, Fire and Fury does have, as Sian Cain wrote at The Guardian, a cover that’s “so ugly.” No offense intended to designer Rick Pratcher, Cain seems comfortable with the explanation that political books are designed this way as a rule, “an overwhelming tendency toward Helvetica, and nary a picture in sight. Most of them, as covers go, are best likened to dry toast.”

Publishing Perspectives asked James Pullen at Andrew Wylie’s office what he’s expecting in terms of covers for the many international editions ahead. His answer (as you might expect from the Vintage Español design): “So far all international publishers are using the US cover design.”

In case dry toast is not to your liking, we leave you with one option, a poster designed by artists at Orphans Publishing for London’s Hatchards bookstore.

This poster was created to alert passersby to the fact that London’s oldest bookshop, Hatchards, has copies of ‘Fire and Fury.’ It was created by designers at Orphans Publishing and was tweeted by @OrphansPublish