The conference in its third year has instituted a new book trailer award with a shortlist of 30 videos designed to entice consumers to various publishers’ titles. 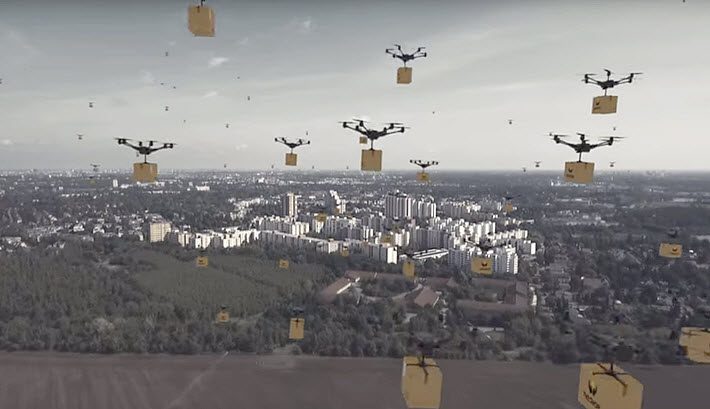 Book Trailers: A ‘Most Suggestive Way’ To Lure a Reader

The conference, in its third year, has seen close to 300 attendees—primarily publishers, booksellers and service providers—to present, learn about, and share information on “mindflow, workflow, and networking.”

The award has a rather long shortlist of 30 book trailers. It’s a great collection of short videos to explore, even if you don’t speak German.

For example, fans of the Amazon’s drone delivery of the future may enjoy the trailer for Marc Uwe-Kling’s Willkommen in QualityLand, shows what appears to be a squadron of package-toting drones bearing down on a sunny city.

From Suhrkamp Verlag, you’ll find a much more sinister and edgy treatment for Der Drogendeal (The Supplier), and there’s a scary little self-writing email scene in the trailer for Unter Birken (Under Birch Trees) by Philipp Schmidt from Ferge Verlag.

Here’s  one for Lindsey Lee Johnson’s Der gefährlichste Ort der Welt (The Most Dangerous Place in the World) from DTV.

‘The Fascination for the Cinema’

These 30 trailers were selected by a jury from more than 160 submissions.

Thanks to the participation of Berlin’s Canadian embassy and Ontario International’s Munich Trade and Investment office, Toronto-based Ashleigh Gardner, the head of Wattpad Studios, will be making the keynote address at the conference on the 25th. Gardner is one of some 50 speakers scheduled to appear at the conference, including Digital Publishing Report’s Steffen Meier, attorney Ralph Oliver Graef, Carlsen Verlag’s Ute Noeth, Eco-Institute’s Jens Gröger, and Holtzbrinck’s Juliane Reichwein.

The conference program is here, and is being promoted by PR agency Literaturtest, which has worked with the Frankfurt Book Fair Guest of Honor markets such as the 2016 Flanders and The Netherlands program.

Future! Publish expects its book trailer competition to become an annual fixture at the conference, writing in its promotional materials:

“Film is one of the most suggestive ways to draw attention to authors and their books. The fascination for the cinema seems unbroken, moving image is one of the most popular formats on the web. Authors, publishers, and bookstores have long since discovered the topic for themselves. For the first time, the book trailer will receive an appropriate consideration.”

And while book trailers have been written off by some in the English-language markets as expensive and rarely effective marketing tools, it will be interesting to see if award can help highlight the potential of book trailers more clearly.

Ahead of Ashleigh Gardner’s keynote address, you might enjoy reading some of the reading trends that her team at Wattpad has surfaced recently on its platform, which is actively engaging more than 60 million users monthly.