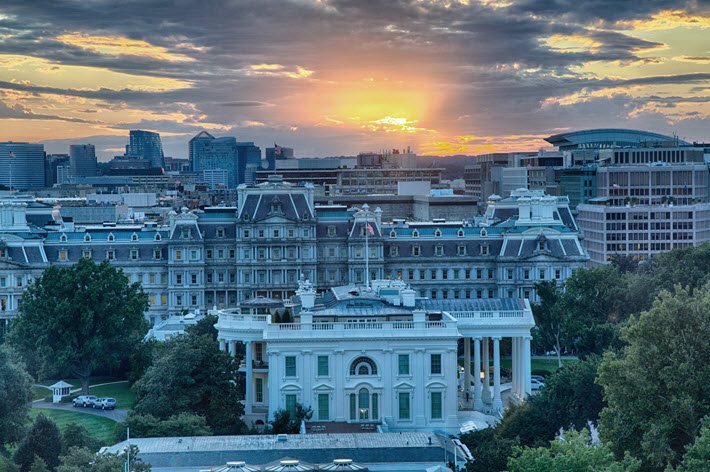 ‘A sad irony to see the so-called leader of the free world trying to limit freedom to publish.’ The International Publishers Association slams the Trump cease-and-desist effort and libel law comments as ‘a new and worrying development.’ 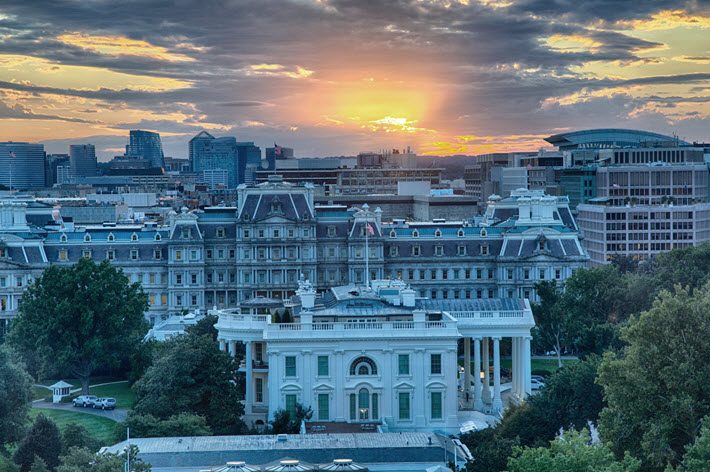 The White House, from an unusual angle looking toward the Eisenhower Executive Office Building from a nearby rooftop. Image – iStockphoto: Gary Tognoni

‘Fire and Fury’ Joined by New ‘Works of the Resistance’

Shortly before announcing its 2018 Prix Voltaire shortlist of candidates for its annual freedom-to-publish award, the International Publishers Association’s secretariat in Geneva has issued the following statement in support of US publisher Macmillan to publish Fire and Fury by Michael Wolff, despite objections from the White House:

“The International Publishers Association has thrown its full support behind US publisher Macmillan and its CEO John Sargent for their firm stand in the face of pressure from United States President Donald Trump to halt publication of Fire and Fury, Michael Wolff’s book on the Trump White House.

“The IPA sees Trump’s attempt to stop publication of Wolff’s book as a new and worrying development for the USA, a longstanding bastion of freedom of expression.

“Although it is clear that the US Constitution protects Wolff and his publisher, it is of grave concern when a US President seeks to interfere in the publication of a book, as he has in this case. It demonstrates the importance of a strong legal framework that enshrines freedom of expression as fundamental to democracy.”

In a prepared statement, IPA secretary general, José Borghino, is quoted, saying, “It is a sad irony to see the so-called leader of the free world trying to limit freedom to publish.

“The US has always been a beacon of freedom of expression around the world and we stand unequivocally with John Sargent and Macmillan publishers in their refusal to bow to this pressure.”

Borghino’s comment is coupled with one from Kristenn Einarsson of the Norwegian Publishers Association and IPA Freedom to Publish committee chairman, who says, “Freedom to publish is an essential part of any democracy but it is a fragile thing in some places in the world.

“We need to be eternally vigilant about unexpected threats like this, and support those who stand firm in the face of intimidation.”

The IPA statement also recognizes the earlier commentary from the Association of American Publishers, in which president and CEO Maria A. Pallante is quoted, saying, in part, “While it is understood that some books will be unpopular, upsetting, or even threatening to some audiences, the Supreme Court has long recognized that prior restraints strike at the very heart of our democratic ideals and are presumptively unconstitutional.

“In most cases, the circumstances are such that the author has a right to write, the publisher a right to publish, and the public a right to read.

“The relative value of a book to the public is a legitimate part of the debate, but may only reveal itself over time.”

Of course, author Wolff hardly has had smooth sailing as his US publisher, Macmillan’s Henry Holt, produces what it says is 1.4 million hardcover copies of the book. Running the gauntlet of weekend news shows in the United States, he ran into a stiff challenge from CNN’s Michael Smerconish on the techniques Wolff used to ingratiate himself to a White House staff he went on to depict as squabbling, confused, and strained to the limit in trying to handle Trump.

“It is a sad irony to see the so-called leader of the free world trying to limit freedom to publish. The US has always been a beacon of freedom of expression around the world and we stand unequivocally with John Sargent and Macmillan publishers.”José Borghino

And Susan Glasser at The New Yorker has produced an instructive essay on Wolff’s distance from Washington culture and ways in which this contributed to the smaller missed points that some insiders feel compromises parts of the book’s impact.

None of which seems to be slowing down Canadian interest in the book, according to the Toronto Star‘s David Rider, who writes that by Thursday afternoon (January 11), “there were 2,287 names on the waiting list to borrow a Toronto Public Library copy” of Fire and Fury. So heavy is the demand that Toronto’s library system, Rider writes, has ordered 330 print copies and 150 ebook editions–in edition to the 29 copies it now has in circulation.

All is not held up in the Canadian market, however, as Samantha Schmidt writes in the Washington Post, where sales have picked up for a 10-year-old book by the University of Toronto’s Randall Hansen: Fire and Fury: The Allied Bombing of Germany, 1942-1945.”

Trending This Week: ‘Books of the Resistance’ 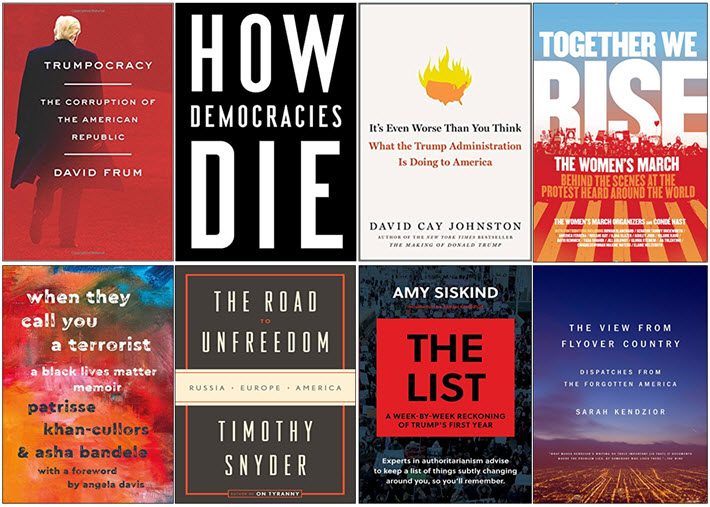 The titles on the top row above, as well as Patrice Khan-Cullors’ ‘When They Call You a Terrorist’ all have January 16 releases. Timothy Snyder’s ‘The Road to Unfreedom: Russia, Europe, America’ and Amy Siskind’s ‘The List’ comes out April 3. Sarah Kendzior’s ‘The View From Flyover Country’ has an April 17 release date 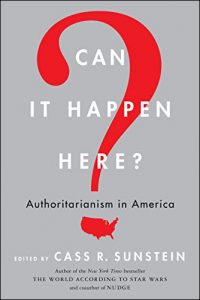 In terms of market play, the rising alarm around the Trump administration’s first year has produced a clutch of books being released on Tuesday (January 16) relative to the issues.

As the Associated Press’ Hillel Italie writes (here carried by the Washington Post) “At The Booksmith in San Francisco, they’re trying to keep up with all the anti-Trump releases and other works of the ‘resistance.'”

Italie describes this trend: “The rise of Donald Trump has been mirrored by an expanding literary genre that will intensify in 2018, with dozens of new works expected, on top of the dozens from last year. Books of ‘resistance’ will include guides to activism, reflections on democracy, investigations of Russian interference in last year’s election, and legal analysis, along with poetry and fiction.”

Indeed, this “expanding literary genre” includes another title not in our collection above, Can It Happen Here? Authoritarianism in America by bestselling Harvard professor Cass R. Sunstein is scheduled for March 6 from Dey Street. 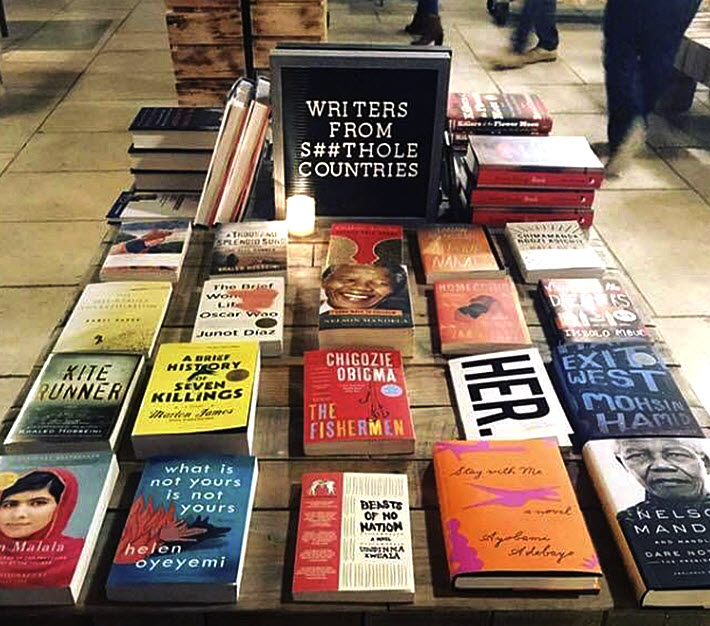 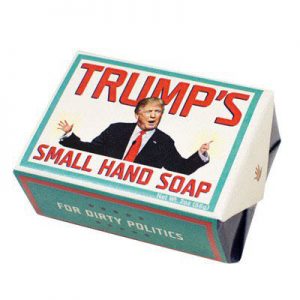 Coming soon to the Waterstones flagship bookstore in Piccadilly Circus

Trump’s racist commentary in a bipartisan meeting on immigration late last week–in which two senators who were in the session say he referred to Haiti and African nations as “shithole countries”–triggered a quick groundswell on social media, and especially on Trump’s favorite platform Twitter, of beautiful images from many parts of the world, hashtagged by a defiant #myshithole.

“We hope that by highlighting these authors and their stories,” the store’s staff writes on its Facebook page, we can demonstrate the talent and beauty that comes out of these different regions of the world, and encourage visitors to our little shop (and on social media) to step out of their comfort zones and learn more about them.”

No good deed goes unchallenged these days, of course, and when the bookstore had some customer commentary about the use of the offensive term being less than uplifting, the store responded by replacing its sign with one saying “E pluribus unum” and a pledge to donate 100 percent of sales on Monday–Martin Luther King Day in the United States–to the International Rescue Committee.

And meanwhile, you might recall our mention on Friday of the Waterstones Piccadilly window display that included McDonalds fast food packaging and a tweet about Fire and Fury “selling like hot covfefe.” The store has followed up by letting us know that it expects an order soon of another item it will add to its flagship store’s window display: A bar of Small Hand Soap, “for dirty politics.”