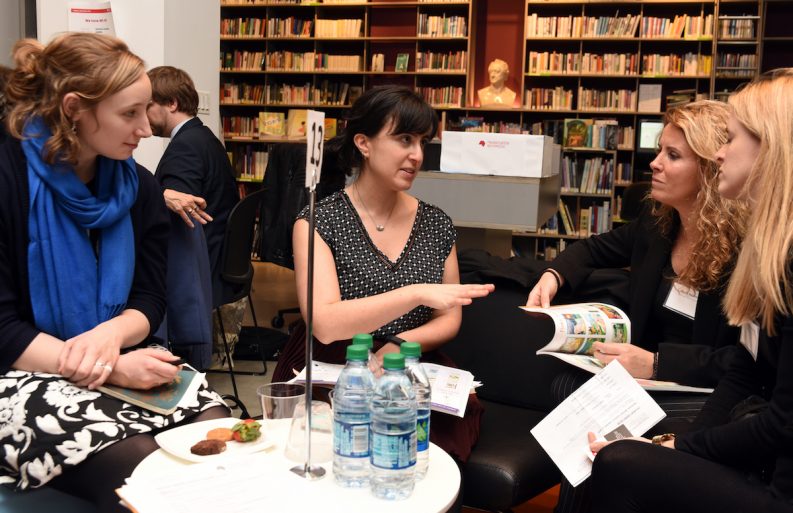 Close to 30 international publishers are spending two days in New York City to meet with US editors and publishers in the first Children’s Books Salon from Frankfurter Buchmesse New York and Publishing Perspectives. 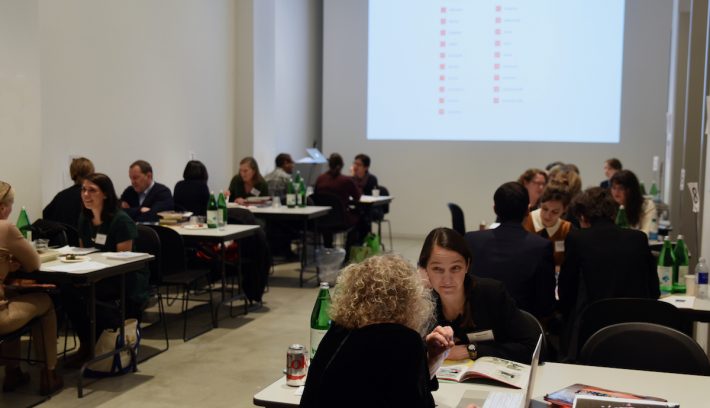 At New York’s inaugural Children’s Books Salon on Tuesday (January 23), close to 40 US acquiring editors and publishers met with roughly 30 publishers from Canada, Finland, China, Germany, Norway, Spain, Sweden and the Netherlands. The Children’s Books Salon was devised as a way for the visiting international publishing professionals to meet their counterparts in the United States, to learn about new authors, and to find out more about what the Stateside editors are looking for in buying rights.

Produced by the Frankfurter Buchmesse New York and Publishing Perspectives, the first day of the event was held in the library of the Goethe-Institut, where publishers heard presentations and had one-on-one meetings to talk about new titles and trends in their respective markets. Today (January 24) the visiting international editors will go to the New York offices of Scholastic and Penguin Random House. The program has additional support from the Federal Foreign Office of Germany.

Exchanges of information yesterday ran from issues of how editors gather information about their young readers—often including the input of librarians and teachers—to what level of engagement they tend to have in terms of social-media marketing of their titles and how much of a role. In this regard, for example, HarperCollins’ Martha Mihalick told the group that using social channels to support a book isn’t uncommon, particularly with teen readers, but that such efforts have more to do with sheer enthusiasm for the work than marketing intent.

The library quickly became packed with colorful books for kids in myriad languages as the visiting publishers’ offerings went on display, and the more non-English titles were on view, the more pertinent the advice of the American editors became: a generous sample translation of a book is essential in attracting American interest, especially when so many US editors today are emphasizing author’s voice and strong writing as a key draw to a work.

And in one predictably strong area of current interest, Canada’s Margie Wolfe from the socially conscious Toronto publishing house Second Story Press asked if there’s any data yet to indicate what impact the US political climate might be having on children’s book sales. 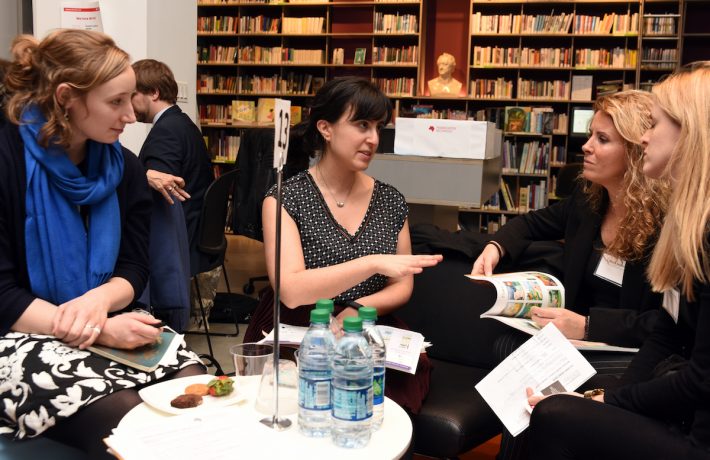 To kick off the day, NPD BookScan’s David Walter provided a comprehensive overview of the children’s book market that included several key points publishers are factoring into their decisions.

For example, Walter broke out three cultural markers in these turbulent political times:

And the kinds of consumer-response trends Walter said NPD’s research is tracking include:

In terms of growth areas, Walter pointed to the remarkable advances of children’s comics and graphic novels, representing a compound annual growth rate of 32 percent since 2014 in NPD’s tracking. 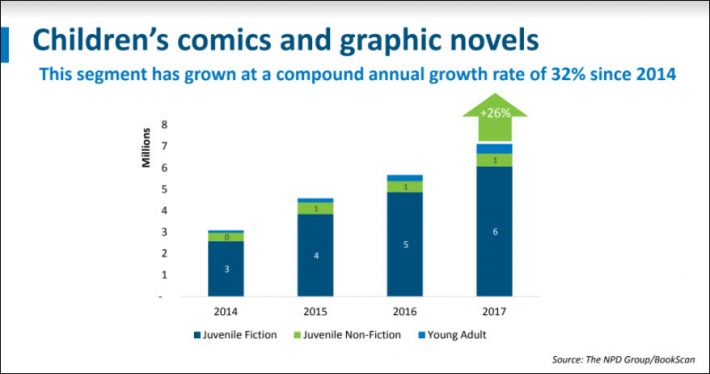 And, per the question from Toronto on political elements of thematic development, Walter reported that NPD is seeing the fantasy/dystopian series trend of past years gradually giving way to higher interest in social situations, frequently having to do with family and health issues, people and places, and, yes, interpersonal relations. 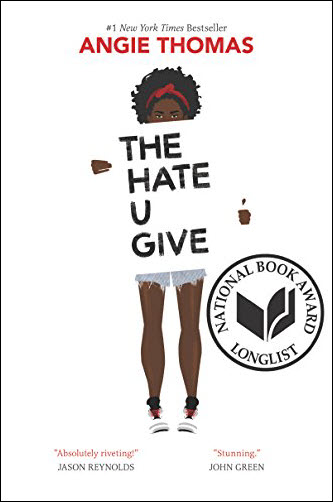 In this regard, it was instructive to hear HarperCollins’ Kristen Rens refer to the value of Angie Thomas’ The Hate U Give, for example, a National Book Award longlisted title, and to take note of Walter’s view into how backlist growth is stronger at this point than frontlist.

In nonfiction, Walter said, there are ongoing interests in coding, wind energy, science and digital programming, but at no point was the day far from such comments as Caitlyn Dlouhy’s observation from Simon & Schuster’s Atheneum that “I look for voices. I look for unsual ways of telling stories, rather than a traditionally told tale.”

The message: getting the interest, the thematic focus, is important, but so is the delivery: good storytelling and compelling writing remain powerful keys to the market from girl power entries to the emerging hard-edged themes of YA, video games, and history.

Speaking of what’s compelling, one of Walter’s most eye-opening graphics was about another ind of impact, that of JK Rowling in the market. In 2016, he told the group, Rowling’s work contributed an extra 4.8 million units over what was sold in 2017. 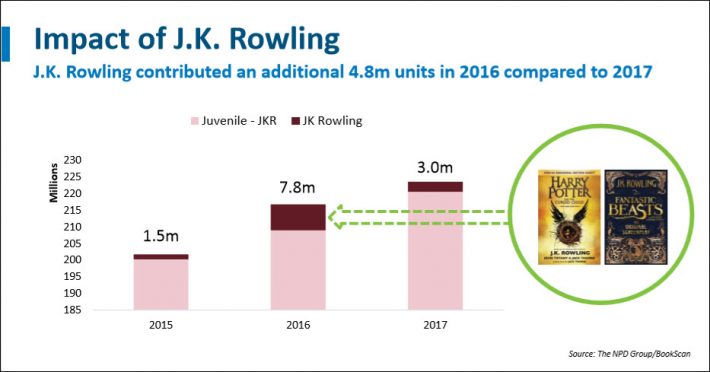 And for those interested in seeing adjustments in recent years of the shares of ebooks, not only in children’s and YA work but also in adult fiction and nonfiction, Walter’s presentation included a look at the change from a 28-percent share overall in 2013 to a 2017 overall share of 21 percent. 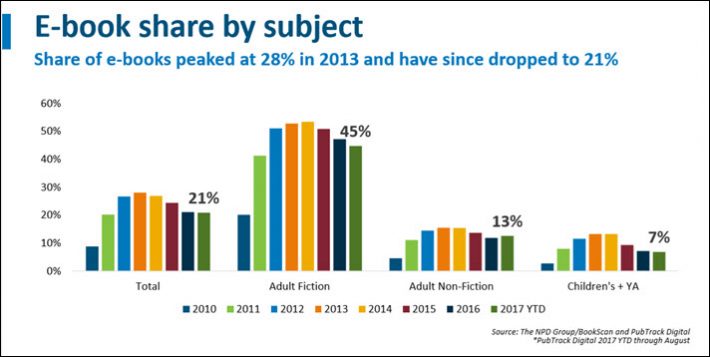 ‘Making Up for Lost Time’

From Kain Wojtyla’s viewpoint at Simon’s Margaret K. McEderry Books and her team’s shared comments on the importance of realistic fiction these days with emotional journeys, sometimes unreliable narrators, and twisting plots, the picture grew.

And the Macmillan team pointed to submissions today that feature the stories of strong women in history whose contributions have needed to come to light—diverse voices in a US market that’s “making up for lost time,” as one member of the group put it, by comparison to the longtime activity of many European publishers in multicultural content for children and YA. 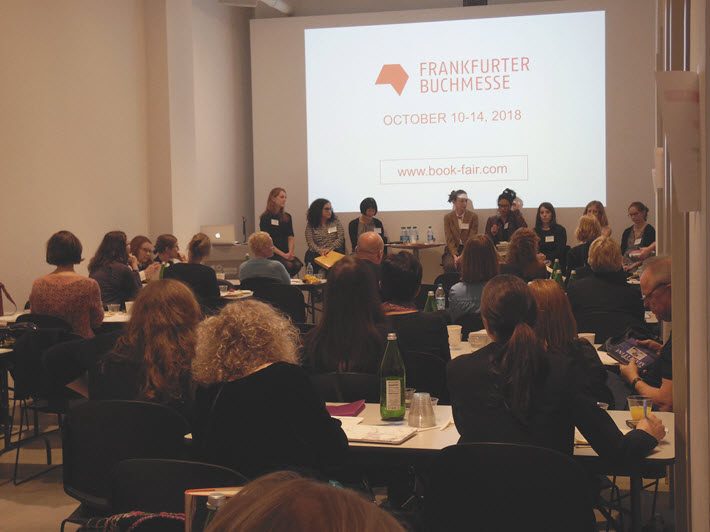 Listening to a team of editors at the first Children’s Books Salon in New York City. Image: Porter Anderson

Feiwel and Friends’ Treehouse books from Andy Griffiths have been strong sellers in the difficult teen boys’ market, the Macmillan team said, and FSG’s Grace Kendall told the group that if looking at a book from Germany, what she’d like to find is a strong, authentic voice reflective of German points of view, something resonant with its own culture to present to her own.

Overall, these were the themes of a long and energetic day at this first iteration of the  Children’s Books Salon.

Hours of one-on-one “speed-dating” sessions between the visiting rights directors and American publishers left the crowd ready for a drink at the evening’s reception but much more deeply versed in what works from many points of reference in a complicated market and in an era of social and political conflict.

More on the Children’s Books Salon is here. 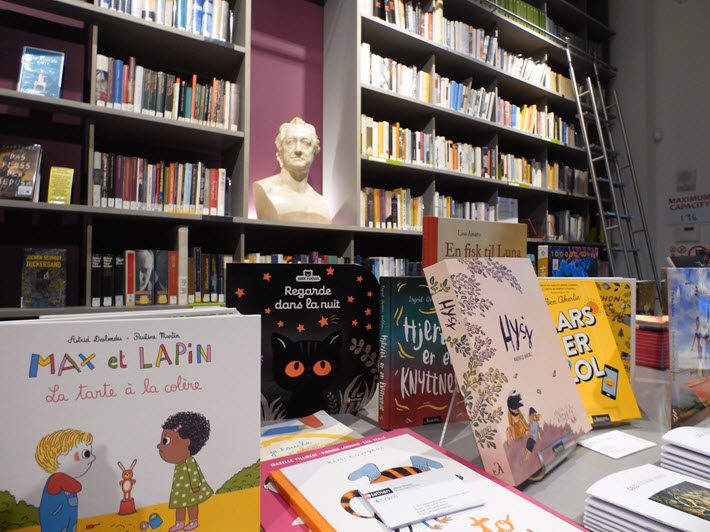 At the Goethe-Institut. Image: Porter Anderson