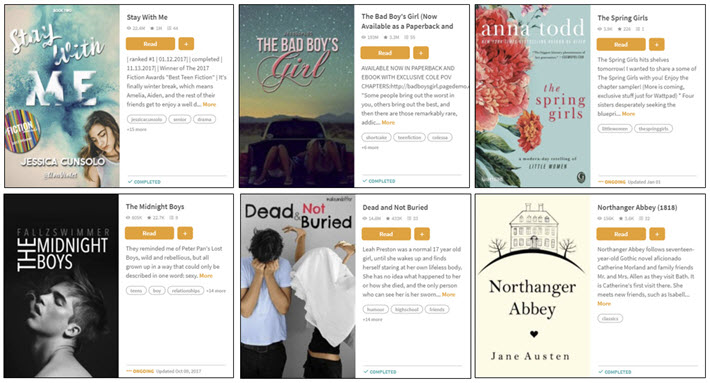 The platform’s community, according to media information, grew in 2017 by more than 40 percent and now draws more than 65 million users monthly to its system, which supports more than 50 languages. 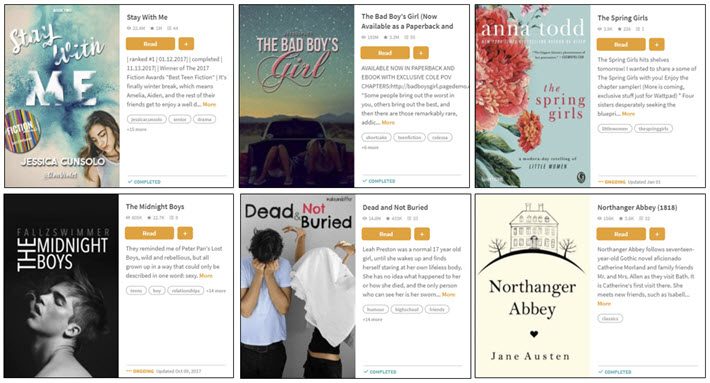 Clockwise from upper left, some of the leading reads on Wattpad’s platform today are by writers known on the site as: Jessica Cunsolo, Blair, Anna Todd, Jane Austen, makeandoffer, and Ali Novak

China’s Tencent Is a New Investor

The new money is to be used, according to press materials from Wattpad offices in Toronto, to “support continued investment in machine learning and interactive storytelling, expanding the company’s global entertainment footprint in TV, film, digital media, and publishing as it adapts Wattpad stories for new formats, and other innovations. The company also plans to grow its team across all departments.”

In a prepared statement, co-founding CEO Allen Lau is quoted, saying, “Entertainment is in a period of disruption, and how people find and experience stories is evolving.

“With our global community of users, hundreds of millions of stories, and data-driven approach to helping people and partners find great content, Wattpad is leading both sides of this equation.”We empower diverse storytellers all over the world, helping them build a community of passionate readers; at the same time, we also connect Hollywood with stories that have massive built-in audiences.

“This new funding from Tencent and our other investors shows that confidence in our vision is growing alongside our revenue, our success and our community.”

As Publishing Perspectives has reported, Wattpad is beginning to serve as a guide to publishing industry players on its mostly-millennial user base’s interests and trends, even as it develops new partnerships with trade publishers and other various media including film and television companies through its Wattpad Studios wing.

And the company, in issuing its press notification of its new funding, is taking the opportunity to add a set of the kind of numbers this enormous reading-and-writing platform has become known for racking up.

Quoting today’s statement from the company:

Of course, with tech companies come tech issues, and it’s perhaps mildly amusing that Wattpad is running a notice on the site this week about an upcoming four-hour upgrade for 10 a.m. ET (3 p.m. GMT) during which the operation will be in read-only mode with its writing functionality disabled.