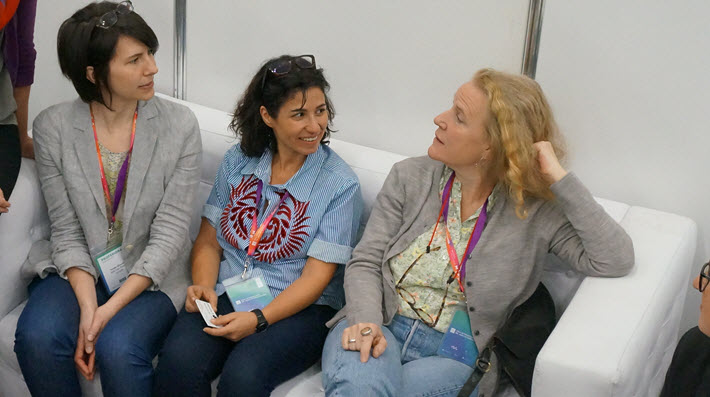 ‘A Contrast of Themes’

The Guadalajara International Book Fair’s Rights Exchange is a fellowship program for editors from countries in which Spanish is not the official language.

Set in the immensity of the Guadalajara fair, the exchange welcomes children’s publishers every third year, with adult fiction publishers being featured in the intervening two years. Publishing Perspectives collected some impressions from participants and organizers at this year’s fair, which closed early this week.

We began by looking for some background from Rubén Padilla Cortés, who directs Guadalajara’s professional programming, including the Rights Exchange.

Publishing Perspectives: How did the professional program of the FIL get started?

Rubén Padilla Cortés: The fair is a big festival open to the public. And it also has its Rights Exchange. This double programming is what sets us apart from some other fairs.

When the time came to develop a business angle, the fair took timely decisions that appeared natural and obvious at the moment. For example, the fair was initially created in November to coincide with the American Thanksgiving holiday so that librarians from the United States, who have a budget to spend, would have ample time to come down and select books.

The Rights Exchange program has celebrated its ninth year in 2017. Each year, it becomes better known, and generally we receive anywhere from 55 to 80 applications.

The program was born when we realized that there was a desire from smaller international publishers to participate in the fair but they didn’t have the funds to send someone. We pay part of the flight as well as the fellows’ lodgings, and we and organize a schedule of meetings and discoveries for them. 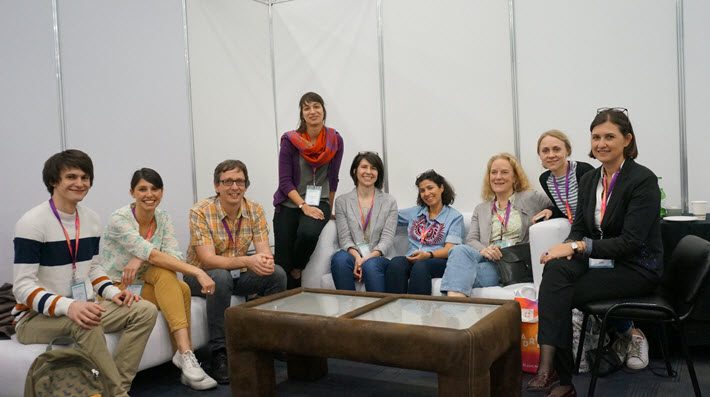 Drawing some of the fellows into the conversation, we were curious to get their first impressions and thoughts about what they found in Mexico.

PP: What are your impressions of the program and what does your agenda look like?

“The most interesting part of this program is being in a group all the time because we can share our thoughts and our impressions with our colleagues and not only have an impression of the Mexican market but of the world.”Isabel Lopes Coelho

Yvette Ghione, Kids Can Press (Canada): We’ve attended numerous activities including the opening ceremony, luncheons, and met with publishers and other key members of the book industry.

We’ve attended groups sessions in which publishers give us information on their country’s publishing program and present their titles. And we’ve had to do the opposite as well, [in sessions] where we present our own markets and houses to one another.

Svein Størksen, Magikon (Norway): I’m specializing in picture books and I’m delighted to see that illustrations here are at a high-quality level and quite poetic. The books correspond to some of the preferences in our country and in Europe.

Isabel Lopes Coelho, FTD Educação (Brazil): Since we’re all children’s publishers, we have the same references and know the same authors. We understand immediately what the goal is in presenting them.

The most interesting part of this program is being in a group all the time because we can share our thoughts and our impressions with our colleagues and not only have an impression of the Mexican market but of the world.

PP: It’s interesting that you mention that–what are the world trends that you see shaping children’s publishing today?

Isabel Lopes Coelho:  Well, there is, of course, a variety of books and illustrations and also a contrast of themes. For example, we can see many books about immigration and people displaced in the world–which reflects on how much global movement is going on.

Sarah Odedina: The theme of migration is definitely a worldwide trend. There’s a great concern that’s shared by children for the plight of people in the world.

Publishers are really responding to those concerns and trying to publish works that explain and try to help humanize these stories that are basically headlines–numerous and anxious political situations.

Esra Okutan, Sarigaga Books (Turkey): The trend that I saw last year was girl power, and now the father figure is becoming more powerful, I find. Turkish society and Asian countries are trying to get the father more involved in children’s care.

Rubén Padilla: From the organizers’ perspective, we’ve seen an internationalizing trend at the fair.

Our objective three or four years ago was to bring in Nordic countries such as Sweden and Norway to make this an even more representative fair of the international markets. We’re now starting to have success, for example, this year with Svein Størksen from Magikon in Norway. Next we’re aiming at an Asian expansion, and we have some representation already with Taiwan and Korea, but we can certainly continue to grow the presence of Asian countries.

However, after the 2008 economic crisis, Latin America gained a bit of independence and power even within transatlantic publishing houses that were present on both continents. People here started moving toward greater professionalization. 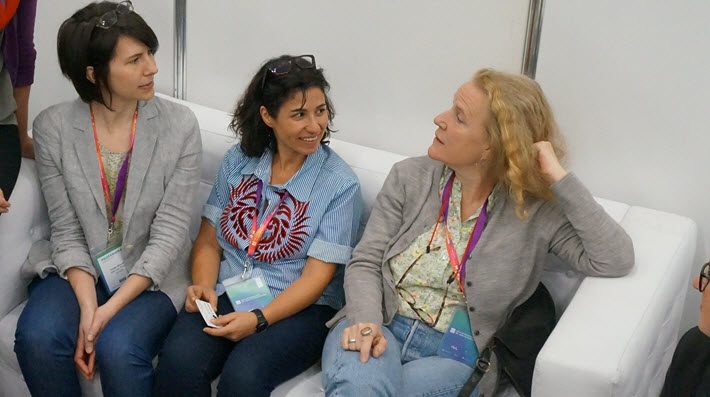 ‘Independent Publishers Have Such an Important Role’

“The trend last year was girl power, and now the father figure is becoming more powerful. Turkish society and Asian countries are trying to get the father more involved in children’s care.”Esra Okutan

PP: How many publishers who participate in the fair’s Rights Exchange come back?

Rubén Padilla: We’ve calculated that more than 40 percent of publishers who participate in the exchange do come back. Maybe not the year after, but in subsequent years they come back when they realize what’s here and the value of the fair, the industry’s size, and opportunities in Guadalajara. Really, that’s our endgame, to be the capital of the Spanish-speaking book industry, to be able to receive the world in Latin America.

PP: And from a publisher’s perspective, what’s different about the Guadalajara fair?

We communicate, we collaborate, we’re collegiate and this will continue after the fair.

Joanna El Mir, Samir Éditeur (Lebanon): Yes, between small publishers, buying and selling rights can go much faster, it can be more fluid.

Yvette Ghione: They’re encouraging publishers to make connections at every turn here. There’s the threat of dance lessons (laughs), and attending different cocktails. And tequila, of course. Tequila is the secret weapon.